In this canny and ingeniously crafted action thriller, Jet Li glows with a quiet, unquantifiable something -- and he kicks butt. 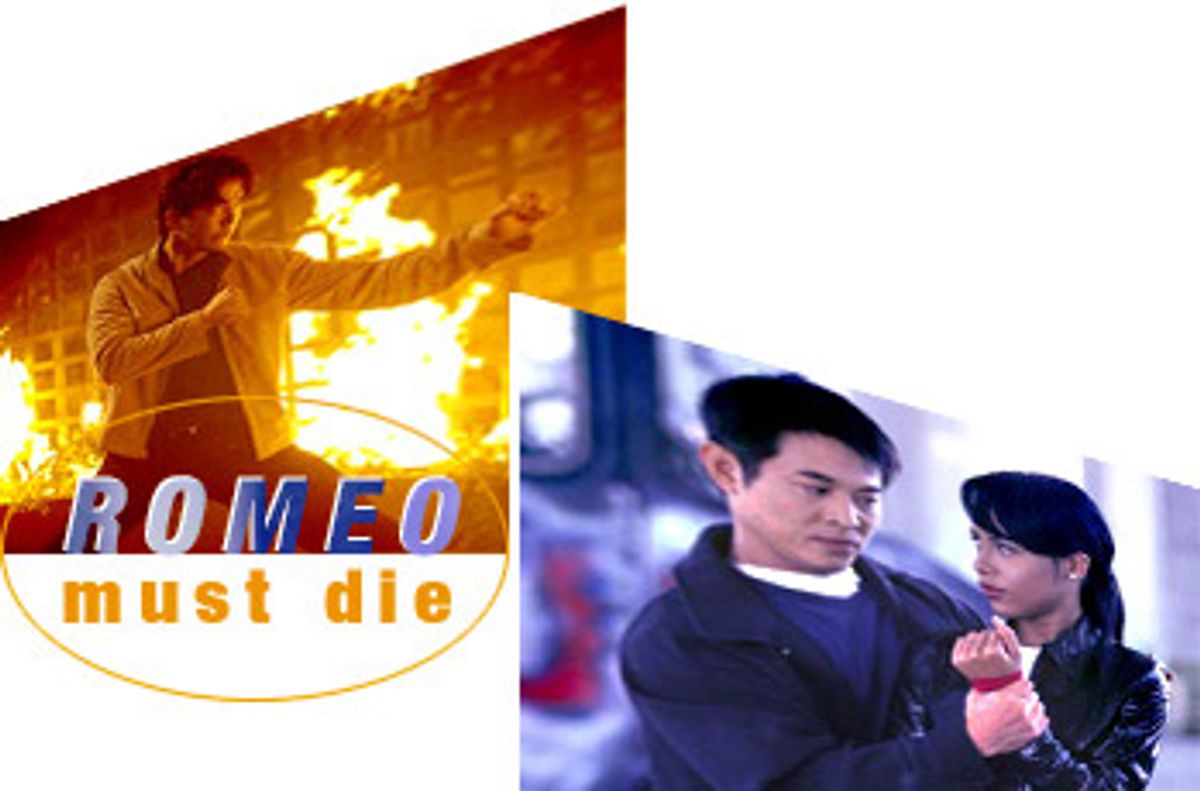 If Jackie Chan is the Charlie Chaplin of martial-arts movies, then Jet Li is the Fred Astaire (and Jean-Claude Van Damme is, I don't know, the Shemp Howard). A compact little guy with almost feminine features, Li combines explosive force with balletic precision in his fight sequences, but his characters can seem shy, lonely, easily wounded. Chan is a pratfalling goofball, always eager to be liked, but Li has an almost standoffish Garbo quality about him, a little mystery. Like his idol Bruce Lee, Li possesses a quiet, unquantifiable something -- maybe it's the immanent energy in his modest frame -- that makes him the undoubted star of everything he appears in.

Maybe "Romeo Must Die," Li's first film as a Hollywood leading man, is not quite "Once Upon a Time in China" or "Swordsman II" or any of the other early-'90s Hong Kong classics that made him one of Asia's biggest box-office draws. But taken on its own terms, as a high-gloss entertainment that blends the new-jack-gangster genre with the Asian martial-arts extravaganza (and throws in a few high-tech effects out of "The Matrix"), it's effective enough. Packed with no fewer than eight major fight scenes -- featuring perhaps the most outrageous stunt work of Li's career -- "Romeo Must Die" has only a few slow stretches where its pedestrian mob-warfare plot and uneven acting are likely to make its audience restless.

In fact, of Hollywood's various efforts to emulate the Hong Kong filmmaking style, this is surely the cleverest. Polish-born director Andrzej Bartkowiak, making his debut in that role after a long career as a cinematographer, has the right neon-tinged palette and the right obsession with surfaces and textures: Italian fabrics, good crystal, rich leather, fine-grained wood.

Bartkowiak may have his name on the film, but one suspects the real auteur here is producer Joel Silver, a longtime fan of Hong Kong actioners. It was Silver who packaged Li with young R&B chanteuse Aaliyah, commissioned an up-to-the-instant hip-hop soundtrack from Stanley Clarke and Timbaland, and brought in Bartkowiak, who had worked with Li and martial arts coordinator Corey Yuen on "Lethal Weapon 4," another Silver project.

There's no point pretending that the result of Silver's machinations is a classic of cinematic art; "Romeo Must Die" is more like a yeasted-up combination of a music video and a beer commercial than a real movie. But Bartkowiak and company have certainly spent Silver's money where you can see it, and Li's core fans will be gratified to see their hero blaze to Hollywood glory in what's likely to be a monster hit.

By the time Han Sing (Li) escapes from a Hong Kong prison -- by vanquishing five guards while hanging by his ankles from a torture-cell ceiling -- the canned gangland yarn of "Romeo Must Die" is well in motion. Han's father, Ch'u Sing (Henry O) and the black crime lord Isaak O'Day (Delroy Lindo) are battling for control of the Oakland, Calif., waterfront, and perhaps also to cash in on the city's new NFL expansion team. (Yes, sports fans, in real life Oakland already has a football team, but then, except for a few establishing shots, the whole movie was shot in Vancouver anyway.) In a stylishly photographed nightclub brawl, Han's playboy brother Po Sing (Jon Kit Lee) is murdered, and Isaak and Ch'u Sing end up on the verge of all-out war.

While Eric Bernt and John Jarrell's script (from a story by Mitchell Kapner) could have been written by a software program loaded with three decades of organized-crime films, "Romeo Must Die" is packed with charismatic and talented performers who consistently make it better than it ought to be. Lindo is especially good as the patriarchal, patronizing Isaak, who genuinely believes that the deepening spiral of violence he's locked into is for the good of his son, Colin (D.B. Woodside), and daughter, Trish (Aaliyah).

Like all movieland crime lords, Isaak and Ch'u Sing each have a sinister, Iago-like lieutenant who claims loyalty but is really more interested in No. 1, and together they nearly steal the show. Wearing little metallic shades as the bemuscled, thoroughly Americanized Kai Sing, Russell Wong cuts a dashing, Keanu-like figure; and as the smooth operator Mack, Isaiah Washington (so good in last year's Oakland film, Clint Eastwood's "True Crime") is all sharklike brutality and catlike street smarts.

So Han gets to Oakland eager to avenge his brother, and of course runs into Trish almost immediately, not knowing that her dad is the likely agent of Po Sing's demise. Working with all these good actors makes the undeniably charming Aaliyah, in her first film role, seem perfectly adequate, but it also means she tends to disappear into their shadows. Trish is supposed to be a rebel who opened her own hip-hop clothing boutique to escape from her father's empire, but Aaliyah seems so squeaky-clean and obedient you just know she'll come scampering home the moment Lindo gives her one of his glowering, furrowed-brow looks.

Combine Aaliyah's wholesomeness with Li's diffidence (and his evident lack of English fluency) and you've got a good-natured but awkward pairing that generates absolutely no heat. For all the trouble Han and Trish's romance is supposed to cause, they never even kiss, either because the filmmakers didn't want to get anywhere near the interracial-sex taboo or because it just seemed too damn unlikely.

You get the feeling that watching an old movie on AMC and eating out of the same popcorn container would be a hot date for these two. In any event, the central plot engine stalls out immediately, so we're left with a version of "Romeo and Juliet" in which the so-called love affair is just downtime while we wait for Romeo to kick some Capulet ass.

Which he most certainly does. When Li isn't dispatching his enemies -- who, as the plot thickens, come from both the black and the Chinese camps -- with severed firehoses, plastic twist-ties and their own belts, he's using Aaliyah herself as a weapon, in the film's show-stopper, to battle a female attacker (a cameo for Hong Kong star Frangoise Yip). "I can't hit a girl," Han sheepishly explains.

Much of this film's delirious, ecstatic violence is inflicted on the fine comic actor Anthony Anderson, who should be awarded an honorary Purple Heart for his punching-bag role as Maurice, Trish's inept bodyguard.

What made Li's early Hong Kong films so memorable was that the story and settings were nearly as important as the intricately choreographed fights; for all the talent on hand here, "Romeo Must Die" is all veneer and little substance. Still, it's a canny, ingeniously crafted guilty pleasure, signaling that not just a new star but a newly invigorated genre of action cinema has risen in Hollywood.