Fighting Yasser Arafat and a rival branch of the Russian Orthodox Church, Sister Maria Stephanopoulos hopes the pope will help in one of the many religious turf wars in the holy lands. 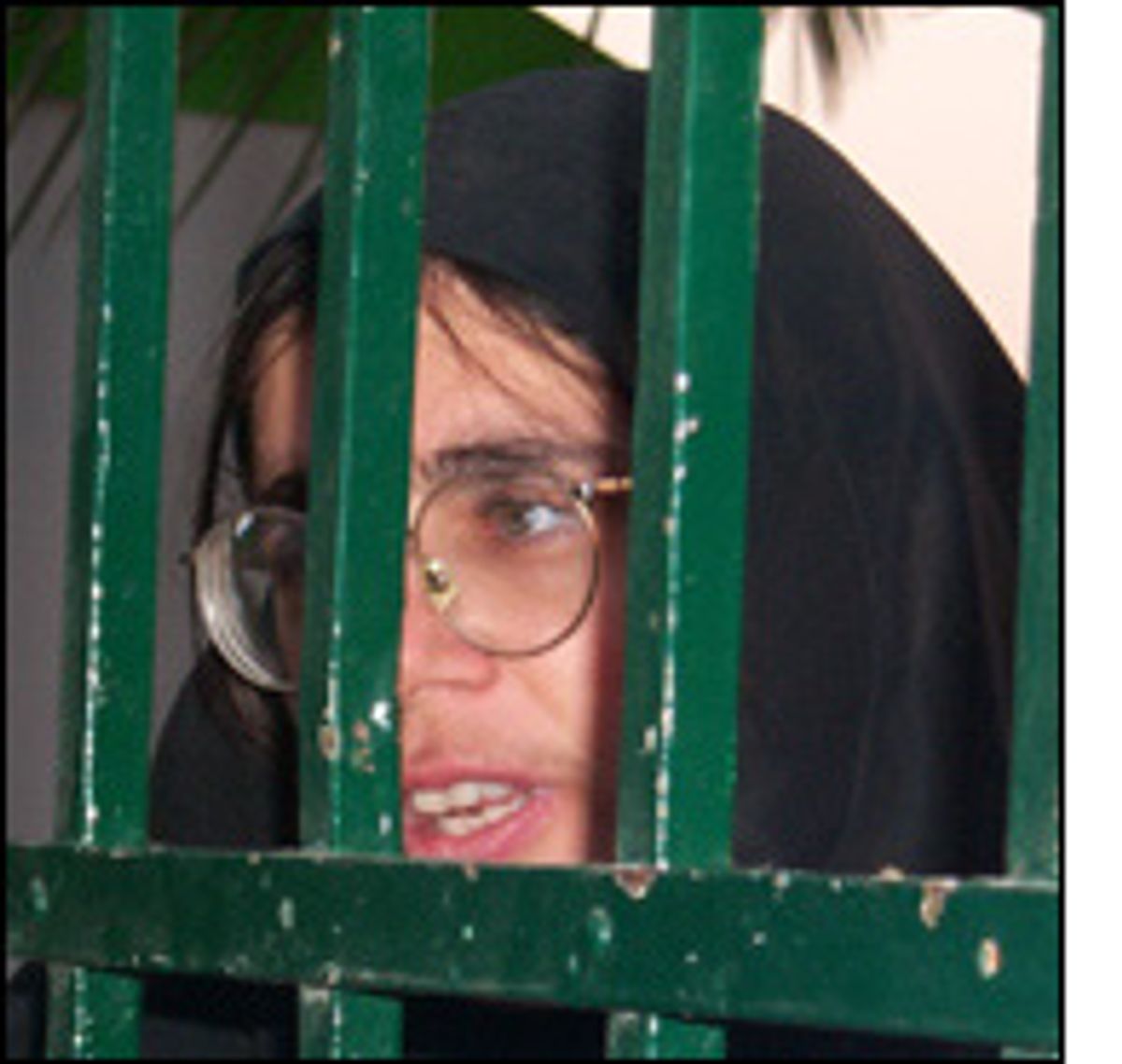 "Why can't they come in?" she protested.

One of the guards waved his arm dismissively: No visitors. Despite the Palestinian Authority's pledge to allow Sister Maria to receive guests inside the compound, she settled for talking through the bars.

This has been the situation for more than 60 days at this Russian Orthodox monastery, where Sister Maria Stephanopoulos has barricaded herself among the crumbling buildings to protest Yasser Arafat's decision to transfer the property to a rival church.

Sister Maria, whose brother is former Clinton aide George Stephanopoulos and whose father is one of the most influential priests in the North American Greek Orthodox community, has been drawing international attention to an arcane struggle between two branches of the Russian Orthodox Church.

Now, during the pope's historic state visit to the Holy Land, Sister Maria hopes John Paul II will lend his influence to pressure Arafat to resolve the conflict. In an effort to catch the pope's attention, Sister Maria is consuming only bread and water in a symbolic hunger strike coinciding with Lent, which began this week.

"I would hope this issue's going to resonate with him," she said. "He was in Poland and he really had a lot to do with the downfall of communism there, so he should certainly understand."

The standoff began in January when Sister Maria slipped past Palestinian security forces carrying out orders to take the 3-acre monastery from the U.S.-based Russian Orthodox Church Outside Russia and hand it to the Moscow Patriarchate in Russia. Both churches claim to be the official Russian Orthodox church and both say they can prove ownership of the monastery. The Moscow-based church has enjoyed a close relationship with Arafat since his guerilla fighter days, and Arafat initially agreed to place the property safely in the hands of the Moscow church.

John Paul II has no plans to meet with Sister Maria or to intervene on her behalf, according to Bishop Kamal Bathish, the Vatican's ambassador to Jerusalem.

But that hasn't slowed her efforts. Even with her rigorous religious lifestyle, Sister Maria has shown the Stephanopoulos public relations savvy. In the first weeks of the standoff, though she had no running water, she used a cell phone to communicate with reporters and U.S. consular officials in Israel.

Almost daily she hand writes eloquent, passionate descriptions of her situation, which she slides through the bars of the monastery gate to Sister Martha Malikoff, who has taken over Sister Maria's headmistress duties at the Bethany School. Sister Martha then types the letters and e-mails them around the world to hundreds of informally networked friends and church colleagues.

The dusty streets of Palestinian Jericho stand in stark contrast to the overgrown monastery grounds inside the walls. There Sister Maria sleeps in a broken-down trailer, which she calls "Noah's Ark" because it sinks into the mud during rain storms. Tall palms line the compound's main road, and citrus and date trees planted by a monk evicted at the outset of the conflict dot the grounds. Much of Sister Maria's day is spent in prayer. "A good day to me is when things are relatively calm and quiet," she wrote in one of her e-mail updates recently. "I can sit peacefully a bit among the fruit trees."

In addition to brusque treatment at the hands of the Palestinian Authority guards, Sister Maria says she is often harassed by the Moscow Patriarchate monks who occupy the other half of the compound.

Sister Maria grew up in a prominent family within the tightly knit Greek Orthodox community. Nikki Stephanopoulos, her mother, handles communications for the church's North American Archdiocese. Her father, the Rev. Robert Stephanopoulos, leads the New York congregation, the country's most prestigious diocese. Her brother, George, a former Rhodes scholar and White House aide, is now a political commentator for ABC News.

In an e-mail to Salon News, George Stephanopoulos said he plans to meet with his sister in Jericho in the next few days. "My greatest concern, as her brother, is that Sr. Maria remains safe and healthy, and I admire her determination," he wrote.

The Greek Orthodox community is well-educated, largely affluent and nimbly networked, and its religious principles call for action in the secular world as well as for prayers. Since the start of the conflict, church members have sought the influence of several members of Congress. Peter Doukas, a church member who mounted an unsuccessful campaign for Congress in 1988, contacted Sen. Charles Schumer. Nikki Stephanopoulos enlisted friend Rep. Carolyn Maloney, who represents New York's Upper East Side. Maloney quickly shot off an angry letter to Arafat, and later introduced a resolution in Congress calling on the Palestinian Authority to protect Christian holy sites and to resolve the conflict through an outside arbitrator.

Last month, a fact-finding delegation that included Nikki Stephanopoulos and representatives from the offices of Maloney, Rep. Tom Lantos and Sen. Daniel Patrick Moynihan journeyed to Jericho. They met with officials from the Palestinian Authority, the U.S. consulate and the Moscow Patriarchate, reaching an agreement that allows Sister Maria greater access to the property, specifically to the compound's chapel.

The agreement also guaranteed freedom of movement for Sister Maria and Sister Xenia Cesena, a San Francisco nun who until recently was holed up with Sister Maria. Despite the agreement, Sister Maria said the Moscow Patriarchate monks still prevent her from worshiping in the monastery's chapel. "Anytime we get close they close the door in our face," she said. "There's no such thing as equal access."

Officially, the Greek Orthodox Church is not in communion with Sister Maria's "White" Russian church, which split from the Moscow Patriarchate after the 1917 revolution. That breakaway group formed the exile Russian Orthodox Church Outside Russia after accusing the official Russian Church of submitting to communist rule, and is now the most conservative branch of Russian Orthodoxy. The White Russian church considers the Romanov family saints and follows the old Russian calendar.

As the Muslim call to prayer echoed across the darkening streets of Jericho, one of the Palestinian Authority guards locked the gate with a final metallic clang. Sister Maria's blue habit dragged across the dirt path as she retreated into the monastery grounds. "I believe in the new martyrs, what they stood for," she said, renewing her pledge to continue the protest. "The freedom of the church in the end is what it's about."

Abigail Beshkin is a freelance writer based in Brooklyn, N.Y. She has written for the New York Times and worked as a news anchor for WFUV public radio in New York.