Is it a feature-length commercial for World Championship Wrestling or a juvenile work of deviant genius -- or both? 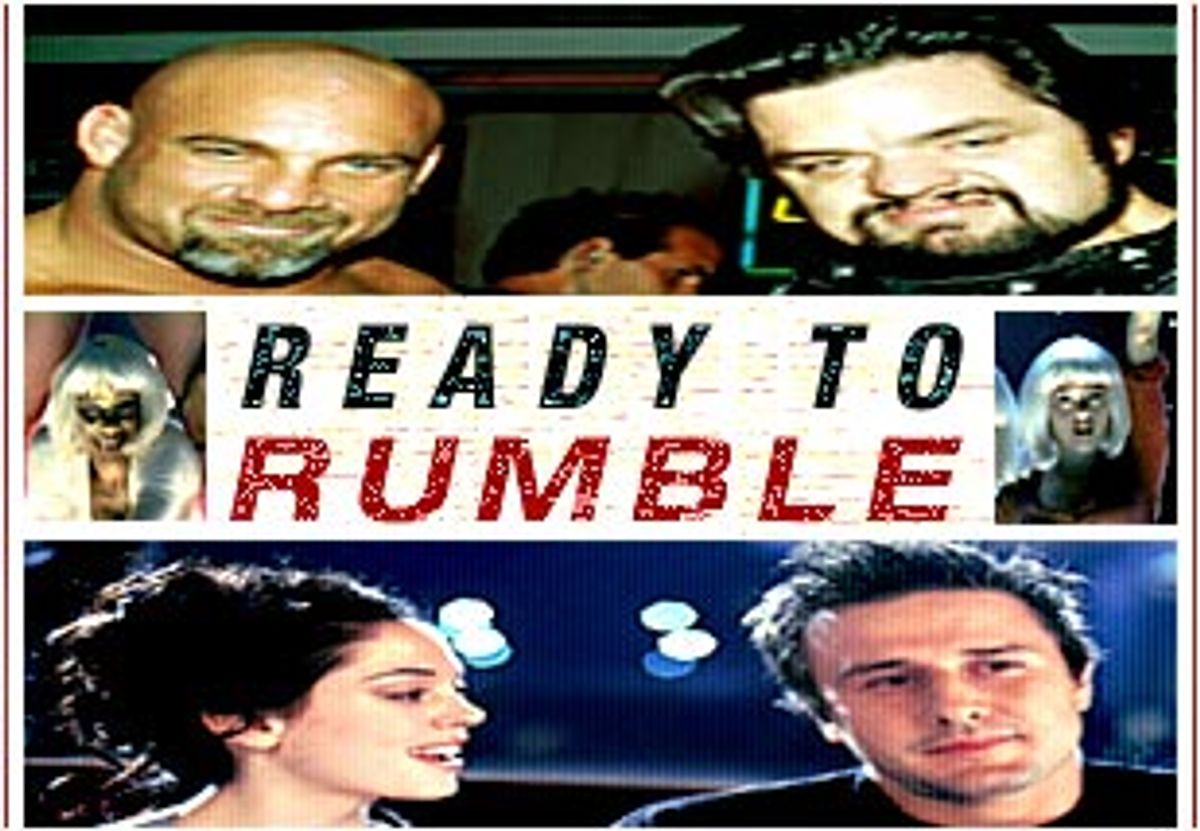 Look, there's no point pretending that "Ready to Rumble" isn't completely juvenile and mindless. It isn't merely a wrestling movie; it's a thinly veiled two-hour promotion for World Championship Wrestling, the Ted Turner-owned outfit that's a distant second in the squared-circle racket (behind Vince McMahon's World Wrestling Federation). But given that, director Brian Robbins and screenwriter Steven Brill have produced a work of deviant genius, a hilarious hog wallow in juvenile mindlessness with a gentle spirit of self-mockery and a heart of gold.

If the clueless twosome of wrestling fans played by David Arquette and Scott Caan have an obvious lineage that includes such previous duo comedies as "Dumb and Dumber" and "Bill and Ted's Excellent Adventure" (not to mention countless other pairings stretching back at least to Abbott and Costello), they do this Zen-moronic tradition proud. What really puts "Ready to Rumble" over the top into delirious delight, however, is the hysterical, completely deadpan performance of Oliver Platt as Jimmy King, a swaggering wrestling icon with a scepter, cape and pasteboard crown that would look cheesy at the Tulsa Renaissance Faire. Sure, this movie has some truly embarrassing moments (let's not talk about Martin Landau's performance as an aging wrestling wizard), but for each of those there's another that's laugh-till-you-puke funny. Obviously 12-year-olds across the country will be clamoring to see it, but "Ready to Rumble" should also have a long afterlife ahead as a late-night cult treat for cackling stoners.

Let's be real clear about this: You've got to be suffering from some major trash-culture brain damage to enjoy a movie like "Ready to Rumble," and if you're more the "Red Violin" type whose idea of lowbrow fun is catching an episode of "Law and Order" every so often, then for God's sake stay home. The phrases "ass juice" and "butt fruit" appear within the film's first few minutes, as does the unanswerable question "If you only have one nut left, is it still your left nut?" Ahmet Zappa's highly enjoyable cameo as a permanently pissed-off convenience-store clerk is highlighted by his reading of the line "I'm your bitch and you're my daddy." Enough said?

If "Ready to Rumble" never quite recovers from its amazing, hallucinatory first half-hour, it almost doesn't have to. I won't spoil the movie's best jokes for you (as usual, several of them are already in the trailer), but let's just say that if you're as big an idiot as I apparently am, you'll be cracking up so convulsively that the story can afford to coast for a while. Gordie (Arquette) and Sean (Caan) are a couple of Wyoming septic-tank men with a dream, or at least an obsession. That obsession, of course, is legendary WCW champion King; Sean has even made himself and Gordie a pair of leather bracelets emblazoned with WWKD (for "What would King do?" and if you don't get the reference you haven't spent enough time in Middle America).

Caan (who is the son of actor James Caan and has previously appeared in "Boiler Room" and Robbins' "Varsity Blues," among other films) is a likable, all-American handsome screen presence with some worthy bits of comic business, but there's a slight I'm-just-kidding tinge to his performance. As Arquette proved in his increasingly central Deputy Dewey role in the "Scream" series, he's incapable of that. There's an almost scary intensity to his comedy, the kind of thing that makes the other actors stop what they're doing and look at him askance for a second. Whether Gordie is telling a van full of nuns, "You chicks rock!" (they do, after all, join him in a rendition of Van Halen's "Running With the Devil") or furiously rejecting claims that wrestling is fake, his over-amped enthusiasm feels completely real; there's no ironic separation between actor and character.

When Gordie and Sean actually rouse themselves from the steps of the convenience store -- site of Gordie's outlandish, sugar-fueled wrestling fantasies -- it's for their trip to Cheyenne to witness King's championship defense against Diamond Dallas Page (the first of many appearances by, er, legitimate WCW wrestlers). Little do they know that slimy WCW entrepreneur Titus Sinclair (Joe Pantoliano) has picked that night for King's ritual dethroning, a grisly "four-post massacre" in which even his previously loyal retainers will betray him. King struts into the ring, proclaiming, "Good evening, Cheyenne! We're going to rule some ass tonight!" and intoning a verse from Run DMC's "King of Rock," but, tragically, he ends up stretchered out, his career apparently over.

Platt has something of Arquette's samurai commitment to shtick; even if his Elvis-manqui King is a clown playing a caricature (or maybe the other way around), Platt doesn't condescend to him just because he's ludicrous. "Ready to Rumble" doesn't ask us to believe that wrestling is a legitimate sport, nor to believe that anybody thinks it is. (Even Gordie, in his heart, knows the truth.) When Gordie and Sean finally catch up to the defeated King, who's hiding out in women's clothes in an Atlanta trailer park, he extorts $30 and a six-pack out of them and patiently explains the business: "We're just circus clowns, with dancing and a little soap opera."

Gordie and Sean's response is not just the central question behind "Ready to Rumble" but behind the remarkable rebirth of wrestling in general: "How can you be fake if we believe in you?" It should be obvious by now that wrestling's very fakeness is the source of much of its popularity. If sports in general are a form of symbolic drama, then wrestling is a Grand Guignol puppet theater that appeals to our deep-rooted fatalism and desire to believe in conspiracies. Quite seriously, I think it expresses some of Americans' finest qualities: We may be morons who revel in high histrionics and low slapstick, but we can always appreciate a joke at our own expense.

Needless to say, Gordie and Sean persuade their fallen hero to attempt to live up to their vision of him, and they sneak him back into Sinclair's empire and turn the WCW's scripted "works," to use industry parlance, into "shoots" (i.e., spontaneous events). As wrestling fans will note, WCW has no visible leader like Sinclair, and in fact Pantoliano's weaselly character seems like a jibe at the megalomaniacal McMahon, who has made himself an increasingly important figure in the WWF's running plot lines. If "Ready to Rumble" becomes far more predictable as it enlists popular wrestlers like Page, Goldberg, Sting and Sid Vicious in a number of arena-scale battles along King's path back to his throne, it never loses its outsize, trashy sense of humor.

Luscious indie goddess Rose McGowan has an unfortunately brief role as the sirenlike Sasha, "the Nitro-est of the Nitro Girls," who has a Keane-eyed portrait of herself in her bedroom and toys mercilessly with Gordie's affections. But this isn't a movie about growth and change and adult romance (as if that needs saying); it's a movie for the towheaded, malicious inner child who cherishes the precious American freedom to be a dumbass. Or, as Gordie puts it in one of the great motion-picture lines of all time: "My dad sucks, man."