"Where the Heart Is"

With an Oprah-book plot and Hallmark sentimentality, the trailer-park melodrama never lets you forget that Natalie Portman and Ashley Judd are hot babes with perfect complexions. 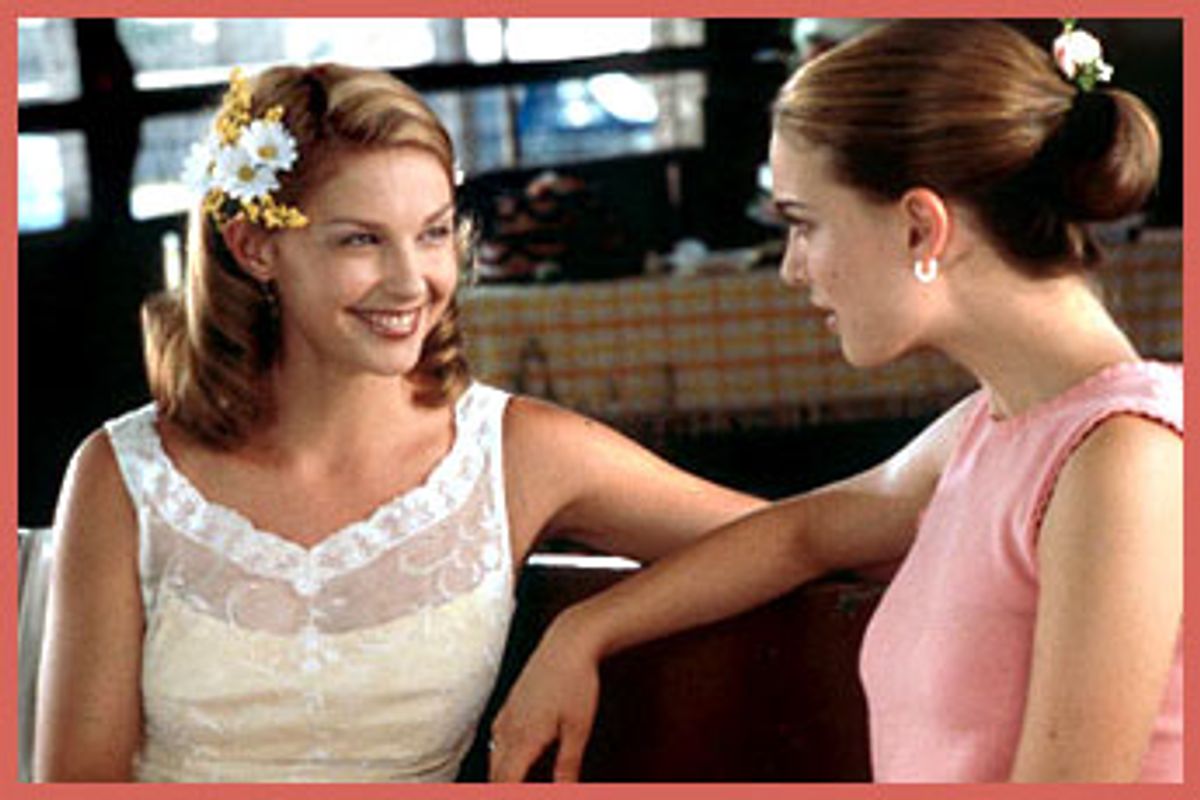 Video renters of the future will forever be perplexed by "Where the Heart Is," sitting
there on the shelf right next to John Boorman's 1990 film of exactly the same name.
Well, here's my advice, which you can print out, fold up and stick in your wallet against
that day: Rent the other one. (OK, it sort of blows too, but with the young Uma
Thurman and Crispin Glover in the cast, it's miles ahead.)

This "Where the Heart Is," adapted from an Oprah-endorsed bestseller by Billie Letts,
starts off with two adorable female stars and a tone of folksy, trailer-park melodrama
that puts it squarely in Fried Green Endearment country. But as its story becomes more
and more ludicrous, its vision of American life becomes more and more canned and
condescending -- a prefabricated blur of ambulances, tornadoes, tearful homilies and
Life Lessons. Maybe the novel's good intentions felt more genuine, but what director
Matt Williams and the longtime comedy screenwriting duo of Lowell Ganz and Babaloo
Mandel ("EdTV," "A League of Their Own" and "Parenthood," just to name a few) give
us here is strictly Middle America as seen on CNN.

When a boom mike bobbing in and out of the frame interrupted a nervous, tender
scene between teenage single mom Novalee Nation (Natalie Portman) and her geeky
librarian lover, Forney (James Frain), the preview audience around me began to howl in
outrage. It was the sound of insult added to injury. After all, we had accepted that one
Oklahoma town might have two working-class unmarried mothers who were beautiful
gamines with perfect complexions. We had accepted the eccentric names: Lexie Coop,
Moses Whitecotton, Thelma "Sister" Husband, Mr. Sprock. We had accepted the
Christian kidnappers and the alcoholic sister in the attic and the character who
becomes a country singing sensation and gets his legs cut off by a freight train. And
then came this, clear evidence that even after all our sacrifice, the filmmakers still
didn't give a damn about us.

I guess you can't call a movie "Where the Heart Is" unless you're preaching a sermon
about Our Troubled Society. In Boorman's film, a rich, quirky father (Dabney
Coleman) makes his kids go homeless to teach them a lesson, while in the 2000
version the literally barefoot-and-pregnant Novalee winds up living in a Wal-Mart for
weeks after her boyfriend leaves her in the parking lot. There's something crudely
brilliant about this premise, and Portman is at her best in these early scenes. With
nothing but a shapeless tan sundress, a pair of flip-flops and $5.55 to her name
(she's phobic about fives), Novalee retains the American faith in self-improvement.
Alone at night in the spooky, hangarlike expanse of Wal-Mart, she reads Mothering
magazine, works out with weights and keeps a scrupulous ledger of her appropriated
food and supplies, marked: "I Owe Wal-Mart."

Frankly, the story of the girl who gives birth in Wal-Mart would have been plenty for a
low-key, slightly off-kilter American fable in the vein of "The Straight Story."
But just when it seems that Williams and his star have settled into a rhythm, "Where
the Heart Is" makes the first of its daffy and ultimately fatal key changes. Novalee
goes into labor on a dark and stormy night (in Aisle 5!), but Forney, the town's
would-be intellectual, has apparently been stalking her and dives through the store's
plate-glass window to deliver her baby. Novalee blacks out, perhaps to spare us the
actual birth scene, and the next thing we know, she's a media celebrity as mother of the
"Wal-Mart baby," with twinkly, wisecracking nurse Lexie (Ashley Judd) beside her hospital bed.

Now, I'm as charmed by Judd's unquenchable perk and spunk as the next fellow, but
in terms of cuteness Lexie Coop is just a bridge too far. She has a propensity for
getting knocked up by the wrong guy, and has wound up with a houseful of angelic
children all named after snack foods (after Praline and Brownie, they became too
horrifying to remember). Even when Lexie really hooks up with the wrong guy
and gets severely beaten and brutalized, all it takes is some tearful late-night bonding
with Novalee on the front porch to get her back on the path of living and loving. "We've
all got meanness in us, but we've all got good in us too," Novalee pronounces. "And
the good is the only thing that's worth a damn."

Maybe I should be grateful that this movie's Hallmark portrayal of single motherhood
and nonmarital sex is likely to offend moralists of the hard right, but I'm not sure
that's a good enough reason for such crappy writing and overall shoddy construction.
This is Williams' first film as a director, and his experience producing sitcoms like
"Roseanne" and "Home Improvement" shows. His individual scenes often seem fine,
in a bright, punchy, cloudlessly superficial way, but he has no sense of how to make a
feature-length narrative stick together. On several occasions, the story makes ungainly
leaps across long stretches of time, leaving the characters -- who look completely
unchanged -- to tell us that it has been two years since their last conversation or that
Novalee's infant daughter is suddenly celebrating her fifth birthday.

Characters both kindly and evil pop in and out of the increasingly erratic story like that
troublesome boom mike. "Sister" Husband (Stockard Channing), an earth mother with
a Dodge pickup-cum-covered wagon, dispenses biblical verses and homespun humor,
at least until the tornado hits. Moses Whitecotton (Keith David), the African-American
photographer at Wal-Mart, occasionally shows up like a no-rent Obi-Wan to encourage
Novalee's professional dreams. And for some reason, the movie occasionally skips out
on Novalee to catch up with her no-account mullet-head ex, Willy Jack (Dylan Bruno),
whose brief country-music career is stage-managed by a conniving Nashville agent
(Joan Cusack, grievously miscast). Then there's Frain, providing his best Jeff Goldblum
impression as Forney, the stammering geek who carries an obvious torch for Novalee.

By the time Novalee and Forney are finally enveloped in a soft-rock love theme, Willy
Jack has been forced to beg for forgiveness and Lexie has pixied her way to
snack-food baby No. 6, all my initial goodwill toward "Where the Heart Is" had been
exhausted. It's a soft-focus cartoon in which Wal-Mart is the beneficent community
center for small-town America (I hope the company paid through the nose for its
starring role), clasping unmarried moms to its corporate breast, at least if they're
gorgeous white chicks. Portman and Judd aren't responsible for the mendacious and
finally repulsive sentimentality of "Where the Heart Is," but by the end their
wholesome glow seemed contaminated by it, and that's a shame.