We who are about to be bored salute you! Russell Crowe stars in Ridley Scott's Roman bloodfest. 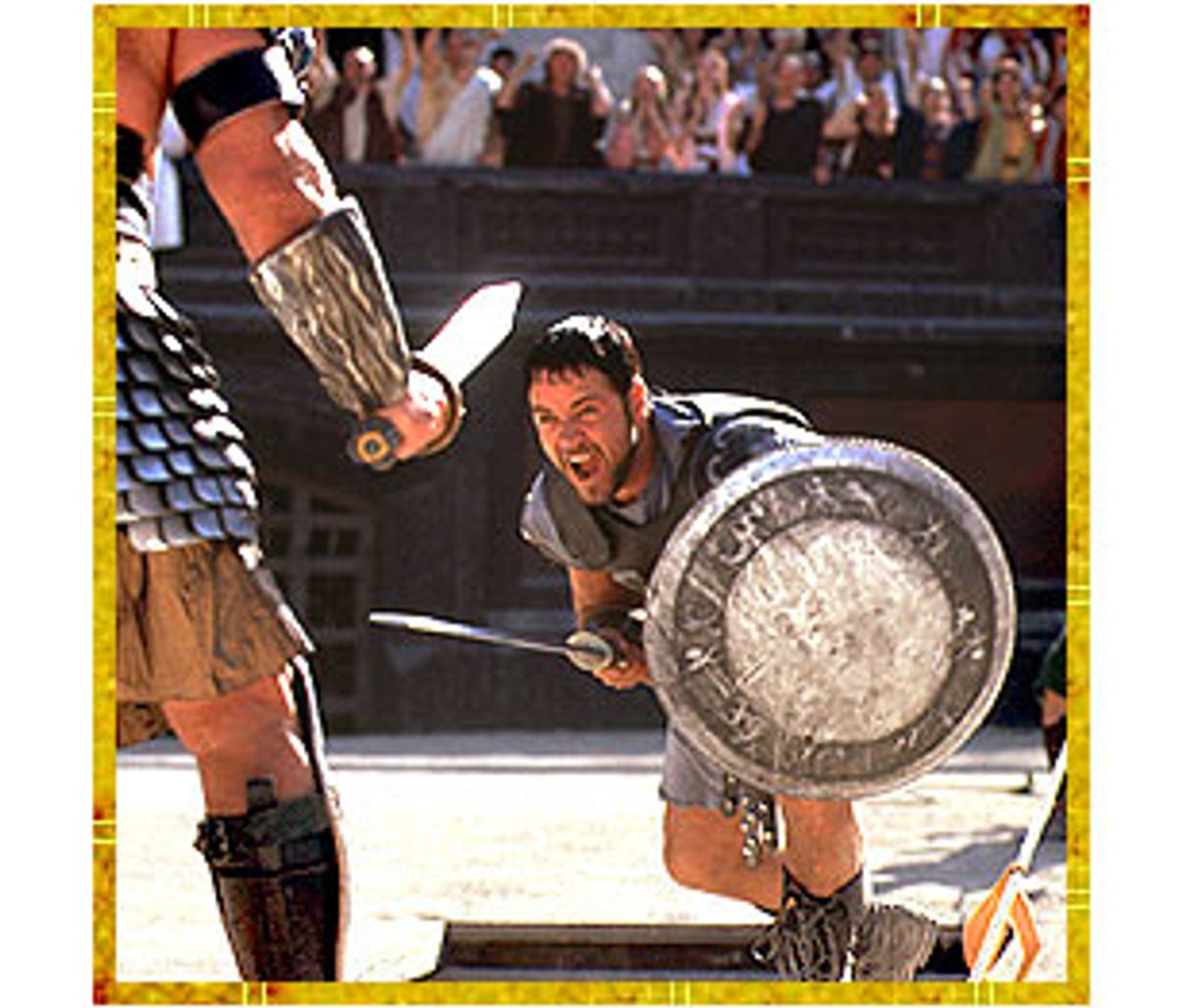 For all practical purposes, Ridley Scott's reputation as one of the most important mainstream directors of his era rests on just two movies, but what movies they are! "Alien" and "Blade Runner" didn't just imagine the future, they helped create it. Grumpy critics like me often claim that style has become substance in Hollywood filmmaking, and in Scott's case it's all too true. For better or worse, design is the point of his films; it is his narrative mode, his central character and his subject matter. As my significant other suggested the other night, now that Scott has lived to see the designers of midtown Manhattan self-consciously emulate "Blade Runner," perhaps the ancient world is all he has left to exploit.

With the lone exception of "Thelma and Louise," which is atypical of his work in many ways, Scott's post-1982 films have failed to capture filmgoers' imaginations or to strike the sparks of cold genius that seemed so evident in his early, visionary masterpieces. Yeah, I know that "Legend" and "Someone to Watch Over Me" have their defenders (myself included), but that's not the point. As for "1492: Conquest of Paradise," "White Squall" and "G.I. Jane," well, please. We're talking expensive candy -- really expensive candy -- with no chewy center.

So the answer to your question about "Gladiator" is that the lights are blazing and the music's playing nice and loud, but as far as I can tell nobody's home. Its re-creation of the Roman world, from the gladiatorial games of the Colosseum to a hill town in North Africa to the barbarian front in Germania, offers in equal parts computer graphics and old-fashioned moviemaking spectacle -- and is suitably impressive throughout. It even has a few sneaky moments of emotional power, as when the general turned slave turned gladiator Maximus (Russell Crowe) dreams of meeting his family in the afterlife, or in his stoical friendship with an African gladiator named Juba (Djimon Hounsou).

But for all its grandeur, "Gladiator" is a canned experience, a film that flails around awkwardly trying to find a reason to exist, or at least a compelling story to tell. (Those who claim to see it as an Allegory for Our Time are desperately reaching, if you ask me.) Creating entertainment on an epic scale is not the same thing as creating an epic, and "Gladiator" suggests an elaborate, fancy-dress version of the video game Mortal Kombat. Sure, it has plot elements -- a murdered emperor, his wicked son and sultry daughter, the hero's longing for his dead wife and child -- but they mostly seem like exotic window dressing arranged around repetitious scenes of violence.

In the words of film historian David Thomson, Scott is a decorator, a borrower and a synthesist who absorbs and reprocesses many different elements and influences. His borrowings here result in an undigested mash more redolent of his own youth in postwar England than of the second century: Chop up the plots from various Hollywood sword-and-toga epics of the 1950s and mix in the conspiratorial atmosphere of "I, Claudius" and some warmed-over Shakespearean acting. Add the beefy, brooding Crowe for a hint of contemporary angst and stir in some World Wrestling Federation-level mayhem. Serve tepid.

Crowe's Jeffrey Wigand in "The Insider" was a man who could hardly begin to understand his own complexities; part of the appeal of that movie was watching the amazement with which he viewed his own courage and principle. Maximus is meant to be a man of simple tastes whose pain is all on the surface, and it's a credit to Crowe that the dullest and simplest character of his career still seems to have clouds and shadows swimming behind his eyes.

The film begins with Maximus leading his legions to a glorious victory over the German barbarians in a stunningly successful mud 'n' blood 'n' arrows battle sequence. We learn that he was once in love with Lucilla (Connie Nielsen), witchy daughter of Emperor Marcus Aurelius (Richard Harris). But like the barbarian battle itself, the Lucilla romance doesn't really go anywhere or mean anything; I think it's there only as a plot device, so Lucilla will have a reason to help the enslaved Maximus later in the film.

Out there on the grimly picturesque Germanic front, with the steaming hordes facing his troops and the leonine Harris looking on in King Lear drag, Crowe seems to be playing a loyal general in one of Shakespeare's lesser history plays. This impression grows stronger with the arrival of the unfortunately named Commodus (Joaquin Phoenix), the emperor's preening, languid-eyed son. He shows up too late for the battle but just in time to murder his father and stop him from passing control of the empire to Maximus, who in any case only wants to go home to his Spanish farmstead. Phoenix is something of a scenery muncher at the best of times, and perhaps he and Scott agreed that playing a decadent Roman usurper is no occasion for actorly restraint. Commodus spends much of the film bellowing or hissing like an asp and, his queeny demeanor aside, trying to slip between the sheets with his sister, Lucilla.

Maybe the plummy BBC accents adopted by Phoenix and the Danish-born Nielsen are intended to make them seem plausibly related to the Anglo-Irish Harris, but the effect is somewhere between Monty Python and an ambitious college production of "Antony and Cleopatra." I don't know what Scott was thinking when he cast Derek Jacobi in a minor role (as a senator devoted to restoring the lost Roman republic). All it accomplishes is to remind us that "I, Claudius" (for you youngsters, the British TV miniseries in which Jacobi starred in the '70s) successfully achieved the kind of dense melodrama suggested by "Gladiator," but at a tiny fraction of the movie's budget and with vastly superior writing.

In the great tradition of improbable movie villainy, Commodus doesn't have Maximus simply and efficiently killed, but insists that several soldiers transport him miles away, providing him ample opportunity to escape. Struggling home to Spain to find his farm burned and his wife and child grotesquely slaughtered, Maximus somehow -- I'm frankly not sure how, and neither are the filmmakers -- winds up in the African gladiator training camp belonging to Proximo (Oliver Reed). A veteran of many cheesy costume dramas, Reed seems to relish this slimy Mediterranean tycoon role. "I did not spend good money on you for your company," Proximo crows to his musclebound trainees. "I spent it to profit from your deaths!" For a while, at least, "Gladiator" sheds its dour pretensions and slides toward the enjoyable-trash vein exemplified by Victor Mature in "Demetrius and the Gladiators" or Steve Reeves in "Hercules Unchained."

From here on out, we're talking Schwarzeneggerian dudes in fearsome masks and little skirts, African charioteer babes in body-hugging armor, ravenous tigers and cries of "We who are about to die salute you!" Buoyed by his friendship with Juba, Maximus defeats all comers in Africa and makes it to the big show in the Roman Colosseum, where, of course, he gets many opportunities to humiliate the sinister but incompetent Commodus. (Phoenix never actually utters the phrase "Thufferin' thuccotash!" but his performance implies it.) You could argue that it's a waste for an actor of Crowe's caliber to play the kind of role customarily filled by retired bodybuilders, but at least the grandiose fight sequences keep your mind off the torpid, recycled plot.

It may be that Scott and his screenwriters (David Franzoni, John Logan and William Nicholson) think that the decadent Roman Empire depicted in "Gladiator" has some contemporary relevance. But such comparisons are inherently dimwitted; there has never been an age in human history that resisted vulgar spectacle, and very few that didn't see themselves as in some way a decline from earlier eras. Sure, the public will settle for bread and circuses most of the time, but, folks, it was ever thus. The real story of compromise and decline here belongs to Ridley Scott, who can find no better use for his ample talents than this grandiose but vacant entertainment.