Why does the left ignore Waco?

There's a better case for making a martyr of David Koresh than Mumia Abu-Jamal. So why do liberals continue to overlook him? 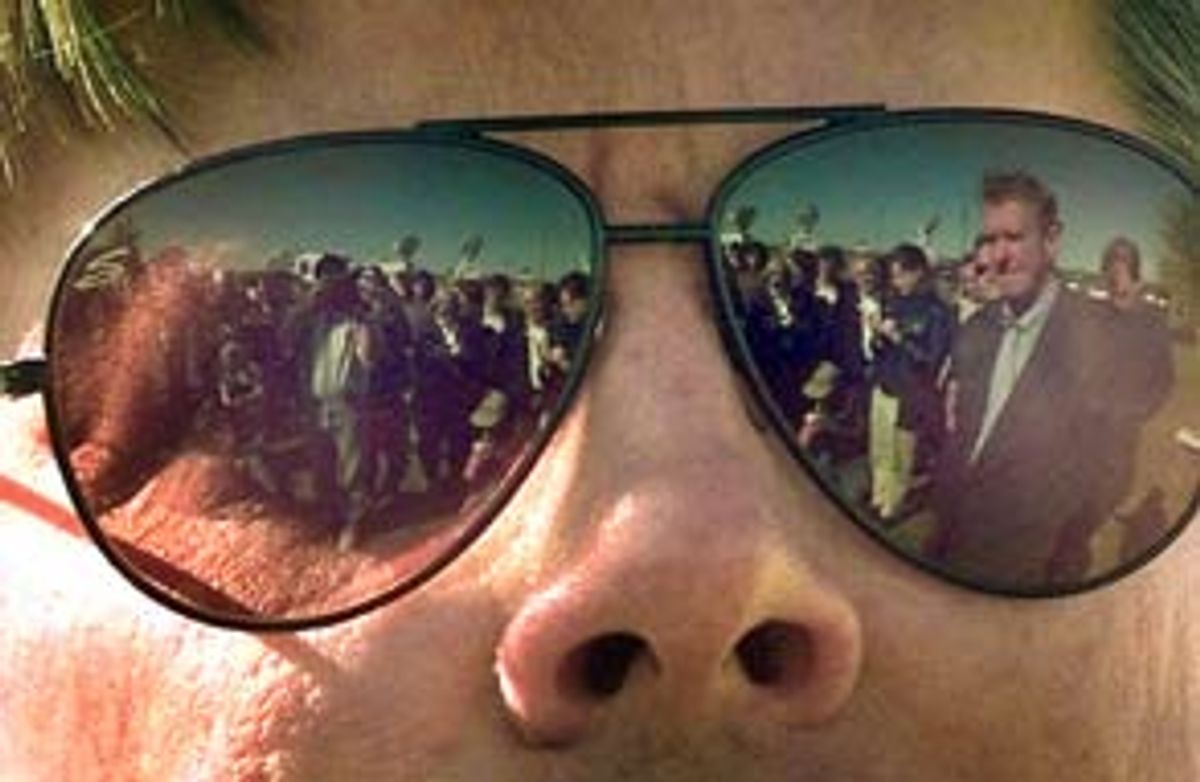 What does Mumia Abu-Jamal have that David Koresh doesn't? From Ed Asner to Alice Walker, liberals have flocked to defend Mumia -- convicted in 1982 of killing Philadelphia police officer Daniel Faulkner -- criticizing the way police and prosecutors handled his case and demanding a new trial. Luminaries of the left marched, chanted and purchased full-page ads in the New York Times to appeal to state and federal authorities to provide for Mumia, who has been on Pennsylvania's death row for 18 years.

Meanwhile, conservatives have taken up for David Koresh and the 80 Branch Davidians who died in Waco in 1993. Why haven't liberals shown the same concern for them? While there are some questions about the conduct of police and prosecutors in the Mumia case, there are many more lingering questions about the police actions taken against Koresh and his followers. For instance: Why did the Department of Justice use tanks against civilians? Why did the Bureau of Alcohol, Tobacco and Firearms continue with its raid against Koresh when it knew the element of surprise had been lost? Why didn't the ATF simply arrest Koresh when he was shopping in Waco or away from the Mount Carmel compound in the weeks before the February 28, 1993, raid?

There are dozens of other questions, all of which are of particular importance now that the Branch Davidians' civil lawsuit against the federal government is going forward. Jury selection in the trial begins Monday. The lawsuit, being tried in Waco before U.S. District Court Judge Walter Smith, Jr., accuses the government of negligence in its actions during the standoff. So why haven't more members of the left rallied to the Davidians' side?

Indeed, of all the controversial police actions of recent years, the ATF's and FBI's assaults on the Mount Carmel compound are the ones that should have most aroused the left's passion. Never before or since has so much military firepower been brought to bear on a group of American civilians. That fact alone should be reason enough to convince the left to spring into action. After all, the left has long argued for demilitarization. Yet, when the military used tanks, helicopters and psychological weapons (including high-volume speakers blaring music to prevent Koresh and his followers from sleeping) against civilians in Waco, they remained, for the most part, silent.

A handful of liberals, including former Attorney General Ramsey Clark, who represents some of the Davidians and their survivors in the lawsuit, have weighed in on the matter. Another noted leftist, Howard Zinn, came out in defense of Koresh in an article he wrote for Z Magazine during the height of the Clinton impeachment debate. Zinn wrote that there were better reasons to impeach Clinton than having fellatio performed on him by Monica Lewinsky -- the foremost being the federal attack on Waco. The circumstances of the siege, he wrote, "did not warrant losing patience with negotiations and choosing a military solution."

Other theories that may explain why the left has ignored Waco revolve around the same broad issues that tend to galvanize Americans in general: guns, race, religion, class and the Clinton presidency.

Mumia Abu-Jamal has his own theory about the left's silence: Bill Clinton. In a recent exchange of letters from his death row cell in Waynesburg, Penn., Mumia opined that the main reason liberals haven't admonished the ATF and FBI is that they were "so hungry for a win in Washington after years of Reagan/Bush." Liberals "were certainly reluctant to pin Reno/Clinton to the wall after Waco," Mumia wrote, "and then proceeded to ignore and forget the carnage at Mount Carmel."

Former Texas State Sen. Jerry Patterson says the issue is guns. Patterson, a former Marine aviator, laughingly refers to himself as a "gun nut" and the "go-to guy for the black helicopter crowd." He authored the state's concealed-handgun law. He also used his connections with other Texas state officials to help filmmaker Michael McNulty, who produced "Waco: The Rules of Engagement," gain access to the state-controlled evidence rooms in Austin, Texas.

McNulty's investigation showed conclusively that the FBI fired numerous pyrotechnic devices at the Branch Davidian compound in the hours before the final fire that consumed the building on April 19, 1993. (The discovery served to discredit the FBI, which had long denied that any such pyrotechnic devices had been used.)

Patterson says liberals don't care about Waco because Koresh and his followers were gun enthusiasts. "The left has never believed in the Second Amendment," says Patterson.

Patterson, a conservative Republican, says the left's efforts to decrease the number of handguns in circulation, and its support of the Brady bill and harsher gun control measures, prevents it from supporting Koresh, whom federal authorities accused of possessing numerous unlicensed automatic assault rifles. Never mind that Koresh's weapons would have been legal under the laws in existence at the time of the siege if he had simply bought a $200 permit for each automatic rifle.

Nor has the left noted that the Branch Davidians could have argued in court that they were simply defending themselves during the original shootout with the ATF. Though it's rarely mentioned, Texas law would have permitted the Branch Davidians to fire back upon police officers if they believed the police were using excessive force.

When I mentioned to an apolitical friend of mine that I was writing about why the left has ignored Waco, he immediately offered his own theory: "That's because the Davidians were Christians." It's a harsh charge to make, but there is a kernel of truth in it. The left has never been overly supportive of conservative Christians, who have typically allied themselves with the right. In fact, the issues the left champions -- like gun control, abortion rights and abolition of the death penalty -- put them squarely in opposition to many conservative Christian groups. After Koresh was portrayed by the media as a Christian zealot, the prospect of liberals rushing to his aid was immediately diminished.

The Davidians were "presumed to be white Bible beaters and everybody on the left hates them, right?" asks Dick Reavis, the author of "The Ashes of Waco," perhaps the best single book yet written about the events of early 1993 and the aftermath. Reavis, a longtime leftist, has frequently remarked that his criticism of the federal government has not been accepted by the people that he believed were his allies. Ironically, after his book was published, he found himself speaking to pro-militia groups, pro-gun rights activists and other conservatives.

The political divisions over Waco are "not left to right," says David Hardy, a Tucson, Ariz.-based lawyer who has written extensively about the incident at the Davidian compound. "It's the rednecks against the yuppies," he said. Hardy also points out that Koresh was not born into money, he never developed intellectual passion for anything but the Bible and he dropped out of high school in the 11th grade. He was mostly interested in girls, rock and roll, the Bible and Camaros.

Hardy's position is echoed by Reavis. "Liberalism today is a bunch of Starbucks Coffee type of people," says Reavis. "Guns and religion are blue-collar issues. My peers on the left aren't interested, but the average truck driver thinks the government murdered those people."

The issue of class, combined with the Davidians' location in rural Texas, also figured into the mix. "Whatever Koresh's politics, he was a redneck, and therefore, to the liberals, he's not interesting," said Hardy. Mumia by comparison, says Hardy, "doesn't menace any of their values."

Mumia's theory -- that liberals didn't want to take on a Democratic president they had waited years to elect -- is shared by figures across the political spectrum. Indeed, it is even bolstered by an unlikely source: Byron Sage, the now-retired FBI agent who was a lead negotiator at Mount Carmel during the siege. Sage spent hundreds of hours talking to Koresh and later testified before Congress about the deadly confrontation. Shortly after the compound burned to the ground, killing all but nine of the people inside, he said conservatives immediately used the event as a hammer. The death and destruction at Waco has "been politicized by Republicans to beat the hell out of the Clinton administration and Janet Reno," said Sage, who volunteered that he was a registered Republican throughout his entire career with the FBI. "It inflames the hell out of me," he said.

With conservatives taking the offensive, opines Sage, liberals were left with nothing to do but defend Clinton. To side with the right on Waco, even if it was morally and intellectually defensible, was not an option.

As chief trial counsel and director of the Southern Legal Resource Center, Kirk Lyons has credentials more conservative than Sage -- and like him, Lyons credits the Clinton factor for the left's silence. Based in Black Mountain, N.C., Lyons has defended a number of white supremacists and has fought efforts to remove the Confederate flag from atop the Statehouse in South Carolina.

Lyons, who represents the families of several Davidians in the civil trial, including several black victims, is not one to shy away from hyperbole. And during an interview a few days ago, he quickly launched into an attack on Clinton.

The president, says Lyons, is "a totalitarianist. He and Hillary want a worker's paradise and you need a goon state to do that. The FBI and the ATF are their goons." The reason liberals won't say anything about Waco, says Lyons, is that "it's their boy in the White House. To criticize him is to criticize the left."

The great irony about Waco is this: If he is ever executed, Mumia will become a martyr figure for the left. Meanwhile, Koresh will likely continue to be ignored, even though he and about 80 others died due to the consequences of actions taken by federal police. It's those police actions, not political persuasion, that are the common denominator among the most outspoken critics of the government on Waco.

"There's been no accountability," says Lyons. "It appears they can murder people and then just leave. I don't think they should get away with it." www.