In a medieval French village, my husband and I learned that to produce truly fine foie gras, one must embrace the goose -- and massage and fondle it too. 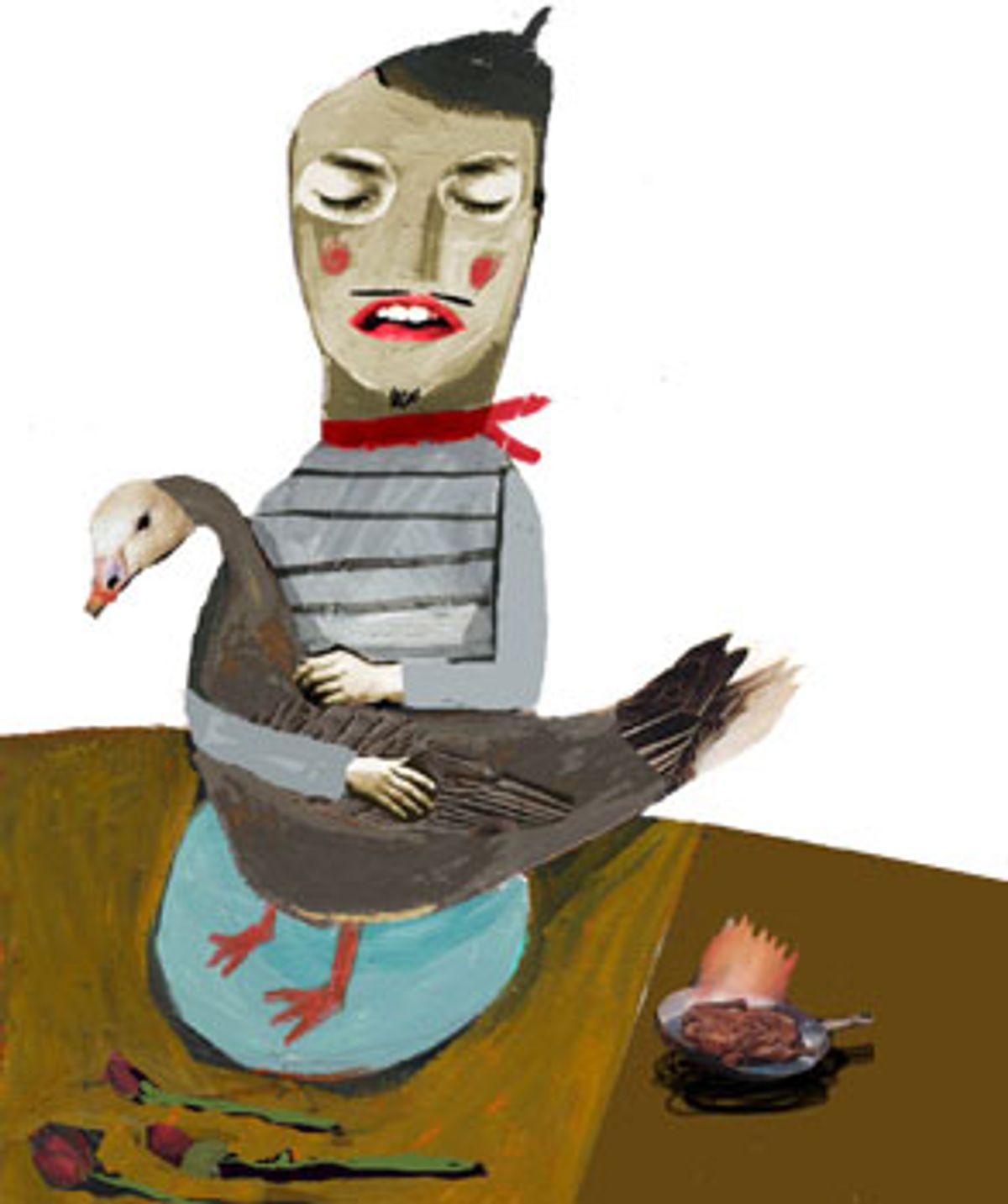 "Let's leave now, while we still can," my husband muttered.

Too late. The proprietress of the Goose Museum bustled over and announced that the "dimonstration de gavage" was about to begin. A pleasant-looking, red-cheeked woman, she glanced anxiously at the stroller in front of me and said that, during the demonstration, silence would be of the utmost importance. "The geese," she intoned, "must not be alarmed."

I lifted the blanket to show her that the baby was fast asleep.

"Come," she commanded, and the museum's few visitors, including John and me and baby too, straggled meekly after her.

Much of our time in the Quercy region of southwestern France had been spent speculating furiously about what these demonstrations actually entailed. We had learned about them from a pink flier, pressed into my hand by a man at the local tourist office.

"It lists all the local foie gras producers," I told John. "Some of them even do demonstrations."

"Demonstrations of what?" he asked warily.

"Well, 'ilevage' means how the geese are raised," I began confidently, "but I'm not sure about 'gavage' ..."

"Think about it," he said. "How could you not remember? That's what they did to Nate."

I had a vivid flashback to the hospital in San Francisco and a cheerful nurse telling me it was time to "gavage" my newborn son. He was premature and could not yet suck. When it was time for a feeding, milk was delivered in a gagging rush through a narrow tube inserted down his throat.

"You mean you actually watch the geese being force-fed?" I said slowly. "Then 'dicoupe' must mean ..."

"No!" said John. "I'm not watching a goose decapitation. What next?"

"Actually," I said, laughing a little hysterically, "after that comes 'la digustation'-- the tasting."

So during those long June days last summer, we followed the slow curve of the Lot River on our way to visit cheese producers and winemakers but, fascinated and repelled, we avoided the goose and duck farms. One day, near the end of our fortnight abroad, we stopped at Collonges La Rouge, dipping briefly into its ancient world of iron, wood and glowing red stone. It was the third medieval village we had visited that day, the end of our vacation loomed and, on our walk back to the parking lot, it was clear that time and possibility were running out.

Then I saw the wooden sign: The words "Musie des Oies" were printed above a picture of a fat, smiling white goose and an arrow that pointed down the hill.

"Museum of Geese?" I asked John.

The museum turned out to be a ramshackle farm building on the edge of the village. At the gate, a notice board announced that a "dimonstration de gavage" would occur at 2:30 p.m.

"It's fate," I said. "And it's just a force-feeding, not a decapitation." John stared at me in disbelief. "Also," I added, "the baby is asleep."

Inside the museum, far from the merry jangle of the cash register covered with grinning plastic geese, were two stark wooden shelves. Each shelf held a small selection of glass jars lined up symmetrically, with expanses of bare wood stretching between them. Inside each jar was a large, smooth gray blob almost concealed by viscous swirls of bright yellow glop.

The other museumgoers contemplated these jars in silence, moving slowly along and gazing at each one. I stared uncomprehendingly. "What is it?" I whispered to John. He shrugged and the woman behind him told me: "Foie gras entier."

No mere pbti, foie gras entier is an entire quivering lobe of goose or duck liver. Apparently, when barely cooked and vacuum-packed, the organ can remain in a glass jar for up to four years, slowly absorbing the yellow fat that surrounds it and becoming more rich, creamy and desirable by the day. I noticed that each jar was discreetly labeled with a weight and a price. I remembered that I detested liver.

It was at this point that Madame of the red cheeks took charge of us. Abandoning all thoughts of escape, we followed her over to a large wooden table.

When we got closer I realized that the "table" was actually a glass-covered opening in the floor. We gazed down into a barn containing a small wooden pen and several geese. Madame asked us once more to be very quiet and not to tap on the glass, as this would upset the geese. I hoped I would be able to keep up with her rapid French.

Presently, a tall thin man entered the pen and sat down on a low wooden bench. In my somewhat overwrought state, I was surprised that he wasn't wearing a sinister black mask. A funnel atop a long metal tube was suspended from a metal contraption near the bench. The man casually reached out and swung it around until the open end of the tube hung above his knees. The large gray geese crowded around him. He was whistling softly.

She started to make a complicated point about the anatomy of a goose's throat, which was difficult for me to follow. As she spoke, her husband pulled one of the geese gently toward him, clamped it firmly between his legs and began to caress its head and the area below its beak. He murmured to it and fondled it in a way the goose seemed to find irresistible, for it laid its head down on his thigh.

After a while the man reached up slowly for the metal tube and in a single deft movement inserted it down the bird's throat. There was a rush and a clatter as the grain in the funnel tumbled down the tube and straight into the goose's gullet. At this point, the gaveur began to massage the bird's belly with deep circular strokes. After a few seconds he took the tube from its mouth. He petted its head gently again and then released it, opening his legs to receive the next goose, which was waiting impatiently for his embrace.

I hadn't expected anything quite so ... intimate. I glanced over at John. "It's the Goose Whisperer!" I mouthed to him.

Mme. Goose Whisperer explained that geese are high-strung, sensitive birds, prone to stress, and that they will flourish only under calm and loving conditions. On some farms, she said, sniffing, anyone -- from grandma to uncle to child -- may act as the gaveur on any given day. "No routine, no continuity, no peaceful serenity," she scolded. On such farms, she suggested darkly, all the foie gras is likely to be produced by ducks. "Les canards," it seems, are fowl of a ruder temperament.

Just as I was beginning to envy the coddled geese below me, Madame reminded us all that a stressed goose will not fatten its liver. The sinister purpose of a skilled gaveur is, after all, to encourage a goose to develop as large a liver as possible.

Ducks will produce foie gras without all this loving attention, but duck liver, while undoubtedly excellent, never achieves the silky nobility, the subtle unctuousness, of a truly fine goose liver. Duck liver, she said, wrinkling her nose ever so slightly, has a flavor "plus prononci, plus rustique." Down below, her husband murmured gently to a goose nestled between his thighs.

"They're so fond of the geese," I whispered. "And so passionate about their livers," John replied.

I was still wrestling with this conundrum when I realized that Madame was inviting us to stay for an impromptu tasting -- "une petite digustation." She rolled each syllable around her mouth like fine wine, and there was an anticipatory rumble of assent from the group. Remembering the quivering livers on the shelves and contrasting them with the lively geese below us, I panicked. Suddenly, an ear-piercing shriek rent the air. Madame recoiled in shock and the geese flapped their wings frantically. The baby had woken up. We murmured a thousand apologies, turned the stroller around and scurried from the room.

Rebecca Koffman is a freelance writer living in San Francisco.