Lieberman's God-fearing sermon was a cute political move -- and a debasement of both religion and civil society. 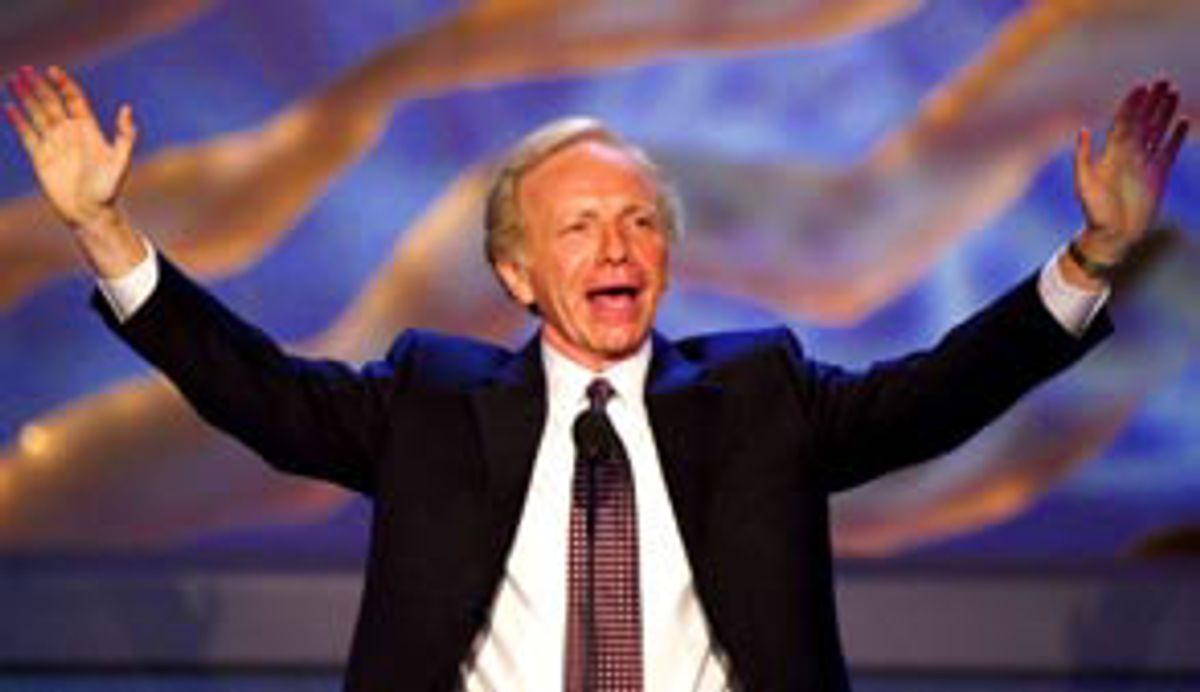 It was a play right out of the old Dick Morris "triangulation" playbook. With his pulpit-thumping exhortation to Americans to "reaffirm our faith and renew the dedication of our nation and ourselves to God and God's purposes" and find a "constitutional place for faith in our public life," Democratic vice-presidential candidate Joseph Lieberman simultaneously anointed himself holier than W. and made it clear to the crucial bloc of undecided born-agains that he wasn't one of those Woody Allen-type Jews, all nasal wisecracks and moral relativism.

It may have been a shrewd flanking move, although Hollywood will probably -- and correctly -- interpret Lieberman's sermon as an attack on its R-rated ways and may hastily zip up that most intimate of Tinseltown unmentionables, its pocketbook. And it may very well have been sincere -- making the doubtful assumption that you can use the word "sincere" to refer to pronouncements made by politicians about religion. But it is fundamentally pernicious. Like all attempts to drag religion into the public sphere, Lieberman's call for a heightened American religiosity erodes the church-state distinction that is one of the foundations of American civil society, cheapening religion by using it as a political tool and raising the specter of theocracy.

In time-honored fashion, Lieberman wrapped himself in the soothing mantle of the Founders to deliver his Khomeini-lite oration. "John Adams, second president of the United States, wrote that our Constitution was made only for a moral and religious people," he said, adding that "George Washington warned us never to indulge the supposition 'that morality can be maintained without religion.'" Not surprisingly, he failed to quote a far more important intellectual architect of American society, Thomas Jefferson, an Enlightenment deist who denied the divinity of Jesus, called Christianity "the most sublime and benevolent, but most perverted system that ever shone on man," and wrote "the interests of society require the observation of those moral precepts only in which all nations agree (for all forbid us to murder, steal, plunder, or bear false witness,) and that we should not intermeddle with the particular dogmas in which all religions differ, and which are totally unconnected with morality."

It would certainly not seem that the sage of Monticello would support Lieberman's assertion that "there must be a place for faith in America's public life" -- unless "faith" is stripped of all its "particular dogmas" (i.e. institutional religious content) and taken to mean simply the belief that it's wrong to kill or steal. But this is not what Lieberman wants to say: Even those depraved Hollywood hacks and atheistic Upper West Side pointy-heads subscribe to those "moral precepts." Lieberman is arguing something stronger: that institutional religion, not just generalized secular goodwill, is necessary for morality.

Leaving aside the minor church-state issue, this argument faces an immediate embarrassment: By all measures, Americans are the most religious people in the world. More of us attend church regularly, believe in heaven and hell, are Biblical literalists and are "born again" than people in any other industrialized nation. Yet somehow this orgy of institutional faith has not prevented us from killing each other, becoming alcoholics, taking drugs, committing adultery, turning a blind eye to the less fortunate, cheating on our taxes and abusing our children -- coming close to leading the world in many of those categories. Contra Lieberman, there simply does not seem to be any direct correlation between morality and religion. Are Americans more moral than Dutch people, or Danes? For every atheistic Stalin or Mao in human history, there is a devout Savonarola or Khomeini; for every occasion that religion has inspired acts of charity and love, there is another one in which it has been used as a justification for terror. The Crusades were not a high point in the history of the West, nor was the white man's largely successful campaign -- sanctioned by the concept of divinely ordained "manifest destiny" -- to wipe the original inhabitants of this country off the face of the earth.

Lieberman prudently avoids spelling out exactly what "place" faith should have in our public life (for the record, he doesn't necessarily support school prayer, but does favor a moment of classroom silence). In fact, his theocratic bark is worse than his bite: All he really wants, it seems, is a kind of national confess-the-spirit talking cure in which educated people, people "like us," can spread the Good News without being subjected to the titters and raised eyebrows of those convenient whipping boys, elitist secular humanists. "I hope it will enable people, all people who are moved, to talk about their faith and about their religion," said Lieberman, apparently unaware that the prospect of Americans talking even more about their deepest personal beliefs may not be regarded by everyone as an unqualified good. (Admittedly, the perspective is skewed here in California, where talking about your deepest feelings is itself a religion.)

It's when Lieberman reaches out to nonbelievers that the contradictions in his sermon become clearest. The senator said that believers must "reassure them that we share with them the core values of America, that our faith is not inconsistent with their freedom and our mission is not one of intolerance, but of love." But since those unbelievers have been defined in advance as being outside the mainstream of "the nation" and "the people," the Volk who are dedicated to "God and God's purposes," and since their belief structure is less conducive to resisting our "stagnating" moral life, one could forgive them for feeling just a little bit marginalized.

In the end, to be sure, Lieberman's religious rhetoric is empty: He doesn't advocate any explicit linkage between faith and action. For those who fear theocracy, this is reassuring -- but the emptiness of his rhetoric also renders the whole subject meaningless. The religious experience is the most intimate, ineffable, utterly personal one a human being can have: Why bring it up in a public context, as Lieberman did, unless you're going to tie it to some kind of action?

The truth, of course, is that the whole thing is just a stump speech. Exalting religion in the public square has become a received political gesture, a plastic, meaningless ritual, like denouncing terrorism or demonizing drugs. Unlike those subjects, however, religion is essentially a private concern. By blithely making it not just a matter of public debate but a campaign ploy, a tactic in the sterile, soul-deadening game of vote-grubbing, American politicians degrade and cheapen the very subject they are putatively celebrating.