The Dems have Hollywood's A-list; the Republicans are stuck with Bo Derek and Pat Boone. 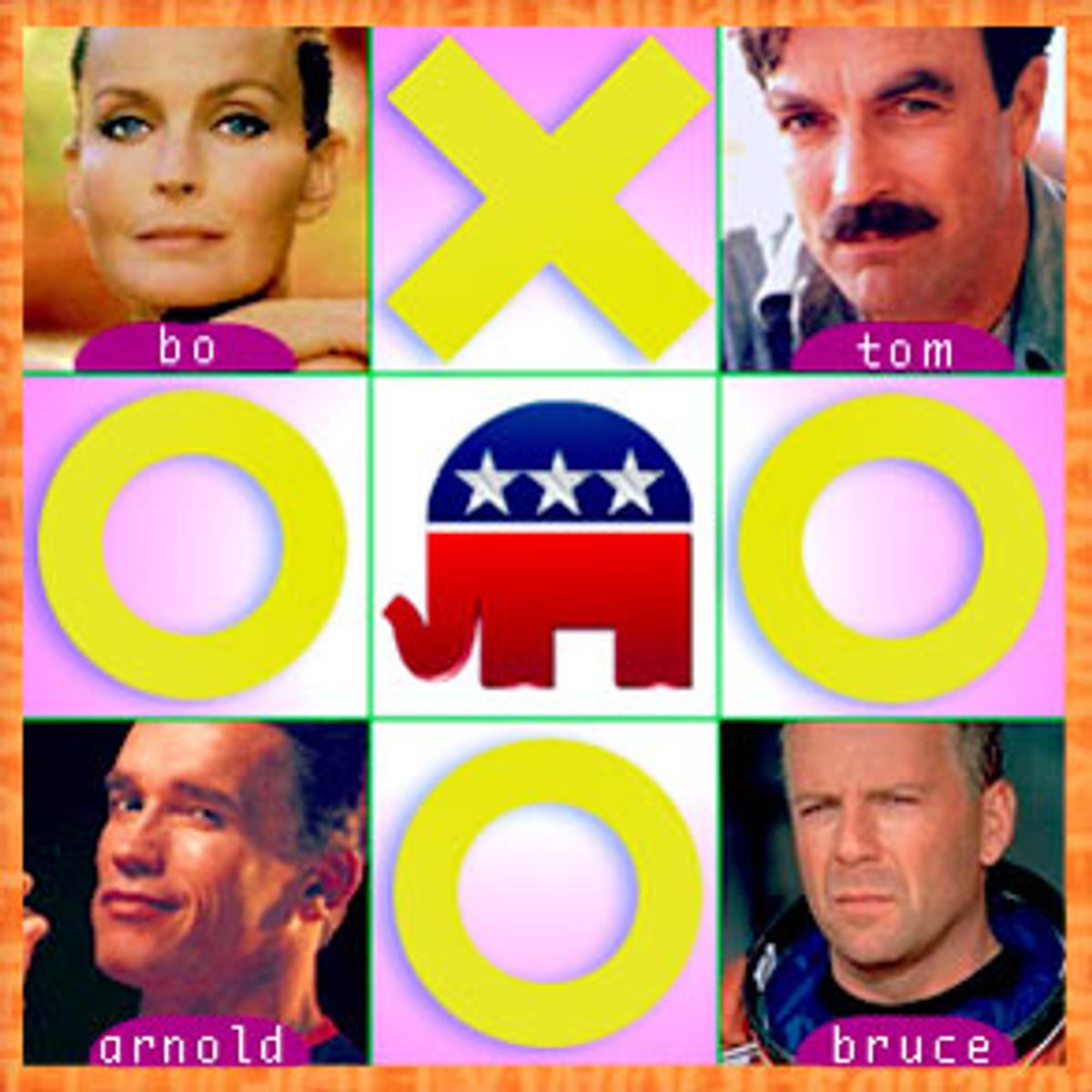 A great number of things are simply not done in Hollywood, and voting Republican is as ill-advised a career move as agreeing to guest on "Hollywood Squares." For people who spend a lot of time in yoga classes, the Industry's power elite can be more unforgiving than a coven of 19th century New York Dutch dowagers. One false move and, next thing you know, you're Lily Bart.

Consider Bo Derek: Once the subject of Dudley Moore's soft-focus fantasies (He used to be huge!), the actress' more recent credits include "Frozen with Fear," "Horror 101" and yes, "Hollywood Squares." Such vertiginous career lows cannot be attributed merely to hard work, perseverance and a profile in that obituary for the career dead, "The E! True Hollywood Story." It takes voting for a member of the Bush family to totally drain a girl of every last drop of employability.

"Hollywood [liberals] are very adamant and almost militant about their views," Bo Derek recently told the New York Post. "It's tough to have a nice, open conversation of any kind. People get really angry, and they treat me as though I'm some hateful monster. I have been told that I'll never work again."

"For all of our artistic inclinations," actor Tom Selleck told George magazine last month, "Hollywood has never been a very tolerant place."

The profusely mustachioed entertainer is alluding, of course, to the many drawbacks of living an openly Republican lifestyle in Hollywood; drawbacks so motivating that the onetime NRA pitchman (who recently played a Democratic candidate on TV) has refused bipartisan requests to endorse a candidate for president.

"I've been a registered independent for a decade," he told the Associated Press, "and in the last decade I've probably given as much money to Democrats as Republicans."

Not this year, though. According to a list of celebrity campaign contributors compiled by the Center for Responsive Politics, Selleck hasn't chipped in a dime to the 2000 electoral race. In fact, most prominent Republican celebrities appear to be somewhat reticent to sign their autographs on GOP-destined checks. Who can blame them? The GOP's list of celebrity contributors reads like a cautionary tale designed to make a grown ICM agent cry. Does a contribution to the Bush campaign inexorably lead to career death, or worse, a guest spot on "The Love Boat: The Next Wave 2"? The evidence speaks for itself.

Arnold Schwarzenegger and Bruce Willis were rumored to be scheduled to appear at the Iowa presidential straw poll in support of W., but something came up. Instead, the lineup included Johnny Morris, world champion bass fisherman; Kim Rhode, the 1988 Olympic gold medalist in skeet shooting; country music singers Tracy Byrd and Linda Davis; and Tejano music star Emilio Navaira.

"Those names [Willis and Schwarzenegger] were floated from other quarters," Eric Woolson, a Bush spokesman, told the Des Moines Register. "But this is a pretty darned good lineup. These are people that Iowans know and enjoy."

The good news is that massive A-list Republican defection from the campaign has left plenty of room at the top of the GOP contributor list for such shimmering talents as Loretta Lynn and those whose shimmer is, uh, more challenging to discern: Pat Boone, Joe Bonsall of the Oak Ridge Boys and Chuck Norris (who, coincidentally, stars in the CBS hit "Walker, Texas Ranger" as a ranger with "a heart as big as Texas").

Gore's contributors list, by contrast, is made up of people who get their calls returned: Warren Beatty, Nicolas Cage, Kevin Costner, Michael Douglas, Tom Hanks, Tommy Lee Jones, Jack Nicholson, Gwyneth Paltrow, Steven Spielberg, Oliver Stone and Barbra Streisand would all let Gore play with their Oscars, no questions asked. He could probably even borrow all 17 of them at once, put a pen and pad in each of their small golden hands and play White House press conference. Norman Lear, Matt Groening and David Geffen would think it was really funny. They could even call Ralph Nader, if there were no hard feelings, and have him bring over his generous friends Paul Newman, Susan Sarandon and Phil Donahue. How fun would that be?

More fun than hanging out with Craig Titley -- screenwriter, uncredited, on "See Spot Run" (2001) -- probably. Definitely more exciting than an invitation to the "LottHop," a party thrown during the RNC in honor of Senate Majority Leader Trent Lott, that featured Dick Clark and the Shirelles. The Republican Convention must have been murder on the Bush girls, who got Frankie Avalon and Chubby Checker as opposed to Karenna and Chelsea's Enrique Iglesias and Boyz II Men.

Where is Republican Jason Priestley when you need him?

Despite the pariah status that seems to be the GOP's lasting legacy to its screen idols, however, right-leaning candidates continue to reach for the stars. They can't help it! Celebrities have so far contributed $880,000 to the Gore campaign; and when Streisand recently hosted a party for the Gore campaign to raise $2 million, she wound up pulling in $5.2 million. (Living proof that inviting Babs over for a White House sleepover is well worth any number of fingernail wounds to the chin.) As political scientist Eric Shockman told the Milwaukee Journal Sentinel, political types have begun using Southern California as an automated teller machine. "You come to California, you go to your ATM. Not only are you going for the star appeal, you're going for cash. It's in one place."

Of course, it's hard to feel sorry for W., who has had more change thrown at him than the Trevi fountain. The $4,663,685 he received from the tobacco industry alone probably felt good; but try dropping the name Philip Morris at a West Coast cocktail party and chances are the hostess will ask you to pick it up on your way out. The name William Morris, of course, can be dropped with impunity.

All Morrises, after all, are not created equal.