Rebbecca Ray's novel, "Pure," written when she was 16, is a raw work of sexual exposure. Is it autobiographical? "Thank God it's not," she says. 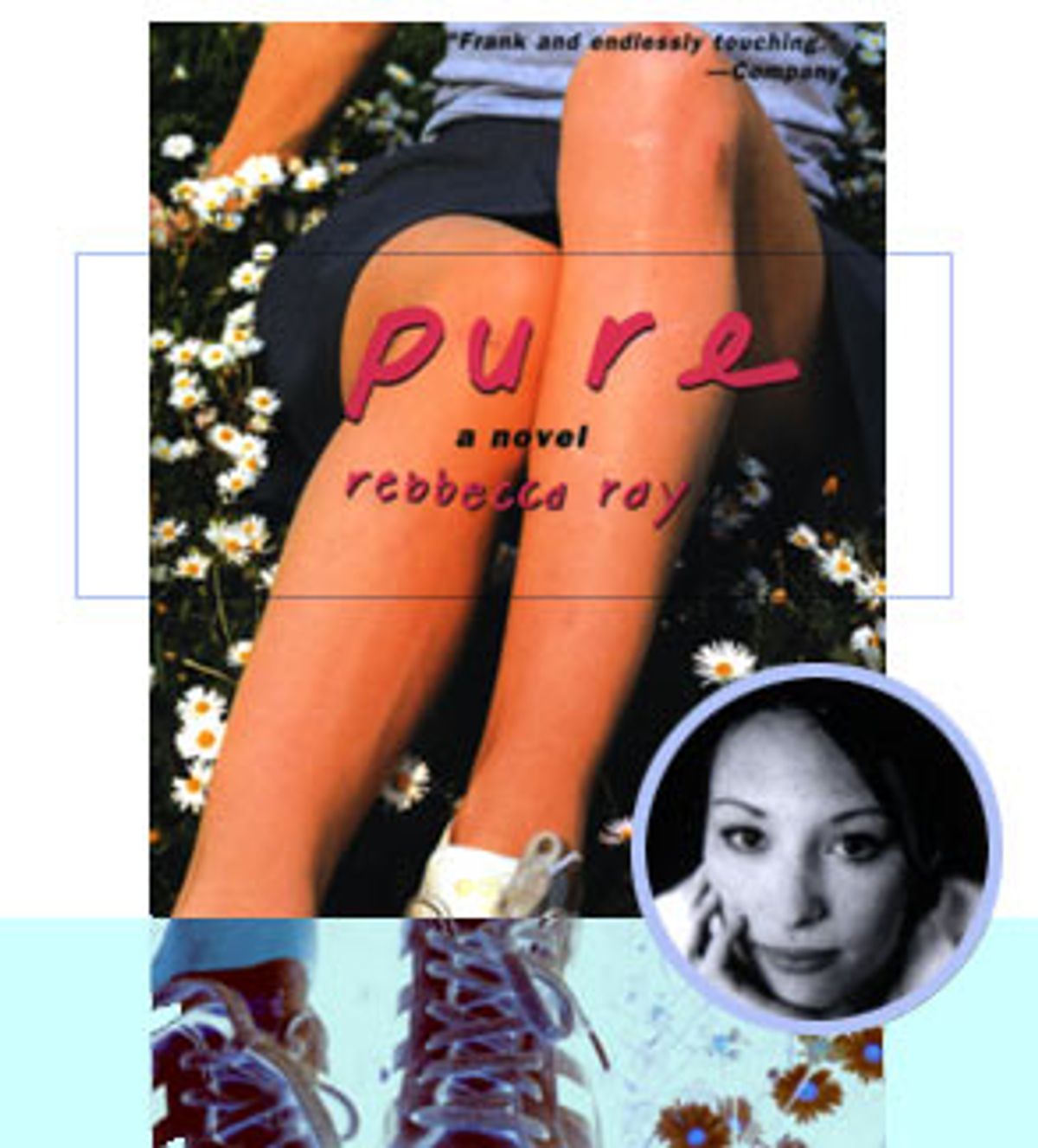 Rebbecca Ray and I are in a vintage clothing store looking at a pair of pale mauve high-heeled shoes. They're the strappy kind, almost sandals, with crossed fluted fronts and tiny ankle straps. Their round heels pucker into tiny spikes. We are entranced. Around us, as in an overstuffed, half-dusty attic, are piles of slightly aging toys, the relics of a circa 1980s childhood. There are Go-Go's posters, jelly bracelets, jars of glitter lipstick. And the toys are awesome things, the kind we used to love as kids, or maybe just wanted lots of: Pez dispensers, Barbie dolls and "Star Wars" action figures. Above our heads hang rows of tin lunchboxes with Raggedy Ann and He-Man on them. Ray's face lights up as she spots one. She claps. "She-ra," she cries, "Princess of Power!"

In a small hall, beneath Barbie and the lunchboxes, Ray is trying on the high-heeled shoes. Her toes are only halfway in. She looks up at me, quizzically. "They look like they'll hurt," I say. "Try these for pain," Ray says, handing me one of the gold stilettos she has been in all day. It's a gorgeous skinny thing; she wears it well. She gets her last toe in. She wobbles up, then turns to show me. "I don't think they'll be any good at the ball," I say, "they've got to fit." "They'll stretch," she says, peering down at her feet.

Ray is barely 20. It has been two years now since she published her first novel, which in her native U.K. is called "A Certain Age," and in the U.S. is called "Pure." After selling 100,000 copies worldwide, it's being released in the U.S. this month, and she's on her first trip to the States to do publicity, read and give some interviews. The tour has been a bit upset: She came down with the flu on the first day and hasn't stopped throwing up since. She didn't even get to do her reading at the Barnes & Noble here or go to her publishing dinner at Pastis.

She has taken this well, though, very graciously, and came back to the city early and still a little sick to do this interview. By the time I finally meet her, she looks somewhat worn around the eyes, but mostly sweet, and very self-possessed.

"I was puking all night," she says, and tells the story of a man she'd barely met holding back her hair when she vomited. "I was surprised he stayed around," she said. "I looked fucking awful." I try to imagine this. Everything she's wearing seems to be half-toy, half-sexy, and kind of flip. Her baggy jeans have rhinestones on them. She has on spangly heart-shaped glasses, Lolita style, a yard-sale rainbow tank top and the kind of shawl that couldn't keep much of anything warm. She looks great.

Although there are a lot of books about teenagers, what makes Ray's unusual is that she was 16 when she wrote it. So it reads as a raw confessional of a painful, funny phase of growing up. People always ask whether it's autobiographical, which is exhausting, she says. "Thank God it's not." All authors say this, but this book is definitely the kind a writer would want to get some distance from, especially considering its intimate, first-person tone.

The book heaves off with the words "I was thirteen when I started letting boys feel me up" and ends up in the nebulous territory of its 14-year-old narrator losing her virginity to a 27-year-old radio salesman. He hits her. She does speed with him. In the meantime, she fights with her parents, cuts herself and gives blow jobs to boys whose sweaty smell and zitty skin leave her repulsed.

There is a sad apathy here:

I pushed Oliver's trousers down to round his hips. I didn't look at what I was doing. I just didn't want to see. I felt his hands move from my chest. Down, over skin. My stomach and further. I felt him push my trousers down as well. The elastic of my pants was stretching. And then I felt him touch me.

It wasn't nice. Not really. But when I thought about it, it wasn't quite as bad as Robin. At least I didn't hate him. And I didn't think he'd laugh. His fingers moved in. Not gentle. Not roundabout like he had been with my tits. I guess it was do or die by now, though. I guessed he might as well.

He put his finger inside. Burning and stretching but he didn't seem about to stop. It hurt. It hurt a lot. But it didn't matter. I suppose that nothing ever matters, not really. I tried to think of biting and it got a little easier.

I felt his hips shift downwards and my eyelids ached from shutting them so hard. Two fingers, and the nails caught. Down further with his chest pressing hard, squashing my tits. I tried to breathe easy, I tried to breathe slow. Suck it. The feel of a handkerchief scratching on my lips. Teeth, I thought. Teeth.

But when he fucked me, there was nothing in my mind.

These are the high points, the kind of things that got her lots of English press. But in between, in small moments, her book captures the ambiguous territory of teendom with warmth and almost wistful humor. Ray wrote the book after dropping out of school. "I had to," she says. "I was just miserable." But then, almost hastily, she adds, "It's a missive from adolescence. I can't have that voice anymore: I don't even think I could if I wanted to. Thank God," she says again. "The voice was all about being 16."

If, at the ripe age of 20, she has an enormous self-confidence, Ray also has a way of casting her eyes aside and sort of picking at her nails when she starts to talk. "I used to take on enormous projects when I was a kid," she says. "I started novels even then. I guess I really stopped when I turned 14 or so." "What did you do instead?" I ask. "Oh, you know, the usual," she says, "took drugs and had sex. You know." I point out that 14 is the age of her character at the beginning of the novel. "I guess they're kind of related," she shrugs, fingering a strand of hair that has come loose.

The novel she wrote is a raw act of exposure: not necessarily of Rebbecca proper, but more of a taut, untempered voice experiencing a hurtful time. It is not, in many ways, what might be called a good novel. It's unpolished, and it's very young. At times it reads, with its uncontrolled, leggy plot, rather like a journalistic pen writing faster than its thoughts come clear. But it gets all the settings right: the dilapidated bathrooms in the run-down school, the horror of letting some dumb guy finger your crotch and having him find you on your period and the feeling of coming home to parents who at best seem well-meaning and at worst are wholly unattuned.

The narrator writes about her friend Dawn: "She'd been born with a hole in her heart, which I thought sounded kind of romantic. The scar down her chest wasn't romantic, though, it looked a bit like Frankenstein. She was allergic to every animal I'd ever bothered to ask about, but her mum didn't seem to mind. She kept two dogs and four cats and Dawn spent her whole life walking around the edges of rooms to avoid them."

It's this tough, yet fragile, balance between raw exposure and extreme self-consciousness that Ray gets right. And what might be characterized as the novel's emotional vagueness may also be its best-grasped truth. It is a voice that seems totally uncertain of how to judge what's happening to it; it's an act of self-exposure that seems unable to control what gets exposed.

And that is why the book is sad, honest, funny. In the eyes of its narrator, disgust seems sexy, grossness is de rigueur and pain, well, pain is part of fitting in. We're never made certain, for example, what the 27-year-old guy sees in her or what she really wants from him, except perhaps just to be wanted. He seems to know, and that's enough. She sleeps with him. The sex is bad. He never even fully takes his pants off, and when they're done, he asks her to get dressed again so quickly she's not even sure it happened.

But what has happened has opened her and it hurts, and she's full of the kind of self-mocking, take-no-prisoners pain that makes you want to wince: "I would be in love with him, wouldn't I? Of course I would. He'd just fucked me." It's like a laceration, this act of exposure, like the narrator cutting herself. You wince for this girl. But perhaps you wince for yourself, as well, because in some way you've been there, on some lumpy couch, fumbling toward obscure maturity.

The book is full of these awkward, somewhat unacknowledged landmarks, like rites of passage that, however hoped for, seem flat when they finally come. Flat, or worse, like bruises. If you're not still 16 when you read it, the book can make your skin crawl.

But did Ray set out to shock people? "Absolutely not," she says. "The odd thing to me always was that to teenagers it was a novel about people. And to more grown-up types it seems like a novel about teenagers. And I'm left wondering what the big difference is.

Which brings me, there with all the toys around us, to wonder where the fine line between, say, 16 and 22 is, and to ask what those years do. "I'm happier," she says. "I can't say what's come clear, but a great deal has."

Ray doesn't buy the shoes. We decide that even if they fit, they might still look too small or not be worth the pain. But she has picked out something for me, a sweater tank dress with only one hole, which she assures me will be easy to mend. I decide to buy it.

Tess Taylor is a New York writer working on a book of short stories.