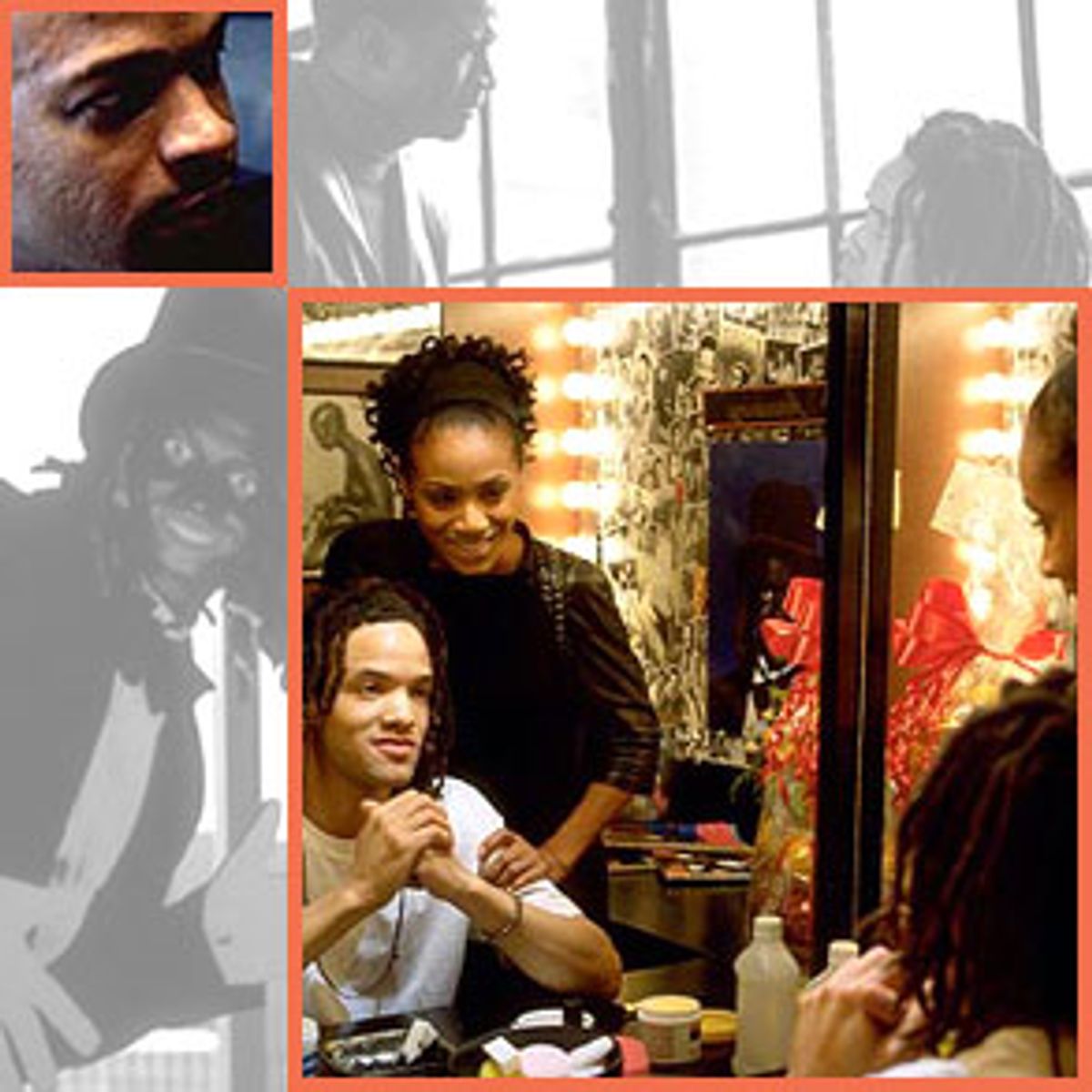 Why have just one moral when you can have two? Spike Lee has never been the subtlest of filmmakers, but "Bamboozled," like most of his work, virtually overflows with ideas, perhaps more of them than he can handle. As this explosive media satire -- certain to be one of the major talking points of the fall movie season -- draws to a close, TV writer Pierre Delacroix (Damon Wayans) reflects on a quotation from James Baldwin: "People pay for what they do, and even more for what they have become." Then he remembers advice from his father, a former star comic now reduced to playing small clubs in black neighborhoods: "Always keep 'em laughing."

The story of Delacroix, an uptight buppie with a Harvard coffee mug and a dubious Francophone accent who creates a nightmarish blackface minstrel show for his fictional TV network, lies in the tension between those two potential epigraphs (or epitaphs, as the case may be). Anyone who thinks Lee is a dogmatic black racist won't be convinced by anything I have to say, and may as well turn off the computer and go back to the Wall Street Journal right now. Others will find "Bamboozled" to be a fascinating, enigmatic and, yes, shocking film, a near masterpiece ambiguously balanced between brilliance and incoherence.

On one hand, it's a furious protest against the persistent media stereotyping of blacks (or "Negroes," as the persnickety Delacroix always says) that has existed throughout American history. But Lee also suggests that blacks have become conscious and unconscious collaborators in the perpetuation of these stereotypes and must bear some responsibility for it. Delacroix's "New Millennium Minstrel Show" is sponsored by a malt liquor called Da Bomb (it comes in a bomb-shaped bottle with fins), whose commercial features a posse of writhing rappers urging viewers to "get your freak on."

Finally, although race is the proximate subject of "Bamboozled," its ultimate subject is the mass media as a soul-destroying force of corruption and conformity that turns all intentions, good and bad, toward its own ends. One can certainly argue that this view is overly simplistic -- contemporary television is a complicated and rapidly changing realm -- but the totality of Lee's scabrous vision here is marvelously executed. In fact, "Bamboozled" is finally a classic satirical broadside against anyone and everyone in the media, made partly in homage to Elia Kazan's "A Face in the Crowd" (Lee's dedication is to Budd Schulberg, the legendary screenwriter who wrote that film) and Sidney Lumet's "Network."

"Bamboozled" is entirely shot on digital video, and maybe that has some thematic resonance in a film about television. But I'm starting to feel that this new format is already a hackneyed device whose harsh shimmer and fuzzy edges are meant to convey authenticity. (Lee is now an old hand at DV, having used it for his hit concert film "The Original Kings of Comedy.") Cinematographer Ellen Kuras moves the ultralight cameras gracefully enough, and the colors are less pallid and peculiar than often happens on video. Still, when you can afford the honest-to-God crispness and luster of motion picture film, why settle for something that doesn't look quite as good?

I don't quite know how to feel about Wayans' performance. With his bespoke tailoring, Pilates classes and borderline-effeminate mannerisms, Delacroix at first seems to belong to a thin "In Living Color" sketch about a social-climbing black professional eager to forget his roots. After auditioning an angry, Afrocentric rap act called the Mau Maus for his variety show, he shudders and tells his assistant, Sloan (Jada Pinkett-Smith), in his fastidious, unplaceable English, "Frightening. I don't want anything to do with anything black for at least a week."

As gradually becomes clear, however, Delacroix's entire personality pretty much is a performance, constructed as much for his own benefit as for the outside world's. He's no more a real person than is the brand-name-obsessed serial killer of "American Psycho." I shouldn't give away too much of the story, so let's just say that Delacroix is a sort of self-invented Negro Gatsby who isn't really from Haiti or France or Quebec or West Africa. When he visits his father, Junebug (Paul Mooney), after the latter's nightclub performance, Junebug asks him, "Boy, where the fuck did you get that accent?"

Satire is not entirely new to Lee's work, but one of his greatest accomplishments in "Bamboozled" is a Swiftian ruthlessness; other than Sloan and Junebug, both fairly minor characters, there are no heroes in the film and hardly anyone who's even halfway genuine. If Delacroix is fleeing from blackness, his boss at the network, a jive-talking white boy named Dunwitty (Michael Rapaport) whose office is decorated entirely with photos of black sports heroes, is running in the other direction. Insisting he has the right to say "nigger" because of his black wife and biracial kids, Dunwitty tells Delacroix his material is neither "dope" nor "fresh," adding, "I'm blacker than you, brother man."

Dunwitty is an odious buffoon, but he's right that Delacroix -- whose last, failed show about "dignified middle-class Negroes" was called "Brown-Nose Jones" -- is fatally confused and out of touch with his own anger. (I'm sure it's true that even wannabe-homeboy network execs spout those kinds of clichis these days.) Thus challenged, Delacroix responds with his idea for a new show that will be "different," "impactful" and "cutting edge": black actors in blackface and classic minstrel get-ups, playing "real coons" who sing, dance and cavort in a watermelon patch.

"Mantan: The New Millennium Minstrel Show" really has to be seen to be believed; I suppose it is too outrageously offensive for real-world television, but probably not by much. Delacroix recruits a couple of sidewalk performers named Man Ray (Savion Glover, the dancer and choreographer behind "Bring in 'Da Noise, Bring in 'Da Funk") and Womack (Tommy Davidson) and rechristens them Mantan (after Mantan Moreland, a black actor famous in the 1940s) and Sleep 'N Eat, respectively. Their supporting cast includes characters named Aunt Jemima, Li'l Nigger Jim, Sambo and Rastus, along with a band called the Alabama Porch Monkeys (played by the Roots).

When we watch Mantan actually burning corks in alcohol and applying the resulting sludge to his skin (over a layer of cocoa butter), "Bamboozled" suddenly drops out of its frenetic satirical mode into a sudden, and agonizing, moment of historical insight. Mantan is supposed to be an inarticulate guy eager for the big time: "As long as I'm hoofin' and gettin' some loot, I'm good," he tells Delacroix. But you can virtually taste the bile rising in Glover's throat as he puts on the mask of blackness, or at least the invented version of it that has hypnotized our society since it began.

Every so often, dreamlike streams of images -- from "race films" and classic Hollywood, from cartoons and newsreels, from "Amos 'n' Andy" and "The Jeffersons" -- break through the surface of "Bamboozled," as if the film's subconscious (or Delacroix's conscience) were acting up. I can already hear Lee's critics protesting that this onslaught of racist archival material tries to bully the audience into emotions of guilt or rage. Mind you, these are probably the same people who argued that "Do the Right Thing" would incite race riots; the troubled emotions they're worried about are mostly their own. As a technique, this reminds me of the fragments of early cinema that interrupt Ingmar Bergman's "Persona," but its import, I think, is not as difficult to understand.

This array of shuffling servants, kerchief-clad mammies, grinning cartoon "pickaninnies" and jive-ass pimps is almost overwhelmingly painful to watch. Lee's point, as I read it, is that all Americans, white, black and otherwise, have been indoctrinated by relentless decades of these stereotypes. The classic blackface minstrel shows of the 19th century, and most subsequent ideas about blacks, were driven by envy almost as much as contempt. Black caricatures like Mantan and Sleep 'N Eat are ignorant, lazy and unlucky (as Delacroix explains to the delighted Dunwitty), but they're also free of the restraints and obligations of white society. These depictions of blackness, shaped by a poisoned history that is neither long in the past nor far below the surface, have seduced blacks and whites in different but interrelated ways. We ignore that history at our peril.

Lee keeps both sides of his razor sharp throughout "Bamboozled," something he hasn't effectively done in earlier films. Sure, the minstrel show is appalling, but it's also undeniably hilarious at times. When the Mau Maus, who have set themselves up as the radical opposition to Delacroix's reckless Uncle Tom-ing, watch the show with expressions of dour disapproval, one of them can't help cracking up. Delacroix's rationale for his show is not too different, one imagines, from Lee's rationale for his movie: "Martin Luther King did not enjoy seeing his people beaten on the 6 o'clock news," he says. "But white people needed to see it." (Earlier, he quotes Mark Twain to the effect that satire may be a tool that can help forge racial harmony.)

As for the Mau Maus, Lee paints them as only slightly less ridiculous caricatures of blackness, in their gold chains, 'do rags and baggy FUBU jeans, than Mantan and Sleep 'N Eat. Sloan's brother Julius (rapper Mos Def), who now calls himself Big Black Africa, is the group's leader, and the best he can do by way of philosophy is to insist, "We talking about getting free in America, USA, KKK, all that shit." Like everybody else, Big Black's real agenda is to get on TV; if the Monkees and the Partridge Family could get their own shows, he asks Sloan, why can't the Mau Maus? The band's major militant insight, fueled by plenty of ganja and bottles of Da Bomb, is that the letter "c" must be removed from the word "black." (Mysteriously, one member of the group, played by rapper MC Serch, is white -- a fact that nobody seems to notice until it suddenly and shockingly becomes relevant late in the film.)

As Delacroix's minstrel show becomes a smash hit -- despite protests led by Al Sharpton and Johnnie Cochran -- members of the studio audience, whether white, black, Latino or Asian, start showing up in blackface and proudly proclaiming themselves "niggers." With his customary desire to pack all his thoughts and observations about the world into a movie, Lee drives his story into hallucinatory excess, as if searching for the perfect apotheosis of all his themes. Delacroix gradually goes insane, surrounded by his increasingly ominous collection of vintage racist toys. Mantan is kidnapped by the Mau Maus, and we get tossed-off commentary on everything from Tommy Hilfiger to Rudy Giuliani's housing policy to the Amadou Diallo shooting.

Lee's title is drawn from a speech by Malcolm X that he sneaks into one of his montage scenes (as seen in his own 1992 film). "You've been hoodwinked," Malcolm tells his Harlem audience. "You've been had. You've been took. You've been led astray, run amuck. You've been bamboozled." Is this a different way of expressing Junebug's cynical maxim: "Every nigger is an entertainer"? Is there no difference between the obsequious clowning of Stephin Fetchit and a millionaire gangsta rapper? "Bamboozled" is Lee's richest, angriest, funniest movie. But if it were rhetoric rather than film, it would be a flood of furious questions, most of them, like Pierre Delacroix's dilemma, irresolvable.