A drug sting case in a small Texas town shows how drug war paranoia can feed the fires of injustice. 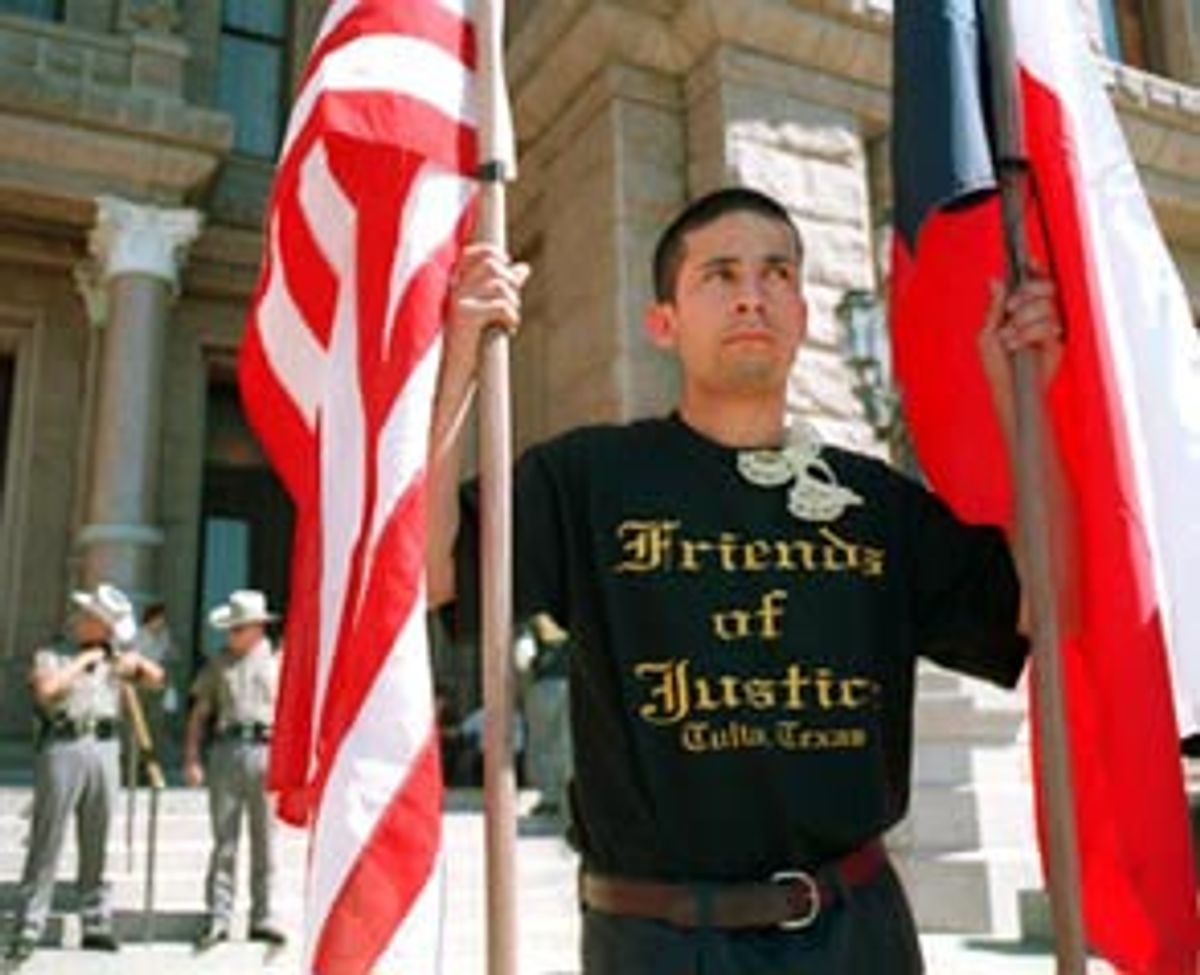 As Salem was to witch-hunt hysteria, so is the little town of Tulia, Texas, to our modern version of the witch hunt, the drug war. In his classic play "The Crucible," Arthur Miller captured the way a mixture of fear, paranoia and bad laws led to a horrific miscarriage of justice in 17th century America. To explore the 21st century equivalent of this madness, someone -- David Mamet? Anna Deavere Smith? -- should dramatize what is going on in this rural community of 5,000, best known until now for its livestock auctions.

In July 1999, following an 18-month undercover sting operation, 43 residents of Tulia were arrested in an early-morning drug raid. Forty of them were black -- an astounding 17 percent of the town's entire African-American population of 232.

Almost all were charged with selling small of amounts of cocaine -- worth less than $200. But as the cases went to trial -- most without a single black on the jury -- and the convictions mounted, the sentences looked like something out of the Gulag-era Soviet Union. First-time offenders with no prior convictions -- a status which could have made them eligible for probation -- were locked away for more than 20 years. One man with a previous drug conviction was given 435 years in prison; another got 99 years.

By the end, Tulia had become a crucible for the drug war. These were clearly not big-time drug dealers. In fact, when they were arrested, no drugs, drug paraphernalia, guns or caches of money were found. Only a few could afford to make bail; none was able to hire a lawyer.

As Miller wrote about Salem: "The human reality of what happens to millions is only for God to grasp; but what happens to individuals is another matter and within the range of mortal understanding."

What happened to the 19 men and women convicted of witchcraft in eastern Massachusetts began with the accusations of children. The convictions in northern Texas were based on one accuser, Tom Coleman, a white undercover officer who was working as a welder when he landed the job in Tulia. His accusations were uncorroborated -- he had no audio tapes or video surveillance of his drug buys and no eyewitnesses to back up his version of events.

Only in an atmosphere of drug-war hysteria could so many rules of evidence be so willfully cast aside and institutions that would normally function as watchdogs become swept up in the frenzy. The morning after the arrests, the Tulia Sentinel described the suspects as "known dealers," "drug traffickers" and "scumbags."

So much for a free press. So much for the presumption of innocence. So much for an untainted jury pool. As happened in Salem, the powers that be defined reality -- witches (drug dealers) are rampant among us! -- and then identified those who had to be purged to protect all decent people. To dissent from the prevailing view was to join the outcasts.

Anything that did not fit into the preordained outcome, including the many questions about the accuser himself, was simply ignored.

In the middle of Coleman's sting operation, the Tulia police received a teletype with a warrant for his arrest from Cochran County, where Coleman had previously worked as a deputy sheriff. He had been charged with theft and leaving thousands of dollars in unpaid debts in his wake when he skipped town. Unlike those he accused in Tulia, he was never jailed and, shockingly, was allowed to continue conducting the Tulia operation. In fact, his word continued to be trusted by the prosecution after he perjured himself by testifying that he had never been charged with anything worse than a traffic violation -- even after one of the black men he accused was able to produce an unassailable alibi.

Yet the world would never have heard of Tulia had it not been for another man, Gary Gardner, a rotund, self-described redneck farmer and former cop with a fondness for salty language. He alone refused to stay silent. "I just worked the facts, and the facts show that a lot of these people aren't guilty," said Gardner, who referred to one of the trials as a "lynching."

"There were moments," Miller wrote about Salem, "when an individual conscience was all that could keep the world from falling apart." In the Tulia case, Gardner's conscience led to the story breaking wide open. And in late September, the ACLU filed a federal lawsuit. The suit -- which the NAACP is joining this week -- charges local officials with "a deliberate plan, scheme and policy of targeting members of the African-American community" as a way of "removing them from the area using the legal system."

Tulia is on its way to becoming a cause cilhbre, with front-page stories appearing in major newspapers this past weekend. A protest rally was held in front of the Texas state Capitol, and the pressure is mounting on Gov. George W. Bush to take a stand.

As Evan Smith, editor of Texas Monthly, told me: "There was a collective gasp in the state. Then again, this is a state in which James Byrd was dragged to death behind a pickup truck. Tulia is as much a story about race as how the drug war has gone crazy."

On Friday, Bush called the drug war "one of the worst public-policy failures of the '90s." This was supposed to be an indictment of the Clinton/Gore administration for not being tough enough. But as Tulia -- in the governor's own backyard -- chillingly proves, the problem is not that we are fighting the drug war, as he put it, "without urgency, without energy." It's that we are fighting it without logic, common sense, morality, fairness, justice -- and compassion.

"People were being torn apart, their loyalty to one another crushed and ... common human decency was going down the drain." That was Miller about Salem and the witch trials. But it could have been about Tulia and the tragic consequences of the drug war.