Long ago, Poppy and Bar's boys were mere lads, sitting around the table learning the art of conversation. 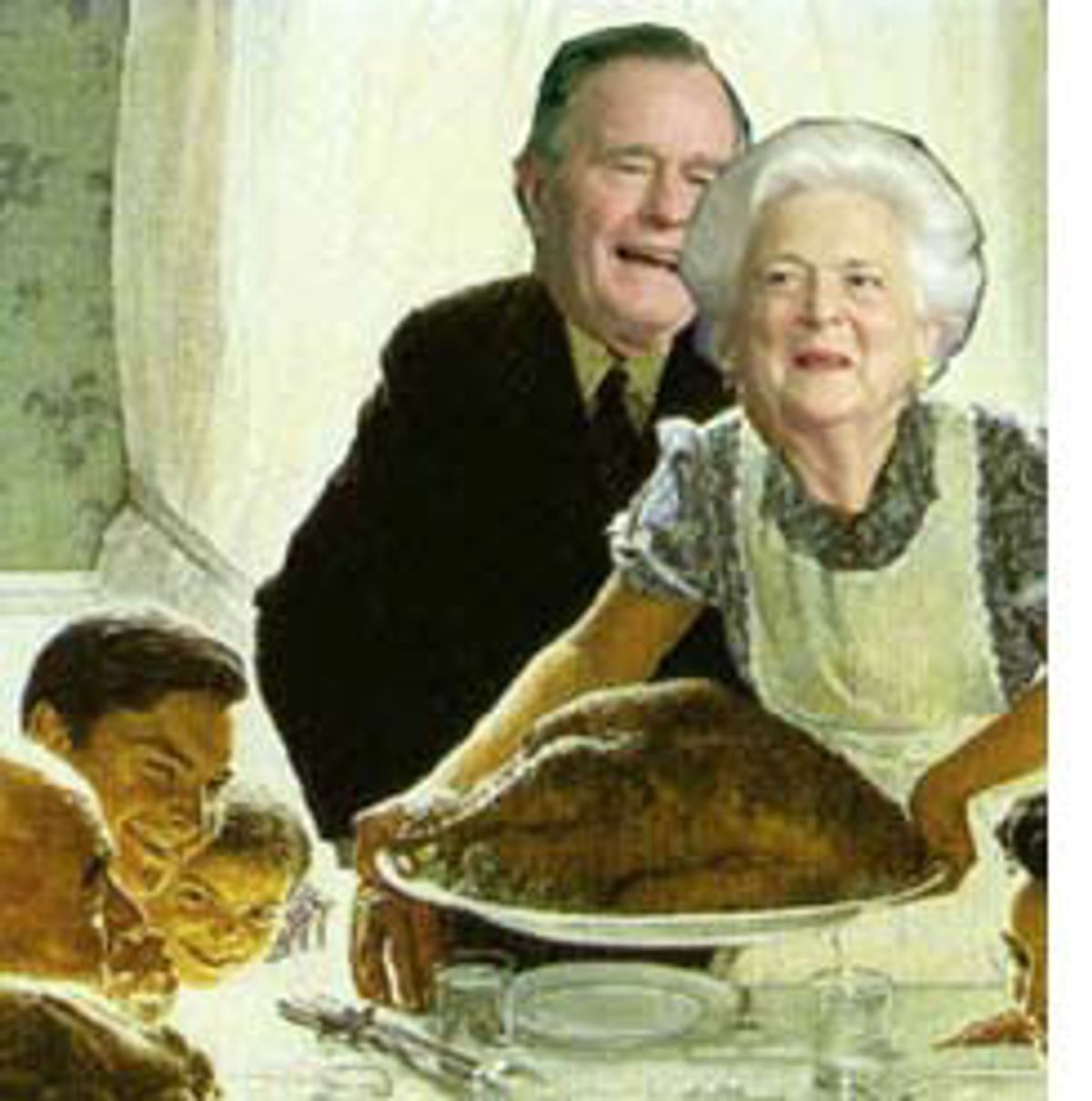 Early evening, the dining room of a large house in Midland, Texas, November 7, 1963. The Bush family (Dubya, 13; Jeb, 6; Neil, 5; Poppy and Barbara, indeterminate) are gathered around the table, pretending not to be rich. Dubya, in a tricolor propeller beanie cap, bears a strong resemblance to Alfred E. Neuman. Cherubic Jeb and Neil sport matching footie pajamas. The family's heads are bent in prayer. Steam rises picturesquely from platters, obscuring Mrs. Bush from view.

Outside, on the desolate prairie, a lone Chihuahua yelps.

Poppy: So tomorrow will bring another tidal wave. So keep your snorkel above the water level, and do what you think is right 1.

The Bush family digs in. They chew in orderly, Episcopalian silence.

While the elder Bush struggles to enunciate, Dubya deftly drains his daddy's martini.

Barbara passes the peas from behind a veil of condensation.

Outside, on the desolate prairie, a lone Chihuahua is swept off its feet by a sudden, violent squall. It whips past the picture window in a bug-eyed blur.

Dubya: I know, Poppy! It means "howdy" in Grecian!

Little Jeb turns red and throws down his monogrammed baby spoon. It lands with a thud in his big brother's potatoes. Jeb kicks Dubya under the table.

Jeb: It does not mean "howdy" in Grecian, you blunted reprobate. It means "until we meet again at the bordello" in colloquial Spanish, right, Poppy?

Poppy nearly gags on his broccoli. Agitated, he looks to Barbara for support, but she has just lifted the cover off a bowl of steaming potatoes and is momentarily obscured from view. Poppy stammers uncomfortably.

Poppy: I -- I -- I -- just am not one who -- who flamboyantly believes in throwing a lot of words around 2. To kind of suddenly try to get my hair colored, and dance up and down in a miniskirt or do something, you know, show that I've got a lot of jazz out there and drop a bunch of one-liners -- I kind of think I'm a scintillating kind of fellow 3. And some of that may have spilled on Dubya.

Barbara: What your father means to say, Jeb, is that Dubya doesn't always make sense, but we love him just the same.

Dubya's eyes narrow. He leans in close to his little brother.

Dubya: Guess what, if I'm the president, we're going to have gag orders 4.

Dubya: (aside) They have miscalculated me as a leader 5.

Suddenly, little Neil shrieks and knocks the bowl of broccoli onto the floor, where it shatters.

Poppy: That's it. No more family jewels where that came from. It reverberated in the negative there. Boom! Crash. Allowance. Docked.

The family looks at him, blinking. They all speak simultaneously:

Poppy (to Neil, sharply): Your snorkel will fill up and there will be no justice 6.

Poppy hands Neil a five-dollar bill. The baby stuffs it in his mouth and swallows before Barbara can fish it out.

Poppy (rummaging in his pockets for more money): I put confidence in the Bush children and their ability to decide what is edible and inedible, tasty and untasty, germ-ridden and ungerm -- (coming up empty) Uh-oh. Busted. Flat. No mas. Dollars. Hasta la Chihuahua.

Jeb (worried): I take after you, right mom?

Barbara (from behind a misty cloud): Let's hope so, dear.

Suddenly, baby Neil reaches up, grabs the apple pie and sends it flying across the room.

Dubya: We ought to make the pie higher 8.

Jeb gets up and walks around to the other side of the table where his younger brother is sitting. He grabs him by the shoulders and shakes him, hard.

Jeb: When you do something wrong, bad things should happen to you. We have to build a prison system big enough to put the bad people away long enough for our fear to subside. And then when prisoners go to prison, we'd better make sure that it's not soft time, and it isn't something more comfortable than the folks who live outside the prison who are working hard and playing by the rules. It should be hard time. We should require work. Prisoners ought to be building the prisons, they ought to be growing the crops, they ought to be cleaning up the highways. We don't punish young people. That should be at the core of our juvenile justice system. We should have punishment being the overriding philosophy in how we deal with children. That means more boot camps and fewer basket-weaving classes 9.

Neil is stunned into silence.

Poppy (oblivious): If you want to have a philosophical discussion, I take your point, because I think it is important that if we -- if you presented me with a hypothesis, "You've got to do this or you've got to do that," and I would accept it and understand the political risks that'd be involved if I showed any flexibility at all in even discussing it -- I would have to say that -- that a -- that you make a very valid point in your question 10.

Jeb: What do you talk about when you're not talking about politics?

Poppy: Wouldn't be prudent. At this juncture.

Poppy: Period. Future. Now. Any time. Nothing. Not going to talk about it 12.

Neil pulls the tablecloth out from under the spread. Food flies everywhere, dishes shatter.

Barbara (sighing): You have to love your children unselfishly. That is hard 13.

With a sigh she disappears behind a plume of curling vapor, as the music rises in a great glissandi of sound and the curtain falls.

1) G.H.W. Bush during a question-and-answer session aboard Air Force One, on forthcoming budget negotiations. May 11, 1990.

3) G.H.W. Bush defending his own particular brand of charisma to reporters in Ohio during a campaign stop. April 26, 1988.

6) G.H.W. Bush before the Disabled American Veterans in Washington D.C., on the difficulty of keeping up with presidential duties. Sept. 12, 1991.

7) G.H.W. Bush to employees of the Liberty Mutual Insurance Company in Dover, New Hampshire, stressing the importance of prayer. Jan. 15, 1992.

10) G.H.W. Bush at the American Business Conference in Washington, on the inadvisability of shifting the tax burden from producers to consumers. April 4, 1989.

11) G.W. Bush asked by the Hartford Courant in 1998, "When you're not talking about politics, what do you and your father talk about?" George W. replied without hesitation, "Pussy."