There's nothing scarier than a group of hormone-crazed 20-somethings, but this sequel isn't much more than a footnote of a footnote. 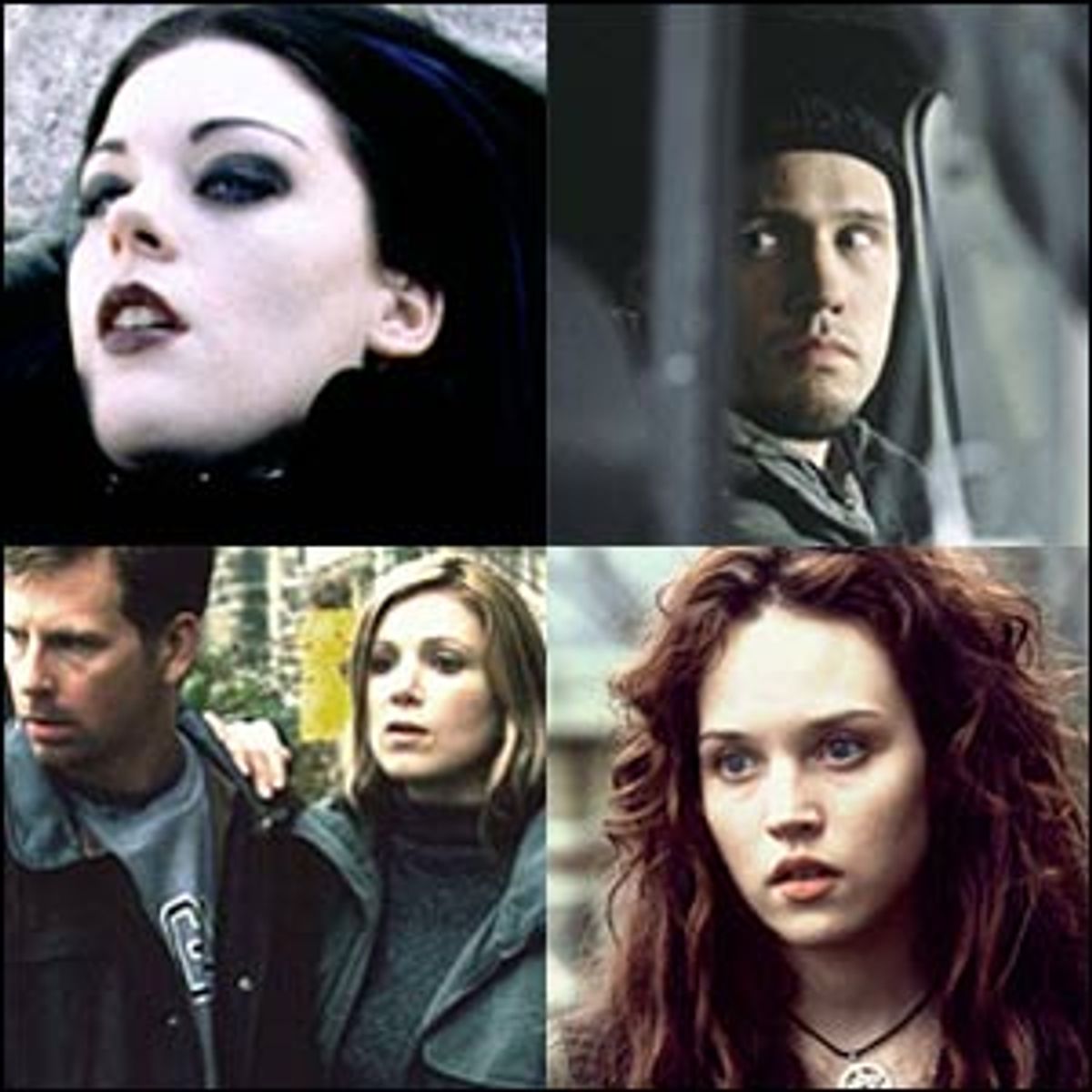 How do you follow up a fluke? Not only was "The Blair Witch Project" a one-time-only cult phenomenon, simultaneously exploiting general bewilderment about the supernatural, the Web and the truthfulness of documentary-style video, but the cult disappeared almost as quickly as it blossomed. By now the original "Blair Witch" film already seems like an intriguing footnote to movie history, rather than the birth of a new sensibility or a new mode of production.

So I guess that makes "Book of Shadows: Blair Witch 2," for all its ingenious efforts to deconstruct and reconstruct itself, a footnote to a footnote. It's a movie fighting a battle it can't win, attempting to escape its destiny as an ordinary horror film, albeit one with a mild dose of postmodern whimsy and the ghost of a social conscience. (Think "Scream" meets "sex, lies, & videotape" crossed with "Fight Club," although all those films are surer afoot than this one.) Genre fans will appreciate the bravery of the struggle, along with the references to "The Exorcist," "The Omen," "Evil Dead" and other classics. The general public, I imagine, will take a curious peek over the next couple of weeks, and turn away with a shrug.

Entrusting the "Blair Witch" sequel to Joe Berlinger, co-director of such brooding documentaries as "Brother's Keeper" and "Paradise Lost: The Child Murders at Robin Hood Hills," was at the very least an interesting gamble. Instead of a fake documentary made by a couple of film-school prodigies, "Book of Shadows" is a straightforward fiction film made by a documentarian (with a few bits and pieces of actual documentary). While "The Blair Witch Project" opened by insisting that its story was true, "Book of Shadows" begins by acknowledging that it isn't, or at least hedging the question. The opening titles read: "This is a fictionalized re-enactment of events occurring after the release of 'The Blair Witch Project.'"

The next image we see is that of Kurt Loder, the MTV News anchor, discussing the then-burgeoning "Blair Witch" phenomenon. He's followed by Jay Leno, Conan O'Brien and Roger Ebert, and immediately we know where we are: the much-traveled realm of self-referential media satire. None of this is one-fifth as original as Berlinger and co-writer Dick Beebe seem to think it is, but much of it is amusing and crisply handled. The 1999 release of "The Blair Witch Project" has transformed the rural hamlet of Burkittsville, Md., where the movie was filmed. Residents have learned to dress nicely when fetching the mail, as they're likely to be recorded on video by passing motorists. One resident has begun selling both Blair Witch-style wooden stick figures and "genuine" Black Hills rocks (from her backyard). Unhappily, her mail-order business hasn't worked out; it's too expensive to ship rocks by UPS.

Among the Burkittsville entrepreneurs we meet is a blithe stoner dude named Jeff (Jeffrey Donovan), who insists that the legend of the Blair Witch is legitimate despite all the "naysayers who come and say nay." As "Book of Shadows" settles down, we learn that Jeff has spent time in a psychiatric hospital and that his new venture is leading tourists into the Black Hills in a van emblazoned with "Blair Witch Hunt" logos. Jeff's first group is a gaggle of cynical hipsters who don't think there's anything out there to be afraid of, and whose basic goal is to party hearty. In other words, they're a classic batch of horror-movie victims, urbane know-it-alls wandering into the nightmarish terrain of Jason and Freddy and Michael Myers and all the other rural mutants bearing elaborate instruments of torture.

Daniel Myrick and Eduardo Sanchez's original "Blair Witch Project" became famous partly for its lack of grisly effects, but Berlinger has quite deliberately chosen a different path. Every so often he interjects unexplained snippets of gruesome violence, shot in grainy color video, and then flashes forward to scenes of police interrogation. Something has apparently happened, or will happen, that ends up with Jeff and two members of his tour group -- scholarly, skeptical Stephen (Stephen Barker Turner) and Goth party gal Kim (Kim Director) -- in custody. Wiccan priestess Erica (Erica Leerhsen) and Stephen's mousy girlfriend Tristen (Tristen Skyler) are both missing. (Yes, the principal actors all play characters with the same names, although that strikes me as a pointless echo of the first film.) And what has happened to the five members of the rival "Blair Witch Walk" tour group, who camped on Coffin Rock, site of a notorious 19th century massacre?

To learn the answers to these questions and more, you'll have to travel the path of weed, Jack Daniels and Pete's Wicked Ale with our boisterous fivesome. They sit around debating the merits and meaning of the Blair Witch phenomenon: Is it myth or metaphor, or simply a seductive fiction with no significance? Jeff, while trying to get in Erica's pants, tells her: "Video never lies. Film does." (Warning: Profound irony!) Even after the situation turns undeniably creepy, the characters continue "Scream"-esque debates about their situation. As Stephen sarcastically tells Jeff, group hysteria "is real, dude."

As the substances kick in, our gang gets a little wild around the campfire and wakes up hung over, with their campsite trashed and the video equipment missing. But Kim, who professes psychic abilities, knows where their videotapes are buried -- at the same spot where the original "Blair Witch Project" footage was supposedly found! They go get the tapes and head back to Jeff's squat, an abandoned factory full of surveillance gear, to regroup and figure out what went wrong. That's when the so-called weird stuff starts to happen: children's voices, phantom dogs, amateurish tattoos, spectral naked hotties on the buried videotape. When you play the tapes backward, they reveal a message from Judas Priest, telling impressionable young people to kill themselves! No, not really, but close. Bug-eyed, Jeff exclaims: "This makes no sense!"

Berlinger's script and direction are full of ideas (probably too many) and his sexy, lively young cast makes "Book of Shadows" move along at an agreeable clip. But his plot is ludicrous even by the standards of horror films, its revelations are clumsy and there's never much of a mystery about what's actually going on. It's no surprise, given Berlinger's background, that the evil in his movie is decidedly not supernatural in origin. He's quite right to suggest that nothing is scarier than a group of hormone-crazed, liquored-up 20-somethings with nothing to believe in. But his lengthy essay about the film, handed out with the press kit, is probably more interesting than "Book of Shadows" itself, which can't decide whether to be entertainment or, as he puts it, "a meditation on violence in the media." (Just what people at the megaplexes want to see, Joe.)

As the sequel to a legendary indie hit, "Book of Shadows" is a muddled if appealing failure. Its real significance may lie in its relationship to the rest of Berlinger's work. Like his best-known documentary, "Paradise Lost," this is a movie about a group of young people who may have done something unspeakable, although they deny it. In the earlier film, he and co-director Bruce Sinofsky clearly take the side of three Arkansas outcasts (their alleged ringleader, a Goth and self-professed witch) who were convicted of a heinous triple murder on sketchy evidence. "Paradise Lost" is a masterful depiction of middle American darkness, and it's a far more frightening and powerful film than "Book of Shadows" (or "The Blair Witch Project," for that matter). But Berlinger's new film strikes me as a half-conscious admission that he might be wrong about the Arkansas case, or at least that the origins of violence, and the nature of guilt, are never easy to explain.