The death of outrage

The GOP's moral watchdogs are strangely silent, now that the lying, evasive party boy turns out to be THEIR standard-bearer. 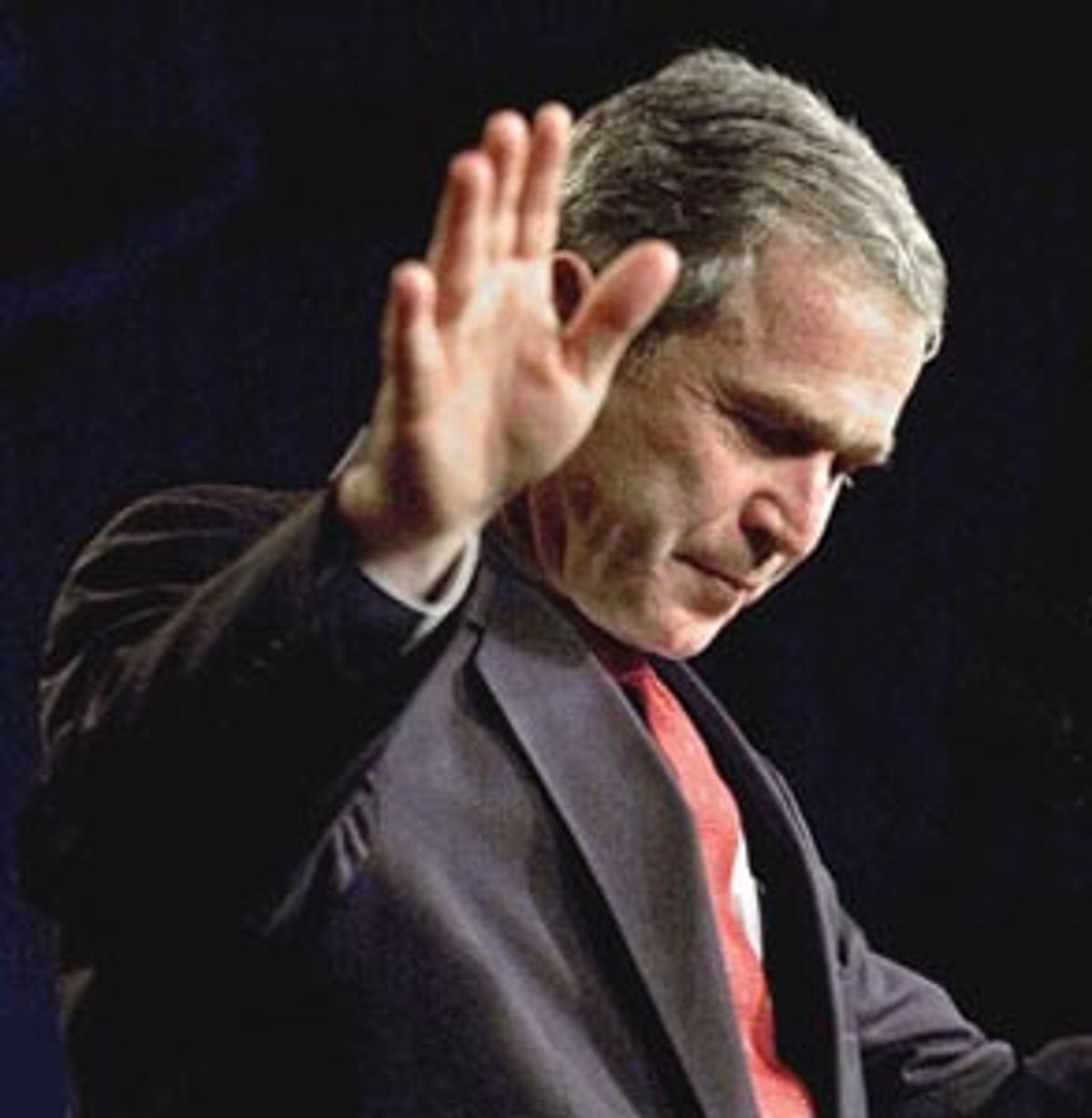 The last 24 hours have proved once again that moralizing right-wingers can dish it out, but they can't take it.

For the past eight years, an endless procession of conservative moralists -- politicians, journalists, commentators and general blowhards -- have denounced President Clinton as the most disgraceful, lying, conniving, lascivious, hippified, stoned, intern-groping, morally relativist president ever to disgrace the Oval Office. Many of them were seething with righteous indignation the moment the skirt-chasing, draft-dodging, non-inhaling good ol' boy took the oath, but when the Monica Lewinsky affair broke their wrath assumed towering, Jonathan Edwards-like proportions.

The impeachment leaders in the House and Senate led the way, intoning pious denunciations of the president as a truth-evading, slippery, slimy scoundrel. The most vociferous was Rep. Bob Barr, R-Ga., who did a superb imitation of a Southern Baptist minister preaching with a nasty hangover, spewing out a stream of invective against the cancerous, satanic lizard coiled up in the West Wing. Fellow Republicans Alan Simpson, Trent Lott and Tom DeLay thundered on and on about the president's disgraceful behavior. Rep. Henry Hyde invoked the great battles of the past as he implored his fellow congressmen to do the right thing and impeach the lawbreaker.

The juiciest invective, however, came from outside the corridors of power. Moralist without portfolio William Bennett, almost apoplectic with rage that a sheep-like nation was letting the Great Satyr off the hook, sent forth a vein-bulging screed titled "The Death of Outrage." Rush Limbaugh flogged his Dittoheads daily with rapid-fire denunciations of the equivocating hound from Arkansas. And, of course, much of the rest of the press -- especially the pack-followers in the Beltway -- hastily doffed their reporters' fedoras to don the black wigs of cut-rate moral judgment.

If it was their boy, I suspected, the "outrage" would magically disappear. The thunderbolts of opprobrium would suddenly become a nudge-nudge, boys-will-be-boys wink and nod. The miscreant's evasive, slimily legalistic behavior would -- kazaam! -- be transformed into a high-minded concern for the feelings of one's family. And the revelation itself would -- press avail! -- be attacked as a political dirty trick.

I never thought I'd see it happen so soon, before the current POTUS had even vacated the White House. But it just did. And guess what? The whole moral outrage thing was a complete sham.

Here's what we know. We know that Clinton is an equivocating, evasive, cunning, legalistic good ol' boy who tried to cover up his misdeeds -- in other words, a typical human being.

Now we know (if we didn't already) that George W. Bush is also an equivocating, evasive, cunning, legalistic good ol' boy who tried to cover up his misdeeds -- another typical human being.

But the people who were braying for Clinton's head then are silent now. It's a world-class demonstration of hypocrisy.

Of course, being arrested for drunken driving 24 years ago isn't a mortal sin. It shouldn't disqualify you to be president. It's a human failing, like Bush's rumored youthful drug use (or Gore's admitted drug use), or like Clinton's inability to keep his hands off Monica Lewinsky. Still, one would have a little more compassion for Bush if he demonstrated that he had learned something from his youthful indiscretions -- if, for instance, he showed some compassion for the thousands of people locked up for minor substance-abuse violations in Texas jails. (Violations it's hard to believe he himself didn't engage in.) But all that he seems to have learned is that if you get away with it, it's OK.

Nor is Bush's failure to reveal the arrest a mortal sin, although that failure raises serious questions about his judgment. Not revealing that one was arrested for a serious crime, when one is running for president, is both foolish and arrogant -- qualities that in Bush's case seem linked to his silver-spoon background. He's always gotten away with everything -- hell, he became the GOP's candidate for president with fewer qualifications than any candidate in modern history -- so why shouldn't he get away with hiding a li'l ol' arrest?

Worse, but still not a disqualifiable offense, is Bush's tortured family-values justification for not revealing his crime. Claiming he wanted to be a role model to his daughters, Bush said that he made "the decision that as a dad I didn't want my daughters doing the kinds of things that I did." Just how telling your daughters that you were arrested, booked and humiliated will entice them down a six-for-the-road lifestyle is not clear. Nor is it obvious why allowing the press to inform your daughters of your reckless past is a preferable parenting technique. But it doesn't matter: The "I was protecting my girls" story has all the plausibility of those pious declarations star athletes are always making that they had to turn down their longtime team's offer of $36 million and sign with another for $45 million "because of my family." How much more refreshing it would be if he simply said that he concealed the drunken-driving arrest because when running for president, it doesn't look good to have a rap sheet.

Finally, there's Bush's apparent lie about the incident, when Wayne Slater of the Dallas Morning News asked him point-blank in 1998 about his arrest record -- a lie, or misstatement, that he may have been about to correct when his ever-vigilant spokeswoman Karen Hughes pulled him away from the reporter. It remains to be seen what other steps, if any, Bush took to conceal the arrest.

None of these missteps are necessarily morally beyond the pale, but when combined with the innumerable other examples of Bush Jr.'s fecklessness, they paint a picture not just of a hopeless lightweight but a responsibility-shirking one. (To me, the worst thing about the whole episode was that it took this campaign-threatening bombshell to get Bush to hold a real, live press conference where he would have to face real, live questioners -- his first press conference, incredibly, in a month.) Moreover, regardless of how serious you think his sins are, they are ones guaranteed to send right-wing moralists into life-threatening convulsions: drugs (can anyone seriously now interpret his non-denials as anything other than tacit admissions?), avoiding Vietnam, being cagey with the truth.

Yet those moralists have suddenly become unaccountably mellow, as if they had (no doubt inadvertently) smoked a beakerful of the herbal equivalent of the true, the blushful Hippocrene. Whoa, dude, whatever, they mumble, barely raising their heads from the paisley pillow upon which they recline while listening to Blue Cheer. Drunk driving? Hey, man, we all blow it. Reefer? Cocaine? Chill, dude -- what are you, some kinda square?

This isn't metaphor. A weird watershed of some kind was crossed on Thursday night's "Hardball" when Alan Simpson, the fire-breathing former Wyoming senator, defended Bush by saying that look, every family has been through this, we all have kids who have been busted for drunken driving, everybody knows a kid who got popped for pot or cocaine. And if there was a way that Republicans could push reformed drug laws that would help only their rich, white children beat the rap, I know they'd be big enough to put them through!

Then there was William Bennett. The apostle of windy rectitude was completely untroubled by Bush's arrest, telling host Christopher Matthews that it would only be an issue if he lied about it. (I don't know what Bennett is saying now that it appears that Bush did lie, but I don't think he'll be rushing to his computer to start writing "The Death of Outrage II." There are Republican lies and Democratic lies, and in the exalted nostrils of St. William, only the latter stink.) Somehow, it's hard to imagine Trent Lott or Rush Limbaugh or any of the harrumphers of the right taking this live-and-let-live line if it was Clinton or Al Gore who had been arrested for drunken driving. Then, the very fate of the republic would be at stake.

The rest of the moralizers fell into party lockstep. Limbaugh began attacking Gore and his supposed tricksters, working himself up into such a frenzy that by the time he was done you were pretty sure that it was Al himself who had poured a beer bong down poor George's craw that sodden day 24 years ago. Sen. Arlen Specter, R-Pa., took the same line. For gentlemen who had revealed themselves to be such tireless seekers after the truth in Monicagate, they seemed oddly unconcerned with the fact that the story, whatever its origins, was true.

One can forgive political operatives anything: They don't pretend to be engaged in anything other than getting their candidate elected, by any means necessary. But those who mount the bully pulpit and claim to be speaking in the name of morality must be held to a higher standard. And by failing to hold the Republican candidate to the same principles they held Clinton to, they have abdicated all right to be regarded as arbiters of public behavior. In fact, they have been revealed as nothing more than party hacks, practicing the most vulgar kind of instrumental, ends-justify-the-means morality, prepared to use the Bible or any other tool to defeat their opponent. It is impossible to take them seriously. And the next time they come forward raising a holy ruckus over some Democrat's misdeed, they should be laughed off the national stage.

You do have to feel some sympathy for the moralistic wing of the GOP, though. It's been hard from the beginning of the Bush campaign to look at them, then look at their candidate, and keep a straight face. Now it's impossible not to burst out giggling.

Here's their champion, the man they anointed to uphold their cherished virtues: An intellectually lazy frat boy who avoided the Vietnam War by pulling a dubious National Guard stint, a self-confessed partier and problem drinker who didn't reveal an arrest for drunken driving and who has conspicuously ducked all questions about what other substances he might have used in his past, the heir to a political dynasty who was handed a series of cushy rich-kid jobs.

Yessiree, that's certainly moral exemplar material! This is the guy they're trying to sell to us as a paragon of virtue, the Western hero who will bring honor and decency and courage and mom and apple pie and all that star-spangled Ronald Reagan stuff back to the White House, once they fumigate it.

If American voters wind up putting this amiable dunce in the White House, I'm actually hoping he falls off the wagon and returns to his party-boy ways, because then at least we might have some decadent, Merry Monarch-like Restoration Comedy fun -- leering courtiers, foppish wits, extreme décolleté and so on. But please, my dear braying moralists, don't pretend this low-rent Charles II imposter represents some kind of Great Awakening. As Al Pacino said in "The Godfather," "It insults my intelligence -- and makes me very angry."