Our inn had a guest book that should have been rated X. 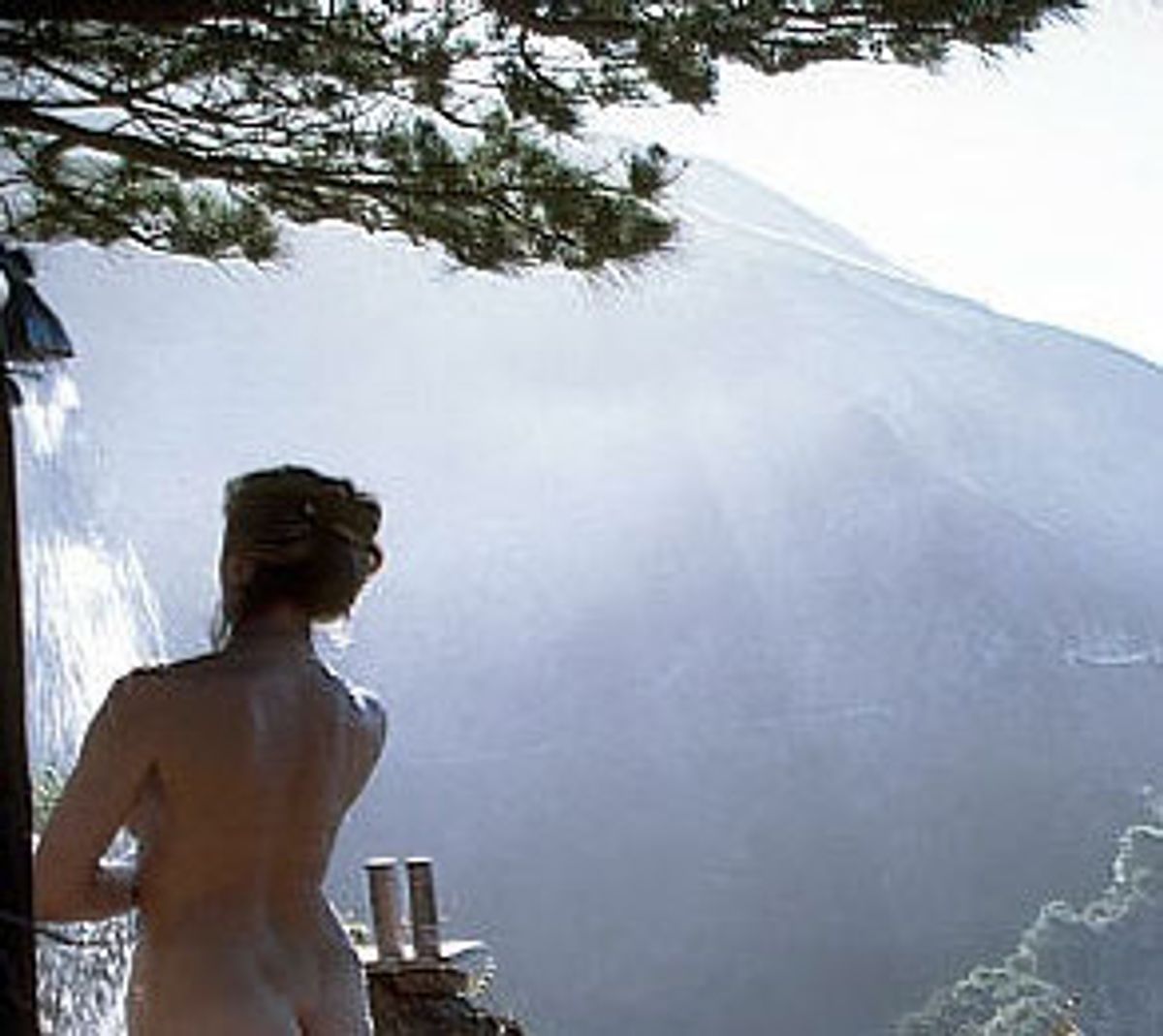 I spotted them almost as soon as we walked in. Four small clothbound volumes, stacked on the bedside table. Guest books, I thought. Except they didn't announce themselves as guest books. They had coated paper and velvety exoskeletons, and instead of being centered on the table, they were shoved against the wall, like a pile of old paperbacks you're embarrassed to admit you've read.

But there was no concealing them in the rustic, foursquare, Norwegian-style redwood cabins that make up Deetjen's Big Sur Inn. It's the kind of place that makes a fetish of its openness. Everything subsists in an eternal murmur of water: the river out back, the Pacific coast down the hill. And if you close your eyes and ignore the vaguely human sounds from the adjoining cabin, you can make believe you're the only ones there, the only ones who were ever there.

But it's harder to do so with those guest books staring you in the face. Here suddenly was tangible evidence of past presences, of couples just like Don and me, coming here for similar purposes, to launch or celebrate or save relationships -- the same thing that happens every minute at every resort in every corner of the world. And so when I opened one of those clothbound volumes, I expected nothing more than the usual guest-book banalities, those guarded, impermeable expressions of cheer that I've come to dread: "Had a lovely time ... Couldn't have asked for nicer weather ... Can't wait to come back again!"

But the first line that caught my eye was "My lover's cock is still hard inside me."

And instantly arose the image of a woman (why a woman, necessarily?) straddling a panting male body and, in that first post-coital moment, stretching toward the bedside table, snatching up the clothbound volume, groping for a pen, recording -- on the spot -- an instantaneous stenography of sex.

I began flipping the pages.

"Last night I tied Jenny to the bed ... She was stretched out naked. Fingers and toes touching the corners of the bed ... She was a little nervous but I could tell she was excited. I started very slowly, gently massaging her from the soles of her feet to the tips of her fingers ... Jenny smiled up at me and licked first just the top, then the underside, then sucked the whole length into her mouth ... She sucked and licked me hard, until after a couple of minutes I couldn't hold back anymore. With my hair pushed against her nose, I came in her mouth."

Before long, Don was sitting next to me on the bed, and we were both reading. We read about Sean and Kelly: "Our carnal desires come to the surface, clean and unabated by the trivial business of caring for our home ..."

No, these were not the usual guest-book entries. These were graphic obeisances to sex. Sex was the continuous, encompassing force. It was the sickness and the cure, the all-extinguishing act.

"The smell of the fire and fresh sex mixes and fills the room. We lie naked -- spent and silent ..."

Don and I read and read. And after a while all that sex seemed to spill off the pages and into the room, and pretty soon there was no containing it. The cabin could no longer confine it. One couple sprinted down to the beach to make love in a driftwood castle. Another ran into the woods to perform the rare "Mexican cartwheel," leaving in their wake new generations of couples seeking new habitats to achieve the same geographical proximity.

Four Germans. It sounded plausible and mystical at the same time. And somehow in the act of contemplating these German hikers -- wondering whether they blushed or took pictures, whether they talked about it over dinner or never brought it up again -- I began to believe that everyone here was, like the Germans, an accomplice to sex, a witness or an actual participant in acts he or she had never before imagined.

Sitting at dinner that night in the Deetjen's restaurant, I found myself staring at the other diners. Two young women seated against the roadside window. An older woman in a poncho, chatting ebulliently with her daughter and son-in-law. A grizzled, salt-cured man wrapping his large hands around a wine bottle. I studied all of them, trying to decipher their covert language: the casual crossing of feet, the lingering of a hand on a menu. What were they going to do when they stumbled back to their moonlit cabins? What fantasies were they even now -- in the dark chambers of their minds -- preparing to enact?

My head resounded with new knowledge: A wet vagina never lies ... Pour benedictine on lover's privates, aka wet pussy, and lick her to heaven ... Spend more time munching on your sweetie's coochie.

And as soon as dinner was over, I was back in the cabin with the guest books spread across my lap.

"The lovers were naked and busy for hours. Then off to a great spa for a perfect hydrotherapy ..."

The more I read, the more I realized we were all part of the same text, all working feverishly to hold up our end. The sexual pressure was terrific. Even Sarah, the champion fellator, admitted that reading these entries had made her "a little competitive." And Jason of Toronto said, "It's like going to bed with a thousand ghosts."

Maybe that spectral presence explains why people hadn't always succeeded here. Some confessed to making up segments of their story. A hapless guy named Steven admitted that he and his honey had "eagerly prepared for this moment with essential oils and body lotions" before passing out "like cats in a sunbeam."

He attributed their failure to the food, the wind and the babbling brook outside. I have a different theory. Another ghost lurks in these environs, and he is a well-known card. Travel up the highway a quarter-mile and you can even see his shrine, tucked away in a grove of redwoods: the Henry Miller Library.

Yes, the great balding, thick-lipped, bespectacled sensualist trod these very same grounds, and to judge from the diaries at the inn, his spirit still walks abroad. We might have known. He told us as much: "All those yearning looks I bestowed on the buildings and statues, I had looked at them so hungrily, so desperately that by now my thoughts must have become a part of the very buildings and statues, they must be saturated with my anguish."

Yes, Miller's anguish and yearning have trickled down the streams of Big Sur; they have filtered up through the roots of redwood trees; they have washed out in great diasporas on the crests of the Pacific Ocean.

Miller is watching over us. He is steering our hands and pelvises, doing all the things he couldn't do while he was still alive. He is performing Mexican handstands, scandalizing German tourists. He is straddling Lance and Nora; he is caressing Diana and Brian. He is goosing Rob, the mild-mannered husband who laces himself up in a corset, cinches his waist "to the size of a lipstick tube," pulls on a pair of full-length black gloves and belts out musical numbers.

And don't think it ends there. Miller's anima longs even for the inanimate. So it was that, on the morning of our departure, I awoke to find the entire landscape eroticized. Enormous yucca plants, thrusting their hard green bodies to the sun. Vagina-red camellia bushes, the size of small trees. Incense-bearing wisteria, jamming their long, probing fingers through the apertures of a trellis. And wafting through it all, the cool, damp ejaculate of fog.

Henry Miller's ghost is writing us, if we will only let him.

To be sure, some people have resisted. The guest books contain long stretches of bad New Age poetry and innocuous instructions like "Everyone go out and buy an English bulldog, they will truly touch your spirituality."

Even as you read these messages, though, the Dionysian urge burbles up inside you and you think: English bulldog. Yes, an English bulldog might do quite nicely. And suddenly everything seems possible -- if not to you, then to someone else.

And there we let it rest. What happened that night is strictly between us and the ghosts. But like all the other guests at Deetjen's, we left behind some simulacrum of ourselves. Look for us when you arrive -- we're the ones hovering genially in the eaves. Strain your ears for our whisper. Listen for our call.

Hello, young lovers. Whoever you are.