Chef reveals that the Dubyas are loco for bull balls; Laura Bush's good head transferred to better bod; and is the prez-elect's niece bird-doggin' Prince Willam? 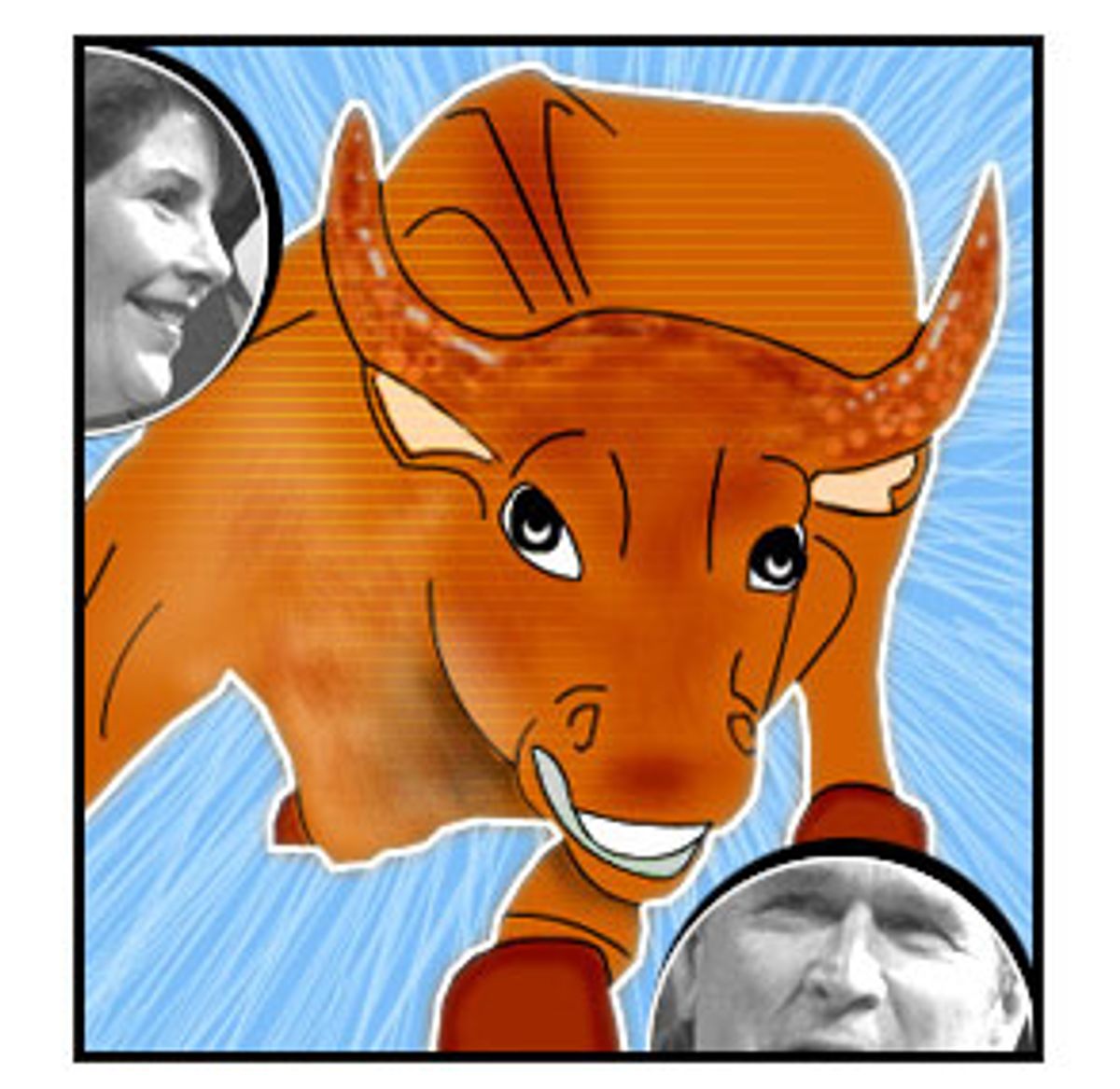 If we are what we eat, what does that make the Bush family?

In a piece in this week's New Yorker detailing the long-running swipe-fest between cartoonist Garry Trudeau and the incoming first family, George Bush père was quoted as saying, "That Doonesbury -- he speaks for a bunch of brie-tasting, chardonnay-sipping elitists!"

Coming from a pork rind-eating elitist with an aversion to cancer-fighting leafy greens, the problem is presumably with elitist foodstuffs more than it is with actual members of the ruling class. And incoming offspring George W. apparently shares Poppy's penchant for consuming all parts of the animal.

According to Grady Spears, Texas chef and author of "A Cowboy in the Kitchen," the president-elect is loco for bull nuts. The Texas specialty, known by the mercifully euphemistic name of "calf-fries," is nothing more and nothing less than a mess of deep-fried bull testes. Chef Spears, who served the dish often for Mr. and Mrs. Bush when the former was governor of Texas, told Wireless Newsflash, "The plates came back pretty empty."

Those poor Bush girls -- it's hard to imagine what's worse: Jenna and Barbara watching better-looking versions of themselves making out on Comedy Central's upcoming "Family First," being dressed by "New York" Texas designer Lela Rose (whose creations include a "sunburst pantsuit") or being denied dessert until they finish their testicles. (Luckily, trusty dog Spot will be relocating to the White House.)

If these are the sort of style and entertainment trends we can expect to be set during the Restoration, the next four years promise to be choads more fun than originally thought. Though taurine cojones will not be on the menu at the upcoming Tex-Mex Inaugural Ball, Spears says he hopes to serve the gonads at a future state dinner.

This should make the Bushes as legendary for their parties as they are for their fashion sense. But it's got to be hard being a down-home, aw-shucks Republican gazillionaire. No matter how much money you have, you can't spend it on anything decent. According to Liz Smith, James Baker (not that one), creative director of the Texas special events company Richard Flowers & Associates Inc., claims the bash will once and for all "prove that we can go to a gala in a tuxedo and boots without it being Podunk!''

Well, gollee! And how exactly will they do that?

Smith also reports that an invitation going around for a juvenile diabetes fundraiser imitates the cover of the fashion magazine W and features a picture of Laura Bush's head superimposed on a model's body. The invite calls Bush "a fashion trendsetter with liberal ideas for a conservative dresser."

But as USA Today eloquently put it, "Bush, like all soon-to-be first ladies, faces a typical conundrum: how to dress elegantly enough for the state dinner circuit without alienating the very folks who voted for her husband."

In fairy tales, Prince Charming comes galloping to the aid of the helpless, the destitute, the captive and the comatose. But in real life, he eschews buzz-killing distressed damsels in favor of the fabulously rich, famous and well-connected. Young Prince William's romantic inclinations have consistently favored girls with high profiles, prized pedigrees or fat assets, but in his latest epistolary dalliance he manages to combine the three.

After reportedly indulging in flirtations with such lens-hogging luminaries as Britney Spears and Ivanka Trump, the princeling has spent part of the last two years swapping e-mails with 16-year-old presidential niece and Elite model Lauren Bush. Not surprisingly, the elder Bushes are said to be delighted. That little Lauren, then 14, lured the boy with a steamy note and modeling photo of herself (which she insouciantly left behind on a yacht upon which the lad would be summarily embarking) was apparently of no concern to the family scions. In the Bush family, the prince always justifies the means.

In this era of mergers, monopolies and multimedia empires, it's only natural that the sons and daughters of privilege should take a global, diversified approach to both their romances and their vanity careers. More and more are marshalling their ancestral clout to pout pantless in public or win the affections of those who do. Young Wills is only following in the footsteps of his uncles, after all, and Bush is hardly the first heiress to wiggle her way onto the side of a bus.

"None of them would make it in Vogue as just a model," former Vogue editor and columnist Plum Sykes sniffed back in the days when Alexandra Reeves, daughter of Christopher; Ivanka Trump, daughter of Donald; Bijou Phillips, daughter of John; Kimberly Stewart, daughter of Rod; Jade Frampton, daughter of Peter; Elizabeth Jagger, daughter of Mick, and Lauren Bush were making their entry into the strutting and preening business. "These girls simply aren't beautiful enough, tall enough or extraordinary enough."

But while Sykes almost manages to sound outraged (What will become of all those too-tall girls from Topeka with otherwise limited career options?), the trend makes sense for adulation-seeking youngsters in the long run.

On the difference between the stupidity of celebrity-obsessed Americans and the snobbery of monarchy-obsessed Brits, actress Tracey Ullman has said, "Of course, in the U.K. you cannot grow up and marry Prince William, but in the U.S. you can grow up to be president."

This, of course, is only true assuming there are still more Americans who can afford to run for president than there are suitably titled, marriageable Brits -- a wobbly assumption at best. As new rock stars and movie actors are titled daily, the pool of acceptable royal brides has got to be getting deeper. Just last year, Mick Jagger (whose own 14-year-old daughter recently embarked on a modeling career despite her father's desire for her to pursue one in accounting) was to have become "Sir Mick." The honor was rescinded at the eleventh hour when it was revealed that he had fathered a child with a Brazilian model. (Sir Paul McCartney and Sir Elton John do not have model daughters of their own, though McCartney's daughter, Stella, does work closely with them and could probably arrange introductions.)

Anyway, given the panty-pelting that the Princelet of Wales has been enjoying in the past few years, it's doubtful that many of us will live long enough to see him walk down the aisle. But if he did choose to do so with, say, the filthy rich model niece of the most powerful man in the world, who -- especially after the Diana fiasco -- would really try to stop him? After all, the enquiring minds of Great Britain are not paying to watch the only cute member of the family cut ribbons with some obscure Teutonic princess. Aside from being heir to the throne, the boy is a star.

And other child stars should be so lucky. Entertainment journalist Joal Ryan's new book, "Former Child Stars: The Story of America's Least Wanted," warns us yet again that childhood and repeated media exposure don't mix when mommy and daddy are nobody in particular. The author, who also created the Web site formerchildstar.net, asks the age-old question of what happened to the Gary Colemans, the Danny Bonaduces, the Anissa Joneses of the world. What happened, according to Ryan, was "life, Hollywood, the world. Drugs, suicides, assorted scandals. Too much money, celeb tell-all memoirs, talk shows."

Of course, this kind of stuff happens to Princess Stephanie of Monaco all the time. She was recently "disinherited" -- she will only receive 1 percent of her father's $25 billion estate -- after being linked to a gangland murder. However, thanks to her diplomatic immunity and influential friends, we will most likely be spared the ordeal of seeing her go to trial for holding up a liquor store.