With her cloying new inspirational book, Anna Quindlen joins Martha and Oprah as the latest example of a secular savior. 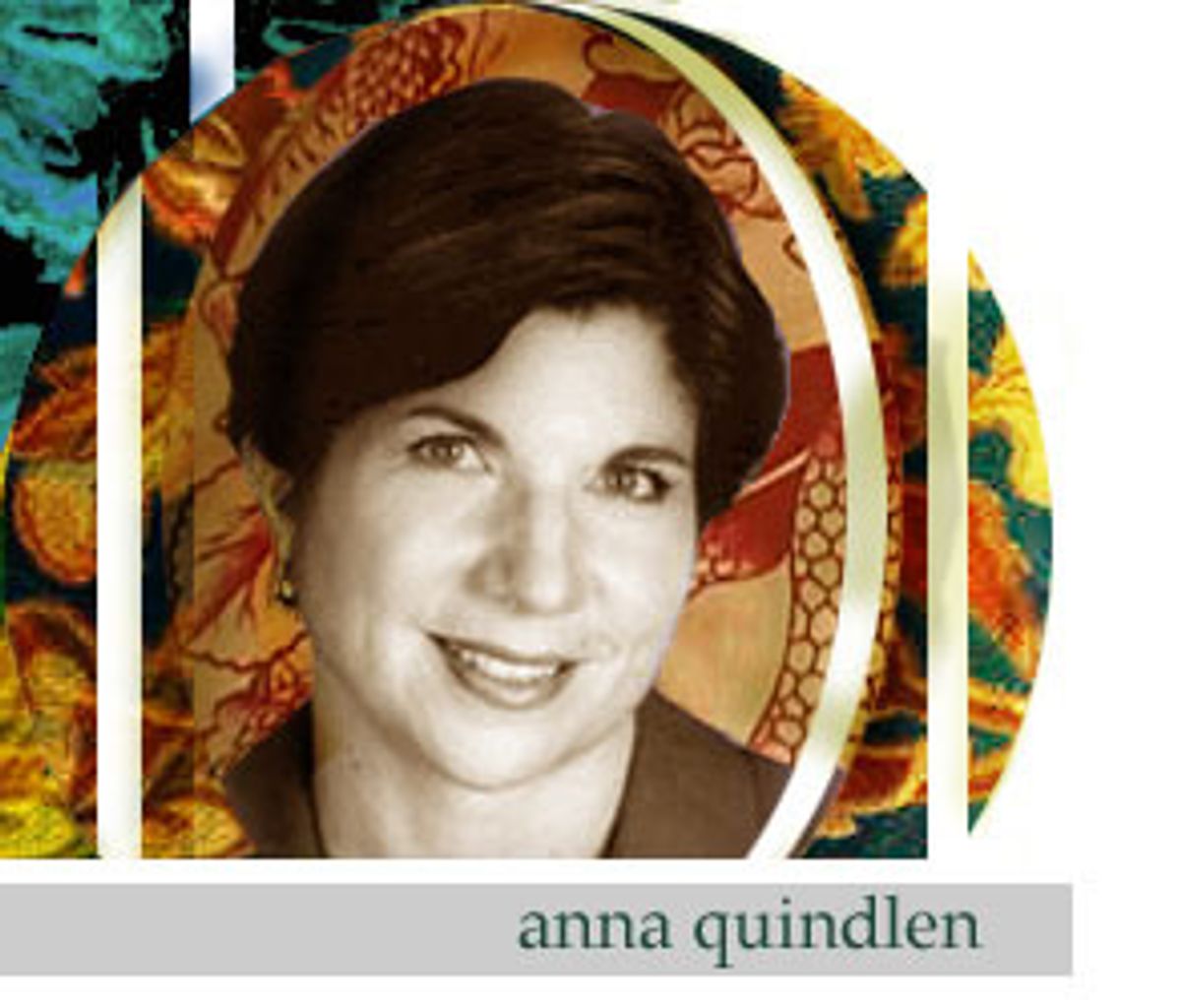 For a saint, Anna Quindlen is exceptionally modest. In the first line of her new book, "A Short Guide to a Happy Life," she confesses that she's "not particularly qualified by profession or education to give advice and counsel." She then adumbrates her unfitnesses: "I've never earned a doctorate, or even a master's degree. I'm not an ethicist, or a philosopher, or an expert in any particular field. I can't talk about the economy, or the universe, or academe, as academicians like to call where they work when they're feeling grand."

"I'm a novelist. My work is human nature. Real life is really all I know."

Well, look who's feeling grand now! Quindlen's work is human nature, thank you very much. Every morning, you will find her marching into the foul rag-and-bone shop of the heart -- that place where academicians fear to tread -- armed with nothing but a laptop and a cup of chamomile tea. Don't bother thanking her. She will simply shake her head and say, "Real life is really all I know!"

Is there a less humble, more transparent way of saying "I know everything"? Probably not. But this begs the question of what precisely Quindlen does know. Having just read her book -- it took me several minutes -- I can safely report that her wisdom consists of "You are the only person alive who has sole custody of your life" and "This is not a dress rehearsal" and "Today is the only guarantee you get" and "Life is glorious" and "You have no business taking it for granted." Oh, and "Life is short. Remember that, too."

In a truly just world, such threadbare banality, stretched to mini-book length by the strategic insertion of photographic tableaux, would be given the reception it deserves. That is to say, it would be left to molder on the remainder table while anyone in dire need of a carpe diem infusion would be instructed to rent "Harold and Maude" or "Auntie Mame" or check out the local-theater production of "Our Town."

But things have come to a different pass, and Quindlen's e-mail enclosure currently sits at No. 3 on the New York Times Advice, How-to and Miscellaneous bestseller list (right behind the "Guinness Book of World Records" and "Who Moved My Cheese?"). And so, in the face of this weighty cultural endorsement, we must stop, regroup and begin looking at Quindlen in a new light -- as the latest encrustation of a strange and relatively new phenomenon that I will call secularized idolatry.

The plain fact is that people who swallow Quindlen's rice cake of a book are consuming not so much the message -- which is indistinguishable from the mottoes on a box of herbal tea -- but the messenger. They're immersing themselves in Anna-Quindlen-ness. And if they can't be a Pulitzer Prize-winning New York Times columnist and the author of well-compensated novels, they can at least merge with the persona behind those works: the radiant earth mother, the levelheaded avatar of liberal family values whose occasionally self-deprecating anecdotes serve only to demonstrate how effortlessly grounded she is. It is this idealized vision of modern woman -- this airbrushed Hillary Rodham Clinton -- that is Quindlen's truest and most lasting work, and it confirms her as the most recent novitiate in the growing order of secular saints.

At one level, we can see Quindlen and her ilk as simply carrying on work that began a long time ago. Haven't women's magazines spent some 150 years providing prescriptions for better living? Haven't gurus from John Gray to Marianne Williamson to Tony Robbins made a fortune cramming our minds and malls and airwaves with moral-fitness regimens? Haven't generations of evangelists tried to rouse us from the slumber of habit and exigency?

But today's secularized saint represents a departure. For one thing, she invokes no deity, other than Maya Angelou. She undertakes no field research and offers no particular expertise; indeed, she scorns the whole notion of expertise. (Academicians, be gone!) What she offers is simply herself, in all her twinkling mediagenic splendor: a savior masquerading as a seeker.

Perhaps, as with so many noisome trends, we can lay the blame on Martha Stewart. Who, after all, has done more to encourage her own worship? Leave aside for a moment the stupendous vanity productions of her television empire. Simply leaf through any one of her books or magazines. You can't jump very far without landing on the waxy, graven image of the Blessed Martha -- as hallowed and ubiquitous as Virgin Mary icons in a Russian Orthodox cathedral. One could argue, of course, that this iconography has been applied not to a moral but to an aesthetic end: the greening of our homes. But listen again to Stewart's famous catchphrase, the one that concludes so many of her televised sermons:

Not a pretty thing. Not a nice thing. A good thing. Conspicuous consumption ingeniously married -- in four short words -- to Puritan values. And when strained through the pop promiscuity of Stewart simulacra, the message that emerges is not "Do what I do" (which is, of course, the message of any advice columnist or armchair shrink) but "Be what I am." Be me.

If Stewart helped inaugurate pop idolatry, no one has raised it to higher, more sacramental levels than that Mother Seton of secular saints, Oprah Winfrey. I say this with some sorrow because, for a long time, I got a real kick out of Oprah -- until that fateful moment several years back when she decided to transform her television show into a vehicle for positive and life-affirming messages. Amid all the approving publicity that ensued, no one seemed to question the assumption behind this metamorphosis: that Oprah, and Oprah alone, was the person best suited to lead us from our caves into the blinding light of revelation.

This self-ordained ministry now rests as snugly as a surplice on her waxing and waning body. She is, as they say, a multitude, and when I try to call up memories of a past show, I keep circling back to her. If, for instance, I try to remember the woman who lost two children to a rare illness and then learned her youngest child had the same disease, I can't do it. All I can remember is Oprah laying her hand on the crying woman's shoulder and standing there like a special-delivery angel, unmoving and serene, a pure conduit for God's antibiotic energy. Heavenly Father, heal this wounded sinner!

The hagiography becomes even more pronounced in Winfrey's gaseous new magazine, O, which manages the not-inconsiderable feat of making everyone it profiles or publishes -- Bette Midler, Amy Tan, Joyce Carol Oates, Vaclav Havel -- sound exactly like Oprah Winfrey. And just in case the message gets too diluted in translation, we get it from the horse's mouth herself when Winfrey weighs in with her monthly exhortations: "This year, resolve to pay close attention to your life. Be open to what it is trying to tell you. Your life speaks to you in every moment, every encounter, every feeling. By listening and making responsible choices, you can reinvent your life each day."

Like any good secular saint, Winfrey takes the sting off her own perfection by telling us what a fallible person she was before being permanently ennobled by trauma. In this context, disastrous events -- an unhappy childhood, abusive men -- become merely the alchemic media by which mortal dross is reconfigured into philosopher-queen. In Quindlen's case, the transformative trauma was losing her mother while still in college. "Something really bad happened to me," she writes, "something that changed my life in ways that, if I had a choice, it would never have been changed at all. And what I learned from it is what, today, sometimes seems to be the hardest lesson of all. I learned to love the journey, not the destination."

Oh, yes, the journey. (Winfrey loves to talk about that, too. In the January issue of O, she approvingly quotes author Gary Zukav: "Your life is a journey to learn about yourself.") Now, if I understand the concept correctly, we are all making roughly the same journey; the secular saints are just the lucky ones who get to vault ahead. Not to worry, though: Their spiritual superpowers give them a deep sense of obligation toward the rest of us. "I learned to look at all the good in the world," Quindlen writes, "and try to give some of it back, because I believed in it completely and utterly. And I tried to do that, in part, by telling others what I had learned, even though so many people may have thought I sounded like Pollyanna."

Let's not dwell too much on Quindlen's syntax -- the redundancy of "completely and utterly" -- or the irony of fulfilling a higher calling by penning aggressively promoted mass-market volumes. (We'll give her the benefit of the doubt and assume the royalties are earmarked for charity.) Let's just look for a moment at the message that Quindlen feels so duty bound to bring us. It is best summarized, I think, in the following direct quote: "C'mon, let's be honest. We have an embarrassment of riches. Life is good."

I have no doubt that life is good for Quindlen. I do wonder, though, if she has ever tried to convey that message to, say, a manic-depressive (I have; it doesn't get you very far) or to someone whose life isn't quite so Anna Quindlen-esque, someone who doesn't live in a nice part of New York, get book royalties or have time to "sit in the backyard with the sun on your face," because, hell, she doesn't have a backyard.

For all their soul scouring, what the secular saints fail to realize is that their happiness -- the very luxuriance of their quest for happiness -- is inexorably tied to their privilege. Their "moral vision" is wreathed in silk. And I'm not just talking about Stewart, with her origami nesting boxes and stenciled eggs and pistachio valentines. Check out Winfrey on the cover of the latest O, wearing Ralph Lauren Sport pants and a Ferragamo sweater and cashmere gloves, and clutching the whitest, roundest, prettiest snowball you've ever seen. (Stewart must have helped.) Or listen to Quindlen, that purveyor of life's simple verities, enumerate her laundry list of pleasures: "the snowdrops, the daffodils ... fettuccine Alfredo; fudge; 'Gone with the Wind,' 'Pride and Prejudice.'" These women aren't selling a way of life, they're selling a lifestyle -- to which non-Jane Austen readers need not apply.

No matter what form (or gender) the secular saints take, they are, in the truest sense, false idols because they want us to do something that is both offensive and impossible. They want us to live their lives -- when in fact we can only live the lives we have, and we can only learn about life by living it. If I could be a secular saint for a day, my message would run as follows: "Stop up your ears, and close your pocketbook. Go home, and do the best you goddamn can. And for God's sake, don't tell anyone about it." I promise I won't charge a dime.