The new craze in craziness; to kill a black swan; and Pamela Anderson suggests new uses for your Palm. 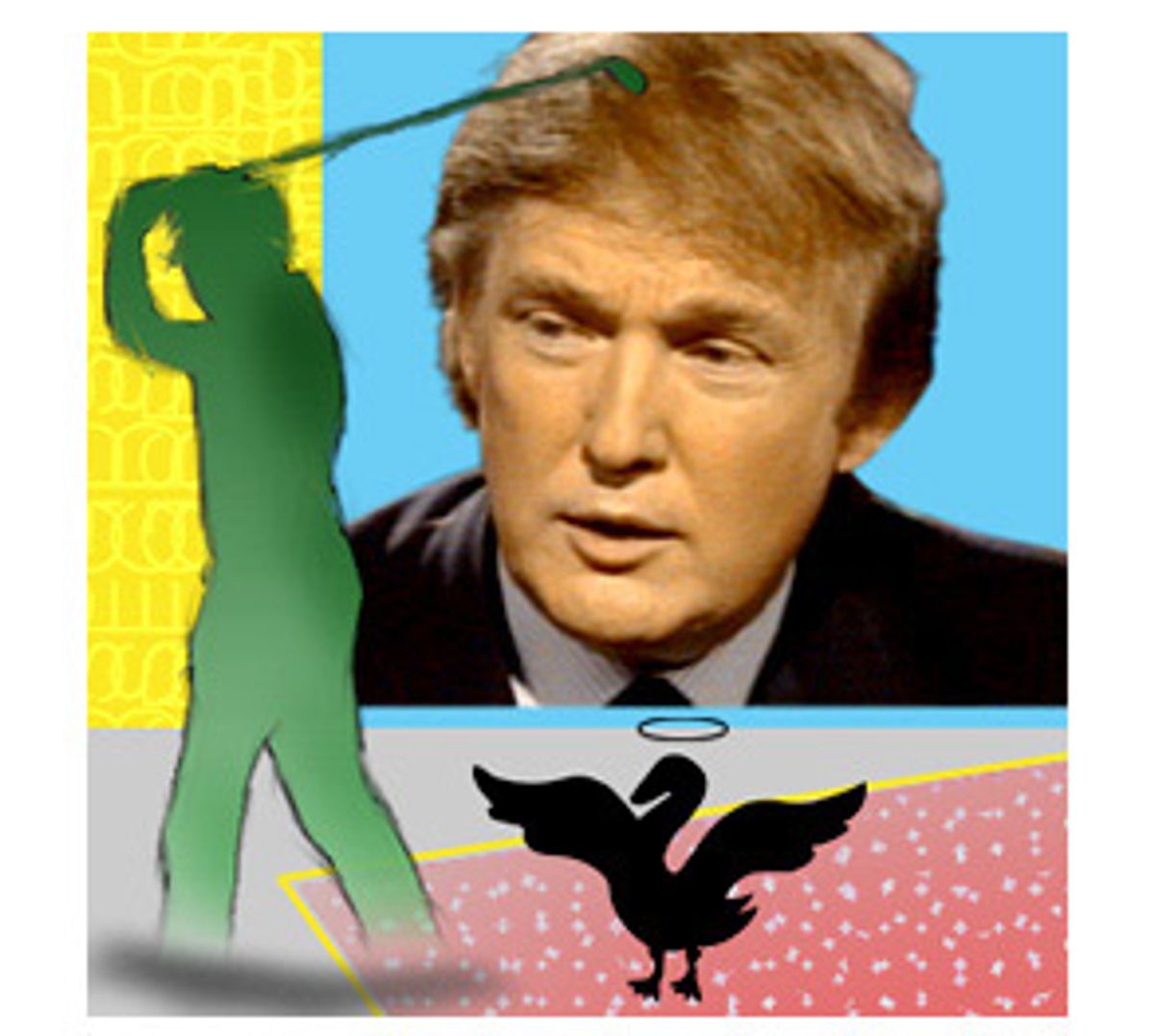 We've always known that success in the corporate world requires a streak of the presciently named "killer instinct," but not since Michael Douglas' grim-faced impersonation of an angry corporate white guy in the ripped-from-the-headlines execsploitation thriller "Falling Down" has the phrase taken on such a sinister yet vaguely ridiculous quality.

Last week, the New York Post reported that a guest of Donald Trump's superexclusive Palm Beach, Fla., golf course unleashed his righteous wrath on one of the mogul's rare black swans on the back nine. The swan, known only as Alex, indecorously met his maker shortly after wandering too close to the 17th hole, where the angry golfer was having a really bad day. Alex was subsequently clubbed to death with a driver, and the golfer (and alleged perpetrator) will never play golf on Trump's green acres again by order of The Donald himself.

Whether this rare bout of links rage augurs more blood on the fairways, squash-racquet drubbings or polo-mallet murders is not yet known. For now, the new rage in white-collar wilding, according to psychotherapist and "rage expert" Deborah Cooper, is "desk rage" (read: murderous workplace rampages). Death by insane, gun-toting co-worker is now the second most common form of workplace expiration, and Cooper predicts that instances of this trendy new scourge will only increase from now until Valentine's Day, a period of time apparently chock-full of "trigger events" such as the presidential inauguration and the Super Bowl.

While we understand that both dates provide the perfect backdrop for despair, we're not clear on the office connection. When asked why co-workers attack, Cooper offered the following rather detailed scenario:

"Say a guy was dumped by his girlfriend before the holidays. He's angry about the holidays. Say she dumped him for another guy. He's angry at the guy. The Super Bowl is coming up. Maybe he invested some money in it. Maybe he's over-identified with the team, sees it as an extension of his masculinity. And Valentine's Day is coming up and his girlfriend just dumped him for another guy. Meanwhile, there's the inauguration, bringing back memories of all those weeks of upset that caused."

Hmm. But why desk rage as opposed to some other, equally horrifying location-based type rage (bathroom rage, for example)? It seems the average workplace -- that grayish locality where time stands still -- may provide the perfect meditative yet irritating setting in which to hatch and execute any number of evil plots. "In the office," says Cooper, "you just sit there and stew."

Well, we certainly can't argue with that. In fact, our long hours of cubicle-bound inactivity provide us with many an opportunity to dwell on the fact that there are people in this world -- many people, in fact -- whose occupations are simultaneously less taxing and more rewarding than ours. Languorous hours of stewing furnish us with ample time to wonder why they are where they are, why we are where we are and where we went horribly wrong.

"You're the reason we have a job," enthused actress Jessica Alba at the 27th Annual People's Choice Awards, rubbing it in after her show "Dark Angel" won the coveted "Favorite New Dramatic Series." This galling remark was made no less disturbing by host Craig Kilborn's amusing introduction at the populist awards show where the academy, c'est toi: "You, the people, vote, and the winner is chosen by the Supreme Court."

If only it were true in this case. While we puzzle over whether we really did have a hand -- however indirect -- in securing gainful employment for the likes of Alba (who decided against high school because she "didn't do good with authority"), the precocious teen gets to traipse freely around town with a shiny new crystal statuette in hand. The rest of us -- who ostensibly "do" just as badly with authority, but slightly better with adverbial agreement -- may wonder whether, in the future, we'd be better off voting for our movie stars and voting for president with an applause-o-meter.

Then again, it is precisely this sort of populist ideation that has wrought Eruptor Entertainment's "PortaPam." This clever innovation in hand-held "PortaPet" technology allows us to try our hand at "managing" the "career" of a zaftig cartoon Pamela Anderson, whose tiny little hand-held life transpires on a variety of exotic locations such as a tiny digital beach, the gym, the set, her shower, her bedroom and a nightclub.

Finally, a use for the Palm!

For more on the people and trends that make our times so insufferable, read last week's Cheap Shots.