Jennifer Lopez stars in a chaste, lively, goofy romantic comedy. What more do you want? Well, there's a shot of that, too. 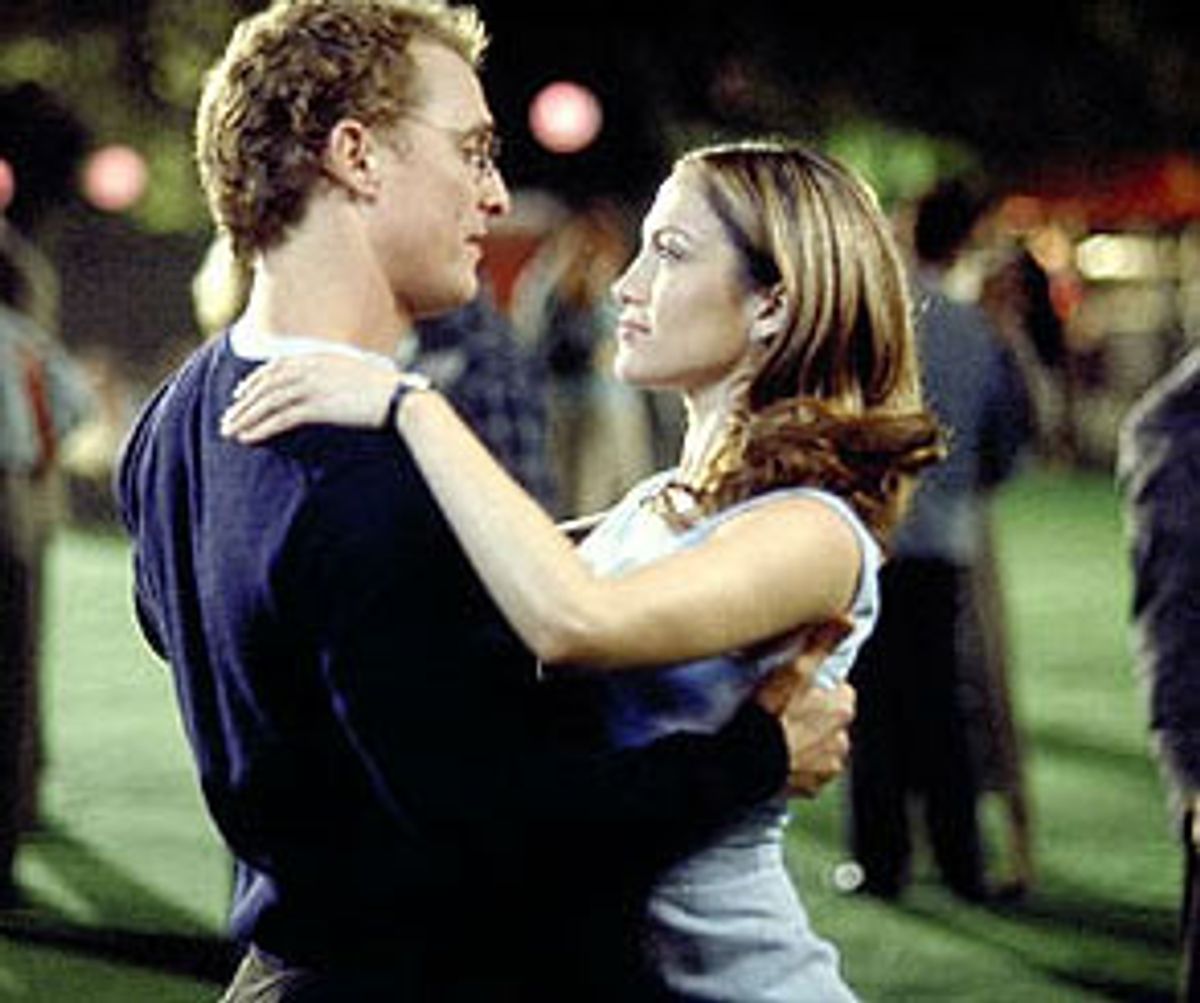 If "The Wedding Planner" weren't tethered to earth by a thread of celluloid, it might blow away like an early puffball in the wind of a January thaw. But its very sweetness and lightness provide its saving grace; it's a delightful pre-Valentine's Day confection with a gooey center that won't fill you up.

In Jennifer Lopez and Matthew McConaughey, this familiar but briskly paced romantic comedy offers a relentlessly sunny and adorable central couple. Both are beautiful specimens of humanity, but their travails on the way to true love never seem all that serious, and they are more likely to engage in under-the-covers tickling and cuddling sessions than in white-hot passion. Again, that pretty well fits the movie as a whole: "The Wedding Planner" is a chaste, lively and mildly goofy romance to dispel the winter blahs. I'll take it.

Essentially, it's another variation on the "Pride and Prejudice" theme, in which the heroine is a smart, socially adept young woman who's so busy organizing everybody else's life that she has pretty much forgotten about her own need for L-U-V. Out of nowhere she meets a guy and falls for him hard, only to discover in the most painful way possible that he's Mr. Wrong. But as hard as she tries to despise him, she can't quite get him out of her head. And who knows? He might just turn out to be not so vile in the end.

Lopez has never impressed me much as an actor, but she's well-suited for the role of Mary, the efficient, officious San Francisco wedding planner whom we see, as the film opens, commanding the troops at a large Catholic ceremony. She gives the bride a heartfelt pep talk (which reappears later in the film to terrific effect); repairs a bridesmaid's décolletage with a clothespin; tells the bathroom-bound priest, "Father, you're gonna have to hold it"; and barks cryptic instructions into her headset: "The FOB is MIA." (Translation: We can't find the father of the bride.)

As ever, Lopez's acting seems dominated by vague ballpark estimates of human emotion, but I can believe her a lot better as this cheerful, slightly superficial professional gal than as a hard-ass federal agent (in the entertaining but overpraised "Out of Sight") or a high-powered shrink (in "The Cell"). Mary wears expensive but understated clothes and a modest good-girl hairdo, which successfully show off both Lopez's remarkable heart-shaped face and her celebrated physique. I meant to get through this review without mentioning Lopez's most celebrated, er, asset, but "The Wedding Planner" does feature one rear view of Mary in an ivory wedding dress -- no, that's not a spoiler -- that sent ripples of appreciative awe through the audience.

But Mary's spinsterish private life of steaming her curtains, watching "Antiques Roadshow" and playing Scrabble with seniors is thrown into disorder when a hunky pediatrician named Steve (McConaughey) pulls her from the path of a runaway dumpster. Mary is more concerned about the Gucci pump she got stuck in a manhole cover. "You saved my shoe. And my life," she says breathily, while Steve is still lying on top of her in the middle of the street. Smelling romance in the air, Mary's ditzy, meddlesome assistant -- a comic cliché wonderfully performed by Judy Greer -- manages to ditch Mary and Steve in front of an old musical being projected in San Francisco's Golden Gate Park.

Now, as anybody who's lived in the city can tell you, you'd need a parka to sit in Golden Gate Park on virtually any night of the year. (And unscheduled rainstorms, of the sort that postpones Mary and Steve's first kiss, are pretty much unheard of.) But petty details aside, this is the scene where Pamela Falk and Michael Ellis' breezy and surprisingly adept screenplay shows its quality. Consider this exchange, just after Mary has persuaded Steve to dance and they're slowly melting into each other. (I may have paraphrased the dialogue slightly, but the gist is accurate.)

She: Where'd you learn to dance like this?
He: Ballroom dance class.
She: Oh! You're gay.
He: The gayest.
[Pause]
He: No, no. My mother took me when I was 8. She wanted me to be Fred Astaire. I wanted to be Marcus Welby.
She: Mm. So now you're a little bit of both.

There's a masterful economy of flirtation, uncertainty and mutual seduction packed into that single minute of screen time. When it begins, Mary and Steve are just two strangers fooling around. When it's over, they're falling head over heels for each other. McConaughey isn't necessarily a better actor than Lopez, but his languorous country-boy good looks are a nice match for her Catholic-girl sweetness. When you see them together, you can immediately envision them wearing matching pajamas and sharing the Sunday paper.

Of course there's a problem, and it has to be a doozy to interrupt this blossoming love affair. The next time Mary sees Steve, he's being introduced to her as "Eddie," the fiancé of one of Mary's clients, a blond, brassy and bronzed rich girl named Fran (Bridgette Wilson-Sampras). We're at ballroom dance class, of course, and Fran, suspecting nothing, sends Eddie and Mary onto the floor while she takes a phone call. They reprise their earlier slow dance as a hilarious comic-erotic tango -- both Lopez and McConaughey are dexterous and agile dancers -- while Mary quietly spits venom: "What I'm thinking about," she murmurs to him, "involves a machete and a pair of pliers."

There's a reason dance is used so effectively in "The Wedding Planner": Director Adam Shankman is a longtime film choreographer whose credits stretch from "Mission to Mars" to "Boogie Nights" to "Weekend at Bernie's II." But after this high point in the dance studio (which features an enjoyable cameo by comic Fred Willard), the movie slides into a long groove that is enjoyable enough but adheres to formula every step of the way. Naturally Steve/Eddie has an explanation for his apparently outrageous behavior, and naturally Mary doesn't want to hear it. Out of professional pride Mary refuses to give up Fran and Eddie's wedding, and the oblivious Fran keeps coming up with reasons to strand the duo together, saying blithely, "I trust you guys."

There are amusing gags about how a wedding planner can tell a marriage is going nowhere ("I Honestly Love You" by Olivia Newton-John is a key indicator) and an unrewarding subplot about Mary's father (Alex Rocco) and the buffoonish Sicilian immigrant (Justin Chambers) he hopes to set her up with. There are random comic bits involving Fran's rich and boorish parents and a limestone penis that winds up in Mary's purse. Shankman doesn't take much advantage of shooting in America's most photogenic city, but he faithfully keeps things moving toward the collision of implausible circumstances that will set all the movie's wrongs right. In fact, the denouement of "The Wedding Planner" is far clumsier than what has gone before, but even that failing can't cast a shadow on this whimsical, low-calorie treat.