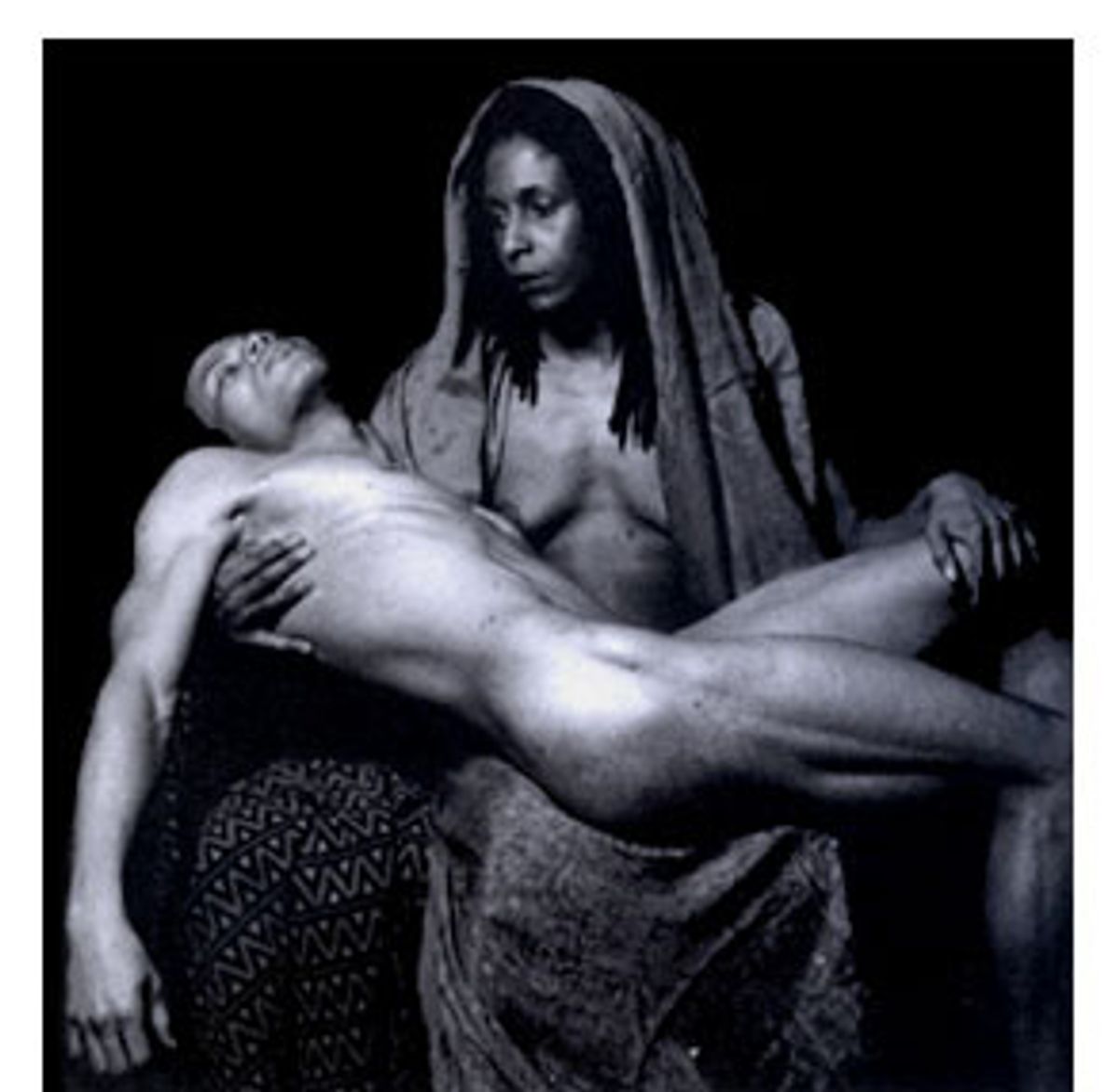 Artist Renée Cox was thrust into the news Friday when the New York Times ran a front-page story on the ire one of her photographic works raised in New York Mayor Rudy Giuliani. He called the work (in which the artist is nude, standing in place of Jesus in a rendition of Leonardo da Vinci's "The Last Supper") "disgusting," "outrageous" and "anti-Catholic" and called for a decency panel to keep such work out of museums that receive public money. Cox said, "Get over it," and went skiing for the Presidents Day weekend. Salon caught up with her Tuesday at her studio in Brooklyn. She had just come in from teaching her class on fundamentals of photography at New York University.

Have you talked to Giuliani or heard anything new since the front-page New York Times story on Friday?

I haven't heard anything personally. I heard he might have said some things on TV this weekend but I wasn't around.

You say your work isn't about sex. Why isn't it? You are there, naked, and it's sexual; it's not like Botticelli's Venus.

When I do these images, the sexual element isn't there for me at all. It's about the body and the form. It's not like I have an image there with me and a dildo flying around. People keep trying to put it in this context. The thing is, here in America, it still is a very puritanical state of mind going on and when people of Giuliani's ilk see something that is nude, somehow they react that it's obscene. I say you should refer back to Greek antiquities. The Met is full of naked Greek statues and no one is upset about that.

It's 2001 and we should be able to push past this. I don't see the big deal. I lived in France and this kind of thing is not a problem. Here, they keep saying it's obscene ... maybe because it's a black female body. We are all created in the likeness of God; there shouldn't be any problem with anyone presenting themselves as such. The hoopla and the fury are because I'm a black female. It's ironic that Chris Ofili [whose work "The Holy Virgin Mary" was attacked by Giuliani last year when it was shown at the Brooklyn Museum of Art] and I are both of African descent ... It's about me having nothing to hide. For me to represent myself in the nude is the purest way of doing things.

I don't know what they're talking about, anti-Catholic. I grew up Catholic and I feel that as a Catholic and having been put through that, I have the right to critique it. It has nothing to do with being anti-anything. All my art is very personal -- it comes from a personal place. And this piece ["Yo Mama's Last Supper"] is from a much larger body of work called "Flipping the Script" that includes the Pietà, Adam and Eve and [Michelangelo's] David.

But it's not just any body. It's your very good-looking, sexy body.

Has all your work been photographic?

Yes, it's my medium. I wanted to be an independent filmmaker. I was always interested in the visual. But I had a baby boomer reaction and was into the immediate gratification of photography as opposed to film, which is a more laborious project. But I started making little films with an 8 mm camera in fifth grade.

Have any artists inspired you?

Not necessarily, no. I've looked at many things and studied. But it's not a situation where I've embraced any particular person. What I've done is melded all of it together -- Gordon Parks, Richard Avedon, [Irving] Penn. My background was in fashion, but there's no idol worship.

So, to get back to "Yo Mama's Last Supper" -- you were critiquing the Catholic Church ...

And the position women have held in the church, which is not holding any position. It becomes a protest, but that wasn't my intention. It was more about a critique. It also comes from research that I did -- about the Catholic Church and how affairs were handled around slavery and Catholicism ... Are there messages underneath? No, there are not. It's just that African-Americans are invisible, especially in Renaissance art. And Christianity is big in the African-American community, but there are no representations of us. I took it upon myself to include people of color in these classic scenarios. That is the most important thing.

My work is always about breaking down stereotypes. These topics are not new to me. I've been dealing with this since 1993. I've been talking about the empowerment of women, about [referring to the photo of her, naked and in high heels holding an infant] "Pick up the baby, put on your pumps and keep on pressing." I'm saying you can play the Christ figure, girls, and sit at the head of the table and preside.

Apart from that, ["Yo Mama's Last Supper"] is visually seductive; it's not about propaganda. That doesn't bring people in, it shuts people out. It's like Russian constructivist art -- heavy-handed. I'm not interested in doing that. I would like people to look at this and say, "You go, girl" or "You've gone too far." I mean, William Donohue [president of the Catholic League] asked me whether I'd be offended if I saw art showing someone urinating into the mouth of Martin Luther King! I don't think of those things. I said, "You're the Catholic and you're into S/M!" Like, I was ... Whoa! I don't go there. There is no art that can offend me. What offends me more is when we have people starving in the streets and people like Amadou Diallo and it takes City Hall two or three days to comment, but they can comment on my art in two or three hours. Thatoffends me.

As far as you know, Giuliani still hasn't seen your work?

As far as I know, no. They don't operate from an honest place. Anyone who has seen it says it's a beautiful piece and what's the problem?

Why isn't it offensive that you made all the disciples black except Judas, who is white. Has anyone commented that that is racist?

I haven't had that comment. I can say that this is a work dealing with issues of race and gender and stereotypes, and it was a tongue-in-cheek kind of thing. It's a little provocative, for sure. I wanted to have fun with it. Don't get me wrong: Some of my best friends are white! It's not about that. The whole issue of race is for people to be able to sit down and talk about these things. Women rule. I was saying, "This is my dinner party." Why not? With Judas, I was conscious of this. But I didn't make him that Caucasian, either. I could have done blond, blue eyes and Aryan. But my Judas could be American Indian or Latino. He's not a super-Caucasian.

Have you ever received a National Endowment for the Arts grant? And do you think states should support the arts?

No, I've never gotten an NEA grant. I got a New York State Foundation for the Arts grant a few years back. But this country doesn't support the arts anyway -- in Europe they do. I think it would be a grave mistake to not have the NEA. I consider myself a cultural worker. Whether people want to listen or not, you have to have people out there who will step up to the plate and do things that are challenging. I think the state should support the arts. Hey, the Catholic League is taking its tax write-off; it's a nonprofit, why shouldn't the artists get theirs? If private groups start supporting the arts it's a problem. I mean, what if the National Rifle Association decides to sponsor the arts -- are we going to start making targets?

What do you think of Michael Kimmelman's comments in the Times the other day that your work is "frankly narcissistic"?

I don't consider it narcissistic. For me, the biggest thing is that people of color have learned, after years of oppression, to have self-hatred. I have tried to heal myself. I no longer suffer from self-hatred. It's what bell hooks talks about in "Sisters of the Yam" -- I'm not standing in front of mirrors. It gives me a certain pride ... I don't have to look to Caucasian culture for what beauty should be about. It's about looking into who I am and being proud of who I am. That is key. It's too easy to call me narcissistic. My intervention is to say to people of color to love ourselves, be proud of who we are ... It might be scary for many people that black people might start to like themselves. That needs to be changed. If I can make that change, I'll feel like I've done something important.

Would you use yourself if you weren't so good-looking?

What kind of question is that? Use what you got, right? If you got it goin' on, use it. I work at it, too -- hey, I've got two children. My body is part of my work, in a way. I've made that decision to use my body. Like I said, if I use someone else's body, then I have to deal with all these people saying I'm exploiting someone. It's interesting that Caucasian women like Cindy Sherman are using themselves and no one is calling them narcissistic. It's like they have that right. As an African-American woman, somehow it's offensive when I do it. I resent that. I resent that for all folks of color. For me, the beauty of all of this is about celebrating differences.

Where does your confidence come from?

My Jamaican background. We were the rebellious ones they didn't want to deal with. It was never about backing down. We were one of seven black families in Scarsdale [N.Y.]. I've always said what needed to be said. My husband is white; my children are half-white. Don't paint a picture of me as an angry Negro. That's not it. It's about having that confidence and hopefully inspiring little black girls and boys to have confidence. And I don't feel I have to give a ghetto thing -- I'm not a rapper or whatever. I'm coming out of a privileged suburb and I'm black and I'm proud. Can you deal with it? Know what I'm saying? A lot of people don't want to hear that. They want to hear: "I'm from the projects and I've had a tough life." That's not my story. I don't intend to apologize for that.