When animals give back

Whether you're Sen. Robert Byrd or Eminem, it's the convoluted intention that counts, not the offensive slur. Plus: The KKK and Imelda on beauty. 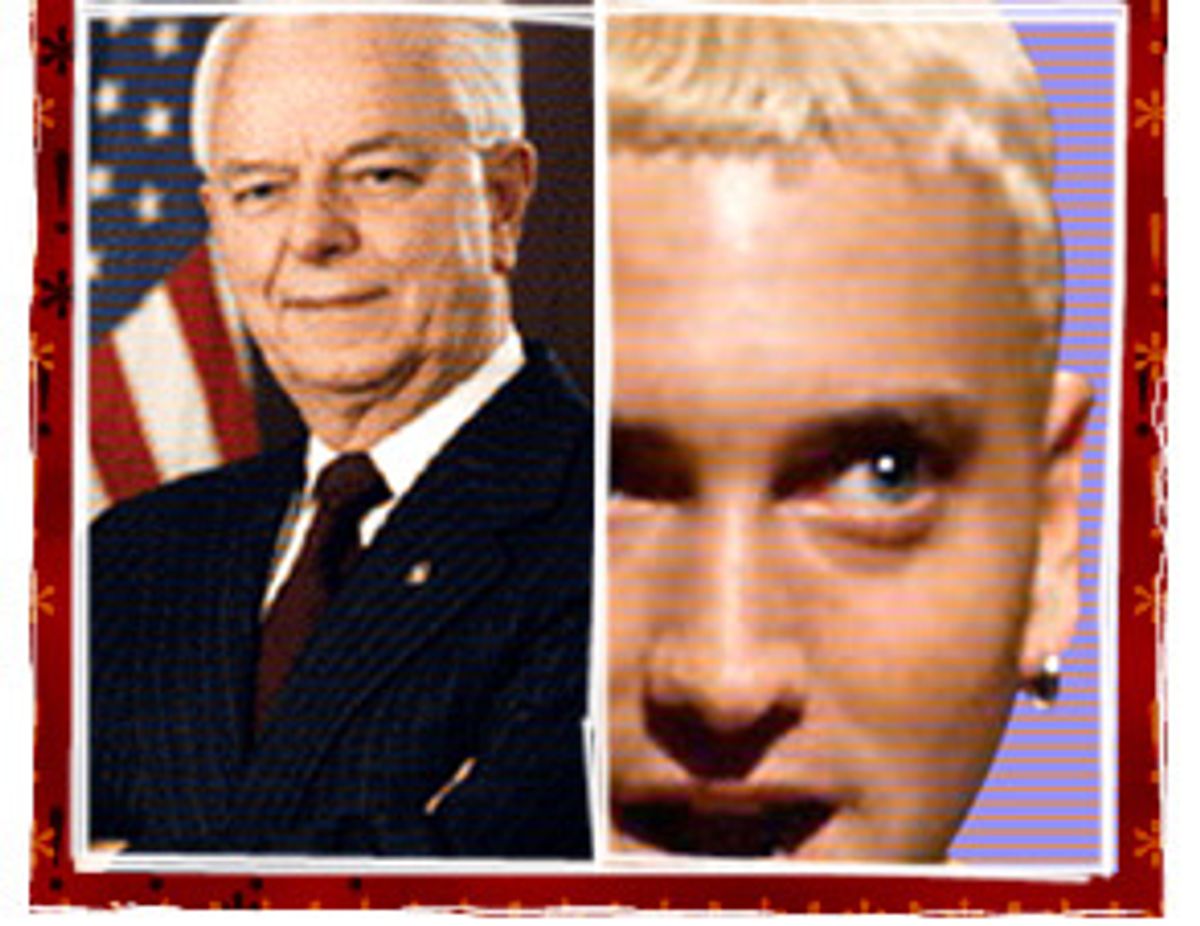 Claiming the words just "popped into his head" as he was trying to articulate the importance of "goodwill" among people of different races, Sen. Robert Byrd apologized last weekend for using the words "white nigger" on national television.

"There are white niggers. I've seen a lot of white niggers in my time," the octogenarian senator and former Klansman said in a taped interview on "Fox News Sunday," trying to make a point about character not being related to skin color. "I'm going to use that word."

Looking at it that way, bestselling rapper Eminem -- who takes pride in not using that word "out of respect for black people" -- may concur, at least in theory, with the senator's point.

The recent Grammy nominee, who named himself after the candy that can be any color on the outside but is always dark on the inside, has employed similar logic in explaining why he uses the word "fag" or "faggot" 13 times in 18 songs on his most recent CD. Eminem claims he uses the word to describe weakness, arguing that there are plenty of "fags" who aren't gay.

Well, as long as it's the convoluted intention, and not the offensive slur, that counts, here's an idea: Eminem should follow the example of Elton John and join the scary representative from West Virginia in a heartfelt duet at next year's Grammy Awards. The senator could rehabilitate his image by sharing a song and a hug with the country's leading white "that word," and Eminem could demonstrate his ability to look past an epithet directed at him by embracing a heterosexual "the other F-word" on TV.

As long as they explained what they really meant by their statements afterward, all would be forgiven and statuettes might be awarded. Just think of the message it would send about the importance of promoting goodwill among people of different bigoted views.

Should that fail, the senator and Slim Shady could always try to adopt a stretch of interstate highway together.

CNN reported Monday that the Supreme Court has ruled to allow the Ku Klux Klan to participate in Missouri's "Adopt-a-Highway" program. The program is a volunteer cleanup effort in which groups such as the Girl Scouts and the Rotary Club agree to keep a stretch of roadside clean in return for a sign acknowledging their civic efforts.

The ruling comes after a seven-year legal battle between the state of Missouri and the Klan. In 1994, the KKK, led by member Michael Cuffley, requested a half-mile stretch of Interstate 55 near St. Louis, a route well traveled by black students bused to county schools as part of a court-ordered desegregation initiative.

The Missouri Department of Transportation tried to block the move but, in November 1999, a federal judge ruled that the group had the right to participate in the environmental program.

"Most decent people are concerned about the environment," Thomas Robb, director of the Knights of the Ku Klux Klan, told the Associated Press after the initial ruling, apparently referring to people like himself and Cuffley. Six days later, Cuffley went on the lam after failing to appear in court on a felony burglary charge.

The sign, which read, "Adopt-a-Highway. Next mile adopted by Knights of the Ku Klux Klan, Realm of Missouri," was torn down within 12 hours of going up, and was removed and replaced twice in the following two months.

After the federal ruling on Monday, law professor David Cole told CNN, "The Klan, like everyone else, can pick up garbage on the highways ... But when and if they engage in criminal conduct or violence, the state should go after them."

In August 2000, the Jefferson City News Tribune reported that the KKK had not picked up litter, mowed grass or performed any of the beautification duties required.

Luckily, it's not every crazed thug who ignores her beautification duties.

Former first lady Imelda Marcos, who recently returned to the Philippines after fleeing in 1986 with her late husband, dictator Ferdinand Marcos, has opened the Shoe Museum on Shoe Street in Marikina, a Manila suburb and cobbler colony.

"This museum [is] making a subject of notoriety into an object of beauty," Marcos told the London Guardian. "More than anything, this museum will symbolize the spirit and culture of the Filipino people. Filipinos don't wallow in what is miserable and ugly. They recycle the bad into things of beauty."

The epicurean Filipino masses -- some of whom had swarmed the presidential palace 15 years earlier -- had taken a thrilling peek at the things of beauty once before. Corazon Aquino, Marcos' successor, displayed the collection of 1,220 pairs of shoes left behind by his fleeing wife as "a reminder of the type of excess that should never be allowed again amid the nation's rampant poverty."

The Guardian reported that when the massive collection was first found, "Marcos said her only purpose in buying so many pairs was to support the Marikina shoe industry, which provides a livelihood for tens of thousands of people."

Which is why the museum displays shoes by Christian Dior, Givenchy, Chanel, Salvatore Ferragamo and other famous Filipino cobblers.