"Inside Pitch" by George Gmelch

Podunk towns, brutal competition, wooden bats and dirty laundry -- an anthropologist shows what the lives of pro baseball players are really like. 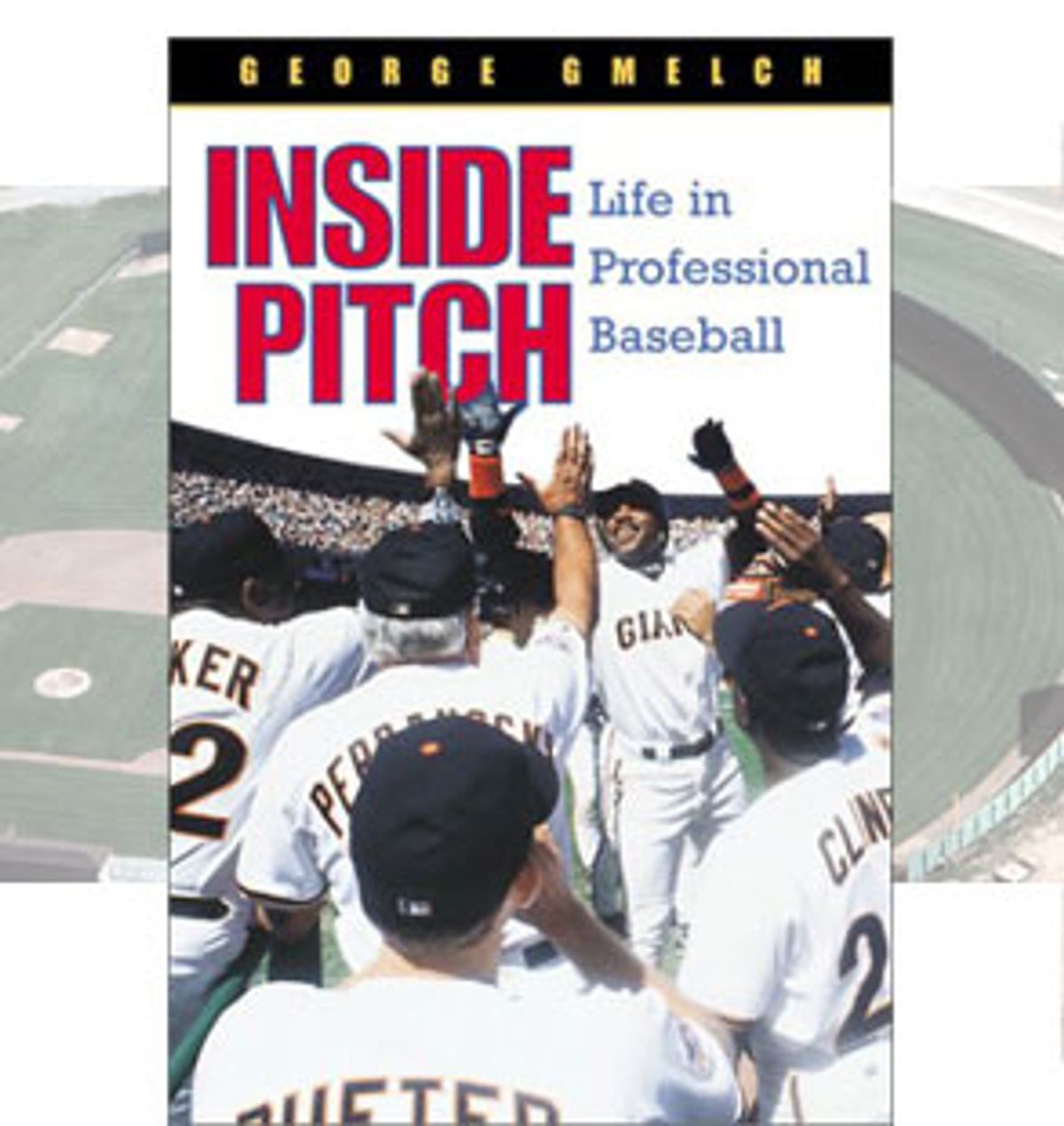 If I say "professional baseball player," what do you picture? Stars with several years left on their multimillion-dollar, multi-year contracts that they were delighted to sign demanding a trade if their team won't renegotiate? Players ignoring fans or treating them rudely, refusing to sign autographs except for a fee? Big leaguers with no loyalty to their team or city, ready to take the first flight out for a few dollars more?

All true, certainly, in the major leagues. But as George Gmelch's fascinating new book, "Inside Pitch: Life in Professional Baseball," shows, there's far more to professional baseball than that. Gmelch, a professor of anthropology at Union College in Schenectady, N.Y., was a first baseman in the lower reaches of the Detroit Tigers organization in the 1960s. Thirty years later he returned to baseball as an observer, spending five years studying life in the game using the same methods he'd used to study development in Mexico and urbanization in Ireland. The result is both eye-opening and readable.

Picture yourself as a professional ballplayer just starting out. You've been drafted by one of the 30 major league organizations, and now, a few weeks after your high school graduation, you find yourself with a rookie league or short-season Single-A team far from home. You immediately notice the high level of competition. On every level you've played, you've been the star player. Now you're on a team filled with former star players. Everyone's bigger, faster, stronger. The pitchers are tougher. Plus, for the first time in your life, you're doing nothing but baseball. Between the seven full days a week you spend at the ballpark and time on the road, you're at it 60 hours a week. It's a grind, physically and mentally. Everything you do is measured statistically, in far more detail than it was in college or high school. And those numbers are sent back to the big club daily. In school they were something to brag about. Now they're used to determine whether your career will continue. Did I mention you're swinging a wood bat for the first time in your life? Every amateur league in America (save one, the summer Cape Cod League for college players) uses cheaper aluminum bats, which are easier to hit with.

Now consider this: On your few hundred dollars a month salary, you have to find a place to live and manage to eat a decent diet -- you're an athlete, remember? You probably don't have a car to get around the tiny town where you're living, where there's nothing to do and you're going crazy. (Odds are you grew up in the suburbs of one of the large cities of California, New York, Texas or Florida.) You're homesick, so you call your girl or your parents back home a lot. At least for a month, until you get the sticker shock from your first long-distance bill. For the first time in your life, there's beer in the fridge and nobody telling you not to drink it. And laundry. Do you know how to do laundry?

Now, you're in right field. First and second, one out. Line single to right. Quick! Where do you throw it? Is your head in the game?

The chances are 1-in-4 that you're from Latin America, in which case you're probably a year or two younger, don't speak English, can't find the food you're used to eating, and sometimes face discrimination in the form of people unwilling to rent to you, or hard looks from the locals if you manage to get a date with a town girl.

While researching "Inside Pitch," Gmelch rode the buses in the minors and talked to the stars in the majors. The book is a journey through a baseball life, from scouts looking at high schoolers, through rookie and instructional ball, and on up the ranks to Low A, High A, Double A, Triple A and what Gmelch insists only people unfamiliar with the majors call "The Show." And then beyond: Gmelch includes chapters on wives, groupies and life after baseball.

Along the way he and the players and coaches he quotes extensively explain about life in the game, both at the ballpark and away from it. Players talk about how the game on the field is different from one level to the next and how, as they start to get a little more comfortable and make a little more money as they move up (though the real money only comes with a promotion to the big club), life gets a little easier and more professional, and the towns get bigger and more interesting.

Gmelch is at his best in describing players' mental approach to the game, which is perhaps a more important factor than in any other sport. The coaches he interviewed talk about competitiveness being the key factor in determining a player's success, greater even than talent. And staying on an even emotional keel, which allows players to concentrate and stay focused on the game day in and day out, can often be the difference between success and washout. "If you live and die with every pitch," says one player, "it will wear you out after a while. The mental approach is everything."

The culture of the game comes alive in "Inside Pitch" as Gmelch explains not just the lingo, traditions, taboos, pranks and rituals, but why they're important. These things help entire teams maintain that even keel. Baseball, with its everydayness, always comes back to consistency.

The best thing about the book is hearing the players talk about their experiences. Major leaguers are so wary of reporters that they rarely say anything worth listening to. But the minor leaguers Gmelch talked to had no such qualms yet, and the big leaguers dropped their guards some once he reminded them he was an anthropologist studying their culture, not a reporter digging into their personal lives.

Here's Paul Noce, an infield prospect with the Cubs, talking about the day he was called up from their Iowa farm team. "We packed and left Des Moines that night and drove half way to Chicago and stopped at some motel. I remember telling my wife, 'You know, they can never take this away from us. We made it, even if it's just for a day. This is something we'll always have.'"

That moment -- the thrill of achieving the lifetime goal of making the major leagues -- is the reason, Gmelch notes, that it's almost unheard-of for a ballplayer to leave the game voluntarily. (Noce, by the way, lasted just the one year in the majors.) After reading "Inside Pitch," you'll understand a little better why players cling so fiercely to the game despite the hardships of the lower levels of the minors. And you might even have a little better feeling about that boorish superstar and his huge salary.