Save the children, or the Buddhas get it

Afghanistan's roving ambassador tells a Southern California student association why he was ready to "blow a statue" himself. 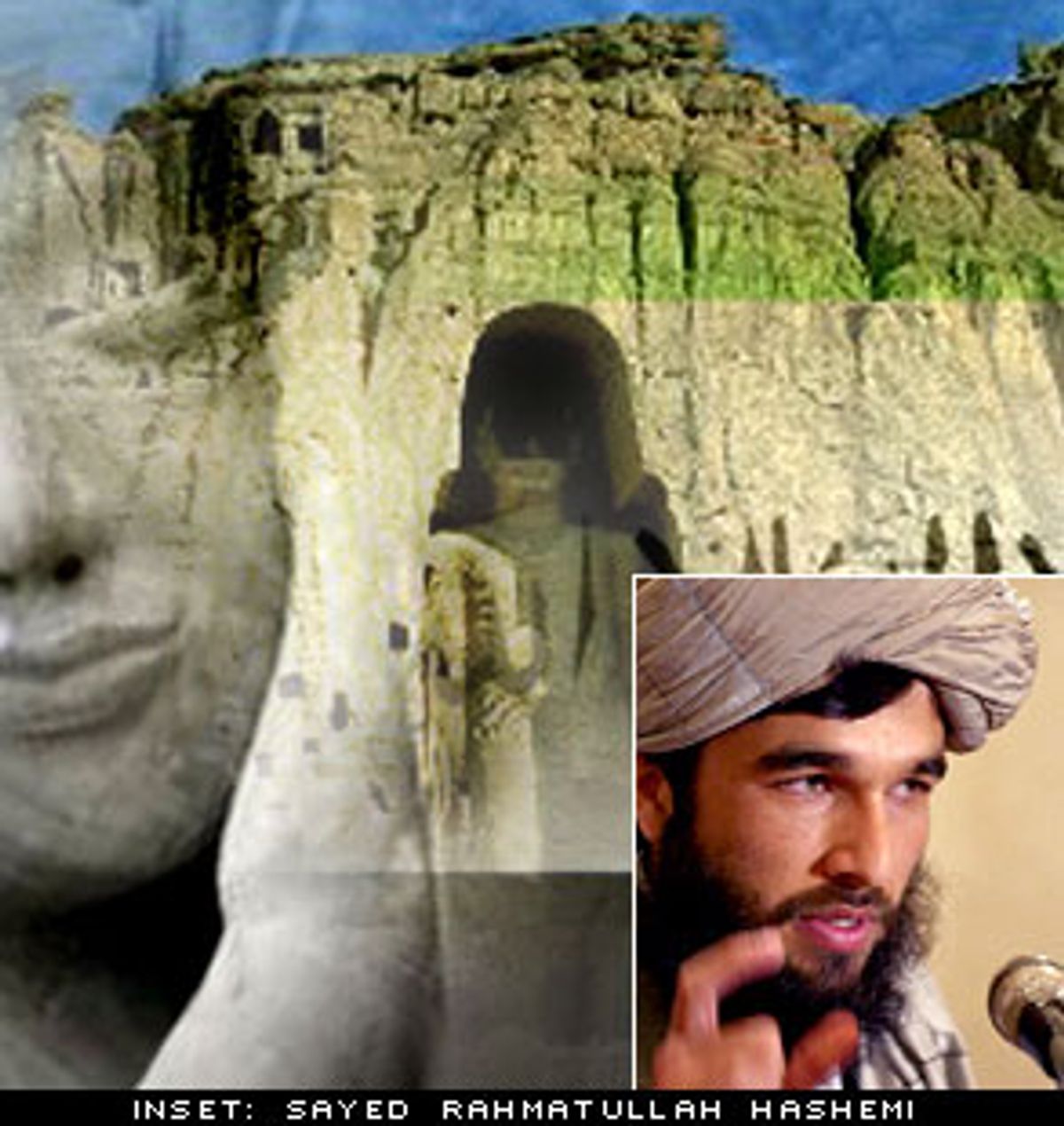 India offered to take them home for safekeeping. Muslim nations denounced their destruction as "un-Islamic." Even most Afghans -- including ranking members of the Taliban -- opposed the pyrotechnic destruction of the Buddhas of Bamiyan, which were considered the greatest remaining examples of third and fifth century Greco-Indian art in the world until they were blown to bits last week amid scattered cries of "Allahu akbar" ("God is great") and "Ma sha' Allah" ("Whatever God wills").

Citing the Islamic principle of the thing, Qadarullah Jamal, the Taliban's minister of information, claimed the statues were destroyed because they were being worshiped as idols. This explanation was widely repeated, first by the Taliban's leader, Mullah Mohammad Omar, then by Foreign Minister Wakil Ahmad Muttawakil and then by much of the Western press. On the surface, it explained everything. On reflection, it explained nothing. Not only are there are no Buddhists living in Afghanistan, but Muttawakil has allegedly assured the nation's Hindus, Sikhs and single Jew -- an elderly rabbi who stays in Kabul to protect a synagogue -- that their temples will be protected.

So the belated attack of religious fervor may have just been a handy religious metaphor for an entirely secular snit fit. Sayed Rahmatullah Hashemi, Afghanistan's youthful ambassador-at-large, learned of the Buddha blitz while on a public relations tour of the U.S. designed to change the way we see the Taliban. He was forced to call his "headquarters" to confirm reports of the destruction, which were at first denied.

As Hashemi launched a serious charm offensive at the University of Southern California, UCLA and UC-Berkeley, his leaders launched antiaircraft missiles at two of the world's wonders. A lesser publicist might have melted down. But the cool, unruffled and media-smart Hashemi instead spun his story into a contemporary parable of ironic iconoclasm. That the high-tech idol smashing -- which has religious connotations for Christians, Jews and Muslims alike -- should also function as a cautionary tale about modern-day secular idol worship seems fitting for a fundamentalist movement with a 24-year-old ambassador who peppers his lectures with statue jokes.

"We are only concerned about Afghanistan. And please do not try to make assumptions. Ask me questions. In the Bay Area just yesterday, a journalist asked me, 'Why do you hate women?' And I told him, 'Why do you beat your wife?' And he said, 'I don't beat my wife.' I said, 'I don't hate women.'"

He may have murdered them at USC, but Hashemi, who fled Afghanistan as a boy and returned six years ago to join the Taliban, is not your mother's extremist foreign ideologue. Explaining that his leaders decided to "blow the statues" after "UNESCO and NGO from Sweden -- or from one of these Scandinavian countries" -- sent workers to repair the damage that decades of rain, neglect and war had done to the statues, Hashemi pointed out that Afghanistan itself has been worn down by decades of drought, foreign intervention, civil war and now sanctions.

"I know it is not rational and logical to blow the statues for retaliation of economic sanctions," he said. "But this is how it is."

"The council of people had told [the foreign agency restoring the statues] to spend that money in saving the lives of these children instead," Hashemi said, explaining that 300 children have died since economic sanctions were imposed in January. "And these guys said no ... The people were really pissed off. They said, 'If you don't care about our children, we are going to blow those statues.'"

Islam allows idols to be destroyed when they become harmful, Hashemi pointed out during another lecture, at the Beverly Hilton Hotel. The Buddhas, apparently, were spoiling it for everyone.

The roving envoy also criticized United Nations Secretary-General Kofi Annan for arranging to meet with a Taliban leader in Pakistan, saying he "never bothered to enter, to talk about these children ... the 6 million refugees ... the poverty of Afghanistan. He only goes to that region because of these statues. They only care about their picnic site one time. Maybe they'll have a good picnic site there, seeing those statues."

They may not have a good picnic site anymore, but if they hurry, they might still make the barbecue. Mullah Mohammad Omar ordered the sacrifice of 100 cows on Friday to atone for taking so long to destroy the two enormous Buddhas. And the beleaguered Hashemi, one presumes, is going to have a good deal more explaining to do.

"You know, really, I am asked so much about these statues that I have a headache now," he said after the first question from the audience about the statues. "If I go back to Afghanistan, I will blow them."

This really killed them.