A bridal gown is part of the story a woman creates about herself. And nowadays, everybody likes to think of herself as a different story. 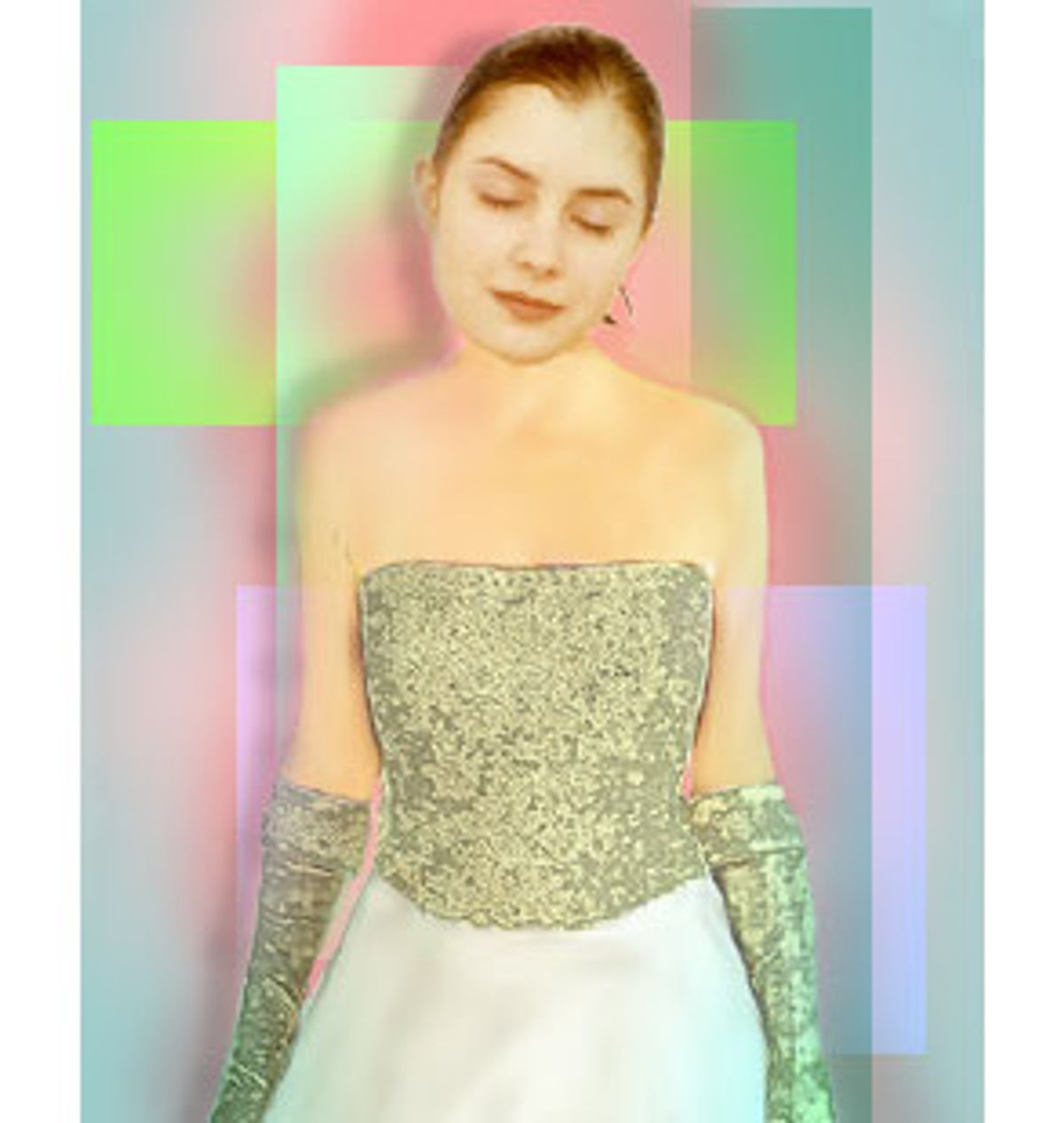 My friend Becky was working for a candidate in the Illinois governor's race who was about to lose by a landslide. One afternoon, depressed and in search of pantyhose, she wandered into Filene's Basement on the day of their annual sale. That morning, women had lined up at dawn and prepared to arm-wrestle their friends for low-priced merchandise, and by the time Becky got there, the store had been picked clean by ravenous bargain buzzards. Somewhere along this expanse of scorched linoleum, on a forlorn rack, hung a Vera Wang sample wedding dress for $299. It was Becky's dream dress.

At the time, Becky was living with a guy she didn't like much anymore. So she bought the dress, took it home, shoved it in a trunk, broke up with her boyfriend and met someone new at a wedding soon afterward. When he asked her to marry him, he wasn't surprised to learn that she already had the dress.

I love this story because it says a lot about Becky. If you knew her, you'd know that all the elements are there: the cause, the coincidence, the steal, the way things sort themselves out on a dime and hurtle toward their inevitable happy conclusion. It also says a lot about the symbolic power of wedding dresses. If your job sucks and your boyfriend's a drag, a wedding dress can look a lot like a ticket to the future.

Of course, it's a purely symbolic ticket. When my great-grandmother was married off to a 36-year-old man by her lunatic mother when she was just 16, her first thought was that she'd finally get a chance to get out of the house and spend her own money. Even my own mother couldn't help but count independence as a factor in her decision to get married. At 23, she had never lived away from her parents' house.

By the time my mom got married, the white wedding dress had already ceased to be a symbol of virginity. Brides were no longer "pure" so much as they were just really, really clean. But even if the old meanings are long lost, bridal gowns continue to wield symbolic power. Brides are characters in a story that people never seem to tire of. And the story is both extremely personal and completely universal.

"One of the things about brides," says Lynn Rosenzweig, who designs bridal gowns with her partner, Ivana Rista, "is that they think they want something different from everybody else, but in the end all brides are the same. It's all about how they want to be perceived on one day of their life."

Seven or eight years ago, it was still difficult for a bride to find a chic and elegant dress that didn't make her look like she was going to be married by the Rev. Sun Myung Moon along with 400 of her closest friends. Rosenzweig and Rista were at the forefront of a revolution in bridal wear that began when Vera Wang went where no self-respecting designer (who was not a good friend of the bride) had ever gone before.

Before opening Ristarose, their San Francisco bridal store, Rosenzweig and her partner were struggling ready-to-wear designers with a shop full of flattering dresses and pants. Around the time when Carolyn Bessette Kennedy caused a sensation in her narrow Narciso Rodriguez sheath, women started coming into the store and ordering narrow evening dresses in white. This was a revelation to the Ristarose partners. "Women were coming in and saying, 'I have to have a wedding dress like this.' And we realized, 'Well, that's exactly what we do.'"

"It had never crossed our minds to do bridal. The whole image of the bridal industry at that time was nasty, poufy dresses. Designers didn't want to be associated with that. And then Vera Wang became really popular in 1994, which is when we started, and then the whole industry started changing." Ristarose made its name creating dresses for what Rosenzweig calls "the rock 'n' roll bride."

Rosensweig believes that women often discover something new about themselves in the process of choosing a wedding dress. "A woman may have an ideal of a lifestyle that she wants to have. Or maybe she has this fantasy of the perfect guy. And as soon as she has that lifestyle or meets the guy that fits all the requirements in her mind, she realizes that there are problems with that.

"It's not that easy, and it's not just a pretty picture. And I think it's the same with our dresses," says Rosensweig. "Someone may walk in and say, 'I want a poufy, traditional dress,' and we don't have that. Then she tries one on and ends up getting one of our dresses. Or she comes in with a ridiculously low budget and winds up getting the most expensive dress in the store. Women are unpredictable."

A bridal gown can also be a crucial element in the narrative a woman creates about herself, and nowadays, most everybody likes to think of herself as different. Rista and Rosenzweig were amazed to find that one of their most avant-garde designs, a slim bias-cut silk charmeuse gown with cut-out back and sleeves called Athena, became one of their best-selling gowns.

My sister, who could not imagine herself as a traditional bride, chose a hot pink A-line gown for her wedding. My sister-in-law, who cannot imagine herself as anything but traditional, will wear a made-to-order beaded extravagance. My cousin, a pragmatist to the bone, borrowed her dress from a friend who wore the same size. Unfortunately, it was an ornate ball gown spewing tulle and lace, but she wore it with a shrug. "Why spend the money?"

The most expensive dress I've ever seen was worn by a friend of the family. After getting pregnant on the rebound -- just weeks after her fianci of seven years broke up with her -- she bought a $20,000 Christian Dior gown and married the baby's father in a lavish ceremony. The marriage lasted as long as the pregnancy, but then, she knew it would. The dress was her way of saying "Fuck you" to anyone who thought anything of it.

Buying the dress is part of the wedding story. So, when I called the Vera Wang Bridal Shop at Saks Fifth Avenue, I considered giving a false name. Even in its minimalist, fashion-forward incarnation, the bridal gown is not something you just throw on for size. A woman who tries on wedding dresses with no wedding on the horizon is a woman you back away from slowly.

In the film "Muriel's Wedding," Toni Collette's character makes her friend really worried when, with no marital prospects, she starts making appointments at bridal shops. No matter how many unworn shoes or bad pants a woman might have in her closet, only the most deranged Miss Havisham would have a closet full of tulle and beaded satin. Impersonating a bride is not just weird, it's downright transgressive.

The first thing the saleswoman did, when I seated myself on the white upholstered chair under a white, wrought-iron chandelier in a blindingly white corner of the department store, was ask me when I'd gotten engaged. In a panic, I looked down at my hand and realized I had no ring and, worst of all, I had no story. Maybe because I felt bad about lying, maybe because I realized then that I had never spun elaborate fantasies about my wedding day, I was at a total loss.

Unable to supply her with satisfying details, I soon realized I was disappointing her. Here was a bride to be with no friend, no mom, no ring and no engagement story. ("How did your guy propose?" she asked, as she zipped me into a strapless ivory column. "Uh, it just sort of came up in conversation.") My imaginary budget of $2,500 was low ("Do you have anyone telling you not to go over a certain amount?"). And my imaginary location was grim ("Um, my mom's yard?"). Even my imaginary date, Sept. 15 -- which by pure serendipity happened to fall on a Saturday, or I might have made her cry at the thought of my tying the knot on a Wednesday -- was ridiculously, unmanageably soon. My story was terrible. I was a pathetic imaginary bride to be.

Later, after I'd tried on five gowns, I thought what my dreary lack of nuptial imagination said about me. If I was making it all up, why not make up something expensive, or romantic or bizarre? I worried for a minute about possible abnormalities. Then my thoughts turned to a pure white A-line Vera Wang with a draped bodice that I tried on twice and about which the saleswoman had proclaimed, "Hands-down, the one."

It was called the "draped crumb-catcher." It exceeded my imaginary budget by about $500. It was my dream dress.