"The Sopranos" deals with female emotional and sexual desire better than any other show on TV. 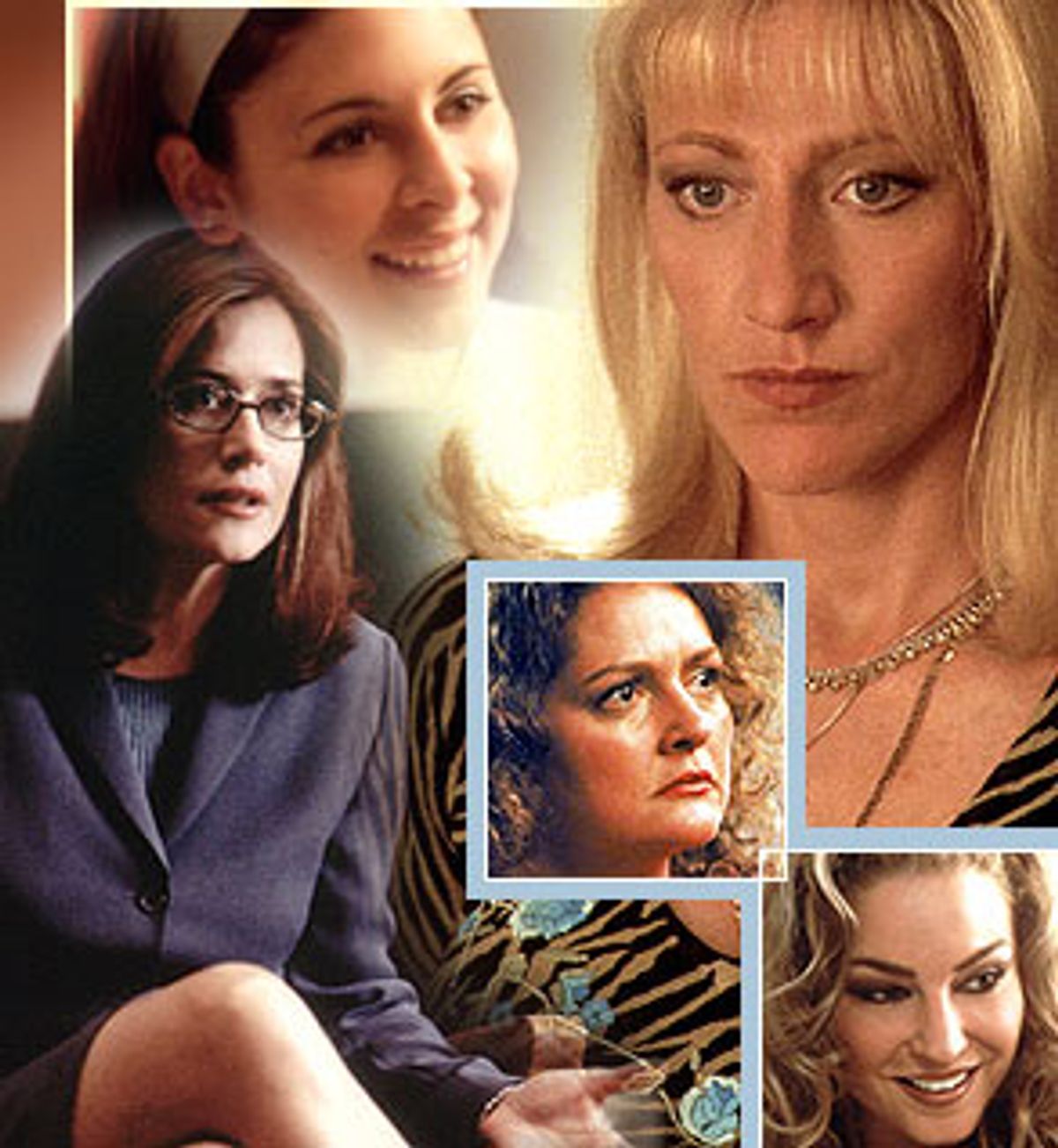 Rape. Murder. Bitch-slapping. This season, "The Sopranos" has shocked regular viewers by sharply ratcheting up the violence against women.

But this savagery underlines one of the show's strengths. Unlike Francis Coppola's "Godfather" epics or Martin Scorsese's "GoodFellas" and "Casino," David Chase's "The Sopranos" deals brutally and honestly with the relationship between men and women. And it paints the female characters just as vividly as the male ones.

Sure, "The Sopranos" is mainly about New Jersey Mafia men. But it's just as much about the women trying to live with these men. While the men go about their business on the mean streets, the women are at home, in restaurants, at school or at Bada Bing! trying to be gladiators (gladiatrixes?) in their own right.

But as the film "Gladiator" (which has replaced "Godfather" as the series' cinematic touchstone this season) tells us, survival comes through sticking together against a powerful enemy. And the men in "The Sopranos" have had more practice at this. They work together based on the last remnants of the Mafia code: Don't rat, don't mess with another made man and stay loyal to a good leader until he proves otherwise. Paulie, Silvio, Furio and Christopher do what Tony Soprano needs from them and they respect, obey and protect him. They move as a unit.

The women have a harder time; there is less opportunity to stick together. Tough Carmela, the soul of the show along with her husband Tony, is alone in the world except when everyone gathers around her dinner table. She gets her daughter's love occasionally -- when Meadow has been chased out of her college dorm room by a psychotic roomie or needs new clothes. And she gets disdain from the neighbor women, who fear her husband. And then there's restaurateur Artie Bucco's wife -- who is an old "pal," but in one episode lets slip quite wickedly that she had sex with Tony one time long ago when he and Carmela had broken up. Ouch.

But Carmela is a survivor and has her own gladiatrix version of the strength and honor code. She is of the old school -- she married and sticks by a man she loves and still has the hots for (last season's mink coat episode showed that), but she also knows she has made a pact with the devil. Her hubby kills guys and screws a Russian mistress and gets blow jobs from the dancers at the Bada Bing! at least once a week. Yet he usually shows up for dinner -- and Carmela will continue making his pasta as long as Tony shows up. She knows it and he knows it. They have a marital contract that is often strained, but has deep practical underpinnings. Carmela knows that Tony delivers the goods. (In last night's show, Tony doesn't show for dinner and Carm ends up at a shrink of her own, who tells her she should leave him. It's not certain what Carm will ultimately decide to do, but in the meantime, she uses her emotional leverage with her husband to squeeze $50K out of him for Columbia's building fund -- her way of cleansing the family name.)

Though Tony is the philanderer, Carmela is arguably the less faithful of the two: She strays emotionally. She swoons for the priest and the wallpaper guy, and the fact that she makes baked ziti for the priest is in some ways more of a betrayal of her marriage than the kiss she has in the powder room with Mr. Wallpaper. She cooked for someone else! (She was planning to cook for wallpaper man until he came to the wise realization that cuckolding Tony Soprano might not be a life-affirming decision and quickly disappeared.) Carmela is searching for what all women want -- a man who appreciates and craves both the nurturing and the sexual aspects of her personality.

On the other end of the spectrum are the man-eaters -- Tony's mom, Livia (now dead), and his sister, Janice. These two gals, who both had to figure out how to make their way in a male-dominated household, both turned into borderline personality disorder cases with homicidal tendencies. Not only did they not stick together to help other women in the family, they self-destructed after attacking their men. They were a dangerous duo, having decided that the only way to survive was to be even meaner than their protectors/slave owners by half. They resented not having power, so they went one step beyond and broke all the rules the men try to follow. Not only were they capable of murder, but also infanticide and fratricide. They were a lethal mix of the men's business-like cruelty and their own manipulative insecurity.

The younger women (Christopher's fiancée, Adriana, and Tony's daughter, Meadow) still have a chance to succeed where Livia and Janice failed. They both have strength, will and a vision for their lives that includes a career and a passionate partnership with a man. Adriana tries to help Christopher with his writing and acting attempts; she stands by him and also tells him the truth when he messes up. But the underlying bond between them is sex and power. Each exudes both, so it's an even match.

Meadow, now at Columbia, is her father's daughter; nothing gets by her. And, like her mother, she is looking for love. But so far she's looking in the wrong place. Her college boyfriend, Noah, won her over with his intelligence and apparent sensitivity. But he revealed himself as a manipulative egomaniac, dumping her after taking her virginity (and after she tells his name-dropping Hollywood agent father that her dad is in "waste management"). Meadow comes out the stronger of the two, her eyes getting that don't-mess-with-me Tony look when Noah lies to her. This gal will turn out like her grandmother unless she gets some real affection.

Meadow will have a tough time finding it. She is a practical romantic the way Tony is -- she believes in love but has her eyes open the whole time she's making it, in case someone is nearby with a gun. She's also a woman, not a girl. Adriana, in contrast, is a girl who wants her man to take care of her; she'd rather not work as a restaurant hostess (though one can imagine her with her own business). Meadow will need a man to match her in strength and honor if she is ever going to truly give it up.

The women who give up the most are at opposite ends of the social spectrum. Tracee, the sweet-but-dumb dancer at Bada Bing!, dies at the hands of the man she naively thought would protect her. Ralph (this season's hair-triggered Richie Aprile), the man who runs around quoting "Gladiator" about how our actions on this earth will echo through time, beats Tracee to death after she insults him in front of his fellow made men and then stands up to his verbal cruelty.

Dr. Melfi, Tony's therapist, isn't killed, but her soul is mauled when she is raped. In her character we see the dilemma that faces most of the women in the series. At first she believes in the system -- the police capture her assailant and she admonishes her husband and son for losing their tempers. Then, when her attacker is let go on a technicality, she loses her sense of reality and we see her yearn for the clear revenge that only Tony could give her. She loves her "civilized" Italian-American husband but knows that he can't do what his instincts tell him to because it's not right. Tony would do it in a heartbeat, like the snarling Rottweiler in her dreams, because in his world avenging a wronged woman is right. It's his job to do it.

When we see Dr. Melfi's face at the end of the rape episode, we see the agony of "The Sopranos" women etched clearly in her contorted features. Will she ask one man to avenge the outrage committed by another? She is smart enough to know that once she does ask, she will have made a pact for life with Tony. Maybe she should ask Carmela what to do.