We're looking at wholesale pollution of the air and water, and our food is starting to seem kind of scary, but those Bushies sure are well-dressed! 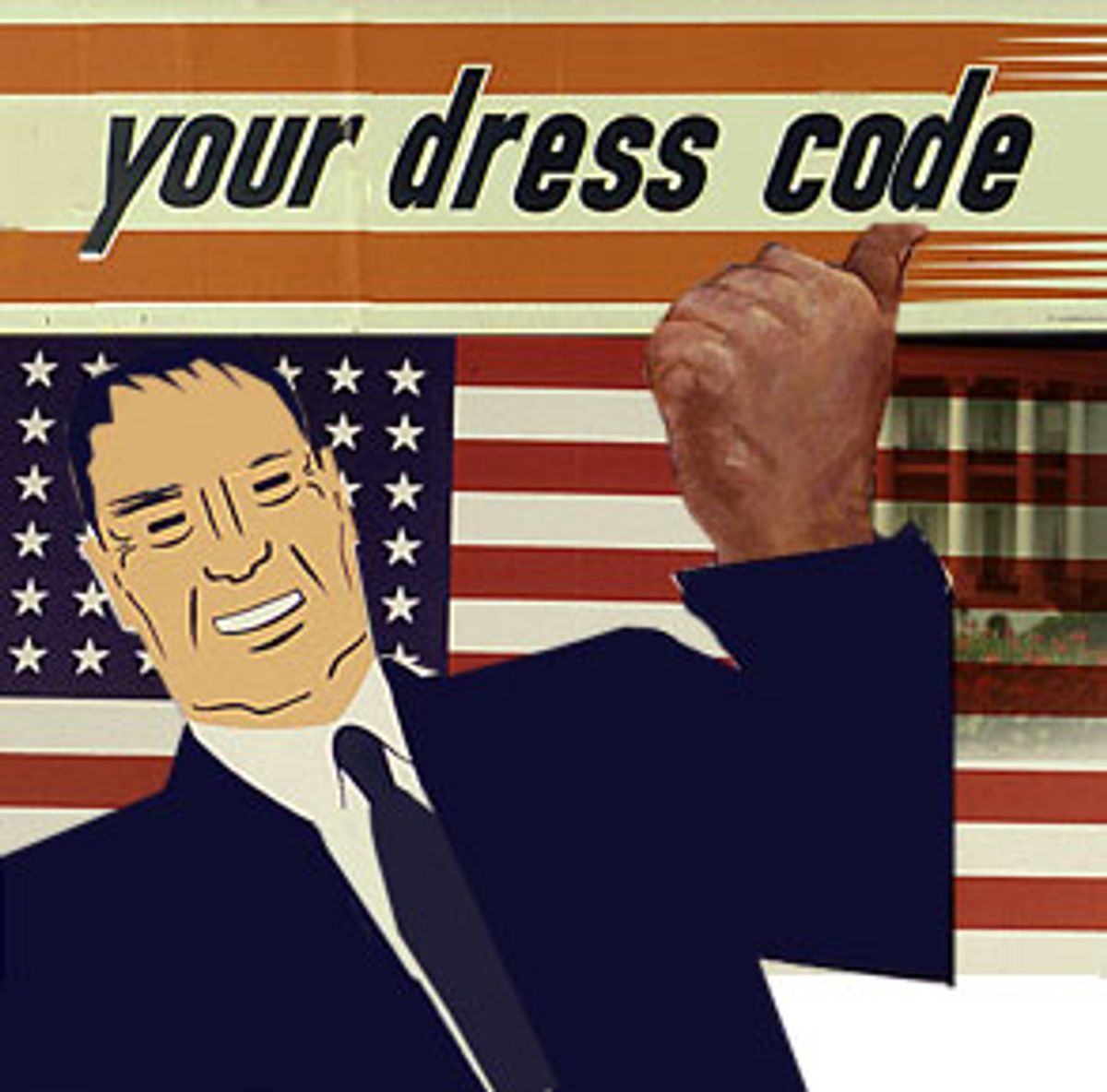 One of the very first decisions President Bush made after his inauguration was to reinstate the White House dress code. Like much of what he does, this move seemed to be primarily aimed at pleasing his father. It can't be easy having George Sr. for a dad, and it's too bad about the president's inner child, but it's hard to watch Bush use policy to gain his father's approval and not feel uncomfortable -- it's like we've walked in on something really private.

The dress code was established initially by the first Bush administration, and, at the time, it specified that women wear knee-length skirts and stockings in the West Wing. In other words, during the administrations of Ronald Reagan and Bush the Elder, only the boys wore pants. Because this was an idea whose time came -- and went -- in the Paleozoic era, the minor style revolution that followed with the election of Bill Clinton was totally inadvertent.

"On Inauguration Day, I was wearing a pantsuit," Dee Dee Myers, Clinton's former press secretary, told Chris Bury on "Nightline" two days after George W. Bush's inauguration. "It was a very cold day in Washington and when I came into the West Wing, I actually broke what had been a Reagan and Bush protocol rule, which was: Women weren't allowed to wear slacks. And so we sort of changed that protocol right from the very beginning, accidentally. I don't think any of us realized there was a dress code that officially or unofficially discouraged or barred women from wearing slacks."

The no-pants rule was never rehabilitated, so after the recent dress code announcement, many feared the worst: nude pantyhose. When Bush press secretary Ari Fleischer eventually declared that "the [women's] pantsuits can stay," women outside the Amish community breathed a collective sigh of relief. He made it clear, however, that in this administration, West Wing women would be required to wear "appropriate business attire" and men would be expected to wear suits and ties at all times. The point, as one aide told the New York Times, was "to treat the office with respect."

The implication -- OK, it's pretty spelled out -- is, of course, that Clinton's staffers were not expected to be properly attired and that in fact they dressed in a manner that did not accord the office of the president the respect it deserves. Bush supporters have done their part to paint such a picture and have hailed the return of the dress code as a return to the halcyon days of order and discipline.

"Mr. Bush is restoring the dignity that used to be associated with the Presidency," wrote Tom Barrett on Christianlink.com. "Gone are the blue jeans, tie-dyes, T-shirts and jogging shorts that were considered appropriate attire during Clinton's Presidency."

"Out are the 20-something, denim-wearing, pony-tailed Clintonites known for strewing pizza boxes throughout the halls," wrote Joseph Curl of the Washington Times. "In are the 30- and 40-something, box-cut, scrubbed-clean, suit-and-tie-wearing Bushies."

The media has echoed this sentiment, or at least repeated it, pretty much uncritically. The New York Times referred to the "remarkable relaxation of the White House dress code" after Clinton's inauguration in 1993, saying that "aides frequently attended meetings in jeans and T-shirts."

It's all very evocative of the "no son of mine" longhair debates of yore -- debates that raged before some of us were out of diapers. But in fact it's grounded in pure fantasy -- one in which the Clinton White House resembles a Broadway revival of "Hair." Not surprisingly, former White House staffers find the suggestion that they dressed inappropriately or disrespectfully quite surprising, though not all that surprising.

Former press secretary Myers explained on "Nightline" that staffers in the Clinton White House wore suits Monday to Friday. "I think dress was a little more casual on the weekends, but there weren't people running around the West Wing in jeans during the workweek."

Eli Attie, who served as special assistant to the president in 1996 and 1997, and later moved on to be Al Gore's chief speechwriter, says, "I got glared at if I had a loosened tie in the West Wing." In fact, he says, after coming from a more relaxed environment on Capitol Hill, he was amazed by how seriously people took dress at the White House. "You had to be ready for business."

Of the "jeans and pizza boxes" image, Attie says, "If it was ever true, I never saw it. Around the Oval Office, people wore dark suits. In fact, Evelyn Lieberman, the deputy chief of staff, was notorious for upbraiding women for wearing too much makeup or for wearing their skirts too short."

This isn't the first time the allegedly slatternly dress of Clinton's staff has been blown up and paraded around as a metaphor for the moral lassitude of the previous administration. When former FBI director Gary Aldrich published his book "Unlimited Access" in 1996, he described Clinton advance men who looked like "bikers" and staffers who resembled hippies and said "one young lady was dressed entirely in black -- black pants, black T-shirt, black shoes, even black lipstick."

The abbreviated length of one staffer's skirt apparently made Aldrich "wonder if I'd walked into Hooters by mistake." (While here Aldrich sounds as if he has spent some time imagining what a Hooter's staffer might wear, it's obvious -- unless the staffer in question was wearing nude stockings, cutoff jean shorts and an owl T-shirt -- that Aldrich is engaging in a bit of dramatic hyperbole.)

Of course, what we're meant to take from such statements is that Clinton staffers were cheese-crazed animals in redneck-cum-hippie attire, while the Bush staff resembles a team of Bible salesmen traveling Kansas circa 1955. In fact, all the rhetoric about this newfound respect for the office, combined with the repeated ejaculations about the president's punctuality, could lead some to wonder whether members of the new administration have nothing more impressive to recommend them. (But then people who wonder about this sort of thing probably like to wear lederhosen and eat out of the trash.)

One young Bush staffer, however, remarks that, in reality, White House styles of dress have not changed drastically. Business attire is still required during the week, but the look relaxes on the weekends in this administration as well. The difference, she says, is that nobody wears jeans or T-shirts. "On the weekends, though, you could get away with leather pants." (Whoa, partner!)

If the White House has made a big deal out of this new "clean-cut" image, maybe it's because it's proud of keeping something clean. We're looking at wholesale pollution of the air and water, and our food is starting to seem kind of scary, but those Bushies sure are "well-scrubbed." Maybe now that Bush has rehabilitated the image of the man in the crew cut and short-sleeved button-down shirt, and life at the White House is a bit like a chirpy costume drama starring Robert Young as a former Fuller brush-selling Boy Scout who grew up to be president, we're supposed to feel better.

Of course, if the Bush administration really wants to reflect its values through its wardrobe, maybe it should try lamb's wool -- or whatever it is that wolves wear when they're trying to pass for sheep.