Why does every single story about Alex Rodriguez have to mention the Rangers star's salary? 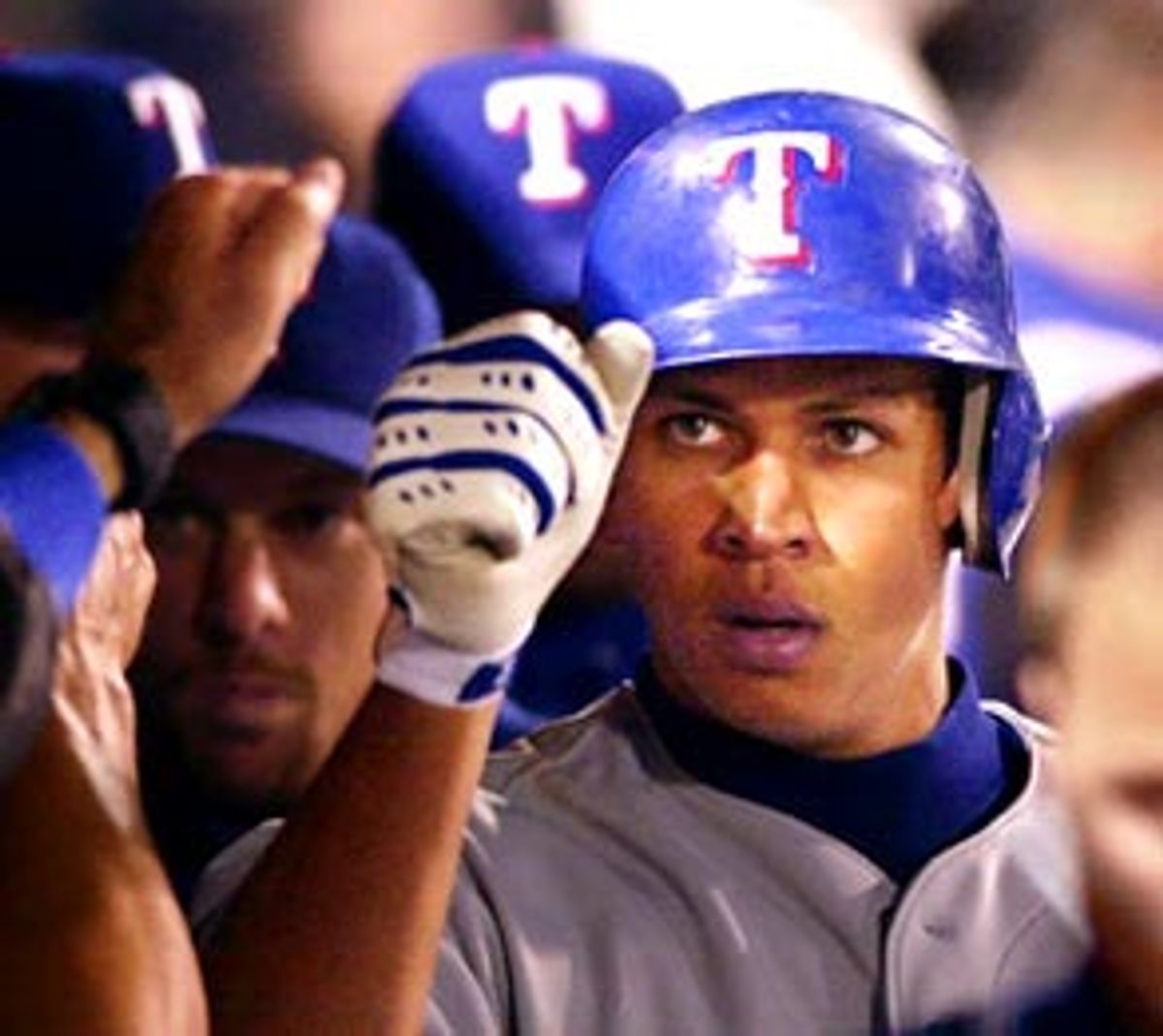 Write down this date: May 9. That's when it'll happen.

That's Tax Liberation Day -- you'll have to work from New Year's Day to that date to earn the money you'll pay in taxes next year, if you're in the United States and you're typical.

But that's not what I'm talking about. What I'm doing is making a fearless prediction: May 9 will be the first time you will read a story about Alex Rodriguez that doesn't mention his salary, which, in case you haven't heard, is $252 million over 10 years.

On Friday in Oakland, Calif., Rodriguez (who signed a $252 million, 10-year contract this off-season with the Texas Rangers) hit his first home run of the year. "Rodriguez hit a solo shot to center off Mike Magnante in the fourth," wrote the Associated Press. "'It was nice to get it out of the way,' said Rodriguez, who signed a 10-year deal with the Rangers in the off-season worth $252 million."

Here's the San Francisco Chronicle, on the same game: "The Rangers racked up eight runs against [Cory] Lidle, and later, the $252 Million Dollar Man, Alex Rodriguez, recorded his first homer with his new team, as Texas crushed Oakland 13-1, for the A's fifth loss in a row."

Also in the news over the weekend: Vice President Dick Cheney's income tax returns show he made $36 million last year. For A-Rod to make that much money -- his salary averages out to $25.2 million a year, or $155,555.56 a game -- he would have to play an extra 69 games and into the middle innings of a 70th.

And yet, somehow, I doubt every newspaper story that mentions Cheney in the coming months will include the words "Cheney, who made $36 million last year ..."

President Bush, by the way, made $894,880, nowhere near what either Cheney or Rodriguez pulled in, though both of them could argue, as Babe Ruth once did, that they "had a better year."

On Saturday, Rodriguez -- who will average $25.2 million a year for the next 10 years -- had an even bigger game, driving in six runs in another Rangers win. "The Oakland Athletics overcame an eight-run deficit but could not overcome baseball's highest-paid player," wrote the Sportsticker news service. "Signed to a 10-year, $252 million contract in the off-season, Rodriguez enjoyed his biggest game of the young campaign."

The Rangers swept the A's with another high-scoring win Sunday, thanks in no small part to Rodriguez, baseball's highest-paid player at $25.2 million a year. Here's the AP lead: "To Jason Giambi, Alex Rodriguez might be underpaid, even with his record $252 million contract.

"'He's pretty phenomenal,' the A's first baseman and last season's AL MVP said. 'We made him look like he's worth about $300 million.'"

(See, Giambi was referring to Rodriguez's $252 million contract there.)

Last month, regulatory filings showed that Bank One Corp. paid its CEO, Jamie Dimon, $29.8 million last year. Dimon worked for the company for eight months. A Nexis search Monday revealed that Dimon's name has appeared in stories in nine major newspapers on four different days since April 1. Not one of them mentioned his salary, which, prorated, is $44.7 million a year, or 77 percent higher than Rodriguez's salary -- $25.2 million a year, as you might know.

Want to know who's in Rodriguez's low-rent neighborhood? Keanu Reeves ($25.5 million), the Dixie Chicks ($25 million, though they have to split it three ways, presumably) and Rosie O'Donnell ($25 million). I can't remember the last time I read about any of these people's salaries.

Alex Rodriguez is baseball's highest paid player. For now. Can we all please get over it? He's widely considered the top performer in an unbelievably lucrative profession. He makes what the market will bear, and the market will bear a whole big swingin' heck of a lot right now.

Two hundred fifty-two million dollars over 10 years to be exact. Now shut up about it already.