Dragged back into the fight

As the confrontation between Israel and the Palestinians threatens to engulf the region, the Bush administration is no longer able to stay on the sidelines. 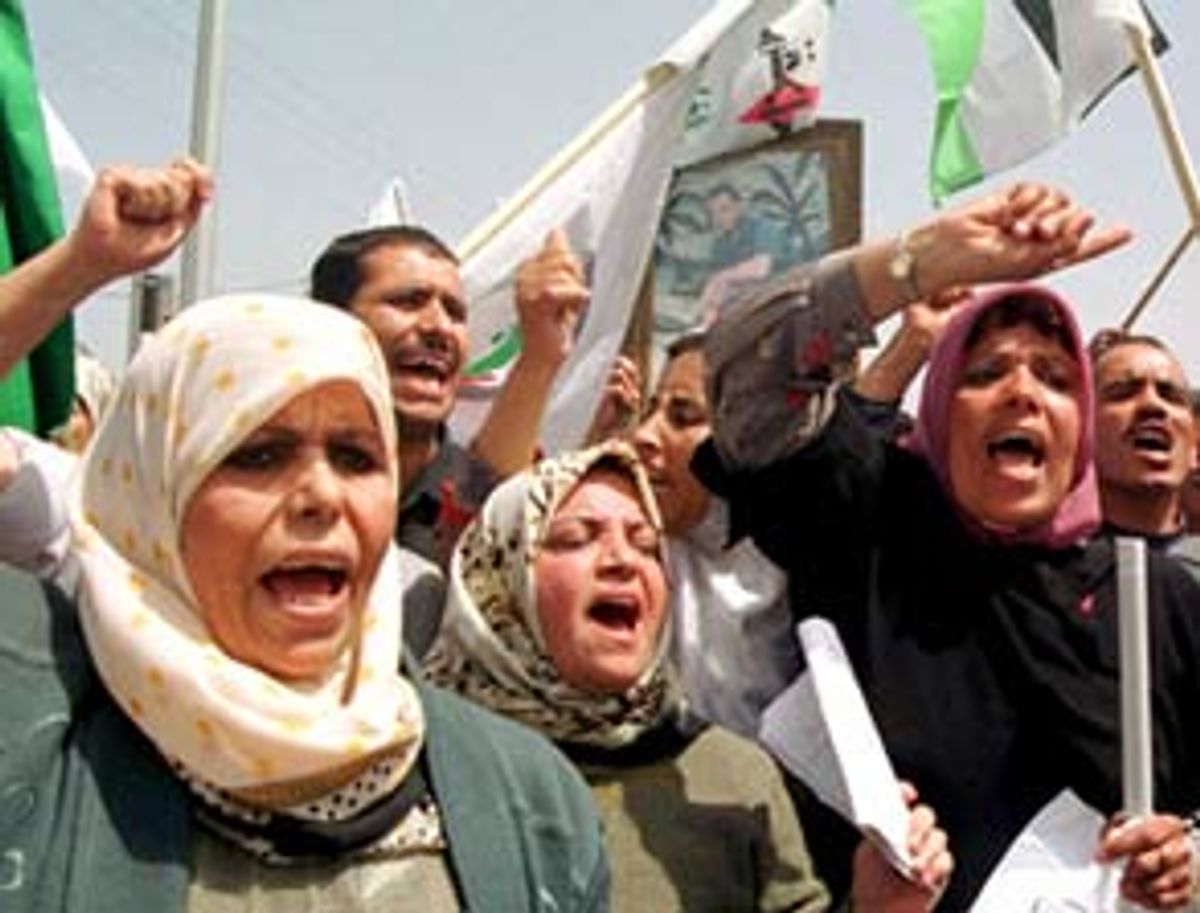 The statement put the U.S. back into an all too familiar role: that of a stern parent dealing with feuding siblings. Powell blamed the Arabs for the flare-up of violence, saying "The hostilities last night in Gaza were precipitated by the provocative Palestinian mortar attacks on Israel," but also had harsh words for Israel. "There can be no military solution to this conflict," said Powell pointedly. The remarks were carefully designed to admonish both parties without alienating either, but the brunt of disapproval clearly fell on Israel.

Israel swiftly backed off after Powell's comments, withdrawing troops and armor from a square mile of the Gaza Strip that Brig. Gen. Yair Naveh earlier said could remain occupied for "days, weeks and months" to block mortar attacks on Israeli settlements in the Strip and on Israel itself. (Some of the mortar shells fell near the farm of Israeli Prime Minister Ariel Sharon Monday.) An Israeli diplomat in Washington denied that Powell's statement had influenced the pullout, insisting that the order to withdraw from Gaza had been issued by 6:30 a.m. Washington time, long before Powell spoke. The denial was met with widespread skepticism.

The Bush administration never wanted to play this role. It tried to set a new tone in January, when Powell announced that the U.S. would engage with Israel and the Palestinians in the larger context of relations with the region (translation: shoring up alliances with our Gulf War allies), rather than acting as a hands-on referee in their conflict, as Clinton had done. In fact, Powell's team tried briefly to outlaw the term "peace process" at the State Department, saying it had only helped to drag out negotiations -- an approach that lasted about a week.

Bush's team had hoped to remain on the sidelines until the Israelis and Palestinians either came to their senses or beat each other senseless -- or both. But a much-feared third scenario has begun to take shape -- an expansion of the conflict into Lebanon and Syria, accompanied by Israeli re-occupation of Palestinian lands. As Powell said in his statement, "The situation is threatening to escalate further, posing the risk of a broader conflict." Now the Bush administration's options are few and grim: Its immediate goal is to simply contain the violence.

Over Easter weekend, Hezbollah guerrillas attacked and killed an Israeli soldier on the Lebanon border, and there were also mortar attacks in and near the Gaza Strip claimed by the militant Islamic Hamas group. Israel responded with airstrikes on a Syrian radar outpost inside Lebanon that killed three Syrian soldiers and massive naval, tank and helicopter attacks on Palestinian security bases that killed one person and injured over 30.

Above all, the violent events since Saturday have raised the specter of the wider, two-front war predicted by many analysts since the El Aksa Intifadah erupted Sept. 29 and the 8-year-old Oslo peace process utterly collapsed.

The Syrians have issued threats and mounted demonstrations, but have not yet responded militarily to the first Israeli offensive against their troops in Lebanon since 1996. It's clear they have no desire to meet the vastly more powerful Israeli army on the battlefield -- an encounter likely to be as costly and humiliating as earlier ones. The situation is a major test of the leadership of new Syrian leader Beshar Assad, who rose to power after the death of his father, longtime strongman Hafez Assad.

The events also are a test of Sharon's willingness to use force -- his favorite form of diplomacy -- to cope with the current downturn in Israeli-Arab relations. Sharon is still hated by Arabs and by many Israelis for his invasion of Lebanon while defense minister in 1982. He drove the PLO away to Tunisia for a decade but left Israel with a lawless, guerrilla-infested northern frontier and an 18-year quagmire that lasted until last summer. While he was a Likud Party hawk in the opposition, it was easy for him to castigate former Prime Minister Ehud Barak's Labor coalition as wimps, unwilling to crack down harshly on the Palestinians and the Syrians for allowing militants to hide behind their skirts and then launch attacks on Israelis. Now, however, he is learning that while Washington seems prepared to countenance his tough talk, tough action may be another matter.

But Sharon did not exactly cave at the first sign of U.S. displeasure. On Wednesday, his troops reentered Gaza to destroy more sniper and mortar nests, a sign that he remains committed to meeting force with force.

Sharon thus aims to conquer three battlefields at once. He must win Israeli support at home for escalating the military game of chicken with Palestinian leader Yasser Arafat and Syrian leader Assad, forcing them to rein in militants and terrorists. He must intimidate Arafat and Assad enough to win their help in controlling violence, without alienating Egypt and Jordan, moderate Arab states that are at peace with Israel. And lastly, he must mobilize supporters of Israel in the U.S. to gain American support for his tough military diplomacy.

Until now, Sharon may have thought he had American approval of his hard-line strategy and his refusal to negotiate until violence ended. President Bush's decision to receive Sharon at the White House but turn a cold shoulder to Arafat -- who was the most frequent foreign guest in Bill Clinton's White House -- was seen as a staunchly pro-Israel and pro-Sharon tilt.

This surprised some analysts, who had expected the Bush administration to be harder on Sharon and Israel, given the big oil background of Bush and several of his Cabinet members and the Republican record of being friendlier with Arab states than the Democrats, who draw more Jewish voters. In fact, the administration seems to be making up its policy as it goes along, reacting to the conflict rather than getting out in front of it -- a sharp contrast from the Clinton administration's failed attempts to take a proactive role as peacemaker.

Ultimately, Bush's team has few options. The universal Arab support for Arafat stands in the way of attempts to strengthen American ties with the Gulf War coalition. Moderate Arab states have privately indicated to Powell that they support the American position against Iraq, but none of them are willing to repudiate the Palestinian cause. Indeed, Saddam Hussein's hyperbolic statements of solidarity with the Palestinians, and moderate Arabs' anger at the United States' perceived pro-Israel tilt, have weakened the Gulf War coalition.

Powell's comments reflect the Bush administration's attempt to walk a delicate tightrope. "We call upon both sides," Powell said, "to respect the agreements they've signed. For the Palestinians, this includes implementing their commitment to renounce terrorism and violence, to exercise control over all elements of the PLO and the Palestinian Authority, and to discipline violators. For the Israelis, this includes respecting their commitment to withdraw from Gaza according to the terms of the agreements signed by Israel and the Palestinians."

But so far Arab hard-liners are refusing to stop attacks long enough to meet Sharon's demands for a breather from violence before restarting negotiations. And in the current climate it's doubtful talks could produce any progress, given the death grip the Israelis and Palestinians have on each other. The election of hawk Sharon was a mandate, virtually an instruction, from an exhausted and disillusioned electorate to use force. Each side thinks that if it can cause enough pain the other will cry "uncle."

Powell's remark that force cannot resolve the current situation is true, but as long as neither Sharon nor the militants of Hamas and Hezbollah appear to be convinced of it, it's irrelevant. What is needed in the region is enlightened leadership that can take risks for peace -- leaders like Anwar Sadat, the slain Egyptian president who boldly made peace with Israel in 1979. Foreign Minister Shimon Peres could play that role on the Israeli side if he could find someone to meet him on the other. In the meantime, the Bush administration has been forced to its feet from the bench on the sidelines.

Powell's task is daunting. He and his assistant secretary of state to the Middle East, Ned Walker, will have to cajole and convince the frontline Arab states that they have too much to lose by getting involved in the Israeli-Palestinian conflict. His statement rebuking Israel will help, as will the stature he gained after his admirably cool performance helped win the release of 24 American flyers from China. But the road ahead is long and difficult, and it's hard to imagine that the United States -- like it or not -- will not be forced to play a central role.