Her sexy clothes make merciless fun of sex. She's naughty, dresses like a kitschy rock Muppet and remembers when fashion had a sense of humor. 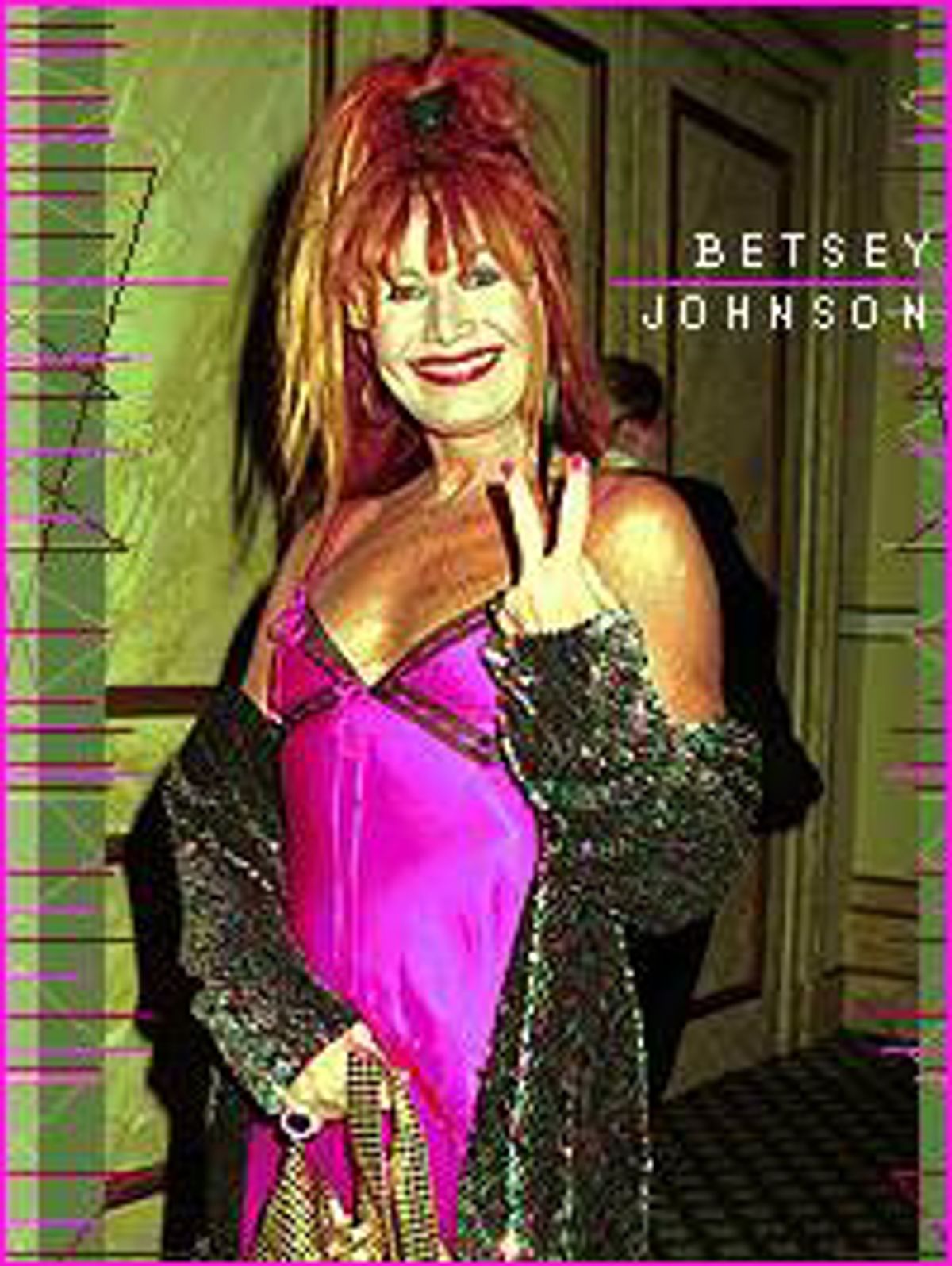 Betsey Johnson should be retired and preserved in an amber pantheon of style nostalgia. She should be attending her own nail-in-the-coffin commemoration at the Met, or playing the couture grande dame like Karl Lagerfeld. She should be swathed in black and fanning herself inscrutably behind a pair of enormous eyeshades.

Instead, she is jumping around in bangs and fishnets and corsets, cavorting with Playboy bunnies and bikers and rock stars. At 59, she still dresses like a kitschy rock Muppet and paints her long nails blue. She doesn't so much pose for photos as she contorts for them, feigning gleeful insanity. In photos, her daughter, Lulu, often stands by looking neat, poised and indulgent as Mom crouches like a toddler and fans out her hair extensions as far as they'll go. Her smile is enormous. When she laughs, her mouth eats her face.

When the Council of Fashion Designers presented Johnson with the Timeless Talent Award in 1999, it wasn't kidding. Johnson is the Mick Jagger of fashion. She used to turn cartwheels down the runway at the finales of her fall and spring shows, tutus and braids flying. The New York Observer's Simon Doonan called her a "cartwheeling kook" just two months ago, so presumably she's still acrobatic. Doonan also called her "the only person smart enough to allow her runway models to behave the way they behave backstage, i.e., naughty and excitable." She herself is naughty and excitable and busy. She has more than 40 stores worldwide and designs two collections a year. The tags on her clothing feature doodles and snapshots of her various alter egos and little handwritten notes telling you to have a nice day. Her publicist, who answers the phone "Hello?" says people have been waiting since January to speak with her. She may be able to get back to me in the fall. The publicist sounds weary and beleaguered. Why won't people leave her alone? Betsey is our good friend but she doesn't have time to tell everyone her life story. Anyway, her life story is preserved in an amber pantheon of rock nostalgia. Even if you haven't heard it before, you've heard it before.

It is, in general, a pretty good story, and can be sketched out in a few broad strokes. She lived in the Chelsea Hotel in the late '60s. Edie Sedgwick was her house model. She became a friend-of-Andy. She designed the costumes for "Ciao, Manhattan." She made velvet suits for the Velvet Underground. She made Lou Reed's pants too big in the crotch, provoking his anger. She married John Cale, making matters worse. She shocked the fashion establishment. She hung out at Max's Kansas City. She shocked the fashion establishment at Max's Kansas City. She played Yoko Ono to Lou Reed's Paul. She broke up the Velvet Underground.

So maybe a lot of people had the same story back then, or were part of the same story, or else the '60s were like a really small town. But Betsey Johnson was to rock what Vivienne Westwood was to punk 10 years later. Or rock was to her what punk was to Vivienne Westwood. Either way, Johnson lived the dream life of rock stars and continues to dress the part. Why shouldn't she? She designed the costumes. As one longtime employee says, "You never see her not looking a certain way. She is always a doll. A living doll."

Not long ago, Johnson was lying in bed in her storied Manhattan penthouse, gazing at her enormous, illuminated closet, whimsically asking herself, "What do I want?"

The answer turned out to be "Betsey's Closet." It was the name of her fall 2001 collection and one of her company's biggest smashes ever. "I cloned myself," Johnson said, describing the retrospective, in which the models were styled to look like her -- with her flopsy, streaky hair and lightning bolt tattoos just above the heart -- and instructed to flounce and prance like her. They wore tutus, corsets, bubble satin minis, velveteen knicker suits, teddies, bloomers, crinolines and other garments perfect for running away from a French Quarter brothel to join the circus, or the other way around.

Betsey Johnson has always worked outside of fashion. In fact, fashion considers her a minor figure. Nobody refers to the Johnson "house," or uses her name as a status adjective to elicit envy, wonder or self-loathing from those who can't afford to keep up. A woman wearing Prada-Gucci-Armani makes you wonder how she got there and why you didn't. A woman wearing Betsey Johnson reminds you not to care. Johnson is a girl fetishist. She designs clothes for the ironic vamp, the tongue-in-cheek tramp, the rock 'n' roll kinder-whore and the self-parodying sexpot. She helps prom-goers and bridesmaids sheathe themselves in quotes. Her clothes are sexy because they make merciless fun of sex. Johnson still remembers when clothes had a sense of humor.

Of course she attended art school. And like the heroine of many a midcentury first novel, her professional life was launched by a magazine contest. The prize was a guest editorship at Mademoiselle and a trip to London in 1964. She returned to New York, a 21-year-old "youthquaker" in an "Englandy" frame of mind, and got a job designing for U.K. retailer Paul Young's shop, Paraphernalia. The shop employed salesgirls who lounged around smoking pot, reading magazines and listening to the Rolling Stones of their own volition. (This was before retailers sent corporate mixed tapes to their stores, before they invented lifestyles and lifestyle soundtracks.) Johnson met John Cale at a Paraphernalia fashion show when she was dating another Velvet, Sterling Morrison. "It seemed to me we knew all the same people," Cale later wrote in his autobiography, "What's Welsh for Zen." "It was a match made in heaven." When they decided to get married, the Ladies Home Journal offered to pay for the wedding. Magazines "were very much interested in us freaks then," Johnson recalled. Nowadays, magazines mint "freaks" daily.

In the early '70s, commercial designers began to annex eclecticism. Johnson left both Paraphernalia and Cale. She opened a shop called Betsey Bunky Nini and was hired as the designer for the label Alley Cat. In 1971, she became the youngest designer ever to win the Coty Award. It was an honor but not a very good sign. Youth was quaking less and working more. "In the '70s my girl moved up to work and dress-for-work clothes, and my customer disappeared," Johnson lamented.

Her customer reappeared, this time as a punk rocker, in 1978, three years after the birth of her daughter. "All of a sudden in the late '70s there were the English and punk and the CBGBs," she told the Times. "That kind of youth thing came in again, so I thought maybe it's my time again." Once again, Johnson returned to the music scene for inspiration and support and, with partner Chantal Bacon, opened the first Betsey Johnson store in New York. The '80s spawned a procession of ever more flamboyant and theatrical subterranean styles, all of which made room for her on the bandwagon. By 1999, Johnson and Bacon had opened 26 stores. By 2001, they had opened 14 more. Either the cult of Betsey Johnson exploded, or the Betsey Johnson brand was perfectly positioned to capture today's "tween" market. Johnson may still hang out with her friends from her Velvet Underground days, but, for the most part, her clients wear her clothes to see Britney Spears.

And this part of the story sounds familiar, too. Even if you haven't heard it before, you've heard it before. Once-rebellious youthquaker grows up, becomes a single mom, stays true to herself, launches women-oriented company, "celebrates every day," gets breast implants, removes breast implants, cavorts with Playboy bunnies, survives breast cancer, becomes a brand. As one longtime employee says, "Betsey is the best marketing tools the company has."