Hollywood cranks out an all-new monster -- a mutant amalgamation of other, better summer movies. 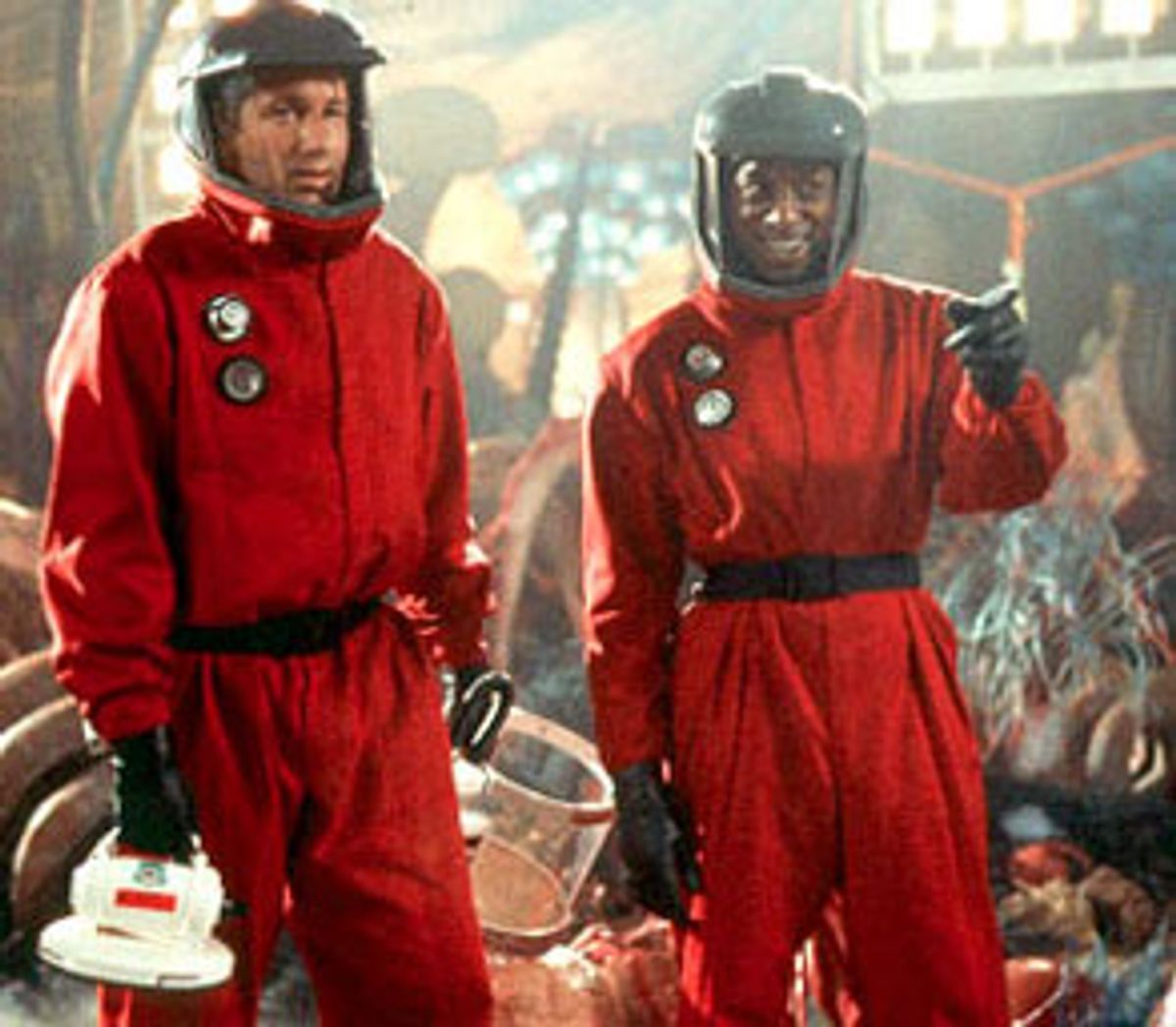 "Evolution" proceeds at such an amiable pace and features enough creepy-crawly effects that many viewers won't quite notice or care how rickety and second-rate it is. As the conclusion to a sunburned afternoon, this loosey-goosey alien-attack shtickfest makes perfectly acceptable entertainment. But it's not much more than fragments of other, somewhat better summer entertainments stitched together and whitewashed in the slapdash nonstyle of director Ivan Reitman. (I know, I know, he made "Ghostbusters." But name another Reitman film with even half as much personality.)

We've got David Duchovny and Orlando Jones doing a vaguely hip Dean Martin-and-Jerry Lewis impression as third-rate community college professors who discover a meteorite crawling with alien spooge in the Arizona desert. We've got Seann William Scott, one of the finer practitioners of dudely acting in the field today, as a clueless wannabe firefighter who "helps" the two protagonists. We've got Julianne Moore as a prissy scientist who tells Ira (Duchovny), when they think they're doomed, "I would have rocked your world."

We've got fat guys who love to party, and who know where selenium can be found in large quantities on short notice. We've got lots and lots of stuff from other movies: dinosaurs in the mall ("The Lost World: Jurassic Park"), a biracial team of wisecrackers fighting ugly-cute mutant aliens ("Men in Black"), plucky earthlings battling a superior force ("Independence Day") and a crew of rapscallions conquering evil with unexpected household products ("Ghostbusters"). We've also got a script (by David Diamond, David Weissman and Don Jakoby) that feels like it was cranked out to meet a deadline, with way too many gags that fall flat and a general sense that everybody involved had a great time hanging out and couldn't be bothered to stick around and clean up.

For the first few minutes of "Evolution" I wondered whether there was a script at all; Duchovny and Jones shuffle through a couple of early scenes on their pseudo-Rat Pack charm, as if Reitman hadn't told them what to do. Ira is a biology prof on cruise control, so much so that in the one class we witness he seems to be teaching the periodic table (which in my school days was chemistry rather than biology). We eventually learn that he has a past as ... a government secret agent! The writers evidently intend this revelation to seem pithy and ironic, but like so much of this movie it's only botched and obvious. Ira's pal Harry (Jones, who may finally have outgrown his 7-Up pitchman celebrity) teaches geology and coaches women's volleyball, but sees a path to advancement in his unpaid gig as local representative of the "United States Geological Society."

Bluffing their way past the cops into the meteor cave -- "The 'USGS' and local law enforcement have a long history of cooperation," Harry says in authoritative tones -- Ira and Harry discover that the extraterrestrial goo is alive and rapidly metamorphosing into higher life forms. "Is the Nobel Prize paid in installments?" Harry wonders. "I'm not getting ahead of myself; I'm just concerned about the potential tax consequences."

Right about the time the goofy-looking arachnids and crustaceans give way to ferocious reptiles who colonize the sewer system and a golf course and then threaten to conquer the entire state, the government moves in. This means the cute but klutzy scientist, Allison (Moore), and it also means Gen. Woodman (Ted Levine), who has the tight lips and thin mustache of a Movie Villain. I can only assume that his cartoon-nefarious quality is also meant to be ironic, but "Evolution" is so unsubtly handled you just can't be sure.

Things pick up from this point onward, as Ira, Harry and tag-along Wayne (Scott), the meteor's original discoverer, take on feds and aliens both in a series of implausible comedy-action sequences. I found "Evolution" most enjoyable at its most irrelevant, when these guys are simply a trio of schmoes sitting around a bad diner listening to Muzak and planning to pick up chicks and kick ass, but ultimately Reitman's agenda is more predictable (and more hyperactive) than that. The pterodactyl-in-the-mall scene is certainly a classic of its kind, and so, I suppose, is the emergency rectal surgery Harry must undergo. (As he observes, in this kind of movie the black dude usually dies first; in this case, he is only subjected to endless humiliation.)

Despite Duchovny's top billing, he doesn't get much out of his jocular, relaxed, not-quite-George Clooney persona here; it's Jones, always moving, always exercising a tic or twitch in his shoulders, always halfway through a self-justifying monologue, who commands the screen. Personally, I find Scott's beaming, ultraconfident surfer-boy demeanor irresistible, but that's my problem, and Wayne is basically the same character he played in "American Pie," "Final Destination" and "Road Trip." Moore comes and goes too quickly to make an impression, and so much time is spent establishing her clumsiness that I assume it was originally intended to figure in the plot. (It doesn't.)

A lot of "Evolution" is like that: Things that seem like they might be significant, or at least funny, just aren't. Dan Aykroyd shows up in a cameo role as the governor and is pretty much a bore. I kept thinking that the alien critters might evolve into something surprising or interesting -- bikini babes, enlightened superbeings, Emeril Lagasse clones, masked Mexican wrestlers. But no, they're scary monsters that totally want to kick our ass, and that's it. The scene in which Ira, Harry and Wayne, apropos of nothing, cruise down a dirt road in their Jeep boogieing to "Play That Funky Music" is, on one level, idiotic. On another it makes perfect sense: "Evolution" has finally gotten so perfunctory, so sick of itself, that it's taking a break to crank a gnarly '70s groove. Add a tequila sunrise and you'll feel a lot better about the whole thing.