Revenge of the file-sharing masses!

By smashing Napster, the music industry has pushed its customers to seek alternatives that won't be so easy to shut down. 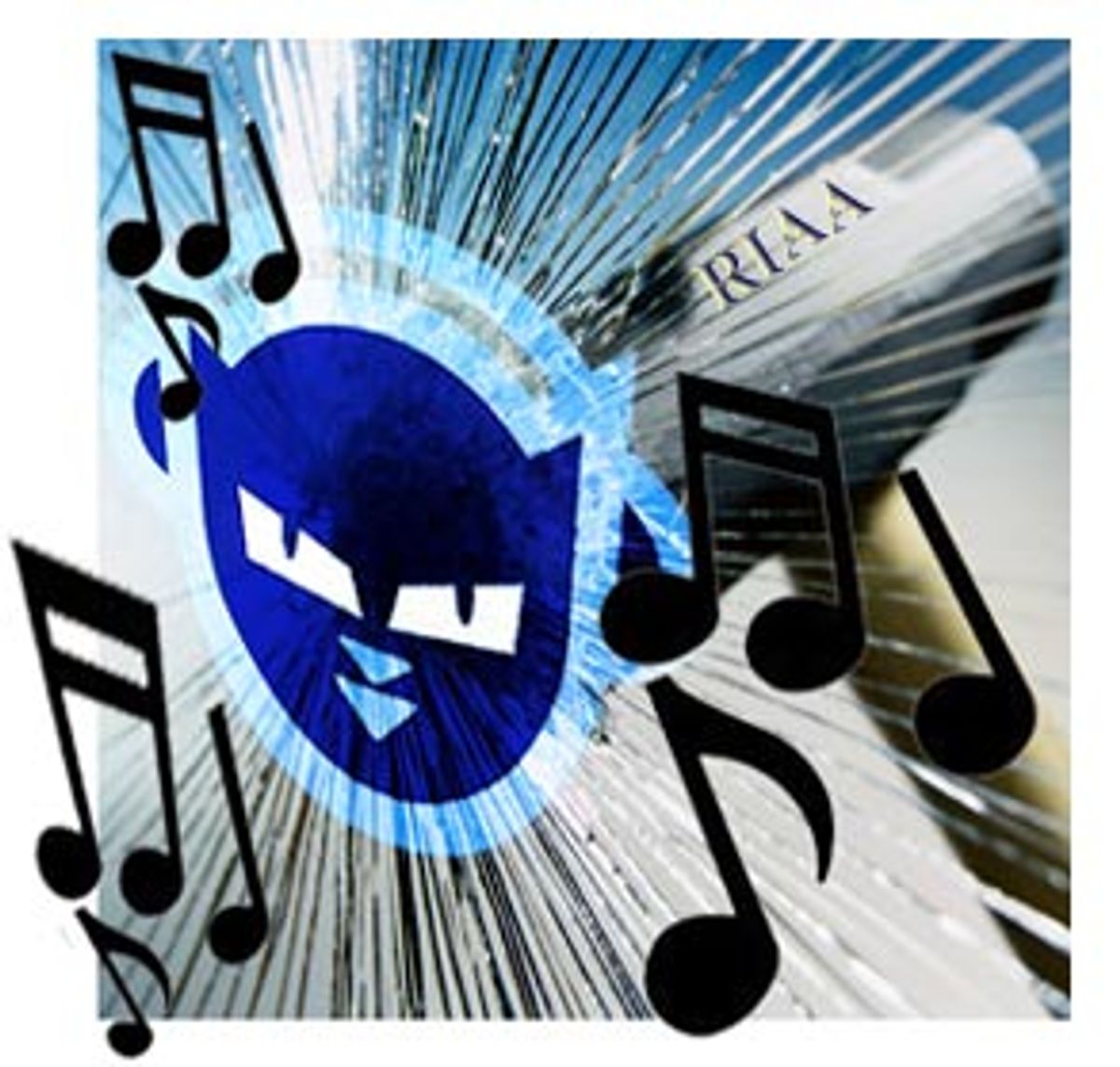 It's now nearly three weeks that Napster has been out of commission. The music file-sharing service had already seen some drop-off in usage as it tried to tighten up controls on the trading of song files that record companies had specifically requested be barred. But at the beginning of July, Napster announced that it was going offline for some "technical upgrades." It remained out of commission as the judge presiding over the case brought against it by the RIAA, the recording industry trade association, decreed that it cannot open its doors until it has achieved 100 percent effectiveness at banning copyrighted files. (The company says it can only promise 99 percent and change.) On Wednesday, an appeals court reversed that order, but as I write, the service remains down.

Given the size of Napster, this may well constitute the largest service outage ever in online history. But those millions of Napster users aren't just sitting on their hands: They're spreading out across the Net. They're picking and choosing among the myriad new "peer-to-peer" file-trading offerings that have sprung up in Napster's wake. They may be excited by the new wrinkles the developers of these new services have devised; they may be frustrated by the limitations they encounter. Either way, they're still swapping files.

It's this year's mass Net movement: the Napster diaspora. As predicted, the crackdown on Napster is now leading directly to the widespread adoption of alternatives that are less legally and technically vulnerable to the kind of attack that has hamstrung Napster.

This ought to be keeping the RIAA awake at night.

Napster always had two basic assets: First was the simple idea (one that had been around for a while -- Hotline was a key predecessor) of sharing portions of users' file collections and making those files easily searchable. The power of that idea, and the simplicity with which Napster executed it, allowed Napster to amass its second asset -- a vast base of users, whose sum total of files represented by far the largest widely accessible library of music ever assembled.

In the wake of the legal assault upon Napster, both of those assets are in jeopardy: The idea of sharing music files now belongs to dozens of companies, independent developers and fans, who will carry on with it regardless of the fate of Napster Inc. And no one knows whether Napster's millions of users will return to it when it reopens its doors in its new incarnation -- as a for-pay service allowing the transfer of only those files owned by participating companies, in a new proprietary ".nap" format rather than the popular MP3.

In an e-mail sent to users who volunteered to test the new versions, Napster admitted, "We expect that Napster will start small and grow, just as it did when Shawn [Fanning] first released it 2 years ago." But that new-model Napster will be competing with a long list of alternative services -- a welter of commercial and not-for-profit enterprises, grass-roots technologies and renegade Web sites, all offering Napster-like services in new configurations.

The list begins with the fabled Gnutella protocol -- conceived and released into the wild by renegade programmers employed by AOL. It has been steadily improved from its rudimentary origins; today, popular programs like BearShare and LimeWire provide mostly painless access to a multitude of files across Gnutella-style networks.

Meanwhile, both KaZaA and Music City's Morpheus share a similar technology from a European company named FastTrack. Their version of peer-to-peer file sharing features a particularly well developed approach to "metadata" -- extra information tagged to each file that enables users to target searches better and find out more about files before downloading them.

Out of Texas comes Audiogalaxy, a service that lets you conduct your music searches in your Web browser and then shunts your downloads to a nifty helper application. The OpenNap project makes it possible to run Napster-like servers while bypassing the "official" Napster network; WinMX is a popular client for OpenNap servers. Aimster adopts the instant-messaging model as a basis for organizing file sharing; the Freenet project places its emphasis on anonymity to help protect freedom of expression by dissidents under repressive regimes. Direct Connect provides service based on how many files you contribute to the network; eDonkey2000 is favored by traders of movie files; Mojo Nation builds a credit/debit marketplace into its system.

Some of these projects take an openly hostile stance toward the music industry (the Aimster home page boasts a pistol-packing blond over the words "Take AIM at the RIAA"); others are more corporate-friendly and boast of their compatibility with various intellectual-property protection (or "digital rights management") schemes. Some work beautifully some of the time and then mysteriously fail or go offline; most are in various stages of "beta" development and frequently issuing new upgrades and patches. In the days following the Napster outage many of them experienced a sudden influx of new users and a resulting strain on their networks.

In my informal sampling of a half-dozen services, none of them offered as unbelievably complete and deep a selection of popular and obscure music as Napster did at its zenith. On the other hand, many did offer just as compelling an experience as Napster did when I first started using it a year and a half ago.

That puts them in a different class from the much-ballyhooed and still-nascent new online music services being hatched by the music industry itself. These yet-to-be-unveiled entrants in the field -- including MusicNet, Pressplay and FullAudio -- are all promising variations on the same theme: subscription-based access to large catalogs of music files, all treated with a variety of copyright-protection schemes. And they share a common set of Achilles' heels: First, experience suggests that most copyright-protection schemes tend to be clumsy and annoying and turn off users (and we won't know whether these services have avoided that problem until they open their doors). Second, it remains to be seen whether these "official" offerings can or would provide the kind of oddball tracks, bootleg live recordings and rarities that attract so many diehard fans to file sharing in the first place.

Finally, and most important, these services -- as spawn of the music industry itself -- are organized around labels, and that means that their offerings are likely to be incomplete. Unless the music industry can get its act together with comprehensive cross-licensing to provide the entire recorded catalog of music on multiple competing services, the consumer will be in the ridiculous position of having to remember which label a particular artist is carried by in order to find that artist's work on one or another of the "official" services. Which just gives the general public another reason to ignore these offerings and stick with the range of Napster alternatives that are already being embraced.

How big is the Napster diaspora likely to be -- and how long can it last? Clearly, few of the new technologies and services are likely to grow to the proportions of the pre-RIAA-lawsuit Napster; in fact, no more than a handful will probably survive. This type of software has now entered the "explosion and differentiation" part of the development cycle of any Internet innovation -- the part where a plethora of competitive alternatives arise, and the online public, employing the power of networked word of mouth and voting with its feet, determines which is the best. All that's different with the post-Napster crowd is that, in addition to the usual criteria by which the competition's winner will be judged -- reliability, low cost, features and so on -- there's a new category in which the survivors will have to excel: How well are they protected from legal assault?

Some will be vulnerable to the same kind of lawsuit that has hobbled Napster, but many others will not, and the harder the RIAA pushes the legal strategy, the more it will push the public -- and the developers -- toward the decentralized, noncommercial alternatives, those best inoculated against legal suppression. When that happens, the music industry will face the ultimate disaster toward which it has been heading ever since it decided to take Napster to court: To enforce its copyrights, it will need to take legal action against the hundreds, thousands or millions of individuals who have taken up file sharing with alacrity -- individuals formerly known as customers. Down that impractical road lies only commercial suicide.

It didn't have to be this way, of course. The music industry has had the opportunity for several years now to begin offering reasonably priced access to comprehensive catalogs of digital music across the Internet, sweetened with special premium additions for fans willing to pay even more. Such a service could satisfy the hunger of millions of people for ready access to new and old music while preserving a reasonable income for the artists who make that music. Fear has stayed the industry's hand -- fear that today's unconscionably high CD prices can't be sustained; fear that the many layers of middlemen in today's industry might find themselves out of jobs; fear that the superstar system couldn't survive such a change; fear of the unknown.

The industry's paralysis is a tragedy for anyone who believes that artists should be compensated for their work as well as for anyone who loves music, period. But it's clear that the record labels would rather sue than find a sensible rapprochement with the new world of digital distribution.

To date, though, all their legal strategy has accomplished is to radicalize the community of online music fans and accelerate the process of technological change. Meanwhile, though Napster use is way down this year, it seems that music sales are, too.

Gee, could there be any connection there?