Turn on the news! 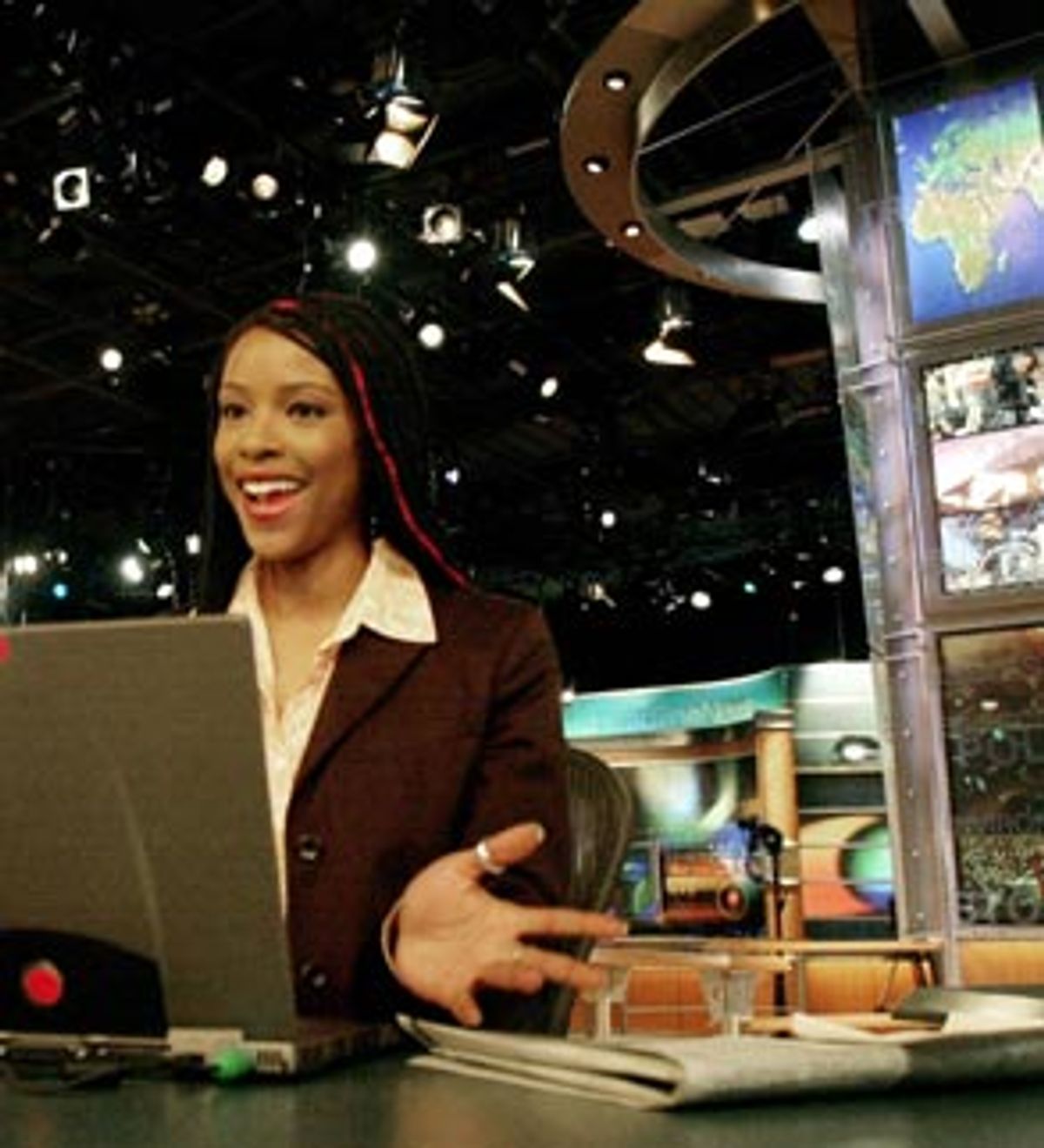 I am enthralled by CNN Headline News' younger, zingier, zestier, incredibly stressful new format. It's so speedy, it makes "The Weakest Link" look like C-Span on NyQuil. Or maybe enthralled isn't the right word. I'm hypnotized by it. Stunned into a state of head-throbbing, catatonic submission, iced with a creeping sense of inadequacy. Within about two seconds of its introductory, World Music-style, ululating wail -- A-ah-aaaah! -- I'm pitched forward, banging the coffee table in search of a buzzer.

I feel that I am being tested for youth, vitality and the ability to digest dozens of slippery, writhing morsels -- panicked goldfish fighting for their tiny little lives -- of loosely related information. By the time anchor Larry Smith starts talking really, really fast, my blood pressure has reached escape velocity. News happens so fast! I can't keep up! I. Can't. Take. The. Pace!

CNN says it revamped the old Headline News in order to bring us "a newscast that's faster, with more news, and focused on what you need to know." And it certainly is fast. But who needs the MTV "Pop-Up Video"-style factoids that keep erupting on the screen making it impossible to -- is it even cool to complain about this? -- concentrate? Should it matter? I mean, in theory, I should be fine. I am, after all, part of the original MTV generation, among the first to vociferously demand my MTV, as I was told to.

That, however, was many long years ago. Now I'm just one year away from exile from the great demographic. I'm packing for my trip on the ice floe. (It doesn't seem fair, somehow, that I keep getting older while kids today just stay the same age.) Maybe Stone Phillips could investigate for "Dateline." I love that grimace-grunt thing he does when he's feeling empathetic. Cue sad music. Grrr.

But on Headline News, there is no sad music and no animatronic anchor. Or at least not that I've seen. This afternoon, anchor Larry Smith seemed to cower in a corner of the screen, looking every inch the afterthought in this parody of a Web site gone mad, as graphics, charts, grids, bleeps, buzzers and blinking lights encroached upon his already rather constricted screen space. My heart races and my palms sweat as I watch him valiantly try to sprint through his report on the fires in Montana without fumbling, while a nearby sidebar calmly pumps out "related" facts like plump, smug little sausages at the rate of two per second.

Larry is a trained professional! Should you, the hip, young viewer, try to so much as glance in the direction of said sidebar -- Did you know, incidentally, that the 2000 Cerro Grande fire destroyed 235 structures? Or that fire is the chemical reaction between a fuel and oxygen? -- you would miss the entire segment on Janet Reno. Headline News moves that fast. Will Reno's bid for governor will be "Reno-vated"? Gee. You know what? I don't know. I couldn't tell you.

My eyeballs wandered over to Tuesday's high temperatures for a nanosecond, and never made it back to Larry in time to find out. Now my "Reno-lated" curiosity is piqued, but Smith -- miles ahead of me -- has already started on a story about a woman who was thrown from a cruise ship by an un-medicated mental patient. Or something. As Smith announces that the woman's husband has confirmed in a statement that he is very angry, I spot a familiar-looking figure gesticulating soundlessly at a podium in a corner of the screen. Is it the angry husband? No, it's Sean "Puffy" Combs. What's he doing there? I have no idea. Do I have to say P. Diddy now? I think I have to lie down.

I switch away from Headline News to catch a few seconds of an "MSNBC Investigates" report called "United Flight 232: Ten Years Later." It's now two years after that, but it's still interesting how little things have changed in the world of newsmagazine reporting. The music on MSNBC is jarring and ominous, apparently taken from a horror movie soundtrack. Cameras zoom slowly into flowers as "the human spirit" is praised and somebody plinks away at the high notes on an old piano. I change the channel.

On Fox News, the latest on shark attacks. I think it's just terrible what these sharks are doing. But why do shark-graphics on TV always have those goofy overbites and funny wide eyes? Am I meant to laugh? Might my laughter be construed as an ode to the indomitable human spirit? Strangely enough, the shark attack music is identical to the plane crash music. It's the music of things gone horribly wrong; it's music that newsmagazines, as a genre, can relate to. It's their theme song.

Which brings me to my central question: How does one parody a newsmagazine when the genre itself does such a good job of it already? "The Daily Show with Jon Stewart" has been managing nicely. After the New York Times reported that nearly as many people watched its coverage of the election as watched what the Times called the "real" news on Fox, Stewart reminded viewers that the show was not, in fact, an actual news show. There was a slight aggrieved tone in his voice as he did. I'd be offended too; "The Daily Show" is much too honest to be lumped in with normal news programs.

On Wednesday night, Comedy Central will air "Mo Rocca's Back to School Special," a collection of some of Rocca's best, most delightfully inane investigative pieces from "The Daily Show," all playfully stuffed into an unrelated back-to-school format. Fans of "The Daily Show" know Rocca as the non-threatening correspondent with the amusing speech defect who enthusiastically tackles a certain species of human-interest story just past the bounds of those favored by the typical, unintentionally hilarious local news correspondent.

Perhaps without the sardonic eyebrows of Jon Stewart to play the straight man, Rocca is at a slight disadvantage: The on-campus sections of the special are merely an exercise in unabashed silliness -- making the show even harder to distinguish from, say, "Dateline." But if the Rocca-as-freshman bits are, like grandma, giddy and a little toothless, at least three of the five on-the-spot reports are worth Headline News anchor Andrea Thompson's weight in Emmys.

Lisping and wide-eyed, Rocca strolls around the campus of Drew University in New Jersey, dressed in a Varsity sweater, Oxford shoes and a propeller beanie cap, singing a back-to-school song about sexual harassment, bulimia and binge drinking. He gets stood up in the student union and paddled by a frat boy. He hangs a poster of Gustav Klimt's "The Kiss" in his dorm room ("No one will have this," he enthuses) and pickets the administration office. ("Norway out of Ecuador now!")

While these make for some cute Katie Couric/Matt Lauer-type moments, Rocca is at his funniest on location, when he gets the chance to ape the exaggerated pauses, faked reactions and inane questions of TV news correspondents.

In the special's first segment, Rocca interviews Ara Tripp, a "female who arrived at her femaleness in a very unorthodox manner" and became the first tower-climbing, topless, fire-breathing transsexual to accidentally knock out power to half of Seattle.

"There isn't any," Tripp replies in a tremulous falsetto. "And there oughta be."

But the local traffic reporter and fire chief disagree. Donning a yarmulke, Rocca then puts the burning question to a rabbi.

"Opposed to," says the rabbi.

"But tower-climbing, topless, fire-breathing transsexuals," Rocca concludes, "no Jew can do."

The rabbi beams in agreement.

This is finally some news I can use -- especially when dining out with friends who are still employed full time. The best part of the segment, of course, is the inspirational wrap-up, when Rocca and Tripp cuddle up on the couch and bring the segment to a close.

"And you're still breathing fire."

"As a woman," Tripp smiles.

"That says it all," Rocca intones. Then, "Or is there more?"

In another segment, Rocca visits Tannersville, Pa., a friendly town "nestled inside the Pocono Mountains." When a Friendly's Restaurant franchise opens in town, the Tastebud-Friendly Family Restaurant, a popular-yet-humble-yet-plucky local establishment, gets slapped with a cease and desist order on the use of the word "friendly" in its name. Soon, the Galan family, owners of the Tastebud Friendly Family Restaurant, are "forced to conceal their amiable adjective" with duct tape.

After interviewing the beleaguered owners of the newly-named Tastebud [Blank] Family Restaurant, Rocca goes off in search of possible future targets of Friendly's legal department -- among them, Tannersville residents Gary Friend and Dave Friendy.

"This is your library's main reading room?"

"In your mother's basement."

"So, how much smut are you hoarding in your mother's basement?"

"Does the sea of pornography ever distract you from your crocheting?" Rocca asks.

Rocca elicits amazing responses from everyone he meets, as it seems most of the people he talks to can't tell him apart from an actual correspondent. He has a way with the exaggerated pause and the furrowed brow, but most of all, people respond to the tone, the fake smile and that bizarre newscaster enunciation that exists nowhere else in nature. In a segment about the Reform Party Convention in Long Beach, Calif., Rocca approaches an elderly man in an Uncle Sam-style top hat and flatters him with a long question.

"Pat Buchanan's choice of Ezola Foster was calculated, very political. She's likely to bring along all the other black, female, retired typing teachers who support the flying of the Confederate flag, yes?"

Can you blame the man for being dazzled by a serious look and the thrust of a microphone?

And he didn't even have to get eaten by a shark to say it.