Even those college students who passionately support the U.S. war on terrorism aren't sure they want to die in it. 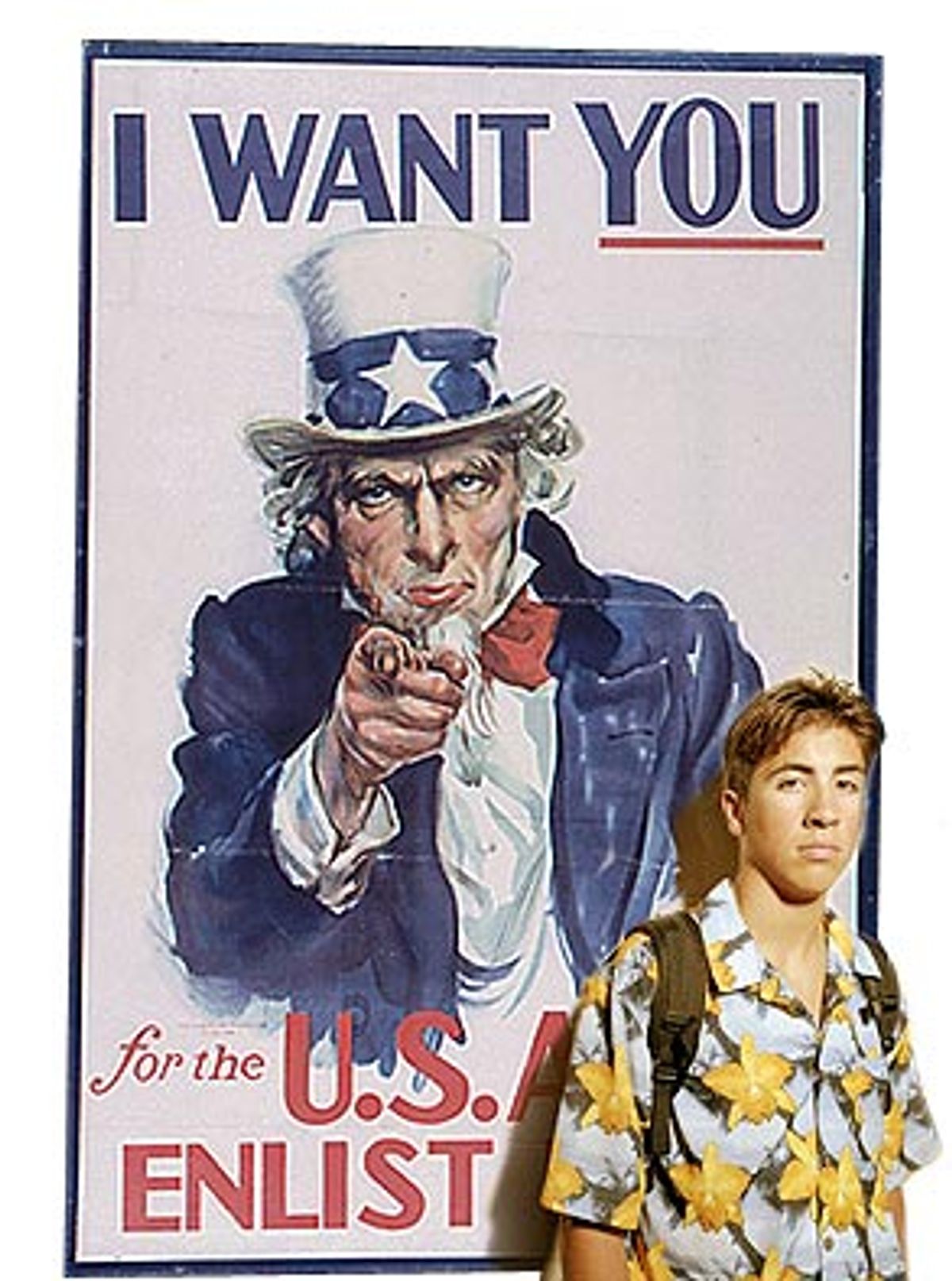 Will the terror offensive against America inspire a massive wave of young patriots to join the military? The Department of Defense reported that the number of recruitment queries doubled in the last week, but it will be at least a month until the military can determine whether those queries translated into actual enlistments. A random survey of fighting-age college students from San Francisco to St. Louis suggests that many young Americans remain reluctant to throw themselves into combat.

While they were shocked and angered by the attacks on high-profile American targets, a number of those interviewed expressed uncertainty about the exact nature of the military mission and the enemy American soldiers will be facing. Others, raised in a period of comfort and security during which U.S. military actions have been limited to high-tech air strikes, recoiled at the idea of bloody ground combat. Still others, educated in liberal classrooms on the works of U.S. government critics like Noam Chomsky, are suspicious of the Bush administration and its motives.

So far this year, the military has met its recruiting and retention goals -- for the first time in four years -- boasting some 75,800 new soldiers. Another 35,000 reservists have just been called up. It's possible we may never need to draft more soldiers to fight this war beyond those who have already volunteered. But if we do, and if, as in the past, all males between the ages of 18 and 26 would be eligible, and the lottery began with 20-year-olds, Canada should at least expect an influx of San Franciscans. On an overcast day in the main quad of San Francisco State University, nearly a week after the attacks on the World Trade Center, six out of a dozen San Francisco State University students polled by a reporter insisted that they would flee north if drafted.

Walking to their classes past the campus library, which is plastered with hand-painted posters proclaiming "Love is stronger than Hate" and "We can't afford intolerance. Unite for peace," students mostly ignore a guitar-strumming woman earnestly crooning folk songs, and they reflexively grab the fliers being offered by a young girl: "Don't Turn Tradgedy [sic] Into a War!" the handout proclaims in block letters. A "National Student Day of Action" is being scheduled for Thursday at Malcolm X Plaza; the organizational meeting is at Cesar Chavez Student Center.

In an environment like this -- a campus that was a student battleground in the '60s, and where major landmarks are named after labor heroes and black liberation martyrs -- it's perhaps not surprising that students aren't eager to put on a uniform.

"I don't support war, because I don't support this government," says 26-year-old Jose Gutierrez, an ethnic-studies major wearing a Guatemalan scarf and a leather jacket. He says he's organizing a vigil in favor of peace. "Any kind of military action is a symbol of U.S. imperialism," he says, "not of humanitarian interests."

His friend, 25-year-old Roberto Ochoa, proudly quotes Noam Chomsky: "There's been so much U.S. intervention in the world that led to what happened last week. Like Chomsky said the other day, we should be asking what we did to deserve this."

The response of Jamal Abdo, a 22-year-old broadcast and electronic communications major with Palestinian ancestry, was equally skeptical: "Who are we striking against, and what am I fighting for? There's more going on than what we're being told. Politicians have agendas and we aren't on it. If I were to get drafted, I'd be outta here. No way."

Or, as 18-year-old "John Smith" put it, "I'd go to Canada and face exile. I don't believe in killing people for any reason. Bush thinks the loss of innocent lives will pay for our lost innocence. It won't."

These peace-loving San Francisco college students may not be representative of all young American men and women. But few of the nearly two dozen students interviewed this week felt strongly that the U.S. should go to war, and those who did had difficulty articulating what we'd be fighting for. Three-quarters of the young men (and one woman) said they would go if drafted, but virtually none said they would volunteer to enlist.

Among the most gung-ho was Damola Oshin, an 18-year-old at Southern Illinois University in Edwardsville. "If the military needs help, Americans should join together and fight for our country, because this is our country and, I mean, there has been a violation of our country," he said. "I mean, these motherfuckers just come up in here and just spit in our faces and we can't just take that stuff. So if our military needs help, I think every citizen should get up and fight." Still, Oshin expressed some doubt over whether the current threat to the U.S. was "worth dying over."

"I would gladly go [fight], actually," said Jay Sherfy, an 18-year-old student at St. Louis University. "This whole thing, I don't know, kind of made me bloodthirsty. I want to see something done about it." Nevertheless, added Sherfy, he would be drafted before he'd enlist, and he still wasn't sure the terror attacks merited a full-blown war.

Jackie Sangco, a 20-year-old diagnostic ultrasound major at Seattle (Washington) University, also had mixed opinions. "I have a strong feeling against any military drafting," she said. "But if worse comes to worst and they do need people and they do need to draft women my age, I think I would be willing to do it for the sake of my country."

Even those young men and women who are ready and willing to fight have a hard time envisioning themselves with automatic weapons strapped on their backs, climbing across the mountains of Afghanistan to fight the enemy. This is a generation raised on the horrors of Vietnam (brought vividly home in movies like "Apocalypse Now" and "Platoon"), whose most recent war, Operation Desert Storm, came over CNN like a video war game, with few American casualties. To them, the idea of a ground war is both appalling and antiquated. Most seem to hope that we can avoid this scenario altogether but they aren't entirely sure what the alternative would be.

"Everybody's saying it's going to be a different war than has ever been fought," said Steve Browne, a 23-year-old student at Southern Illinois University, Edwardsville. "I think there should be a lot of Special Forces in this war because we don't know how to fight over there, you know what I'm saying? I don't want another Vietnam."

"I don't think Americans understand the scope of the situation. Right now, everyone is rallying to fight, but what about two, three years from now when young Americans are dead?" says Manuel Corral, a 24-year-old San Francisco State student. "With our advanced technology, we should find some other means of achieving our military goals to protect our freedom."

Many of the young Americans we talked to were also aghast at the notion of killing innocent civilians, fearing that military action would bring the U.S. down to the level of its attackers while inspiring further terrorist assaults. "If we can find that one person or one group that's responsible, you know, and go and get them, that's fine," said Brent Boesdorfer, 20, of St. Louis University. "But I don't think that taking on a whole country or something, a bunch of innocent people, would be worthwhile."

And some of the young men with foreign-born parents were suspicious of the American government's motives in declaring war on unidentified terrorists whom it may have quietly supported in the past. Many among this generation of young men and women have ancestry that affords them some first- or second-hand knowledge of the last decades' wars and skirmishes in the Middle East and Latin America -- conflicts in which the U.S. role sometimes provoked heated controversies.

"If we're going to war, it's partly due to the U.S. being there before. I don't know why I should go to war when it's the government's problem. Why are we in the Middle East in the first place? I don't believe in fighting for oil, since it will be gone in 50 years anyway," said Azarias Castro, a 19-year-old San Franciscan of Salvadorean ancestry. Castro says he'd only be willing to fight "if they came here, knocked on my door and started killing people."

Indeed, the specter of more terrorism carnage on American soil seemed to be the only threat capable of driving even the most skeptical of these young people to enlist.

"If it is putting into question our way of life, would it be worth dying for?" pondered Jonathan Sakti, 21, of San Francisco State. "I don't know if it would be now, but if they get into biological warfare and people are dying all around me, and I'm going to be dying anyway one way or another, I guess so."