The Yankees in six

There. I said it. The Diamondbacks have a shot, but not really. 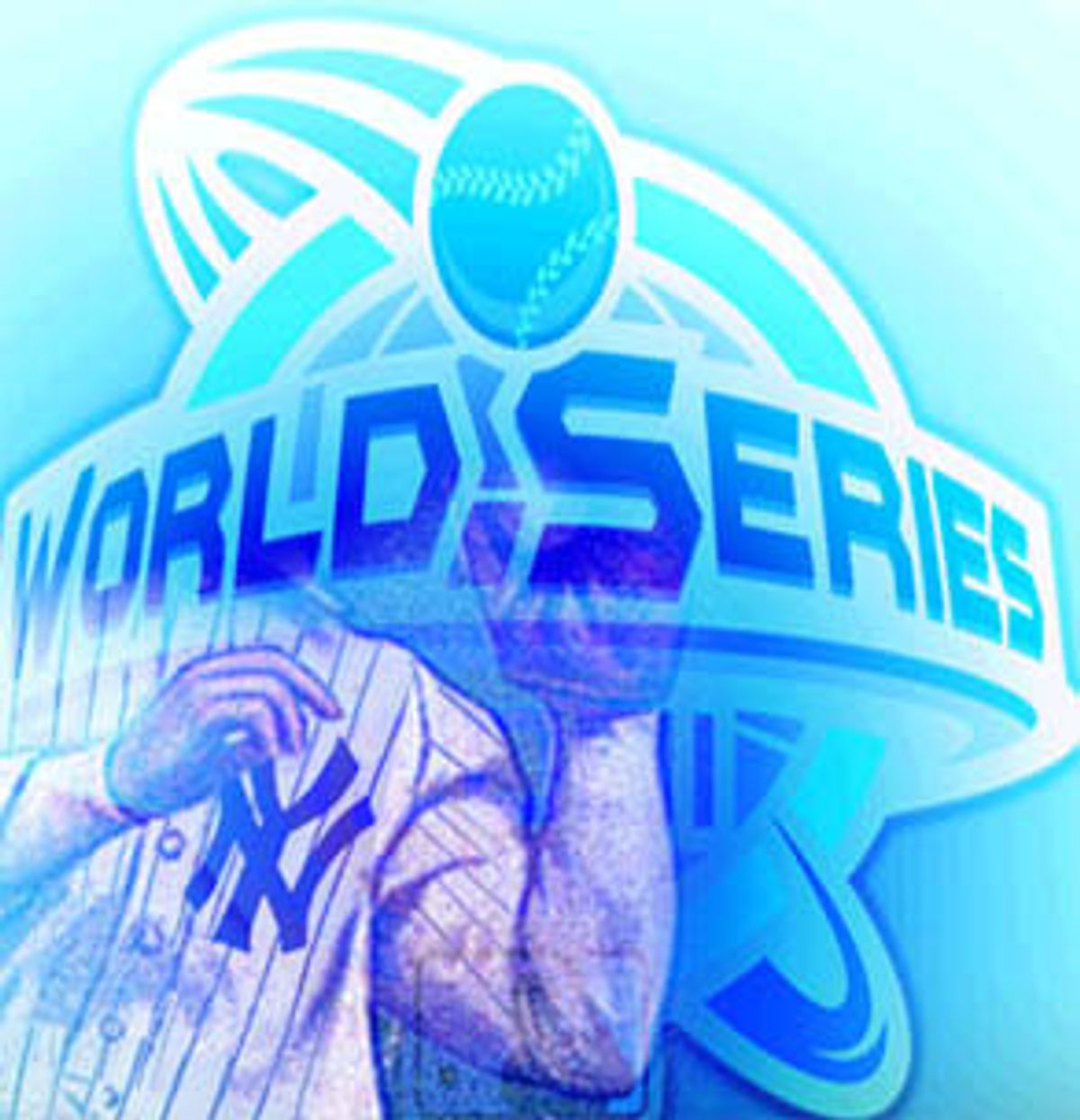 I'm tired of picking them to lose and being wrong. I see the error of my ways. O cruel, needless misunderstanding! But it's all right, everything is all right. I have won the victory over myself. I love the Bronx Bombers.

The Yankees didn't look that formidable going into the playoffs. Sure, they walked away with the American League East, but anyone ambulatory could have done that. The East, after all, had three losing teams, and if the season were just one week longer, it would have had four. The Red Sox, dive-bombing toward .500 and below, simply ran out of time before they hit the ground and began tunneling.

Of course, the Yankees looked much worse than not so formidable last year, and they won the whole thing. I noted that, by way of hedging, when picking them to lose to the Oakland A's in the first round, which they did not do. Of course they didn't. They fell behind two games to none at home, but that was just a tease. That was Captain Kirk being taken prisoner by the evil warlords down on that weird planet. If you'd been watching for the last few years, you'd know that the A's were playing the role of those two anonymous guys in red shirts who beam down with the captain and Mr. Spock and Bones at the beginning of the episode. Phaser fodder. Doomed.

The Yankees dusted themselves off and escaped just before the last commercial, as you know. Their comeback against Oakland is already a part of American folklore. There are already three universities in New Jersey offering graduate seminars on the semiotics of Derek Jeter's relay throw in Game 3.

The Yankees moved on to the American League Championship Series against the Seattle Mariners, who had won a record 116 games, and who looked darn near unbeatable even after nearly losing to Cleveland in the first round. That was just a slip, right? The smart money had to be on Seattle. Only the smart money is never on the team playing the Yankees, not when the leaves are falling. The Mariners went down with a whimper in five. You know that because of the statue of Andy Pettitte that's been erected on the Mall in Washington.

So you may have noticed that although this World Series preview has been bumping along for about 480 words and has included no fewer than two impossibly precious pop culture references, the name of the National League champion has yet to be mentioned.

Get used to that. The Arizona Diamondbacks are to this World Series as the Other Leading Brand is to a detergent commercial, if I may continue the television theme. They have to be there so that the side that's going to win has somebody to beat. But they aren't really the costars. Consider this: The Yankees have been winning world championships consecutively for as long as the Diamondbacks have existed.

Before we declare the Yankees champions, which I now realize -- O stubborn, self-willed exile from the loving breast! -- we must do, we ought to at least make a show of acknowledging that yes, the Diamondbacks do have a chance to win. After all, that possibility is the theoretical reason they play these things.

The Diamondbacks are essentially a mediocre team that has two outrageously good pitchers. Nearly every time those pitchers, Curt Schilling and Randy Johnson, take the mound, the Diamondbacks win. When anyone else takes the mound, the other team stands a very good chance. With Schilling, who has been particularly brilliant this post-season, or Johnson starting, Arizona is 57-19, including 5-1 in the playoffs. With anybody else on the mound, the D-backs are 42-54.

Line up the Diamondbacks and the Yankees position by position and it's just silly. It's all Yankees. Oh, you could make an argument for the creaky Matt Williams over the rickety Scott Brosius at third base, things like that, but when it comes to the major players, the Yanks have Jeter, Bernie Williams, Tino Martinez, Jorge Posada. The Diamondbacks have Luis Gonzalez and Reggie Sanders, although Sanders has tended to fail in the post-season. He's hitting .226 this year, which brings his lifetime average up to .160 in 20 games. They have Mark Grace too. He's a nice player. Tino Martinez is better.

The Yankees aren't deep with position players and the Diamondbacks are. Arizona will benefit from Erubiel Durazo getting some extra at-bats as a designated hitter. But a better bench doesn't trump a better starting lineup, and in a far more important category, the Yankees' bullpen, led by Mariano Rivera, puts the Diamondbacks' to shame. If the Yankees are ahead in the seventh inning, they're almost impossible to beat. The same cannot be said for the Diamondbacks.

So what it comes down to is this: Can Arizona's two dominant pitchers be dominant enough to win four times? They'll get four starts, maybe even five if manager Bob Brenly decides to shorten their rest, always an iffy proposition, particularly for power pitchers. If the Yankees beat the dynamic duo once, the D-backs are in trouble. If they beat them twice, it's all over.

And the Yankees aren't exactly sending stiffs out to oppose them. Mike Mussina, who'll oppose Schilling in Game 1, is pretty much the best pitcher in the world right now. In his last 12 starts, from mid-August through the playoffs, he's allowed three or more runs only twice, he's allowed no runs seven times and he's 8-1 with a 1.41 ERA. Even if Schilling is as great as he's been so far this postseason (three starts, three complete-game victories, two runs, 13 hits, 30 strikeouts in 27 innings), it might not be enough. Johnson will match up with Andy Pettitte, the Most Valuable Player of the League Championship Series, who's as reliable as anyone in big games.

Beyond those two, the Series returns to the Bronx and so does the advantage. Yankee pitchers Roger Clemens, even nursing a sore hamstring, and post-season specialist Orlando Hernandez, even with his inconsistency this season, are vastly superior to Brian Anderson and Miguel Batista, the Diamondbacks' projected starters. Anderson, a reliever for most of the year, is a surprise move by Brenly, who wanted a left-hander to pitch at Yankee Stadium, with its short right field porch, and who is probably tired of watching Albie Lopez get lit up. Batista is something of a wild card. A starter-reliever, he finished the season with a couple of nice starts, and he's pitched pretty well in the playoffs, but overall he's been inconsistent.

If the Diamondbacks can scratch out a win in one of those games, then Schilling and Johnson don't have to be perfect throughout the Series. Let's just say it would be wise for them to be perfect.

The one thing the Yankees have that the Diamondbacks don't, and they have it in spades, is the Yankee Mystique. You can call it that or you can just call it October experience. The Mariners talked about it after they went down in the ALCS. "They turn it up a notch, as does everyone else," said third baseman David Bell. "But I think that's probably the difference, just the fact that they really focus and know how to win in the post-season." He talked about the fact that the Yankees have "another level" that they reach in the playoffs and World Series.

They'll need to reach that level to get a win or two against Schilling and Johnson. They'll reach it. But it will be all right, everything will be all right, the struggle will be finished. Two gin-scented tears will trickle down the sides of my nose. Yankees in six.