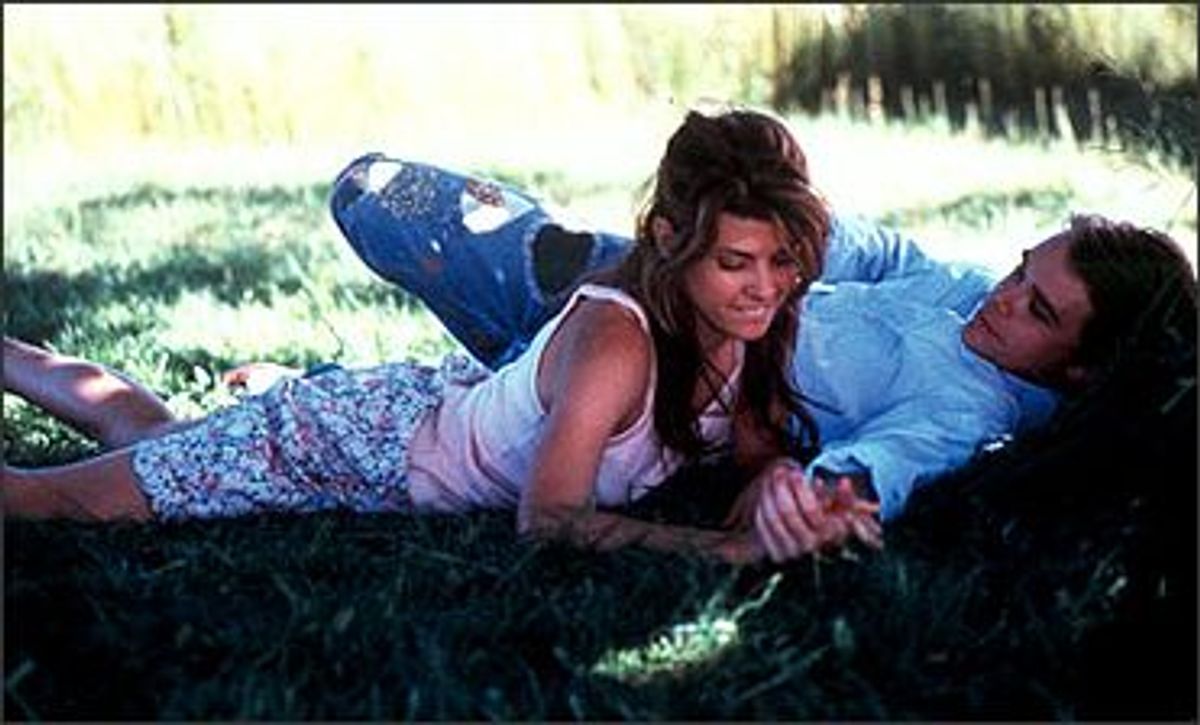 "In the Bedroom" is a movie about life in charming wood-frame houses that could use a paint job, a movie in which the parish priest shows up for a backyard barbecue and jokes to the men present, "If I don't see you fellows here, I don't get to see you at all." On the surface, it's another representative of the kind of low-key American realism that has been gaining a renewed currency in the film world; think "The Perfect Storm" without that big wave, or "You Can Count on Me" transferred to the coast of Maine.

There were moments when this debut film from director Todd Field (previously known as a supporting player; he was the jazz pianist in "Eyes Wide Shut") irritated me as much as it impressed me. Its dialogue has a searching, overly earnest quality and its pace sometimes plods. But even the plodding has the dreadful certainty of an iron-shod monster pursuing you in a dream. For all its flaws, "In the Bedroom" is an unusual accomplishment, a serious drama about violence and morality that plays out with a fatalistic intensity somewhere between Greek tragedy and film noir.

Even the film's title, as we learn in one of its first scenes, is primarily a metaphor for imprisonment and death, and only a glancing reference to sex or matrimony: The "bedroom" is the innermost chamber of a lobster trap. Fresh-faced Frank Fowler (Nick Stahl), a college graduate bound for architecture school, has taken up his grandfather's trade as a lobsterman for the summer and is toying with the idea of sticking it out for a while. Frank's romantic vision of the traditional life in his hometown of Camden, Maine, is also influenced by his liaison with Natalie (Marisa Tomei), a 30-ish single mom with a working-class Down East accent and some unfinished business with her estranged husband Richard (William Mapother).

One of the distinguishing characteristics of "In the Bedroom" is that Field's focus is not on this unstable triangle but on Frank's parents, Matt (Tom Wilkinson), a prominent Camden doctor, and Ruth (Sissy Spacek), who teaches choral singing at the high school. While the spacious and unhurried nature of Field's directing isn't always a plus, it allows this extraordinary pair of actors -- with something like 50 years of combined stage, screen and television experience between them -- to create a compelling portrait of a profoundly damaged middle-class marriage that may, just, be redeemable.

Many of us in the viewing audience will feel that we know Matt and Ruth, almost literally: They are distracted small-town Democrats with rumpled clothes and high-middlebrow cultural taste who own an old TV and a slightly ramshackle house although they could certainly afford better. Their view of Natalie is fundamentally informed by class, as much as they might like to pretend otherwise. Matt certainly sees the allure of this married woman with the luscious brown eyes, two kids and murky emotional history; in fact, he may see it a little too clearly. For Ruth, who is more than a tiny bit jealous and protective of her only son, Natalie is a needless and dangerous complication.

This is a difficult film to review without plot spoilers; if you don't want to know about the story's first major twist (which happens less than a third of the way through), then stop reading now. "In the Bedroom" is adapted (by Field and co-writer Rob Festinger) from a short story by the late André Dubus, who was both a moral philosopher, in a vein unfamiliar to American literature since the days of Hawthorne and Melville, and an astute observer of the role of class in shaping human destiny. Field knew Dubus well and began to plan his film with the author's blessing before he died two years ago; perhaps he thought that the title of Dubus' grim little fable, "Killings," was too forbidding for movie audiences (and indeed gave too much away).

Much of the slackness in Field's filmmaking -- which, to be fair, many viewers will tolerate better than I did -- evaporates with a short, sharp shock. Richard, who up until now has seemed like a hapless but well-intentioned deadbeat with a bad Billy Idol dye job, flies off the rails, beats up Natalie and trashes her house. Frank, who's been screwing up his courage to break up with Natalie at his mother's insistence, rushes over to protect her. Richard comes back with a gun, and the ensuing scene has the terrible, weightless quality of real-life tragedy: Natalie scrambles her panicked kids into their bedroom, a shot is fired as she rushes downstairs, she dives to the kitchen floor, screaming and crying. We don't need to know more.

So yes, "In the Bedroom" is partly an issue drama about a middle-aged couple who have to face every parent's worst nightmare, but it also has a trickier agenda. It captures Dubus' fascination with the nature of justice, and in fact with its impossibility. It's also a study of how amazingly painful life can become when its ordinariness, its tiny, protective hypocrisies, are stripped away. Matt goes back to his medical practice and Ruth to her Balkan chorale, but none of it is tolerable. Religion and literature provide no consolation.

When the explosion between this pathologically polite couple finally comes, its dialogue (like so much of this script) feels overcooked, but its emotion is necessary and plangently real; they have lived through their son for years, and now hate themselves and each other for it.

When Ruth goes to the local market, she risks running into Richard, who is out on bail and may face nothing worse than a five-year manslaughter sentence. Their old friends Willis and Katie (more fine veteran acting from William Wise and Celia Weston) chatter on blithely about their innumerable grandchildren, before realizing that Ruth and Matt don't have any and never will. There is nary a note of mockery or satire to "In the Bedroom," but it captures Dubus' conviction that our contemporary clichés about healing are empty: When Matt tracks down Natalie at her convenience-store job, they realize they have nothing to say to each other.

More things happen that I'm not going to tell you about, and we take two long journeys to Willis' house in the deep woods of central Maine, one of them in the depths of night, that seem increasingly psychological or symbolic in nature. With his gradual, lead-footed trudge, his touch that is sometimes delicate and sometimes alarmingly awkward, Field ratchets the tension up to a nearly intolerable level. For all my misgivings, I doubt I'll ever forget the startling climax of "In the Bedroom," or its haunting final image: Matt lying stone-faced in bed, half naked, with cigarette smoke rising from his chest, looking as if his heart were on fire.