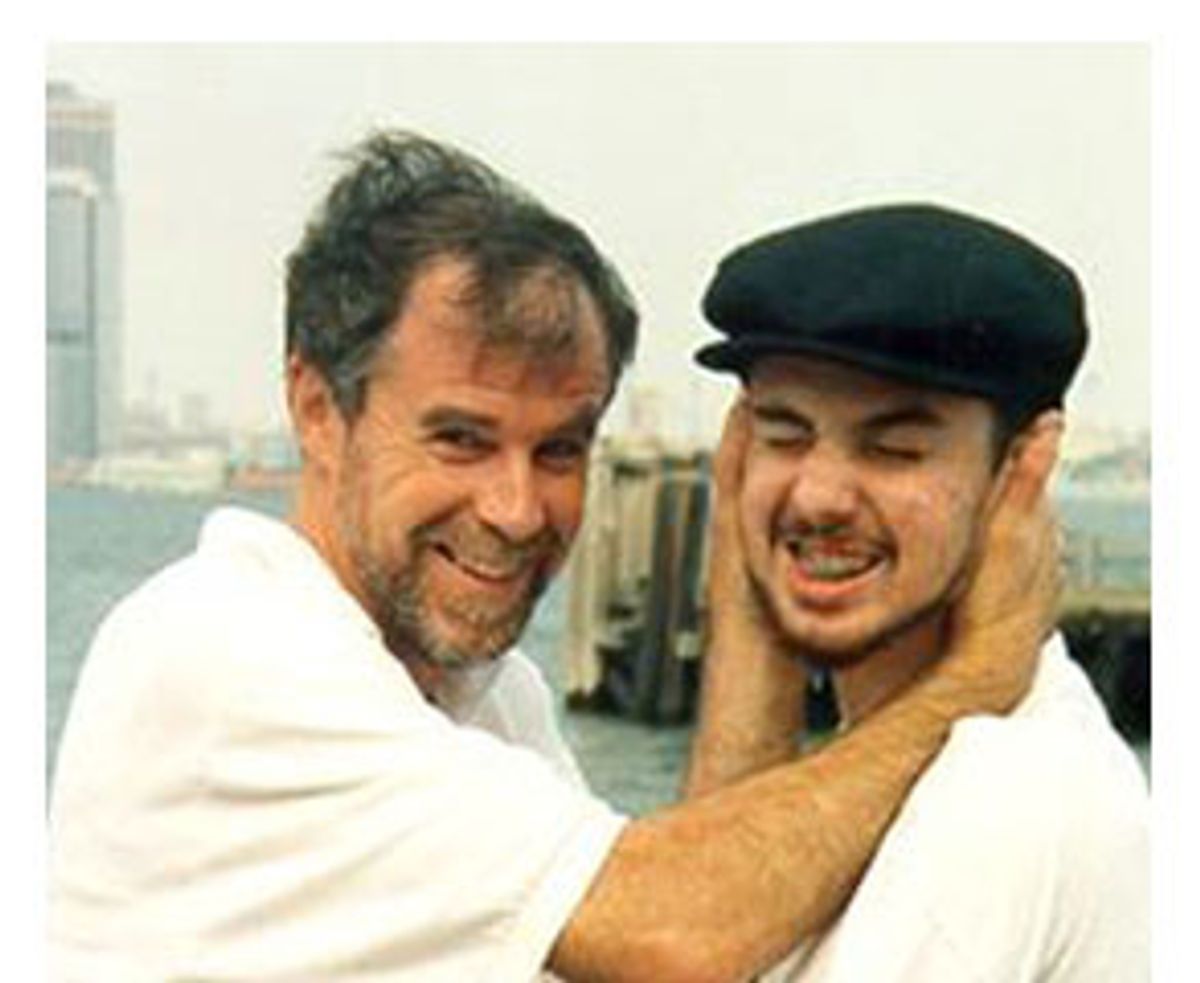 He "was critical of America as a land that exalted self above all else." Americans "were so busy pursuing their personal goals, he said, that they had no time for their families or communities." He "wanted a value system of absolutes."

These sentiments are boilerplate standards for fire-breathing American conservatives excoriating our spineless, Godless iniquity. As it happens, though, the words are from a Newsweek profile of John Walker -- the American youth who turned up, smudge-faced and battle-shaggy, among the Taliban fighters who staged a savage prison uprising in Northern Afghanistan.

Of the many strange paradoxes surrounding Walker's sad tale, this may be the strangest: It turns out that Walker's own, radical-Islam-fueled critique of U.S. liberalism dovetails perfectly with that of American pundits on the right who are now trying to use his story as an example of liberalism gone awry.

The case -- outlined most prominently by Shelby Steele in a Monday Wall Street Journal op-ed, but echoed on call-in talk shows and online forums -- goes like this: Walker was raised in hot-tub-bedecked Marin County, cradle of California alternative lifestyles, home to woo-woo wackiness, schools that emphasize America's sins and a permissive spirit that makes Dr. Spock look like a martinet. As his teenage spiritual quest veered deep into Islam, his well-to-do parents just smiled and said, "Yes, dear"; they even paid for him to study Arabic in Yemen, and stood by without intervening when he wandered first to a Pakistani madrasa and finally into the ranks of the Taliban. All this makes Walker, as one pundit on "The McLaughlin Group" put it, a "poster child for liberal alternative lifestyles gone bad."

That's no coincidence, Steele argues: Marin liberalism played an active part in Walker's odyssey from pristine suburbia to a filthy Mazar-e-Sharif basement. Walker "came out of a self-hating stream of American life" with roots in both Marin's "wispy relativism" and a broader "post-'60s cultural liberalism." "Fashionable relativism" taught Walker that "Islam is as good as the family Catholicism" and that "anti-Americanism" could be worn as a badge of sophistication. The book that first turned Walker on to Islam, according to his father, was "The Autobiography of Malcolm X." "White American guilt," Steele says, inspired Walker's "Malcolm-style conversion into a politicized, anti-American Islam that culminated in treason."

If Steele is right, and the forces of relativism, liberalism and "subversive, winking, countercultural hipness" that dominate American society are to blame for Walker's apostasy, then the hills should be positively crawling with Taliban fellow travelers. Funny, though: I read Malcolm X as a high school student in the 1970s, at an affluent New York City private school at the height of what we still call "The Me Decade" (though its materialism and self-absorption were eclipsed by each decade to follow). "Cultural relativism" was at least as prevalent then as it is today. Many millions of high school students have read Malcolm X since. Of those millions, Walker is one of what can only be a microscopic number of supposedly self-hating white Americans to be persuaded by Malcolm's story to convert to Islam. And he is almost certainly the only one to take up arms against his country.

Similarly, if Marin County permissiveness and "cultural liberalism" were the forces responsible for turning Walker into a Taliban fighter, then surely we'd have seen an active pro-Taliban movement recruiting on the slopes of Mount Tam -- a latter-day Abraham Lincoln brigade of American lefties embarking from Sausalito to fight for the Mullah in Kandahar.

Forget it. Walker, of course, is notable for his singularity, his sheer unique improbability. No one expected to find an American kid among the Taliban -- least of all among the diehard holdouts of a prison rebellion holed up for a hellish week. The U.S. today is more united behind its war effort than during any other conflict since the Second World War; in such times, Walker is sui generis -- a fascinating fluke, not a representative case.

For Steele and those who share his perspective, though, the opportunity to turn Walker into a poster child for the evils of relativism and liberalism is just too tempting. Let's rail against the liberal establishment that failed to give this kid a clear set of rules and beliefs! Let's string up his parents for failing to "just say no"! It's certainly easier than waiting for the facts, or trying to fathom what depths of alienation or anger could put a teenager on such a misbegotten trajectory.

Whether Walker deserves to be tried for treason, to plead guilty to some lesser charge or to be given psychiatric treatment is a proper question for the U.S. justice system, not for the talk shows. As a U.S. citizen, he can presumably still count on a fair public trial, rather than face a secret military tribunal. Due process can and should determine his fate -- and if that fate is to be convicted as a traitor, so be it. Bearing arms against your countrymen is a grave matter, whatever the circumstances and the excuses.

But if we want to learn something from the events, plugging them into any kind of partisan matrix of good parent/bad parent -- whether it's "responsible conservative good, permissive liberal bad," or "open-minded liberal good, mean conservative bad" -- just won't do.

Sure, the Marin-style permissiveness that irks Steele deserves to be viewed with a degree of skepticism. Balancing freedom and rules is every parent's task, and in places like Marin, rules may not always get their due. An 18-year-old may well hear a parent's "Follow your bliss" as an indifferent "We don't care what you do." Failing to give a child any guidance at all is just as unfair as forcing a child to follow a preset path.

But not every conflict in a teenager's life is susceptible to easy Parenting 101 fixes. Adolescents work hard to script passionate dramas for their lives in which, finally, they and not their parents are the stars. Changing religions is -- like joining a cult or dropping out of school or starting a band -- an extremely popular plot twist.

Think back to your 18-year-old cohorts and you can probably remember one or more who share at least some of Walker's apparent traits. We all knew and know seekers of faith, kids who, as part of the adolescent identity game, try on religions for size. For many it's a phase; others latch onto some belief that their families find extreme and hold tight for the rest of their lives. For some it's a genuine quest for meaning fired by an honest repugnance at the material excesses of Malltown, USA. For others it's just a way to stick it to Mom and Dad.

Teenage rebellion is a fact of family life that knows no political allegiance or religious affiliation; when it's going to happen, it's going to happen, and the parent's stance, whatever it is, simply calls forth its opposite. The colonel's daughter becomes a pothead; the Nobelist's child flunks out; the Marin free thinker's son joins the repressive Taliban.

Now, most of us reading Walker's story are probably going to think, "Hey, if my kid asked to go to Yemen to study Arabic, no way I'd agree!" And while it's easy to second-guess another parent's decisions, in this case it sure feels right.

But we don't know John Walker. We don't know whether he sought "a value system of absolutes" because his parents failed to give him one, or because he knew that it was the opposite of what his parents had taught him. Maybe a stricter upbringing than Walker's parents provided might have kept him out of the Taliban; then again, maybe he'd have instead ended up as a runaway on Telegraph Avenue in Berkeley, bumming change.

Was Walker a true believer or an angry kid? Did he run away to Yemen out of love for the Quran or just to get away from his folks? We can't answer till we know more of his story. In the meantime, it's worth remembering what the New York Times reported, soon after Walker turned up in Mazar-e-Sharif: In the story, a Northern Alliance officer "indicated with a hand gesture that Mr. Walker was eccentric."

Perhaps he meant that Walker was nuts; perhaps he just meant to suggest the strangeness of the very presence of this lone American mujahedin. Either way, the Afghan's dismissive, rude "gesture" helps remind us that Walker is an individual, not a symbol. And in the end, his riddle will be answered by understanding his family and his psychology -- not by crudely applying culture-wars rhetoric to his case.