If Enron isn't a political scandal, nothing is

So what if Bush and company didn't bail out Enron? The outrage lies in what politicians did for the company on its way up, not the way down. 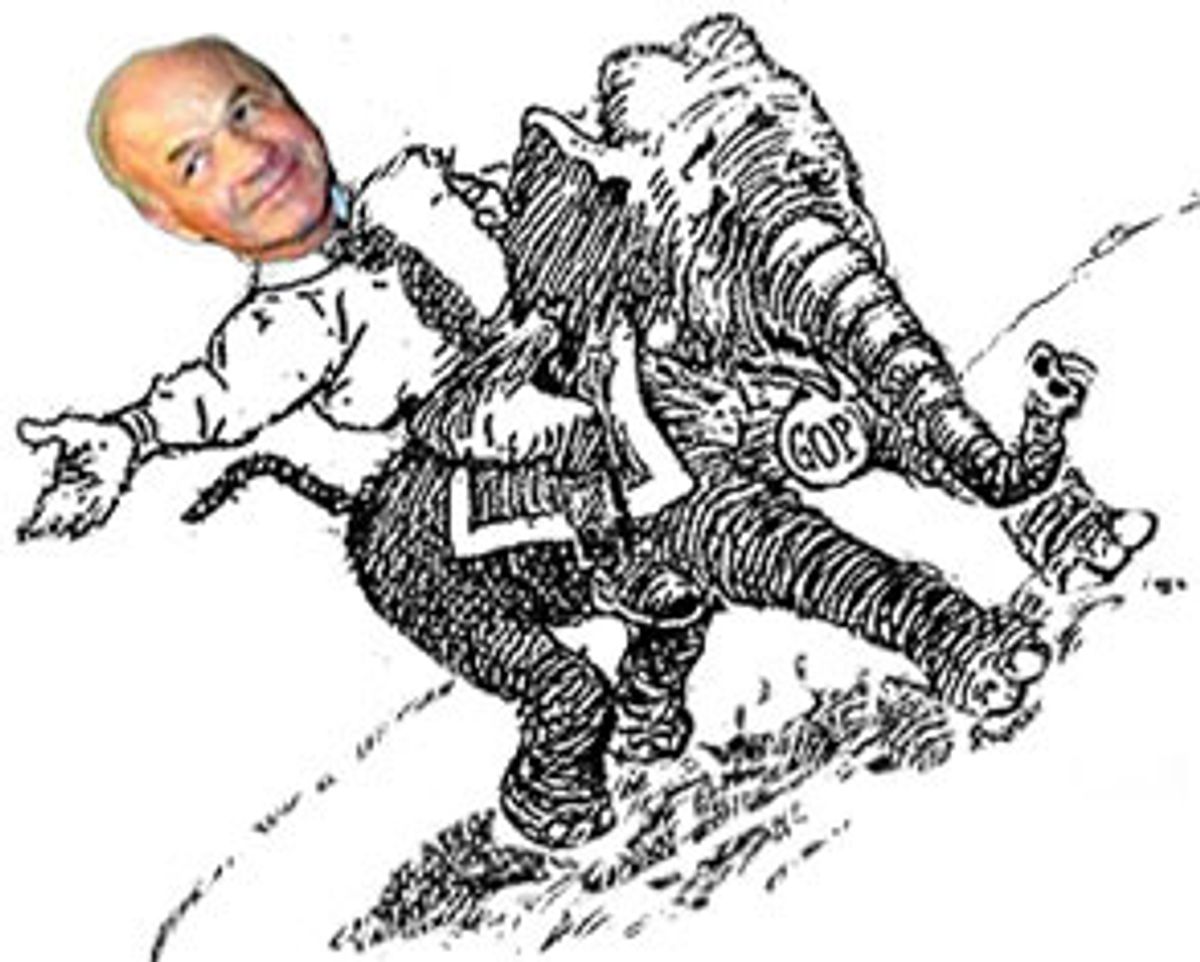 The collapse of Enron, we now hear, is not a "political scandal" -- it's a business story. A fine distinction! So far, no one possesses evidence that government officials lied, goofed around with interns, ran guns from the White House basement, burglarized opponents' campaign offices or accepted bags of unmarked bills. And so a growing chorus in the media now chants that the Enron affair should not be considered in the same class as Whitewater, Watergate, Iran/Contra or any of the other previous brouhahas that have consumed Washington and brought presidencies to their knees.

"I don't think it's a political [scandal] story yet. I think it's a business scandal" -- that's how the National Journal's Charlie Cook put it during a journalism panel covered in the Hotline. "Reporters try to put everything into a Whitewater/Watergate prism."

This tells us that the scandal yardstick our political and media culture currently uses is bent like a pretzel. You say your president may have finagled a real estate deal many years ago? Time to name a special prosecutor! He lied about his sex life? Draw up the articles of impeachment! But tell us that a high-profile corporation donated millions of dollars to legions of politicians, including the president; bent the government to its will; lined the pockets of its executives while dodging all taxes; then went bankrupt, vaporizing thousands of employees' retirement accounts? Nah, that's no "political scandal." Come on -- where're the bimbos?

Enron's dismal story simply doesn't meet the high bar of triviality the press today demands. The sums of money involved are too great; the flaws in our political system that it exposes are too vast. It's just too real to qualify.

The Enron affair seems to have earned its "get out of jail free" card from the pundits because, so far, it seems that no one in the Bush administration was stupid enough to try to help the corporation last autumn as its fortunes circled the drain. And since Enron's campaign-donation tentacles and friends-in-high-places influence appears to have extended to both parties -- lopsided a good ways toward the Republicans but also boasting some serious Democratic names (including former Treasury Secretary Robert Rubin and New York Sen. Charles Schumer) -- the Enron saga does not perfectly fit the capital's partisan templates.

To which the conscientious citizen should respond, so what? If Enron isn't a political scandal then we might as well retire the phrase from our vocabularies. Of course no one in the Bush administration lifted a finger to help Enron while it was on the way down; they all understood that the spotlight on them was too glaring. It was while Enron was on its merry way up the stock price charts, conjuring markets out of thin air and billions in revenue through accounting tricks, that the company cashed in its chits with our politicians. Enron's campaign contributions may not have purchased it a reprieve from bankruptcy, but its gifts had already been paid back with interest by both the legislative and the executive branches of our government.

What did Enron get for its money? We're only beginning to unravel the full list, but from what's already known, the answer is: plenty. Enron's political contributions weren't made out of charity or friendship; they were quid pro quos. The "quids" are on public record because campaign finance laws require their disclosure. Here are some of the "quos."

We know that Enron essentially engineered the removal of a chairman of the Federal Energy Regulatory Commission whose policies it disliked and had him replaced with a long-time Texas ally who could be expected to be more friendly to its interests.

We know that Enron would have benefited profusely from the corporate alternative minimum tax repeal that President Bush and his party have pushed so avidly. Not paying any income tax (through "the creation of 881 subsidiaries abroad, including 692 in the Cayman Islands, 119 in the Turks and Caicos, 43 in Mauritius and eight in Bermuda"!) wasn't enough for Enron; it wanted -- and would have won, if this provision became law -- a gigantic tax rebate from the public trough.

We know, thanks to the Wall Street Journal, that Enron used its political clout to ward off government oversight of its trading in derivatives. Many financial experts and public officials foresaw trouble in Enron's growing role as both "market maker" for the trading in these complex financial instruments and a participant in the same markets it oversaw. Enron turned to recipients of its largesse like Texas Sen. Phil Gramm to keep the government's fingers out of its hair. (Gramm's wife, Wendy, led a deregulatory push as head of the Commodity Futures Trading Commission in the early '90s -- then resigned to become a member of Enron's board.) Even after the 1998 collapse of the Long Term Capital Management hedge fund spurred new congressional calls for reform, Enron pulled strings to make sure that it could do as it pleased in these markets, unrestrained by the kind of fair-rules enforcement provided in more traditional commodities and securities markets.

We know that Lawrence Lindsey, Bush's chief economic advisor, was put in charge of monitoring Enron's collapse, even though he was a paid advisor for Enron as recently as the year 2000.

That's just at the federal level. In Texas we know that Enron's contributions to then-Gov. George W. Bush won it a variety of perks and favors, including a Bush effort to lobby his friend Pennsylvania Gov. Tom Ridge on behalf of Enron. And in California, Enron was a key architect from the beginning of California's disastrously half-baked energy deregulation plan, which last year drove the cost of energy in the nation's most populous state through the roof and cost the state treasury a fortune.

No doubt there's more. Plainly, Enron got its money's worth. As we learn more about Enron's business from the growing stink of the Arthur Andersen coverup, it's increasingly clear why Enron needed to buy so many political favors: It was the most efficient means of providing cover for the company's smoke-and-mirrors financial strategy.

Enron pumped up its stock price by jaw-droppingly "aggressive" accounting practices, like fobbing off its debt onto hidden partnerships, claiming hundreds of millions in revenue from phantom projects (like the broadband video pilot project the Wall Street Journal reports on today, where 1,000 test customers for a movie-on-demand service somehow generated $110 million in profits -- that's $110,000 per couch potato!) and counting as revenue the entire cost of energy trades it brokered, rather than simply the commissions it earned -- a practice known, aptly, as "gross accounting."

If Enron had fairly and accurately reported its numbers in terms laymen could understand from the beginning, it would never have earned its stock-market darling status. And, once its stock price had been jimmied through the roof, if it suddenly switched to telling the truth, its house of cards would collapse -- that is the stark message of the anonymous whistle-blowing letter Enron official Sherron Watkins sent to chairman Kenneth Lay last August.

Enron positioned itself as a "new economy" company as it divested itself of physical assets and proudly forged businesses built on the trading of intangible financial instruments. What we can now see is that the Enron collapse, too, is a true information-age scandal. If good information had been available to the government and the public from the start, Enron could never have climbed to the heights from which it fell.

Enron was the proud standard-bearer of the deregulation movement. But its executives and supporters conveniently conflated two different kinds of regulation as it boldly fought for freedom from government control. The public understands "deregulation" to mean an end to government-mandated pricing of goods like airline seats and electricity. And common sense supports the notion that markets set such prices better than government bureaucrats can.

But there's another kind of regulation that's absolutely essential for those markets to work properly. It's the kind of regulation that publicly certified accountants and the SEC provide for the stock market -- regulations that require companies to disclose information that partners, competitors and the public need to make rational business choices. Enron's success at remaining "deregulated" in this second meaning of the word paved its way toward its collapse.

It doesn't take a doctorate in economics to see the fixes our political and economic system require in the wake of Enron. We need more effective oversight of new buccaneer markets, not to "regulate" the life out of them but to ensure that they operate fairly and don't get manipulated by Enron-style hucksters and shysters. And we need tough campaign finance reform -- stronger than the relatively mild constraints that the Republican House, led by friend-of-Enron Tom Delay, has so far successfully blocked -- to make sure that participants in those markets don't buy exemption from such oversight.

It may be that Enron and its officers did nothing in technical violation of the law. If so, the scandal lies precisely there: that what they did was legal when it plainly should have been outlawed; that they managed to buy the laws they needed to build the financial house of cards that earned them millions before crashing down on stockholders' heads.

The Bush administration is deep in denial mode because so much of what was wrong in the Enron story is simply business as usual for its cadre of former oil executives and commuters through the revolving door between industry and government. Clearly, we need some new, better laws. Either Congress will pass some, or we will see just how thoroughly Enron managed to corrupt our system. And wouldn't that be a scandal.