"The Other Half" does nothing to quell the Oprah-ization of TV. "The Man Show" simply runs it over with a manly power mower. 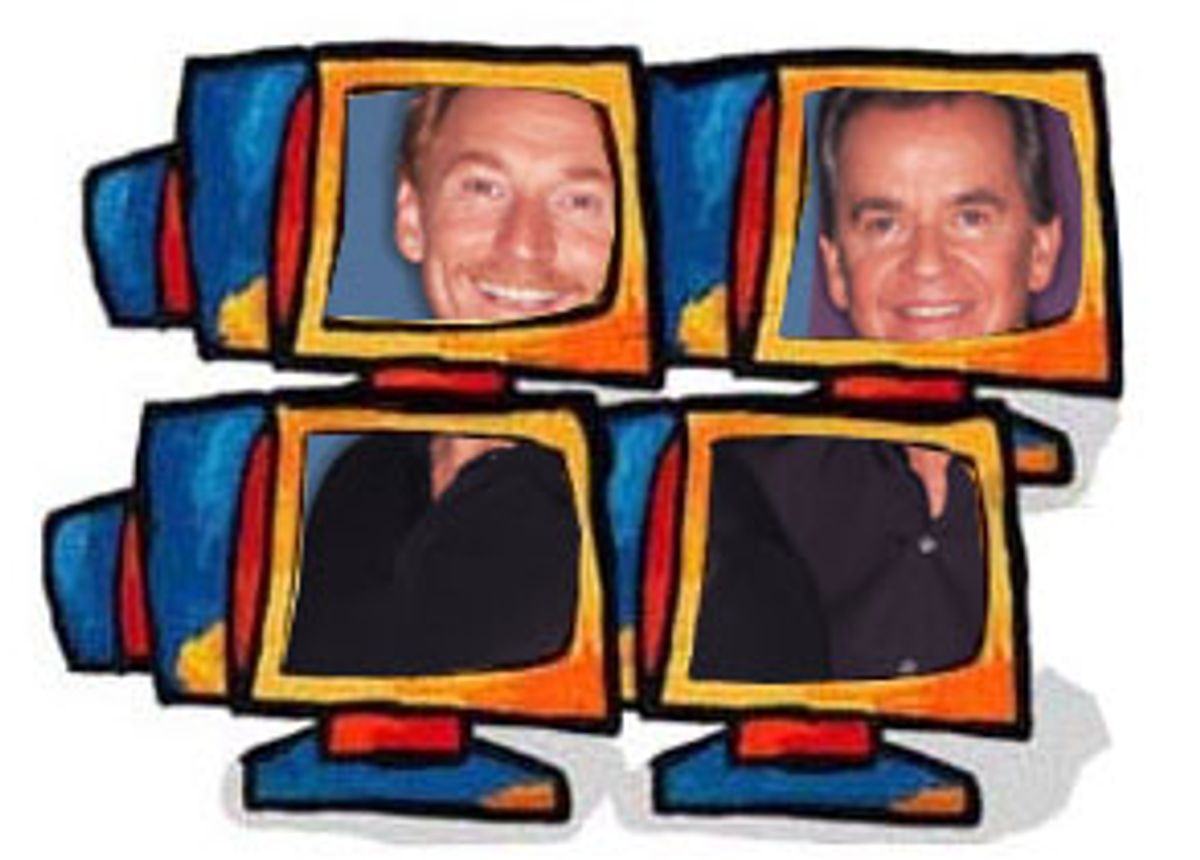 One morning, a few months ago, I turned on the TV to find Dick Clark, Danny Bonaduce and two less familiar -- but equally male -- faces seated on high stools in front of matching coffee mugs, discussing "the art of the sensual bath" with a "sensual bath expert."

A few minutes later, Dick Clark was wheeled onto the stage in a rolling tub, immersed in bubbles, hoisting a rubber ducky and lathering ostentatiously. The audience was overcome with fondness, and cheered as if Emeril had just taken out the "bam" shaker and let loose on yet another gastric time bomb. The show, I soon learned, was called "The Other Half," and it was being billed as NBC's answer to "The View" -- as if "The View" were asking any questions.

Like "The View," "The Other Half" is a morning talk show hosted by four chipper personalities of varying ages, ethnicities and professional backgrounds; with "television veteran" Dick Clark in the Barbara Walters role, "former child star turned radio personality" Danny Bonaduce as Joy Behar, and "popular television heartthrob" Mario Lopez (he used to be on "Saved by the Bell") doing a reasonable impersonation of ousted ding-a-ling Debbie Matenopoulos. Until last month, the threesome was joined by "successful Beverly Hills physician" and former Harvard quarterback Dr. Jan Adams, who also happens to be "an accomplished author, Chanel model and single dad." Alas, the talented Dr. Jan decided to leave the cast, depriving the show of its "Other" Starr Jones. He has since been expunged from the Web site photo, where Dick, Dan and Mario are left to laugh uproariously, silently, frozenly alone.

The hosts first saucily discuss the day's issues -- recently, a conversation about strip clubs leads Mario to conclude that they are disrespectful, Danny to share that his wife would "kill him" if he ever set foot in one and Dick to take the liberal view, while revealing that the last time he saw a stripper, tassels were involved. Then they are often joined by their favorite celebrities and various giants in the fields of gift wrapping, drawer organizing, bath taking, etc., come to teach the audience how to apply mascara or select a jacket or choose crudités over potato chips when confronted with a party buffet. Recent and upcoming topics include: "What NOT to say during sex," "How to spot a lifelong bachelor," "How to find your astrological love match," "Ambush makeovers," "Mind reader Sidney Friedman," "Booty calls" and "Thongs -- right or wrong?"

On coed talk shows like "The Today Show" or Regis and Whomever, it is usually the job of the women to coo knowingly over the talents of the above-mentioned "experts" while the men stand by pretending to bumble. On "The Other Half," this sense of wonderment and awe is untainted by any enlightened cooing. In one show leading up to Christmas, for example, the foursome wonders what to put in their "honeys'" stockings, "shopping expert" Laurie Grad suggests some bath beads, a gel that reduces under-eye puffiness, a lip balm that increases upper-lip puffiness and "a puff that activates and gets sparkly!"

Oh, please. Whatever view "The Other Half" brings to the deafening chatter of "women's" daytime television, it is no more "other" than any view Regis Philbin has espoused over the years. From "Regis" to Oxygen, "women's television" has rarely been about more than Mervyn's and bath beads -- so it's no wonder that the all-male cast of "The Other Half" barely registers as different. It is all but a gentle, validating kiss in the general direction of she who must never be offended.

Which leads me to Comedy Central's "The Man Show," where someone realized that after several decades of castigation, the "male gaze" was primed for a comeback. If "The Other Half" and "The Man Show" have little of interest to say on the topic of gender, they have plenty to say on the subject of gender programming.

Hosted by beer-drinking creators Jimmy Kimmel and Adam Carolla, "The Man Show" features a gaggle of dancing girls in doggie costumes called the "Juggies," who are happy to have their butts photocopied for lucky audience members, and sketches starring gaseous chimps. Recurring sketches, such as the Hallmark-esque "Father and Son with Jimmy Kimmel," explore the workings of male emotions. In a recent sketch, Jimmy shows young Kevin how to turn his sadness into anger. In another, Jimmy plays Adam's penis on a goofy sitcom.

"The Man Show," now in its third season, was born out of frustration with the "Oprah-ization" of television. An early episode, called "The Woman Show," directly parodied daytime talk shows, and other episodes have included un-p.c. tips on how to help women lose weight, and examined the world of male hygiene products and men in thongs.

Gross as it can be -- and it can be -- one of the funniest and most interesting things about "The Man Show" is how totally absent any discussion of feminism seems to be in the real world, when Adam and Jimmy take their show on the road. In one prank, the two set up in front of the Statue of Liberty to lobby for a sexier statue. Walkers-by are asked to compare the existing statue with a sketch of a scantily clad, kittenish version and to sign a petition. While not everyone signs it, nobody objects on any principle that may be identified as feminist.

If "The Man Show" accomplishes anything -- aside from being intermittently hilarious and puerile -- it is that it raises the question of whether gender-based programming has ever accomplished anything besides validating shallow stereotypes. The answer, I think, is no. And when televised chauvinism comes across as this fresh and funny, you know it's time to stop asking.