Beat me! Shock me! 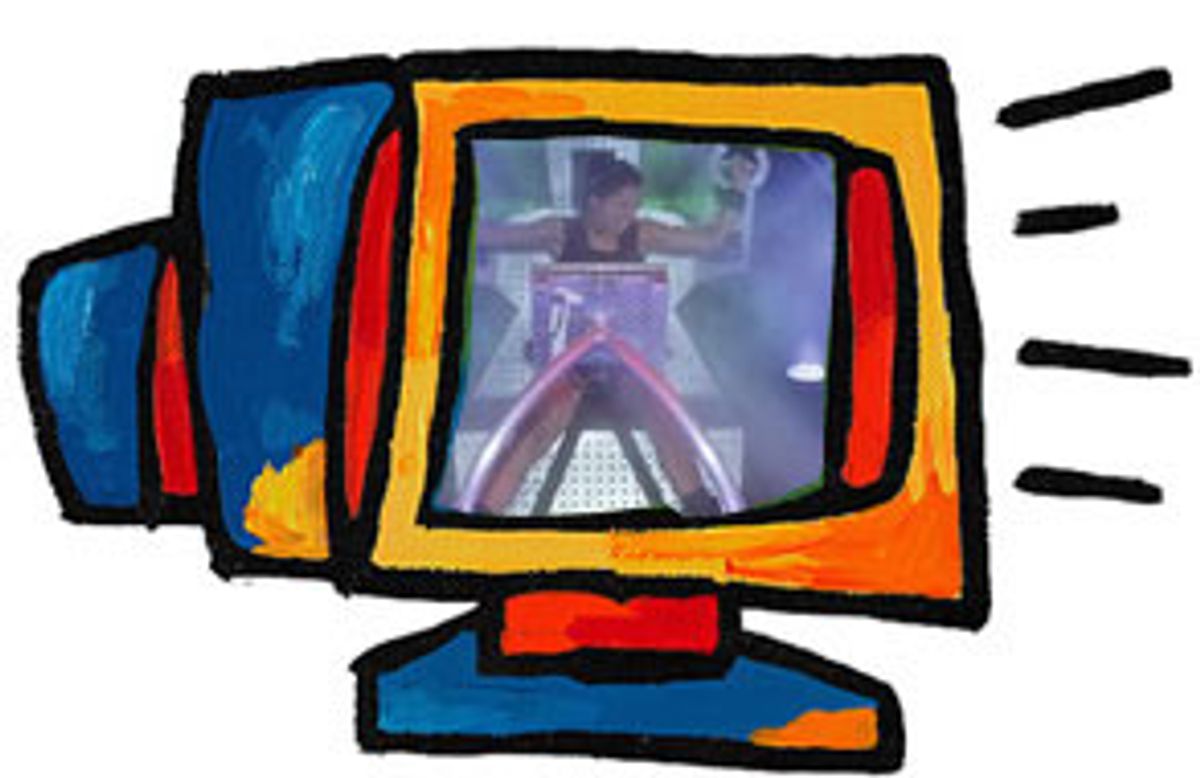 Here's another perspective on the state of the union. Al-Qaida prisoners in Guantanamo Bay may not currently be enjoying the protection of the Geneva Convention, but then, neither are the contestants on ABC and Fox's new torture-can-be-fun shows, "The Chair" and "The Chamber."

Human rights groups have been uncharacteristically quiet because, well, what could be more fun than watching a series of contestants with dreams of paying down their debt willingly submit to public torture for the chance to win $250,000? Hey, what if they were tortured and asked to answer rapid-fire trivia questions about current top-grossing movies and popular consumer products at the same time? OK, what if they promised to pump all their winnings right back into the economy?

Still not convinced? Neither were the Nielsen families. Just days after the show's official premiere, Fox has decided to pull "The Chamber" from its prime-time slot. Meanwhile, though the show must go off, the war between ABC and Fox is sure to be a long one. ABC is suing Fox for stealing its sterling idea, and Fox, which scrambled to air "The Chamber" three days before the premiere of "The Chair," is suing right back. Whether this and both shows' likely cancellation will lead to a new one in which network executives willingly submit to extreme mental anguish ("The Conference Room"? "The Commissary"?) for the chance to develop again is as yet unclear.

There is, as they say, a passing resemblance. Both shows feature restrained contestants connected to heart monitors. Both factor stress and heart-rate levels into the score. Both would benefit from an appearance by Dick Cheney. ("Dick has signed a release and is fully aware of the risk he is about to take.") But "The Chamber" is definitely the more disturbing of the two, with its forbidding, Death Star-inspired set and pouting, ultraserious host, Rick Schwartz. (Rick, it seems, is no stranger to danger and possible human rights violations; according to his online bio, "an interest in journalism compelled him to lead an international fact-finding mission to Yugoslavia during the Persian Gulf War ... Rick was able to land interviews with then Serbian President Slobodan Milosevic and Croatian President Franjo Tudjman ... he was also detained in Austria as a terrorist and held at gunpoint for hours. Luckily the authorities realized the mistake.")

Before someone is chosen to enter "The Chamber," aspiring contestants must "face off in a duel of the minds."

"These questions might appear simple," Schwartz explains, "but add the pressure of a face-off and the difficulty increases.

"Kimberly, name the celebrities that have been named 'People's Sexiest Man Alive.'"

Once a contestant has been stripped down and strapped into "The Chamber," the so-called steel hellhole turns to either hot or cold mode. "Hot" equals 150-degree heat, hurricane-force winds, flames, heaters, chair rotations of 360 degrees, sharp chair vibrations, an electronic muscle contractor and earthquake simulation. "Cold" equals 20 degrees below zero, while "cold water is shot at the contestant's face and upper body and frost is released, causing ice to form on the contestant's head." Also, wind, shaking, contractions, etc., etc., blah, blah, blah.

"In its TV ads, which fast food company touts the weight loss of its customer Jared Fogle?"

"America shops at what national retailer that is the exclusive dealer of Kenmore appliances?"

"The name of what brand of bananas is the Spanish word meaning 'little girl?'"

This goes on for seven levels, as long as the contestant's stress level does not exceed a predetermined limit. If it exceeds that limit, the game is automatically over. If it doesn't, the contestant may proceed to the electric shock torture and the swarming insect chamber to answer more questions about Burger King.

By comparison, ABC's "The Chair" looks like a trip to the dentist -- unpleasant, but not so bad after you've emerged from a torture cell -- although it may just seem that way because of the big dentist's chair in the middle of a bizarre set that seems to be part "1984," part "Blue Velvet," part Valentine's Day in an S/M dungeon. In the role of both the good dentist and the bad dentist is John McEnroe, who is hosting "The Chair" for reasons only he and his accountant know.

McEnroe stands behind a golden podium. In front is an odd padded red vinyl backdrop, below a huge monitor where his image is mirrored. From there he makes rather wistful allusions to his days as a holy terror. McEnroe has been roundly panned for his performance as a game-show host, but I'm sentimental and I can't help feeling just like I did when I was 11. Neither can any of the female contestants who are old enough to remember. Which explains why much of the banter revolves around him, and why he seems slightly embarrassed at the attention. One contestant gushes about how her father, a Stanford professor, used to sigh, "Stanford grad," when he watched Mac play.

"I never graduated from Stanford," McEnroe snaps. It's a little awkward.

Anyway, on "The Chair," contestants are strapped into "the chair" with a heart monitor attached to their wrists. Then they are asked questions about magazine titles and McDonald's commercials. Should their heart rates rise above a predetermined level, they are disallowed from answering the question.

Yes, you could see where they would be mad at Fox. But even though "The Chair" is undeniably tame compared to "The Chamber," it is also more fun to watch (John McEnroe! Is anyone else excited?), falling somewhere between a quiz show and a Monty Python sketch. Flames surround contestants at a safe distance, sledgehammers bang together in the distance and occasionally an alligator is lowered over a participant's head. Swarming bees are introduced, but they are kept safely in their cage. Like "Fear Factor," without the fear.

"What rattled me the most was the sound of my own heart beating," one defeated contestant says.

While this must make all those "Chamber" contestants feel really stupid, it's not entirely accurate. The worst thing about both "The Chamber" and "The Chair" is the questions, which demonstrate how faithfully and well Americans are able to answer questions about fast-food commercials while under extreme mental and physical duress. Not only are the days when the quiz show host doubled as pitchman officially back ("Geritol cures tired blood!"), but contestants now pay for the privilege to name that brand in sweat, snot and tachycardia.

I'm just saying think about it.