"Brotherhood of the Wolf" 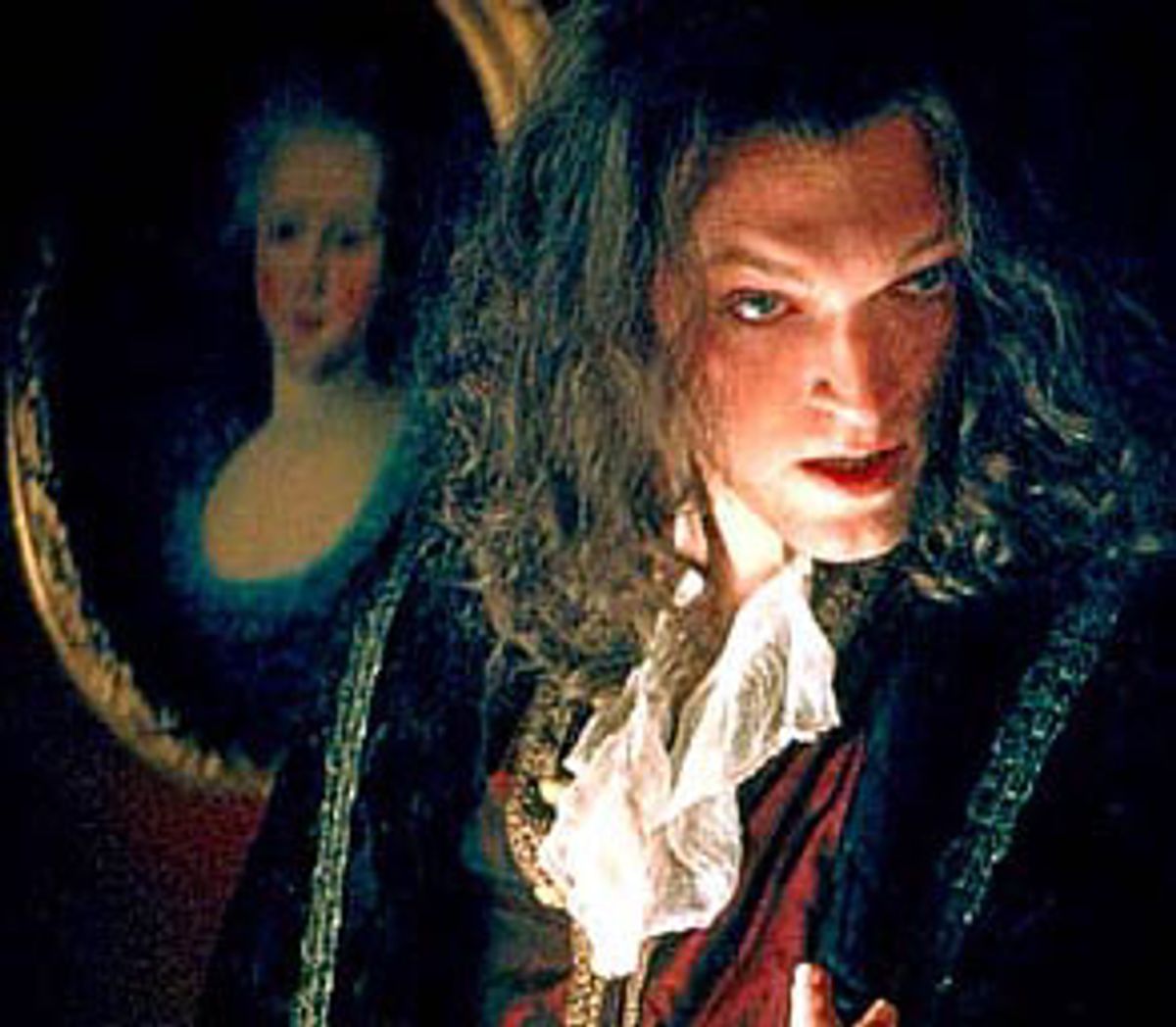 Remember when we used to be able to make fun of the French for their lame pop music? I guess it was never fair, considering how cool Serge Gainsbourg has become in hindsight, but it sure was amusing. With some of the hottest sounds in hip-hop and electronica emanating from le pays des escargots, however, such ridicule is no longer appropriate. Now we have to make fun of French pop culture for other reasons. I went to "Brotherhood of the Wolf" -- an enormous hit in France -- assuming that it would prove, once and for all, that the land of Voltaire, Sartre and Jerry Lewis is no place to make horror movies.

Except that now I have to report, rather sheepishly, that "Brotherhood of the Wolf" is an extraordinary film, although not necessarily a good one. I've never seen anything like it before and I'm pretty sure I never will again. On one hand, we've got a lush erotic drama of pre-Revolutionary France, complete with simpering, perverted aristocrats, hotheaded exotic women with heaving bosoms, rococo interiors and unwashed peasants carrying torches and shouting, "Burn the witch!" Then there's the monster, which looks more like the University of Arkansas' cartoon razorback hog, or maybe the giant hedgehog Spiny Norman from "Monty Python's Flying Circus," than a wolf. Then there's the monosyllabic Native American in touch with nature. Oh, and then there's all the kung fu.

Some wag on the Internet Movie Database has described "Brotherhood of the Wolf" as a Merchant Ivory film with kickboxing, which isn't bad. I was trying out things like that in my notebook during the slower patches of this film, which for all its slo-mo/fast-mo fight scenes, supersaturated colors, grotesque makeup and drugged-out sound design feels painfully long at 142 minutes. Did John Woo and Luc Besson collaborate on a remake of Ingmar Bergman's "Hour of the Wolf?" Is it "Wolfen" meets "Jean de Florette"? "Dangerous Liaisons" meets "The Texas Chain Saw Massacre"? Whatever it is, it's simultaneously on speed and Quaaludes; I don't know if any movie this profoundly insane has been seen in general release since Antonia Bird's Gold Rush cannibal comedy "Ravenous."

Reportedly "Brotherhood of the Wolf" is based on historical legends about a giant killer wolf that terrorized the southwestern French interior in the 1760s, but like most outsiders I know nothing about that. The Chevalier Grégoire de Fronsac (Samuel Le Bihan), a suave nobleman with a taste for natural history, female companionship and rampant ass-kicking, arrives in the remote region of Gévaudan with his stoical sidekick Mani (Mark Dacascos), an Iroquois from Quebec. They're there to hunt the Beast, an unknown predator that has been devouring locals -- mainly the aforementioned tight-bodiced females -- and is variously understood as a diabolical infestation or an attack on the authority of the king.

If all the church vs. state plot intrigue here is pretty murky (and what would an 18th century costume drama be without a mysterious papal emissary armed with various slow-acting poisons?), the point of "Brotherhood of the Wolf," at least for director Christophe Gans, seems to be the excruciating beauty of its moments. Almost a total unknown on this side of the Atlantic (he co-directed the 1994 horror cheapie "Necronomicon"), Gans on a big budget turns out to be an exquisite visionary, if not much of a storyteller. No number of shots in a scene, it seems, is too many; with his crawling camera and compulsive editing and his thundering sound design, he can invest a scene of a hooker playing solitaire with tremendous eroticism and significance. (None of which amounts to anything in the end, but never mind.)

In between his visits to the whorehouse, where a luscious Italian (Monica Bellucci) seems to have designs on him, Fronsac courts the local aristocratic siren, Marianne (Emilie Dequenne), a kittenish flirt with a perfect Cupid's bow for a mouth. Every so often Mani has to demonstrate his awesome Iroquois kung-fu skills on some snarling peasants in fur-lined outfits straight out of "Mad Max: Beyond Thunderdome." They obviously know more about the Beast than they should. Meanwhile, Fronsac is busy being a Parisian rake in the hinterlands, pursuing Marianne and squaring off against her depraved, one-armed brother, Jean-François (Vincent Cassel, one of my favorite French actors).

I haven't even mentioned that "Brotherhood of the Wolf" is narrated by Thomas (Jérémie Rénier), a young writer who watches all this from the sidelines and then calls it to memory years later, apparently while awaiting execution at the hands of a Revolutionary mob. His only role in the story is to ride into scenes and look worried, and later to take peyote with Mani and commune with the wolf-spirits of the forest. (I'm not kidding.)

This film's spiritual-ecological consciousness isn't profound or highly original, but in some sense I respect it. Gans' vision of the 18th century, although bizarre and fantastic, is fueled by a sense of social history; this is a costume drama aware of the extermination of Native Americans and the concomitant destruction of European wilderness and wildlife. Only one thing confuses me: If the aristocrats of the ancien régime were capable of such awesome displays of Shaolin kung fu, how did the peasants ever get them in the guillotine?