There are many reasons to protest this Arnold Schwarzenegger flick about firemen and terrorists. The best one is that it's a bad movie. 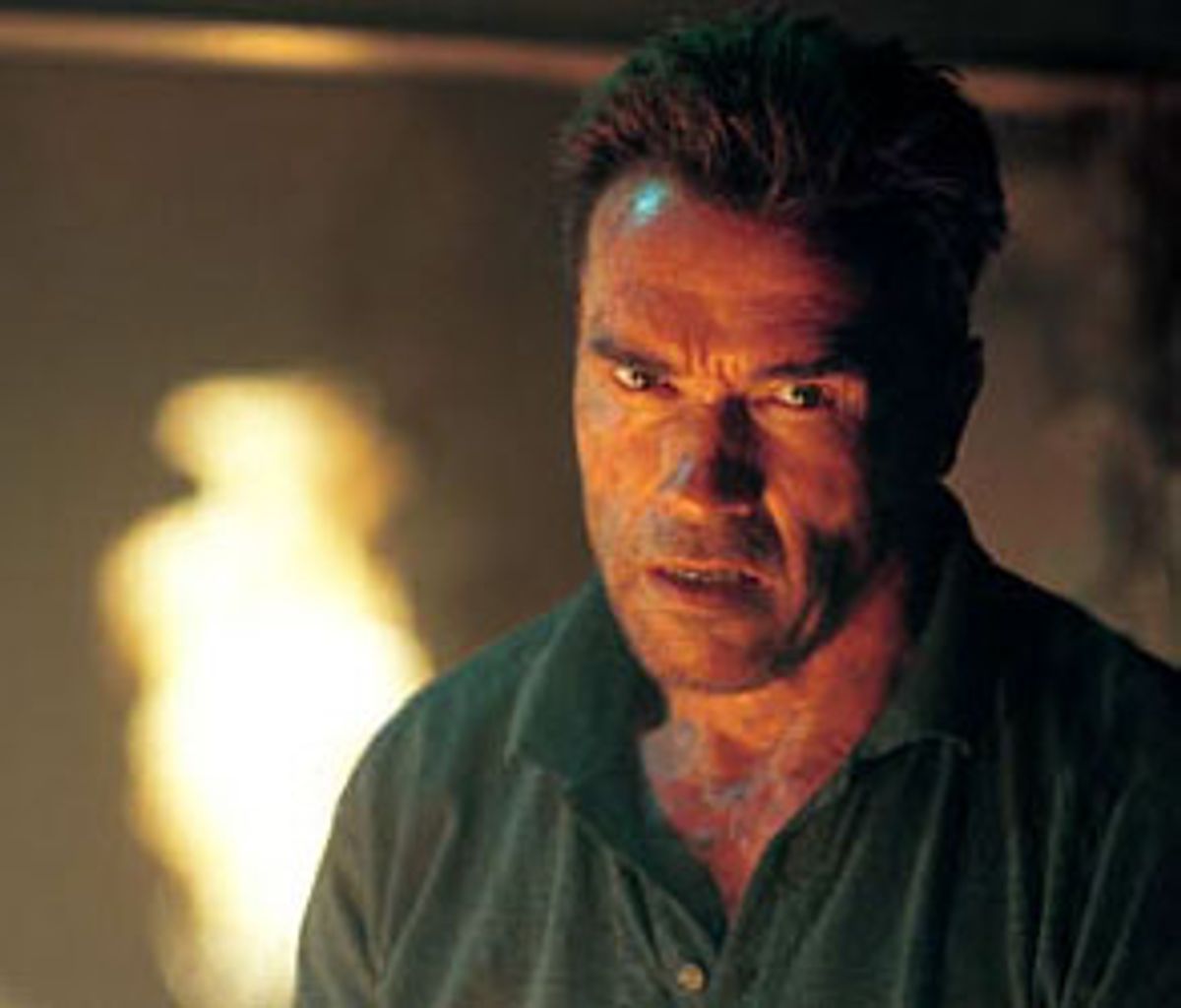 Colombians and firefighters are all worked up about "Collateral Damage," the new action thriller in which Arnold Schwarzenegger saves the United States from South American terrorists with a fireman's ax and the concerned furrows on his monumental forehead. There are also some Catholic priests who are gravely concerned about it, for reasons that evade me. But if we're going to have protests against this movie, I can think of some other groups who might as well get a piece of the action: Canadians, fans of John Turturro and John Leguizamo (whose talents are squandered herein), both foreign policy hawks and doves and the screenwriters of the "Phantasm" horror series.

Come to think of it, Schwarzenegger and director Andrew Davis ought to get out there on the picket lines too. "Collateral Damage" was never destined to be anything beyond a standard-issue action spectacle, energetic in a superficial way but afflicted with the terminal hollowness and vagueness of a Hollywood movie confronting geopolitics. Its accidental confluence with history is nothing more than ugly coincidence, and the extra weight it now seems to carry isn't doing the movie any favors -- as art or entertainment or anything else. Audiences who might have relished "Collateral Damage" as a two-hour escape from anything approaching reality will now be asked, by op-ed pundits and windbag critics like me, to think about it. To the barricades!

Davis is a former journalist with a sharp eye for gritty details and dramatic moments that lend his grand, implausible spectacles a sort of realistic finish. Of course it's ludicrous -- and even, in the current context, grotesque -- that Los Angeles firefighter Gordon Brewer (Schwarzenegger), on his own, pursues the terrorists who killed his wife and son into the heart of the Colombian jungle. But once we're there, Davis almost makes us believe it. In one harrowing scene when a group of bus passengers flee on foot from a bunch of sinister-looking guys with cellphones and AK-47s at a checkpoint -- maybe they're government and maybe they 're rebels; it hardly seems to matter -- the terror and anarchy of civil war are brilliantly distilled.

A few moments later, Gordon plunges down a hillside into a river and then is carried through a gorge and over a prodigious waterfall in an eye-popping sequence that strongly resembles Harrison Ford's famous dam-dive scene in Davis' own "The Fugitive." I guess the man's entitled to rip himself off, but what the scene makes clear is that "Collateral Damage" isn't about terrorism or Colombia or firefighters. It belongs to the closed world of action movies and not to the so-called real world; it's a collection of borrowed scenes, signifiers, attitudes and tropes.

We've got the traumatized American, abandoned by his own government, who goes to war by himself; a Third World country full of cigars, corruption and exotic forms of torture (some guy gets force-fed a poisonous snake!); a vulnerable woman and child in a war zone; a mean-spirited, imitation-Hitchcock plot switcheroo; and a villain who is apparently impossible to kill. (And, as I will mention for the second and final time, the following dialogue lifted, perhaps unconsciously, from the "Phantasm" films. Hero, preparing to vanquish Unkillable Villain: "It's over!" Unkillable Villain: "It's never over!")

Schwarzenegger has been making movies for a long time now; he's a pretty good actor until he opens his mouth. Early in the film, after Gordon is injured in the downtown Los Angeles bombing that kills his wife and son, his portrayal of a regular guy who has lost everything he cares about is surprisingly moving. Of course, you have to wonder why some guy from L.A. named Gordon talks like a Tyrolean robot, but that's par for any Arnold movie.

"Collateral Damage" quickly plunges into boggy terrain from which it can never extricate itself. A CIA agent with a sort of mangy, flea-bitten appearance (Elias Koteas) tells Gordon that, in the interests of peace negotiations in Colombia, the U.S. government won't go after the guerrilla named El Lobo, who apparently carried out the bombing. In the twinkling of an eye, of course, Gordon finds himself in a Colombian prison with no passport or visa or weapons, right next to a Canadian sex fiend (John Turturro) who is in the movie for no reason at all. Not only is Turturro about the last person I would pick to play a Canadian -- and, yes, I recognize that Canadians come in a glorious panoply of colors and ethnic heritages -- but he has to utter the line: "Put a sock in it! I'm just a wrench for hire!"

At least John Leguizamo seems to have a good time with his stereotypical role as a backwoods cocaine lord who briefly takes Gordon under his wing, quipping his way through a few scenes that feel like improvised departures from the ponderous script by brothers David and Peter Griffiths. "Hey, your English is pretty good for a German guy," he tells Gordon (who is passing himself off as a German mechanic). When Gordon realizes the nature of his business, Leguizamo is halfway apologetic: "Yeah, I know, I know, I know. Just 'cause I'm brown and down don't mean I want to work for minimum wage."

Leguizamo's role isn't half as offensive as that of Cliff Curtis, who plays the guerrilla leader Claudio, or "El Lobo," as a Che Guevara wannabe laden with histrionic gestures and pseudo-revolutionary pronouncements. "Americans are obsessed with false family values," he announces in his Frito Bandito accent. "They have forgotten the reality of war." I'm all in favor of colorblind casting, I guess, but Curtis is a New Zealander who seems only to portray swarthy ethnic villains; he has played Arabs in "The Majestic," "The Insider" and "Three Kings."

A well-timed guerrilla attack allows Gordon to escape both the Colombian government and Koteas' renegade CIA operation. He winds up imprisoned again in Claudio's camp, where Claudio's wife Selena (the Italian actress Francesca Neri), who apparently regrets the movement's turn to violence, pleads for his life. Don't worry, I haven't given away much of anything; all this happens before the major characters pick up stakes again and move to Washington, where Claudio plans to launch a major bombing campaign against the U.S. government.

Fundamentally, "Collateral Damage" has a divided spirit that doesn't serve it well: Davis is an action filmmaker with a brooding, somewhat cynical worldview, while Schwarzenegger can and should only play Herculean superheroes who vanquish evil with one arm and shelter women and children with the other. In ordinary circumstances, this would come off as a jumbled, middling adventure movie, neither the best nor the worst entry in either Davis' or Schwarzenegger's career, a diverting placeholder for fans who await "Terminator 3." But these aren't ordinary circumstances: Wounds are still raw, families are still grieving and Americans still hunger for retribution. Protests and box-office bonanza aside, "Collateral Damage" still doesn't mean a thing.