NBC's jingoistic provincialism is missing what the Olympics are all about -- but the Games will prevail. 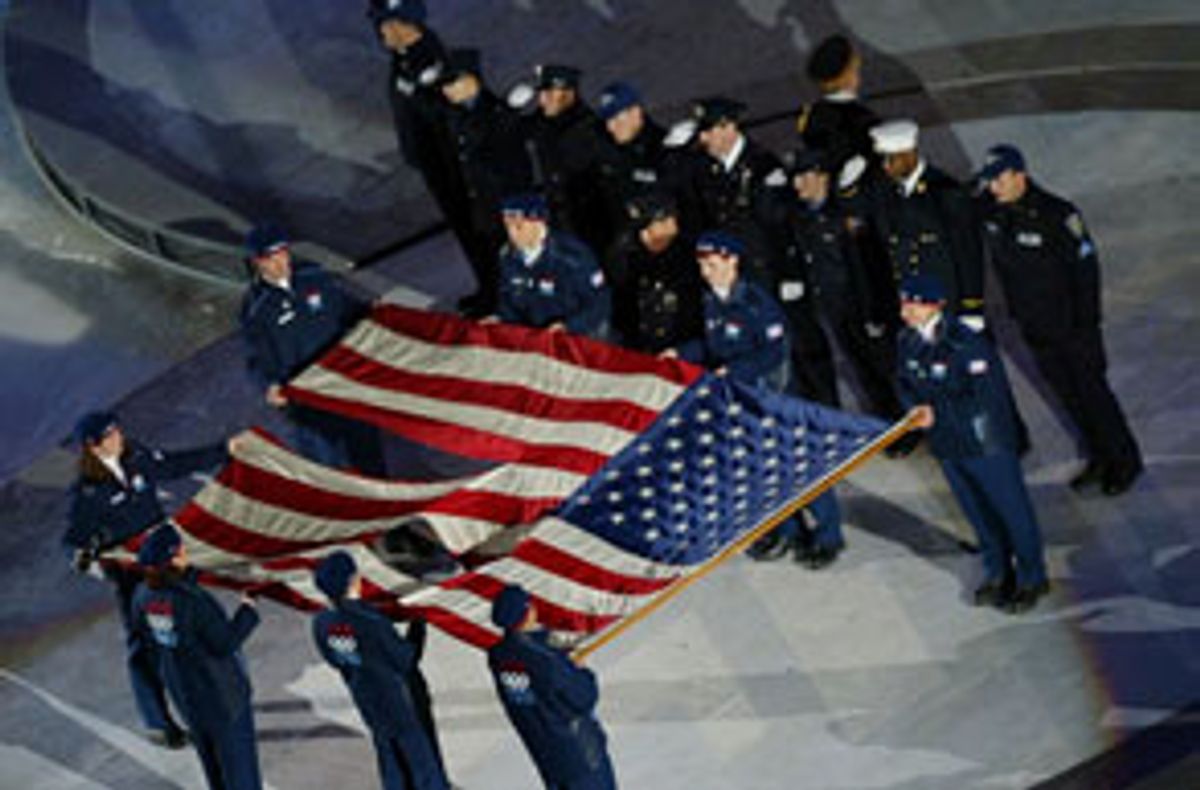 The Winter Olympics have made it through NBC's parochial, flag-waving take on the Opening Ceremony, and it ought to be all downhill from here.

The Salt Lake City Games are in their second full day, and the drama's already in high gear. That's inevitable. Every Olympics is the athletic equivalent of a newly discovered play by Shakespeare -- you know it's going to be great, you just don't know how. From the miracle silver medal of Home Depot's most illustrious alum, speed skater Derek Parra - sending thousands in the Low Countries gliding disconsolately over the canals -- to the tiny Italian cross-country skier Stefania Belmondo, overcoming a broken pole to kick to a thrilling victory in the 15K, to the balletic elegance of the top Russian pairs skaters, to the determined Finnish skiers who shook off the doping scandal that rocked their small nation to take the gold and silver in the Nordic Combined, we've got Games. And NBC is doing a fine job of bringing us the action.

But would someone remind whomever is in charge over there that the Olympic Games are an international event? One would have thought this was obvious, but it apparently hasn't sunk in at the Nativist Broadcasting Company, which on Friday night pandered to the lowest common denominator with embarrassingly USA-centric coverage that made the Olympics seem like America's Salute to Itself. If there were an Olympics judging committee for broadcasting, the network would be disqualified for doping the American people. The Games, and the American public, deserve better.

The red-white-and-blue note was struck from the very beginning of the prime-time broadcast, as NBC rolled out a lugubrious introductory piece whose obligatory assertion that Sept. 11 has changed everything forever, combined with the fact that the accompanying film was mostly of American athletes, set a tone of blinkered patriotism. As sweet old Jim McKay, whose emeritus status as voice of the Olympics made him the requisite choice for the quasi-official pronouncement, informed us that the "sweetly serene Games of Sydney" were "ceremonies of innocence we may never see again," an American equestrian gold medalist appeared on the screen. I attended every day of the Sydney Games, and I can safely say that that four-legged triumph, while no doubt memorable in its own way, was not one of the deathless moments of the XXVII Olympiad. Apparently in warlike times it is important for Americans to see a man on a horse.

A few moments later, following dark allusions to Sept. 11 and shots of firemen, we suddenly found ourselves in full patriotic newsreel mode, as McKay intoned, over music that suddenly swelled into full martial-inspiration mode, "In defense of liberty, [America] summoned a call to arms." We were mercifully spared shots of cavalrymen charging up the slopes of San Juan Hill.

The narrative eventually wandered back to the properly Olympic tone, ending with the affirmation that "what unites us is far greater than what divides us." But the message had been sent loud and clear: What the Olympics is really about, for reasons in which Nielsen ratings and patriotism play an equally important role, is America. America the wounded, America the heroic, America the triumphant, America the country that provides the only athletes we are really interested in - American athletes.

This just in: It is now time for quasi-official messages of national healing that accompany major sporting events to come to an end. Such messages have increasingly begun to take over the tragedy they attempt to commemorate -- the reality of Sept. 11 is buried beneath a mountain of red, white and blue treacle. The Super Bowl was bad enough (the Budweiser Clydesdales bowing their heads at the New York City skyline was offensive kitsch beyond the most fevered imaginings of Milan Kundera), but the Olympics is the last straw. Let our tragedies be our tragedies, and our ceremonies of innocence be our ceremonies of innocence. They really don't have anything to do with each other. When we come to the point where we'll never see that innocence again, we'll know it. Just ask the people of Sarajevo.

In the meantime, it would also be nice if the networks took the audacious step of reaching a little higher, trusting their audience to be a little smarter, in their coverage of the greatest sporting event in the world. (The Winter Games take silver behind the Summer Games' gold for that title, but they're still the Olympics.) Clearly, whatever network broadcasts the Olympics is terrified that unless it constantly runs teasers about how Joe Shmoe from Kokomo, N.Y., will be competing next, they won't make as many gazillions of dollars as they planned. The nadir of grubbing for eyeballs was reached during a tease hyping the showdown between the Canadian pairs skaters and their favored Russian rivals. After reminding us that the Russians haven't lost in pairs in 40 years, the voice breathlessly asked, "Can North America take home the gold?" When the Great White North is enlisted as honorary Americans (what's next -- can Baffin Land stave off the Soviet threat?), you know the serious hard sell is on.

Viewership is a valid concern, and it would be unrealistic to suggest that American TV run a majority of its segments on foreign athletes. But the America-first nature of the coverage has become egregious, to the point where what the Olympics are about is lost. There's some sentimental lip service paid to the Olympic spirit, but corporate imperatives (i.e., cash) inevitably trump it. This doesn't just degrade the Olympics and miss an opportunity to help Americans become better world citizens; it may not even be good business. The Olympics are unique. Turn them into the Poulson Weed-Eater Fiesta Bowl with a few foreigners thrown in, and how long will people even care about them?

Don't get me wrong. I can cheer my countrymen on with the best of them. But I prefer my sports patriotism to come naturally, without the helping hand of a corporate mass-media entity acting in a queasy-making double role as healer of America's wounds and purveyor of America, the brand. And I would like to know enough about some of those Austrians and French and Russians to be able to cheer them on, too.

I feel so strongly about this because I attended the last two Olympics, and the way American TV covers them simply doesn't capture their wonderful, chaotic, 24-ring, international-circus quality. When you're actually at the Olympics, you realize that America is just another shmoe of a country, having points taken away for Half Pipe Amplitude on the snow and being beaten out for the Italian babe by Slovakia in the bars. Fortunately, as the Games develop, even TV watchers can't help but get a sense of this, and the other things that set the Olympics apart -- the sportsmanship, the camaraderie, the brotherhood-of-man idealism, the corny and moving time-out from the world they represent.

The Opening Ceremony invoked those qualities as Opening Ceremonies always do, with a mixture of the stirring, the head-scratching and the silly. Four years have gone by -- it must be time for another Allegory of Man's Quest for the Fire Within produced by Holiday on Ice! The highlights of the show were the spectacular animal sculptures and the invocation by Utah's original Native American tribes (which summoned up Australia's homage to its Aborigines in its memorable Opening Ceremony ). The heavily guarded secret of the U.S. hockey team from Lake Placid lighting the torch was an OK touch, although I'm not convinced that even that all-time upset is quite worthy of the epic significance it's being saddled with. Lowlights were the choice of Steven Spielberg to represent American Culture (dozens of derisive Ph.D. theses are being prepared about this in Paris even as I write) and President Bush glaring stony-faced as the Iranian athletes walked past. (Maybe Iran should introduce a new move into the Moguls competition to go with the Helicopter and the Iron Cross -- the Axis of Evil!)

Somewhere in its own weird zone was the white-knuckle-inducing performance of beloved old Jim McKay, who stumbled over his live opening exchanges with Bob Costas and Katie Couric so badly (it's never a good sign when you follow an unintelligible statement by mumbling "that's an expert comment") that the producers in the booth must have feared he had suddenly come down with acute Alzheimer's. Fortunately, the broadcasting legend -- with the whole country rooting for him, as well as the gracious Costas and Couric -- pulled himself together as the evening went on. He may not be as articulate as he once was, but he gets what it's all about, and he can still share it.

But the real highlight, as always, was the march of nations, the stately entrance and triumphal procession of the youth of the world, hopeful competitors from Finland and Greece and Spain and Israel and Iran and Kazakhstan, all of them cheered on by an audience that, if my experience with Americans at Nagano and Sydney is any indication, understood what the Olympics are all about.

Forget doping scandals, IOC corruption and made-up sports -- the Olympics are something it just doesn't make sense to be cynical about. They are an every-four-years oasis in which we get to pretend that we are all brothers and flags are just decorations. But pretending, like playing, is not entirely frivolous. The Olympic world is one innocent and overflowing enough that we can afford to honor with solemn rites those who excel in the simplest feats, the ones that connect us with animals and so connect all of us together: the strongest woman, the fastest man. The Games are competition as celebration, and what is celebrated is humanity. Even if the sport in which that celebration is manifested is as peculiar as Half-Pipe Skiing -- more on these X-Game sports later -- that's a good thing.

I couldn't make it to Salt Lake City this year -- long story, something to do with the NASDAQ and a bad bar scene -- so my colleague King Kaufman and I will be performing the arduous task of filing daily dispatches from our front-line positions in dueling La-Z-Boys with beer holders pulled up in front of large-screen TVs. Stay tuned to this Web site for thrilling secondhand accounts, caustic, ill-informed commentary and more, as the Games roll on.