You mustn't miss a minute of the Olympics, the network says, unless we can save a few bucks by you missing a whole day. Plus: Ohno, hockey and more. 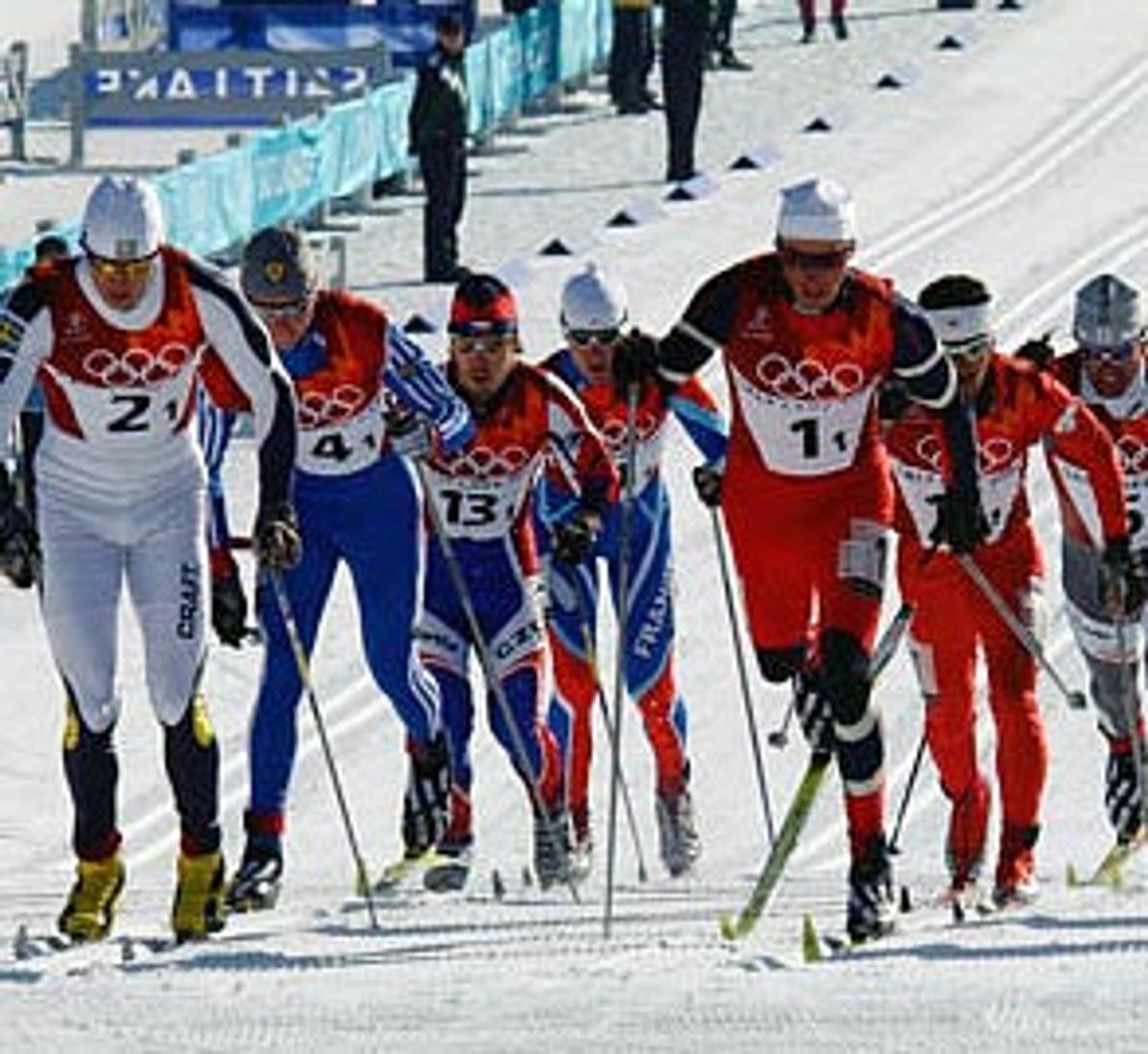 I'd been planning to give NBC fairly high marks for its Olympics coverage. We saw so little actual athletic action, almost none of it live, in the Sydney and Nagano Games that even the relatively few hours of live programming we're getting this time around seems like a bonanza by comparison.

There are still way too many crappy, syrupy, clichéd canned features about the athletes, each of whom, apparently, spends his or her days staring into the middle distance and walking around in slow motion while "The World's Greatest Elevator Hits, Volume XIV" whines in the background, and each of whom has overcome some sort of tragedy (many of which seem a bit trumped up: "Bad hair days continued to plague Irina, and she finished out of the medals in three straight world championships") only to emerge stronger, more focused and just happy to be here at the Olympics, medal or no, a sentiment that seems to me to sap some of the drama out of the competition but apparently plays well in the all-important female 18-49 demographic.

And there's too much emphasis on the Americans, of course, but I'm a grown-up and a realist and I get how the world works. I am not going to be an astronaut, there will not be peace in our time and the network broadcasting the Olympics in the United States is going to make it seem like only Americans are competing.

But I'm going French judge big-time on NBC after Sunday, when the Peacock censored the Olympics so that it could squeeze every last dollar out of the Daytona 500.

There was men's cross-country relay skiing -- hyped in NBC promos as one of the Olympics' most dramatic events -- men's and women's curling, women's super G skiing, women's hockey and two-man bobsled going on, but we didn't get to watch any of it.

Why not? Well, like I said, I'm a grown-up and a realist. I get how business works. NBC didn't want the Daytona 500 to drag down the Olympics' ratings, and it didn't want the Olympics to do the same to the Daytona 500. A television network promises advertisers a certain rating for a certain show, and if the network doesn't deliver the audience, it has to give something back, like free advertising later. So no Olympics while the race is on.

But you can be a realist and still get angry. NBC has spent the last year or so telling us that the Olympics are a "must-see" type of event. You won't want to miss a minute of it! Unless, of course, you missing a minute of it, or a whole day's worth of it, keeps us from having to discount some ads on "Law & Order: Crossing Guard Unit" this spring. In that case, screw you and your Olympics nonsense. You'll watch the Daytona 500 and like it.

A disappointing 2.1 score for NBC from the grumbling American.

And now, in honor of the Olympic rings, five more observations and five questions as the Olympics head into their second week:

Question 1: What is General Motors thinking with its Chevrolet advertising campaign where two weenie-ish reps manipulate the TV coverage to show the Chevy logo and slogan at all turns? There's one where the guys in windbreakers ask figure skater Michelle Kwan to stand just so at the end of her routine -- so her hands frame a Chevrolet banner in the TV shot -- and another where they slap each member of the U.S. men's hockey team on the back as Brett Hull and the boys take the ice, not realizing that they've now got Chevy logos on the backs of their sweaters. Even the officials get the bow-tie on the back treatment.

So Chevy is portraying itself as a company that will rely on deception to further its cause of commercializing sports, something that, even when it's done on the up-and-up, is annoying to fans. This is supposed to sell cars? Maybe I don't get how business works.

Observation 1: I saw something on Saturday at 8:20 p.m. EST that I hadn't seen before at these Games: a black athlete. His name was Garrett Hines and he was the back half of a two-man bobsled team, which strikes me as being about as glamorous as being the back half of a two-man horse costume -- you push the sled for a few yards, then jump in and duck down behind the driver, getting a great view of his back half and becoming invisible to spectators -- but I suppose it's honorable work.

Seeing my first black face -- there may have been others evident whom I missed -- eight days into the Games brought home to me how white the Winter Olympics are, and I don't mean the snow and ice. I would be a better person if I had noticed this eight days earlier. And I don't quite know what to do with this observation. But there it is: The Winter Olympics sure are white.

Question 2: Do blacks watch the Olympics in significant numbers?

Question 3: This is a dumb question, but why do aerial skiers, who go 50 feet straight up in the air when they go up that ramp, not get hurt when they land? Why is it not like falling out a fourth-floor window and landing on your feet? Or is it?

Observation 2: How great is Gary Thorne? I know that looks like a question but it's rhetorical, so it counts as an observation. The answer is that ESPN's main hockey announcer is just plain great. He has a great voice, a great accent (Maine), a great command of the game and great rapport with his sidekick, John Davidson. He does baseball and basketball too, but he's been so good for so long as the voice of ESPN's hockey broadcasts that his voice just sounds like hockey to me now, the way Keith Jackson's voice sounds like college football. He's a lawyer, so you can insert your own wisecrack here, but I love the guy.

Observation 3: I also love those Office Depot commercials where Kathy Ireland tells those two biddies on the sidewalk that, actually, it's perfectly fine to wear white after Labor Day -- and it's not just because Kathy and I used to kind of go out. Because we didn't. It's because I'm the founder and only member of EGWE, which stands for Everything Goes With Everything, which is dedicated to the principle that you can pretty much wear what you want when you want, and it doesn't matter if those two cows who work down the hall and never once ask you to lunch whisper that, say, your red blazer clashes with your burgundy pants. I'm thinking that with Kathy on board, our membership will jump.

Question 4: China's Yang Yang (A) won the women's short track speedskating 500 meters Saturday. She is called Yang Yang (A) to distinguish her from her teammate, Yang Yang (S). They are the only people I've ever heard of who have parentheses in their names, but I assume the parentheses are for American media purposes only, and aren't actually part of their names.

After her win, Yang, who has dominated her sport for the last five years, talked about psyching herself back up after losing in the 1,500 meters, in which she was a favorite. "I told myself, 'You are Yang Yang (A), you have won five world championships,'" Reuters quoted her as saying. "I felt really embarrassed. Before the 500 meters I told myself, 'I am Yang Yang (A)' and to race Iike I did before."

Does she actually refer to herself as "Yang Yang (A)" or was that a loose translation?

Observation 4: Some people were worried that the Olympic "Dream Team Tournament" wouldn't live up to the hype. After that U.S.-Russia game Saturday, which ended 2-2 after Hull tied it late in the third period on a wrister that beat goalie Nikolai Khabibulin, we can safely say it's not hype.

It's no secret that Olympic hockey is a superior product to NHL hockey. With the wider ice and no two-line-pass rule, the emphasis is on skating, shooting and puck-handling skills, not defense. Add to that anti-fighting rules with teeth in them, which prevent the boring brawls that drag down so many NHL games, and the lack of TV timeouts -- the NHL would fold sooner than adopting something similar -- and it's no contest.

I'd put up with that figure skating chazerai every winter if it meant I got to watch Olympic hockey too.

Observation 5: Watching the men's short-track 1,000-meter speedskating final in which American dreamboat Apolo Anton Ohno and all but one of his competitors wiped out crazily just before the finish, it occurred to me that some sports are played on fields that are too large and some on fields that are too small, and of the two I'd rather watch the latter.

Short-track is a crazy sport in which it's apparently common to get taken out of a race through no fault of your own, as happened to Ohno Saturday. He was leading just steps from the finish line when China's Li Jiajun jostled him while trying to pass. The resulting crash wiped out everyone except Australian Steven Bradbury, who had hit upon the successful strategy of trailing the whole field by 50 feet or so, thus avoiding the carnage. Bradbury won the gold, Ohno crawled over the line for the silver.

Bradbury had made it to the final after a similar crash wiped out the leaders in his semifinal. He's sort of the Gerald Ford of these Olympics, just kind of cruising along when -- whoa! I'm at the top of the heap!

Anyway, in short-track, skaters whiz around a hockey rink, which is too small to whiz around. The big star of this sport isn't an athlete, it's centrifugal force, heretofore a journeyman player in the physics league. But that too-small playing area makes it exciting as hell, because it seems at every single moment of every single race as though the whole thing's going to blow up in a tangle of sliding, spinning, cat-suited bodies.

Contrast that with soccer, which is played on, in my opinion -- and fair warning: It's still going to be my opinion after I've read all of your angry letters -- too large a field, which results in a lot of snooze-time. You can safely turn your back on a soccer match for quite a good little while and know you won't miss anything important. You can't turn your back on short-track for a second, and that's a pretty good measure of how entertaining a sport is.

Question 5: Should I take up short-track? Because I think I can skate even slower than Steven Bradbury.