Fox's "Greg the Bunny" offers cheap, hilarious gags on the set of a fake PBS "edutainment." Can it survive the single-camera sitcom curse? 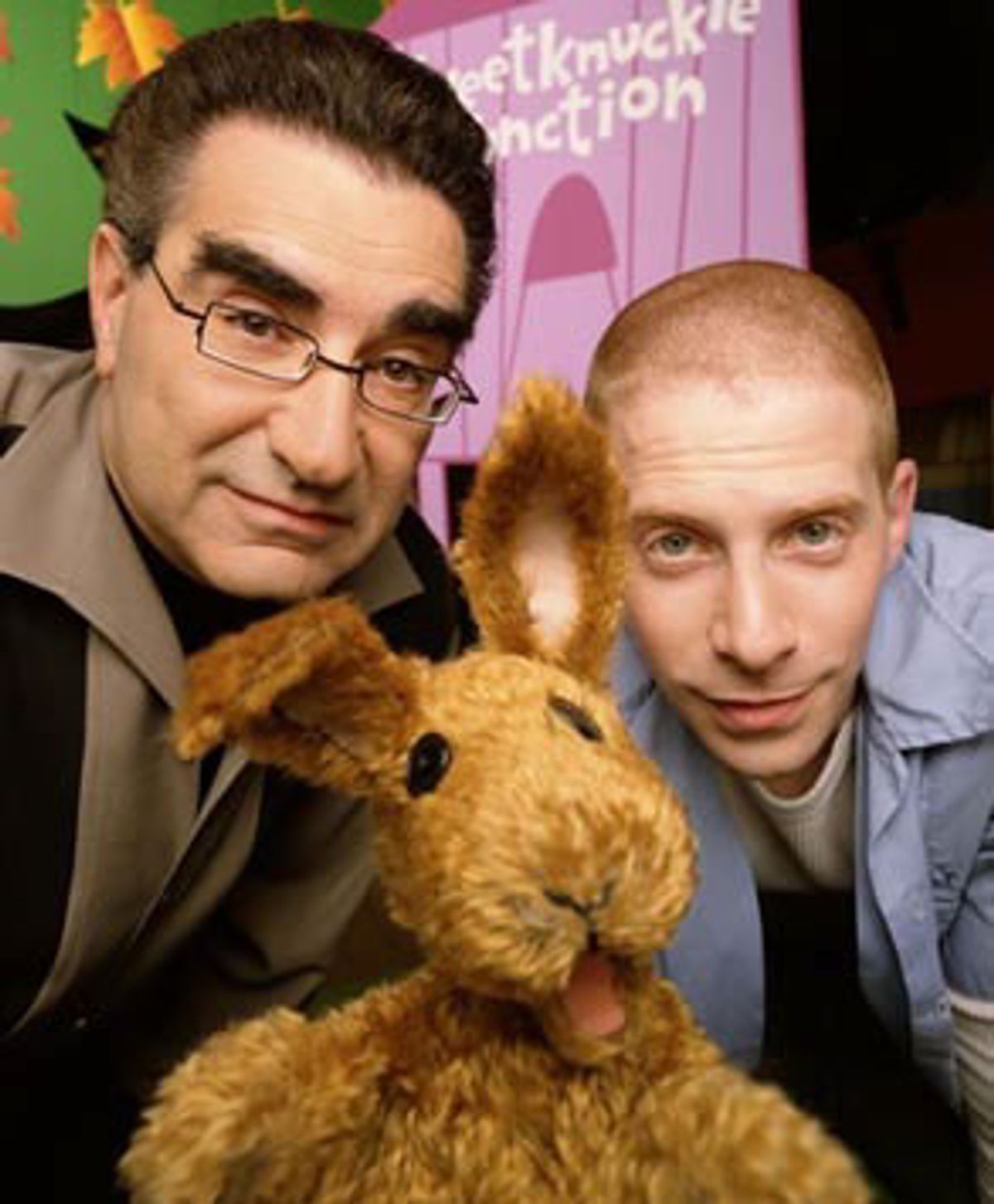 If you like your comedy absurd, snarky and knowing, then the thriving genre of network TV parodies is for you. Like "The Larry Sanders Show" and a slew of less memorable TV self-mockeries, Fox's "Greg the Bunny" and ABC's "Wednesdays 9:30 (8:30 Central)" tilt at the legendary ego problems, rampant insecurities and high-camp high anxiety behind the scenes of your favorite network product. "Wednesdays 9:30 (8:30 Central)" sends up two of the networks' most bizarre practices in the clumsy title alone: first of all, the custom of shuffling shows from time slot to time slot, as if running a subway shell game on viewers, and secondly the penchant for clunky, hard-to-promote titles like "Two Guys, a Girl and a Pizza Place" and "It's Like, You Know."

"Greg the Bunny" creators Dan Milano, Spencer Chinoy and Sean Baker first introduced the character of Greg in the cultish New York public-access show "Junktape," about a neurotic stuffed rabbit living in the East Village. Later, Greg appeared in a series of short films on the Independent Film Channel. In his newest incarnation, the spiffed-up Greg -- his button eyes replaced, at least in some scenes, by a pair of limpid chocolate pools -- introduces us to life on the set of "Sweetknuckle Junction," a fictional PBS children's edutainment show on which Greg has landed the starring role after its original lead, Rochester Rabbit, is fired.

Despite its warm and furry exterior (the cast and crew are made up of equal parts human and foam-based life forms), "Sweetknuckle Junction" is a hotbed of petty rivalries, niggling jealousies and unchecked substance abuse. And that's just the puppet stuff. The show's humans are every bit as talentless and insincere as we've come to expect from people who play network suits on TV. The "Sweetknuckle" ensemble begins with Dottie Sunshine (Dina Waters), a dumb blonde in a dirndl who vacillates between imperious pronouncements she can't quite pull off in her tremulous voice ("I will not be dismissed!") and total submission. Then there's Junction Jack (Bob Gunton) a sweet Mr. Greenjeans type on screen who snaps back into his cantankerous, chain-smoking Vietnam-vet persona the instant the director yells "Cut!" The puppet cast includes Warren "Professor Ape" Demontague, a pretentious, pill-popping, bug-eyed monkey who adopts a phony English accent when he thinks he's about to be replaced and announces: "Well, the joke's on you, you godless bloodsucker. I'm an actor. I have range. I don't need your insipid little moppet show").

There's also Count Blah, an older, bitterer version of the Counting Count on "Sesame Street"; a retarded, crayon-eating frog; a pre-op transsexual monster with big boobs; and, back in the human realm, Alison Kaiser (Sarah Silverman), a slick network exec whose reaction to the imminent cancellation of her show is "I need to get married." (The gay bear who tries out for the lead when Rochester gets sacked doesn't get the job.) It's no secret that television writers are the sworn enemies of development execs, so shows like "Greg the Bunny" and "Wednesday 9:30 (8:30 Central)" are either testaments to the suits' ability to laugh at themselves, monuments to their blinding narcissism, proof of their fabled cluelessness or a cruel joke they play on the writers whose shows will soon be canned.

They who giveth, after all, also taketh away, and given the fate of some of the weirder, more innovative comedies to have sped by the screen lately ("The Tick" is gone, "Watching Ellie" has been temporarily shelved and "Undeclared" will probably remain un-renewed) any fondness for "Greg the Bunny" should probably be tempered with realistic forecasts of its chances. Mixed critical reactions aside (and a glance at the recent sitcom death toll suggests that there's nothing like a bunch of good reviews to kill a series), the rabbit's future doesn't look so bright. After all, the audience most likely to embrace "Greg the Bunny" is probably still mourning the passing of "The Tick" after just eight episodes. So, in the interest of not precipitating any untimely demises, let's just call this a good review within a bad review of a good TV show about a bad TV show.

Some reasons "Greg the Bunny" may not last (i.e., why I hope it does):

No. 1: It's flagrantly stupid.

If you can't be flagrantly stupid on TV, where should you go? "Greg the Bunny" is the dumbest thing you ever saw, in a good way. From the show's title to its drug-induced premise to the bouncy way the puppets have of walking, it rarely gets sillier than this. Greg lives with his best friend Jim (Seth Green), an underachieving pool boy who also happens to be the son of "Sweetknuckle Junction's" director, Gil Bender (Eugene Levy). Greg, who has had trouble finding work, convinces Jim to ask his dad to hire him as an assistant. After mangy Rochester is fired, Greg shows up for his interview and Gil mistakes him for an auditioning actor. Greg's improvised ode to snowballs clinches the deal. Do you think you might like watching a stuffed animal bounce around singing, "Snowball, I'm in love with you! Snowball, you complete me!" while Eugene Levy and Sarah Silverman look on, smiling and toe-tapping?

No. 2: It's cheerfully offensive.

OK, so shows about TV shows have been around since "The Dick Van Dyke Show." But "Greg the Bunny" takes the well-trod TV parody premise a little further, spoofing the sensitive but really boring issue of "negative portrayals" of minorities in the media. On "Greg the Bunny," puppets live among humans in not-so perfect harmony.

"Fact," Greg announces at the beginning the premiere episode (which aired Wednesday night): "There are 3.2 million puppets, or as we prefer to be called, fabricated Americans, living in the United States today ... and yet most people would rather chamois their cars with us than have us date their daughters." As they are reduced to reminding us in the show's theme song, "We can sing and dance, but we don't need pants ... See, we're just like you!"

Like most minority thespians, Greg and his costars are sick and tired of being typecast and excluded from most roles. In one episode, Greg fends off a couple of puppet-bashers and gets his name in the paper, attracting the attention of a flamboyant Al Sharpton/Jesse Jackson-style advocate named Herberta Hymena (or something), who convinces Greg to return to his "puppish" roots by wearing traditional clothing (feathers are involved) and rewriting "Sweetknuckle Junction" scripts to make them more pro-puppet (i.e., not funny). "I am perturbed by the way puppets are portrayed in your program," he tells Greg. "And in your position of prominence, you need to penetrate and personify proper puppet power! Perhaps you need to ask yourself what is edutaining? Is it fleshy propaganda? And then you need to answer yourself, yes! Keep the boat afloat!"

No. 3: It's unapologetically insiderish.

"Sweetknuckle Junction" may be an adorable and educational "Sesame Street" knockoff, but behind the scenes, it might as well be "Dynasty." The show's star, Rochester Rabbit, is unceremoniously dumped after Alison tells Gil to choose between firing him and canceling the show: "We need to find the next Elmo if we are going to reach a younger audience."

As Gil points out, "We're already reaching 4-year-olds. How young do you want to go? Fetal?"

But Alison is unmoved. "Hey, I'm as sensitive as the next person ... But his fur is thinning, his ears are drooping ... it's gross."

Later, when Gil finds out that Greg is not an actor but his useless son's friend, he freaks out ("Is the gay bear still available?") and tries to fire him.

"Let me tell you something about television," Gil tells his son. "I vouched for him! I expressed an opinion! It's the kind of thing that ends careers in this business."

It's not like we haven't seen television drones portrayed as cowardly, sycophantic and desperate before. We've just never seen it with puppets. When Greg refuses to change out of his puppish outfit in the third episode, Gil says, "Your outfit makes a political statement, and it'll make it look like the network has an agenda."

"Of course we do," Alison replies, "we just do it passively."

Like seemingly every midseason-replacement sitcom these days, "Greg the Bunny" is filmed with a single camera and without a laugh track. This show benefits especially from single-camera technique, given hand puppets' general lack of lower extremities. The single camera allows for chase scenes and unexpected angles that may distract you from the sometimes implausible spectacle of Seth Green conversing soulfully with a bobbing bathmat, and also allows the puppets to venture out into the world. On the down side, this technique is in danger of being thrown out with the canceled-show bathwater; a slew of single-camera sitcoms have already been consigned to oblivion or are halfway there.

The good news is that "Greg the Bunny" has enough wrong with it to stand a chance at survival. Some things that are wrong with it (i.e., reasons it may last longer than "The Tick"):

When Rochester threatens to kill Greg on the set of the show, Count Blah tries to talk him down.

"Give me one reason why I shouldn't," says Rochester.

So, even though "Greg the Bunny" looks cute, it's not really for the kids. The jokes are broad, raunchy and as scatological as possible. In the second episode, Warren Jack and Count Blah leave their paintball game to rescue Greg from the evil dog of Jimmy's domineering new girlfriend, Chelsea.

"What do people see in these things, anyway?" says Warren. "If I wanted someone to lick my face and poop on my lawn, I'd get back together with Farrah Fawcett."

Chelsea and Jimmy come back to find that Greg, Jack and Warren have castrated the evil dog and stuffed his bereft scrotum with commemorative Sammy Davis Jr. fake eyeballs that play "Mr. Bojangles" when they move.

Chelsea yells, "You must have been taunting him!"

Greg replies, "You should be a rape counselor."

No. 2: There's hugging and learning.

After a half hour of testicle jokes, water balloon-as-breast jokes and "drugs destroy dream" jokes, "Greg the Bunny" always ends on a suitably heartwarming sitcom-y note about the importance of friendship and the power of standing up for what you believe. If you're an oppressed puppet who is a role model to fabricated Americans everywhere, this is especially important.

No. 3: It takes a great cast and miscasts half of it.

Aside from Eugene Levy, the stellar cast of "Greg the Bunny" could be better used. The brilliant Sarah Silverman, in particular, seems woefully limited by her role as a dim, humorless network suit with only a smattering of wry lines in the first three episodes. (The pre-op transsexual monster gets some great ones, on the other hand.) Silverman is famous for her potty mouth and outrageously un-p.c. jokes (she recently got in big media trouble for a telling a misunderstood "chink" joke that was meant to be a slur of racial slurs on Conan O'Brien), but her "Greg the Bunny" character is unbuttered melba toast.

As Alison, Silverman plays one note, and while it's a good note -- an unctuous reptilian insincerity -- it's still only one. Maybe it's because she's tall, slender and pretty, but Silverman, whose stand-up comedy is a filthy revelation, seems to be forever consigned to attractive-brunette roles. She would have been much more fun as Dottie Sunshine. Come to think of it, the flighty, vulnerable Waters (who plays the funeral- and David-obsessed rich girl on "Six Feet Under") would have been pretty funny as the network bad guy. The sparky Green also seems underused in his role as the couch-dwelling sidekick to a cute throw pillow. Maybe what he needs is a job on "Sweetknuckle Junction."