Adam Sandler might be a schlub, but he's not a small-town schlub. In this Frank Capra remake he's not really funny either. 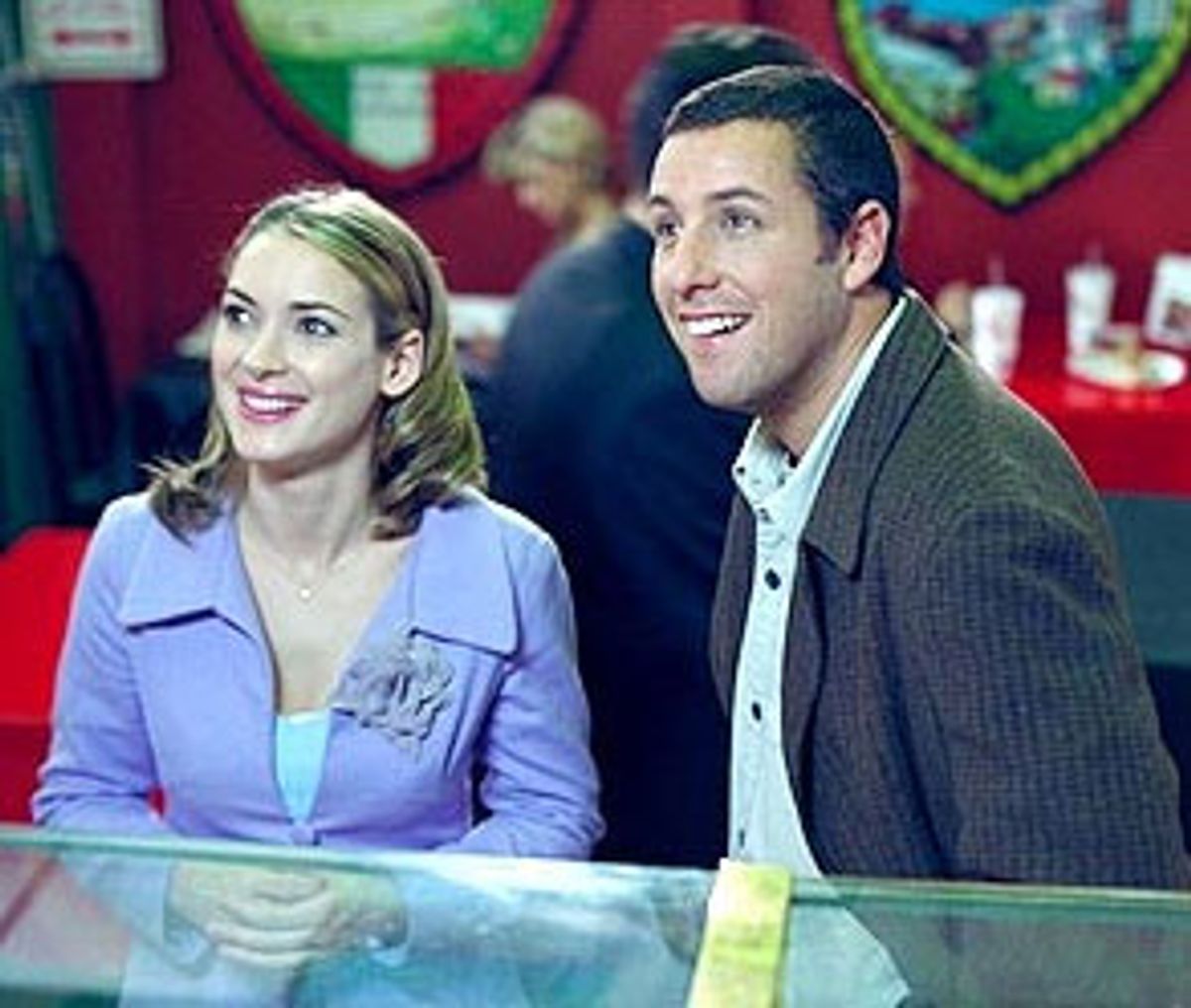 Two different people misheard me this week when I told them I was going to see the new Adam Sandler movie. Both of them looked at me blankly for a second and then said, "Oh. I didn't know there was a new Addams Family movie."

No such luck. If Gomez, Morticia and Uncle Fester were involved, this kinda-sorta-remake of Frank Capra's 1936 classic "Mr. Deeds Goes to Town" would be a lot more interesting than it is. Instead, this "Mr. Deeds" is constructed as a cheerful but almost wholly inert vehicle for Adam Sandler, who, implausibly enough, takes on the Gary Cooper role of Longfellow Deeds, the small-town Everyman who inherits a kazillion-dollar company.

Sandler strikes me as one of the odder celebrities of our age or any other. His stardom seems to result entirely from his regular-schlub qualities, from the idea that he's basically just Adam the sixth-grade class clown up there on the big screen goofin' around. He's the white man's answer to Martin Lawrence. Of course, Deeds, the sweet if rather dim New Hampshire pizzeria owner (or, in the original, Vermont tuba player) who refuses to let $40 billion change his life, is the ultimate regular-schlub movie hero. So having Sandler play him must have struck somebody somewhere as a genius notion.

But "Mr. Deeds" is all gooey marshmallow center with no firm, cakey outside. It offers some good actors and some genial comic riffs of the pointless-nonsense variety. (My favorite involves Deeds surveying Manhattan from his corporate helicopter and singing David Bowie's "Space Oddity," using a banana for a microphone.) It's also utterly predictable, thoroughly sentimental and -- worse -- not all that funny. It makes your average episode of "Third Rock From the Sun" look like the edgy mutant offspring of John Waters and Ingmar Bergman.

I don't really have a problem with Sandler, who is the star, the executive producer and general mastermind of this production. (Director Steven Brill and screenwriter Tim Herlihy are both his longtime collaborators.) But I like the idea of Sandler a lot better than I like his movies: He seems like a person of principle (refusing, for example, to cross an NBC workers' picket line to appear on TV a few years ago), he gives away a lot of money and he comes off in interviews as charming and frank about his unlikely success.

On some level, I can also appreciate Sandler's decision to remake himself as a purveyor of lightweight family entertainment ("Mr. Deeds" has no sex or nudity, maybe one cuss word and a little cartoon-style violence). There is something fundamentally bogus, however, about this movie's painfully earnest presentation of its plain-spoken, heartland-America values. It's fake sincerity, or maybe sincere fakery. I'm not saying Sandler is personally a hypocrite, just that he's clueless. He may really imagine himself as a kind of Deeds, an innocent lost in the world of Madison Avenue and Hollywood. He also seems to have no idea that a millionaire movie star with a degree from New York University might not make the most convincing spokesman for small-town simplicity.

You could argue that this is already way too much analysis for a Sandler movie, and you'd be right. The original Capra film -- scripted by Robert Riskin, like Capra's later and arguably better "Meet John Doe" -- is a tortured Depression fable, and its optimism and exuberant faith in the American character are balanced by its profound sense of social and economic anxiety. The Brill-Sandler-Herlihy "Mr. Deeds," on the other hand, wants to bounce off contemporary anti-corporate sentiment without becoming anything more than random goofballing.

Plot summary seems beside the point for a movie this generic: small-town boy meets big money meets bad people meets duplicitous gal who's lookin' for love in all the wrong places. Deeds runs a pizza parlor that looks less like one in a real small town than like one in a mall that's pretending to be a small town. He writes bad greeting-card poetry that the residents of Mandrake Falls, N.H., devour with glee, or at least with pizza and beer. ("Fifty years have passed by, with laughter and tears/ Do you remember when we went to the zoo and drank all those beers?") He insists on hugging people rather than shaking hands. He carries charming old geezers across the street like sacks of potatoes. I'm pretty sure that guy Sean Penn played in "I Am Sam" is his best friend.

Enter evil corporate honcho Chuck Cedar (Peter Gallagher, with evil corporate hairdo and overacting in place), who has to track down Deeds because of that fabulously rich great-uncle he never knew about who has just died and left him a broadcasting empire. (If he's so evil, why doesn't he just keep the damn company and never tell the oblivious Deeds anything about it? Oh, never mind.) Off we go to New York, where Deeds hangs out in his uncle's enormous apartment -- which looks more like a storage facility for second-rate antiques than a real dwelling space -- and parties with John McEnroe and the Rev. Al Sharpton.

Once in the big city, Deeds is hornswoggled by the feminine wiles of a babe named Babe (Winona Ryder), a tabloid-TV reporter posing as a small-town kid in order to ensnare him and get his story. I realize that Ryder has been in the news for other reasons lately, so people may be curious to see her utterly unmemorable performance here, executed without the least inspiration or comic flair. (Unlike, say, Elizabeth Hurley or Angelina Jolie, Ryder is a fundamentally serious actress who seems to lack the inner shallow bitch required to make such a character seem real or at least amusing.) Of course Babe, in her nice-girl persona as Pam, falls in love with Deeds and snuffles at her snarky Aussie boss (Jared Harris, playing the caricature with brio) that big-city people make fun of Deeds because "he doesn't share our sense of ironic detachment." Um, yeah, exactly.

Everything unfolds exactly as we know it will, and in a romantic comedy there's nothing wrong with that. But in that case a movie has to get by on its personality and its details, and this one just sort of sits there cheerfully on the couch, eating Pringles and threatening to give you a noogie. Other than the "Space Oddity" scene and a mildly satisfying moment when Deeds punches out a fatuous New York writer who resembles George Plimpton -- and who, out there in the Mandrake Falls audience, is supposed to get that joke? -- there isn't much in "Mr. Deeds" to keep a drowsy airline passenger awake.

John Turturro supplies some much-needed verve and flavor in a few scenes as Deeds' weirdly intense Spanish butler; if the role is a stereotype, at least it's striking and funny. Indie godhead Steve Buscemi, however, doesn't even try to make his cameo as a googly-eyed Mandrake Falls yokel interesting, and is hereby remanded to the custody of the We Network to play an endless series of alcoholic ex-husbands.

On one hand, Sandler and his cronies want to preach, in some vague and general way, against greed and dishonesty and urban pseudo-intellectualism. OK, fine. Then they want to surround Sandler with hipster movie stars like Ryder, Turturro and Buscemi to juice up his coolness quotient. The two things don't add up, or rather what they add up to is a slow-moving, not-funny comedy about small towns and big cities that winds up somewhere in between, stuck in the parking lot behind Home Depot.