"All About Lily Chou-Chou"

This electrified tale of teen alienation could launch the Japanese new wave out of the film-geek ghetto. 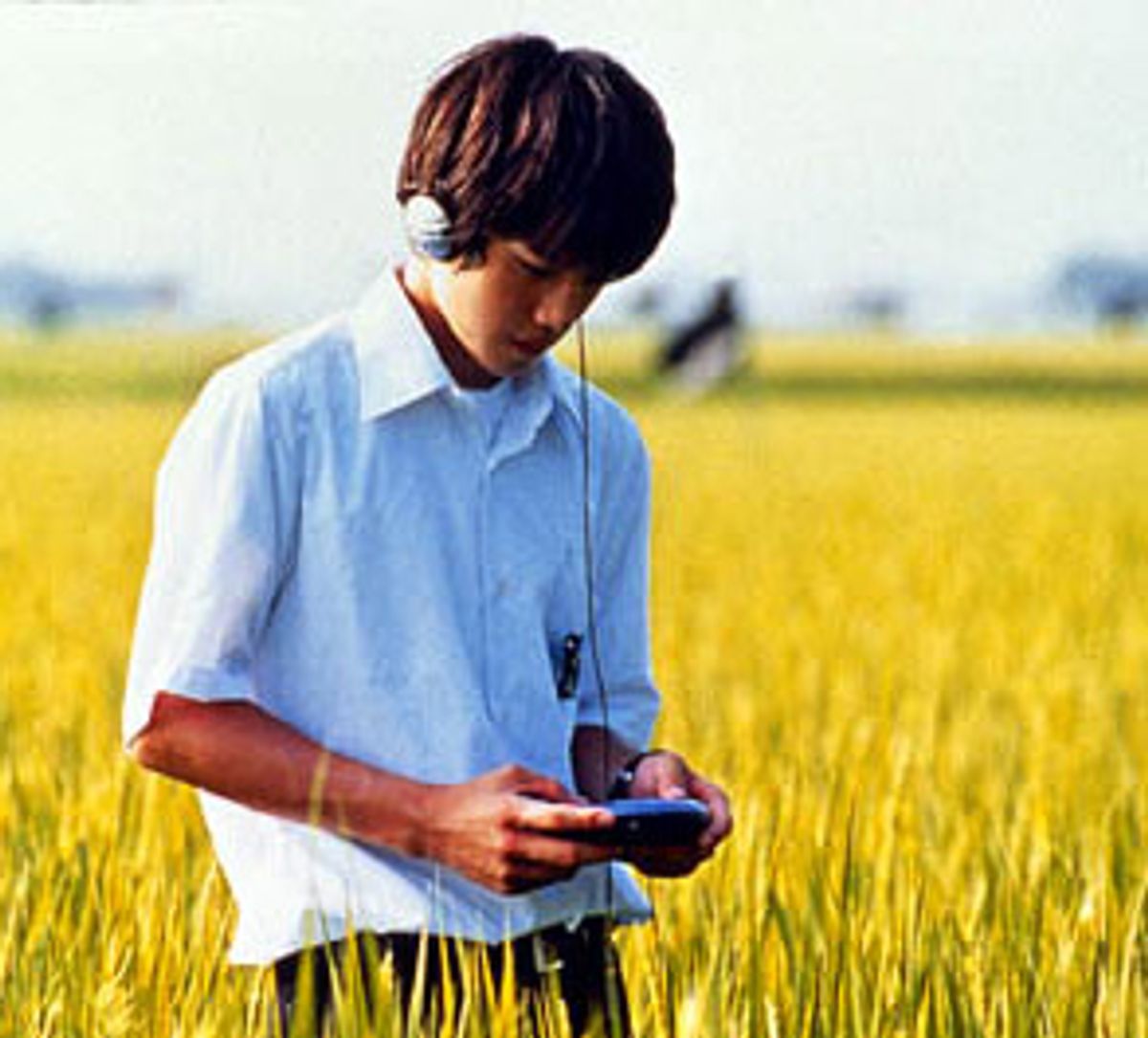 Something new, and pretty close to mind-blowing, has been brewing in Japanese cinema over the past decade or so. Younger filmmakers have begun to emerge who draw inspiration from a host of sources, including pop music, the French New Wave and traditional Japanese cinema, but hardly at all from Hollywood (beyond, maybe, Martin Scorsese and Nicholas Ray). I can't claim to have done more than stick my toes in the water -- mainly by sitting through Shinji Aoyama's remarkable three and a half hour "Eureka" -- but "All About Lily Chou-Chou," a sprawling and adventurous tale of teen alienation, might just be the movie that pushes the Japanese new wave out of the film-geek ghetto.

Or not. Like "Eureka," "All About Lily Chou-Chou" is arguably too ambitious, too all-encompassing and too concerned with flouting narrative convention for its own good. Then again, some of the same criticisms could apply to François Truffaut's "The 400 Blows," a movie that bears more than a passing similarity to this one. As that comparison suggests, I loved "All About Lily Chou-Chou" despite its problems, or at least I greatly admired its crystalline, high-definition video look, its explosive feel, its wealth of ideas, its willingness to go anywhere and do anything. If your taste runs to "difficult" films you absolutely can't miss it. (At this point, its United States release consists of one theater in Manhattan, so many of you may have to wait for home video.)

Writer-director Shunji Iwai is no kid (he's 39), but his movie has a youthful restlessness, an almost compulsive daring. It won't make any difference to American viewers, but the film itself is actually a continuation of a sort of online soap opera Iwai launched in Japan. For all that, the film's basic outline isn't especially confusing: "All About Lily Chou-Chou" is mainly the story of Yuichi (Hayato Ichihara), a moody, near-silent teenage boy who's obsessed with a pop singer named, yep, Lily Chou-Chou. Beyond that, though, things get murky.

Scenes don't always occur in chronological order, and some remain entirely mysterious. Two characters are killed and another is raped, and on all three occasions we basically have to infer (or guess) what has happened. For a while another boy, a charismatic, cruel James Dean type named Hoshino (Shugo Oshinari), seems to become the main character. Then there's a long sideways journey in the middle, when the film temporarily becomes a homemade video of an Okinawa vacation that ends with a near-drowning while the camera sloshes around haphazardly in the surf.

Iwai's portrait of Japanese high-school life is dense with compelling detail. In between his sessions in an online chat-room devoted to Lily -- rendered as a series of explosive intertitles that interrupt and sometimes overlay the action -- Yuichi must navigate a landscape of warring bullies and gangs, sadistic and seductive packs of girls and various grades of clueless, harried adults. Ichihara is a handsome, slight kid who can simultaneously convey curiosity and sullenness. If Yuichi is pretty much the classic wounded adolescent of world cinema, transposed to the age of chat rooms and digital video, that doesn't stop us from pining for a time when he will be less awkward and his life a little easier.

Indeed, as we gradually piece together, Yuichi is full of unresolved longing for a long-haired girl named Kuno (Ayumi Ito), a classical pianist who favors Debussy and is herself a pariah among the bitchy girl-cliques. I may be misinterpreting some of the ambiguous information in "All About Lily Chou-Chou," but it seems as though Kuno sat next to Yuichi one day in school and introduced him to Lily's music, but he's never gotten up the courage to talk to her since (although they may have communicated pseudonymously online). Like most of the film's characters, Kuno is eventually victimized by the dashing bully Hoshino, an enigmatic character who is cruel and violent without seeming entirely unsympathetic.

If the narrative progress of Iwai's film is sometimes baffling, what keeps you watching are his lustrous images and the complexity of his portrayal of middle-class Japan in decline. "Lily Chou-Chou" is clearly another entry in the cinema of globalization, whose main subject is the arrival of rapid change -- especially crime, social dislocation and the rise of commercial culture -- in previously traditional societies. I have no way of knowing whether its depiction of high school as an anarchic zone of terror, prostitution and bloodletting is more fact than fantasy, but the movie certainly dislodged my preconception that juvenile delinquency in Japan would be mild by Western standards.

I've never been bothered by the graininess and unstable color palette of digital video, especially as it is used by directors at the artier, or at least cheaper, end of the moviemaking spectrum. Iwai is almost certainly going digital by choice; he begins and ends the film with images of Yuichi against a field of sizzling-green grass, an electric hue perhaps only attainable in this format. He even films scenes at night, in which the characters react naturalistically to the single bright light atop his video camera, blinking and shielding their eyes. Somehow it works.

I suppose "All About Lily Chou-Chou" is at its heart making the oldest possible complaint about modern culture: that as it purports to bring people together it actually keeps them separate. Iwai isn't interested in Lily herself, who never appears in the film (and may not even be real); Lily and her pseudo-mystical domain, "the Ether," seem to symbolize a lost tranquility that may be the past or the future but definitely isn't the here and now.

Just as Yuichi can never talk to Kuno, the saucy Shiori (Yu Aoi), who's being pimped out to salarymen by Hoshino, can never tell Yuichi how much she likes him. About halfway through this puzzling, intermittently brilliant film, there's a scene that seems to summarize its themes of frustrated longing and unfulfilled desire. Yuichi is assigned by Hoshino to walk Shiori home, and she spends the whole trip repeatedly kicking him, and then races off the path to plunge into a muddy irrigation canal. When they reach her house, she stands dripping in the driveway while Yuichi shuffles away. On opposite sides of the hedge, they both lurk for a few moments, gazing at the ground, each hoping the other will do or say something. We can see them, from a distance, but they can't see each other.