Shaken confidence, lower interest rates, slow recovery: A new season of "Sex and the City" explores the darker side of serial monogamy and finds it's a bear. 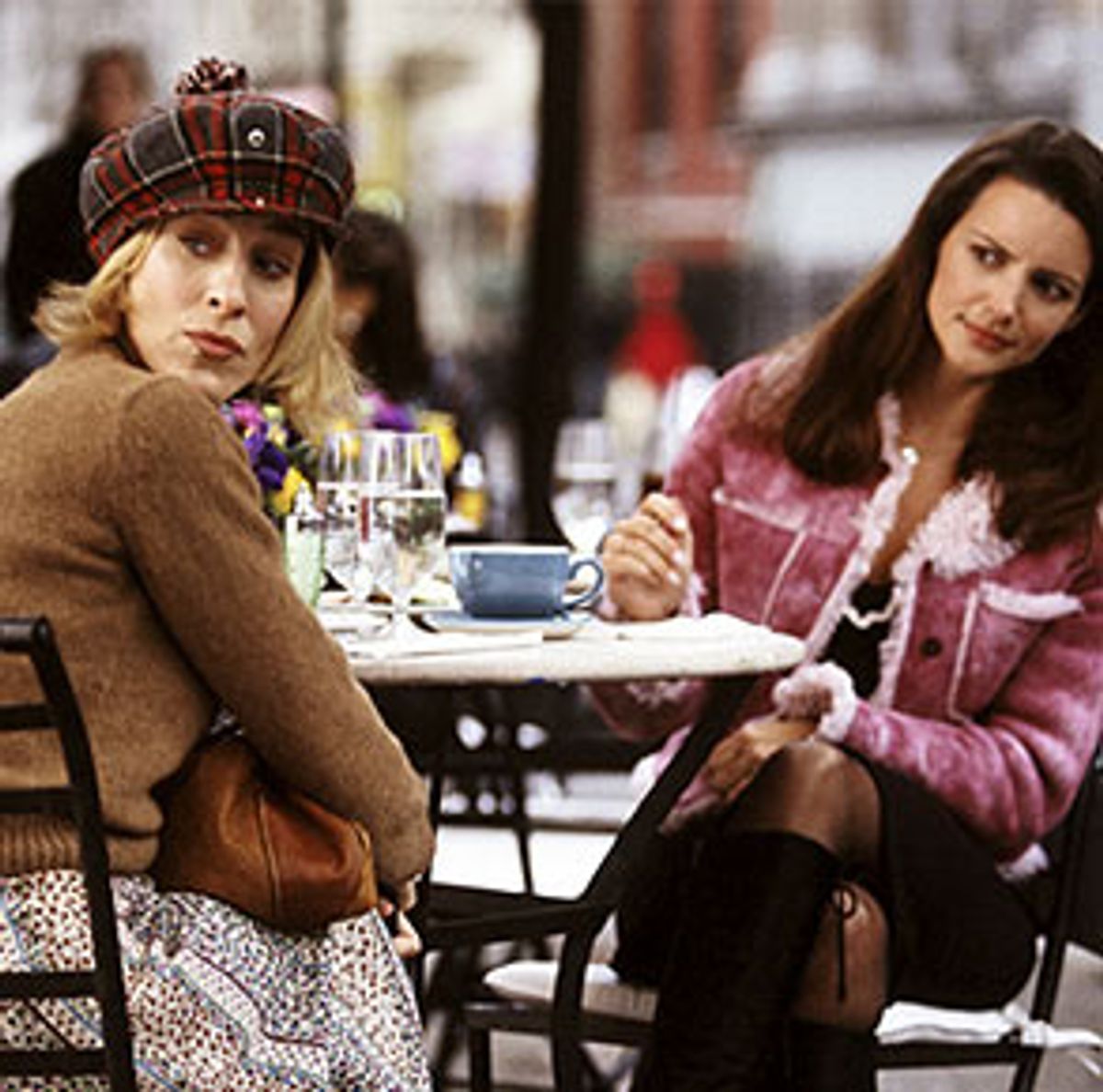 Given all the news bites "Sex and the City" has adapted into clever, romance-related coinages over the years, it's notable that Alan Greenspan's warning about "irrational exuberance" never made it into the show's vernacular.

Maybe it's because "Sex and the City," which premiered two years after the Fed chairman's speech, clung tenaciously to the gold-rush mentality for a full four seasons, despite the fact that it emerged near the end of the long boom. I'm not just talking about Carrie, Miranda, Samantha and Charlotte's spending habits, or the never-ending stream of lavish parties they attended or even their nearsighted tendency to borrow against the future. The show -- unlike the book it was based on, which knew better -- was exuberantly predicated on the idea of eternal love-plenty, the rebound, the eventual, inevitable hitting of the romantic mother lode. Not only were all four characters expected to strike it rich in this department, they believed -- as did their fans -- that they deserved to. It was part of their cultural patrimony as red-blooded, free-spending American girls.

Until this fifth season's glum and somewhat wrenching opener on Sunday, "Sex and the City" was, in a sense, the girly version of the bestselling CEO autobiography; a Horatio Alger story for the Manolo Blahnik set. For all the thorny interpersonal issues the show tackled in the first four seasons, it did so softly, as though with fluffy down pillows. "Sex and the City" has traditionally rushed to take the sting out of any love wounds it inflicted on its characters as swiftly as possible. It smoothed over its harsher insights with its own brand of painkilling salves. Had Carrie's aptly named Mr. Big not slipped away, he might have been the emotional equivalent of her first million. Even after it didn't work out, we got the sense that the next Big thing was just around the corner. In those days, it was. In fact, the only apparent explanation for Carrie's eventual breakup with Aidan was that he just wasn't Big enough.

In the old "Sex and the City," every bitter pill Carrie, Miranda, Samantha or Charlotte was forced to swallow was quickly chased down with a sweet, restorative shot of shoes, shopping sprees and Sunday brunches, as befitted an urban fairy tale. Even Carrie's catastrophic financial situation toward the end of the fourth season, following her breakup with Aidan, was handled prettily. Nothing as terrifyingly mundane as a mortgage application was ever needed to keep her from homelessness. When no bank in town would lend her the money she needed to buy her apartment, Charlotte became her fairy godmother, giving Carrie her down payment in the form of a huge, sparkly diamond ring.

With the exception of the eternally pessimistic Miranda, all the characters were irrationally exuberant, and Carrie, in particular, has always had a certain genius for it: mooning prettily around her apartment before settling down to write a perky, punny column making sense of it all, or flouncing into her girl-woman persona, the one so adorably innocent of things like loss, harm or irreversible damage. These mannerisms look particularly stark against the realities of a new era, and made Sunday's episode particularly painful. Whereas the World Trade Center attacks are referred to only obliquely -- the towers have been edited out of the opening sequence, and Carrie suggests a shopping spree as a way of pouring some much-needed money into downtown Manhattan -- the post-boom hangover hangs over the entire episode like a fog.

At the beginning of the episode, Carrie chirpily declares New York to be her boyfriend, then suffers one indignity after another in the form of dismissive cabbies, sudden storms, closed museums and restaurant managers who force single women to eat at the bar. At the diner, she sits next to a garishly made-up older woman who sprinkles lithium on her ice scream and tells Carrie that she used to be like her until she broke up with a man in 1982 because she thought something better would come along: "Never happened."

It doesn't help that Carrie has made herself up to resemble Harvey Fierstein on the set of "Hairspray." Or that she has just literally scared away a guy she tried to flirt with. Interest rates are low and may get lower (and in this analogy, that's a bad thing). A young sailor at a Fleet Week party tells her, later that night, that she reminds him of his mom.

Add to this the emotional damage of last season, and it looks as though the recovery will be slow and wobbly. Miranda is having a difficult time adjusting to motherhood, Charlotte to single life, Samantha to the prospect of committing to a monogamous relationship with a man who has already cheated on her. The ever-punning Carrie makes continuous reference to the ship that has sailed, even though she is still on it. Charlotte begins to question her fairy-tale notions of love and to take tentative steps toward separating love from sex. Samantha's first foray into monogamy gets off to a particularly toxic start.

In their own way, Carrie and Co. are facing what a New York Times editorialist recently called a "decade of deficits." With the exception of Miranda, who has gained a son (but seems primarily preoccupied with losing her friends as a result), the "Sex" girls seem to be blinking at their balance sheets, adjusting their projections, trying to square their accounts.

Taken together, these changes are a welcome relief, but also somewhat disconcerting. "Sex and the City" has always been touted as original, brave and, in the words of HBO's marketing department, "groundbreaking." Personally, I never thought the blow-job brunch talk or Samantha's salacious vocabulary was all that. It wasn't women talking frankly about sex, but women talking frankly about sex on TV that made it noteworthy. But this season, with its frank talk of the possibility of a lot less sex, promises to be far more audacious.

Hbo Sex And The City Television