"Signs," the latest supernatural chiller from M. Night Shyamalan, shows once again he's a master of terror. But he wants to be a shaman, not just a showman. 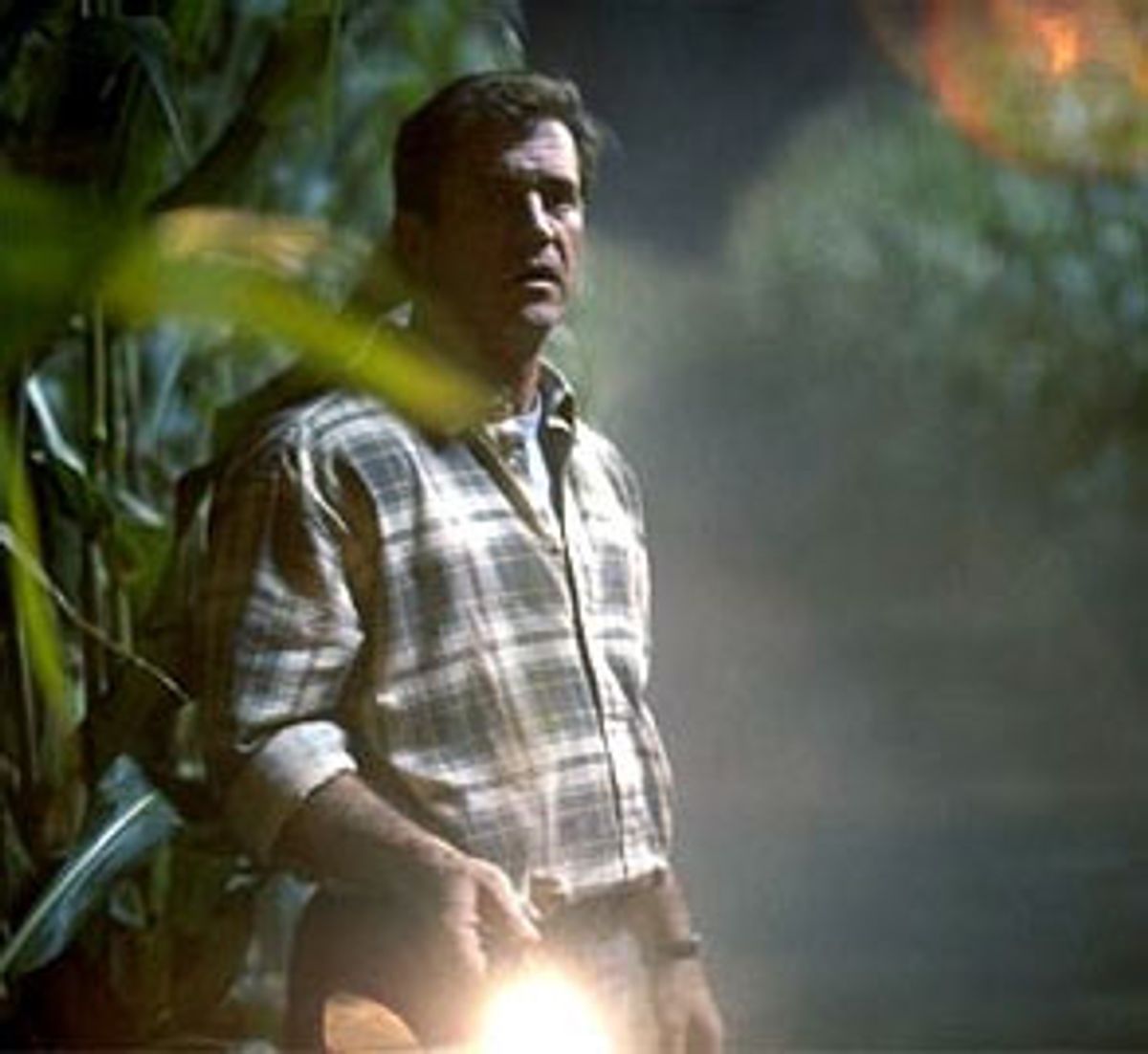 M. Night Shyamalan does spooky thrills and chills better than any other Hollywood filmmaker to emerge in the last two decades. If he's not quite the legitimate heir to Alfred Hitchcock and the young Steven Spielberg that he thinks he is (and he's not, at least not yet), Shyamalan will nonetheless pack the multiplexes this weekend with hordes of eager victims ready to scream and leap from their seats for his new "Signs."

Yeah, Shyamalan knows how to scare us, all right. (Even on a scratched-up DVD from my neighborhood video store, "The Sixth Sense" had me pulling the couch cushions over my face.) And on that front "Signs" will not disappoint: We've got a wounded American family, an isolated farmhouse, a cornfield full of hieroglyphic crop circles, and some things that go bump in the night and don't seem all that friendly. Shyamalan is already a master of such tricks as odd low-angle and high-angle shots, subtly distressing details (a swing seat wobbling when there's no wind) and overly amplified ordinary sound (the woman sitting next to me squealed every time the family's German shepherd barked).

But what's scaring him? All three of Shyamalan's big-budget Hollywood movies (also including "Unbreakable") are tremendous mood pieces that build an intensely creepy atmosphere, winding the audience up to a pitch of near hysterical suspense, and then squander it all in promiscuous geysers of sentimentality and random New Age brain fog. Two things come to mind: One, Shyamalan is a clever craftsman trying to conceal the fact that he has nothing to say. Two, he's scared of God.

It wouldn't seem that both things could be true, but given that "Signs" is a movie about faith and miracles, maybe they are. This film flirts with religiosity more ardently than either "The Sixth Sense" or "Unbreakable," but finally never gets out of that pop-spirituality territory Shyamalan has made so uniquely his own. It might be a better movie if it did -- if we believed that its creator had a specifically Christian or Hindu or Muslim or, I don't know, Zoroastrian point of view from which to address the Great Questions of Existence. (It may or may not be relevant to observe that Shyamalan himself is a product of two cultures; he was born in India and raised in suburban Philadelphia, where he went to an upscale Episcopalian school.) Instead, we get vague, pseudo-universal nostrums: The world divides into two kinds of people, those who believe in coincidences and those who believe in signs.

Graham Hess (Mel Gibson) claims to be a member of the first group, a hardheaded realist who thinks we're all alone in a purposeless universe. He's an Episcopalian priest who abandoned his faith after his wife was killed by a dozing driver and now lives with his brother Merrill (Joaquin Phoenix) and his kids Morgan (Rory Culkin) and Bo (Abigail Breslin) on their Pennsylvania farm.

When huge flattened circle patterns begin to appear in the Hess cornfield and thousands of other places around the world, followed rapidly by the arrival of floating lights in the sky over the major cities of the globe, we know what's coming: Graham must engage in a manly wrestling match with his inner demons and his Creator, and we're trapped in a remake of about seven sci-fi movies at once. The central narrative mystery of "Signs," rather disappointingly, isn't the question of who's behind the crop circles (that becomes clear pretty fast) but of whether Graham will recover his faith, learn to love life again, and weep masculine tears while hugging his children. (You get one guess.)

The wholesale homage to earlier films found in "Signs" is a new and not necessarily welcome development in Shyamalan's work. Those viewers who notice how much of the movie is imported from "Close Encounters of the Third Kind," "Night of the Living Dead," "War of the Worlds," "Poltergeist" and "The Birds" (not to mention "Field of Dreams") may find themselves distracted from the things in it that actually work.

Shyamalan has a justified reputation as a fine director of actors, and he gets a fresh performance from Gibson here as a reticent, depressed widower whose love for his family is nearly matched by his bitterness; the star's trademark twinkle and action-hero mannerisms are largely absent. As in "The Sixth Sense," the director has a distinctive feel for the terrors of childhood. Culkin is the movie's linchpin as Morgan, the first member of the family to understand what's about to happen to them, and when Breslin, an unsettling little cherub, is onscreen you can't keep your eyes off her.

For the first half-hour or so, the story is brilliantly handled, even if almost all its elements belong to the American-nightmare back catalog of Spielberg and Stephen King. When Gibson chases a mysterious intruder through the 9-foot corn stalks, the ground mist, strange chattering noises, and half-glimpsed maybe-critters will have you hopping like a caffeinated bunny rabbit. There's also an unstable comic undercurrent to the film that sometimes clicks, as when Morgan persuades both his sister and his uncle to wear aluminum-foil hats that make them look like overgrown Hershey's Kisses, "so the aliens can't read our minds."

But good as Shyamalan is at atmosphere and extracting downbeat performances from stars, he's fatally weak when it comes to pacing and expository dialogue. We seem to go in a matter of minutes from bizarre signals coming in on a leftover baby monitor Morgan is using as a walkie-talkie (a Spielberg-King device if I've ever seen one) to a full-on attack of the Green Uglies. Shyamalan can offer nothing to convey the sense of worldwide calamity except some badly simulated TV news coverage that suggests he hasn't watched CNN since at least the Gulf War.

I shouldn't get specific about what actually happens in the latter stages of "Signs," except that the family locks itself in the basement while the Whoevers try to get in, as in any number of previous horror films, and that there's a lot of flatulent talk about prayer and miracles. (Graham swears he no longer believes in them, although of course his laconic brother -- well played by Phoenix as a good-natured, washed-up ballplayer -- knows better, as do we.) And that when it comes right down to it I've seen better costumes at office Halloween parties.

Shyamalan's title is itself an overly labored double-entendre. The crop circles are apparently road signs meant for the arriving spaceships, but the word also has a specific meaning in Christian eschatology: Signs can be miracles to show that God loves us, or indications that the End is at hand. Once again, the filmmaker gets incredibly wobbly at the end of his story, and his resolution of both the alien incursion and of Graham's crisis of faith feels more like a cheap trick than the product of a genuine belief in anything at all. Shyamalan is a considerable talent, but he's become too powerful too young. The sign I discern hanging over his career at the moment reads Wrong Way.