The filth and the fury

Conservative watchdogs at the Parents Television Council now have scientific proof: Sabrina is better for your kids than Buffy! And "Doc," starring Billy Ray Cyrus, is the best show on TV. 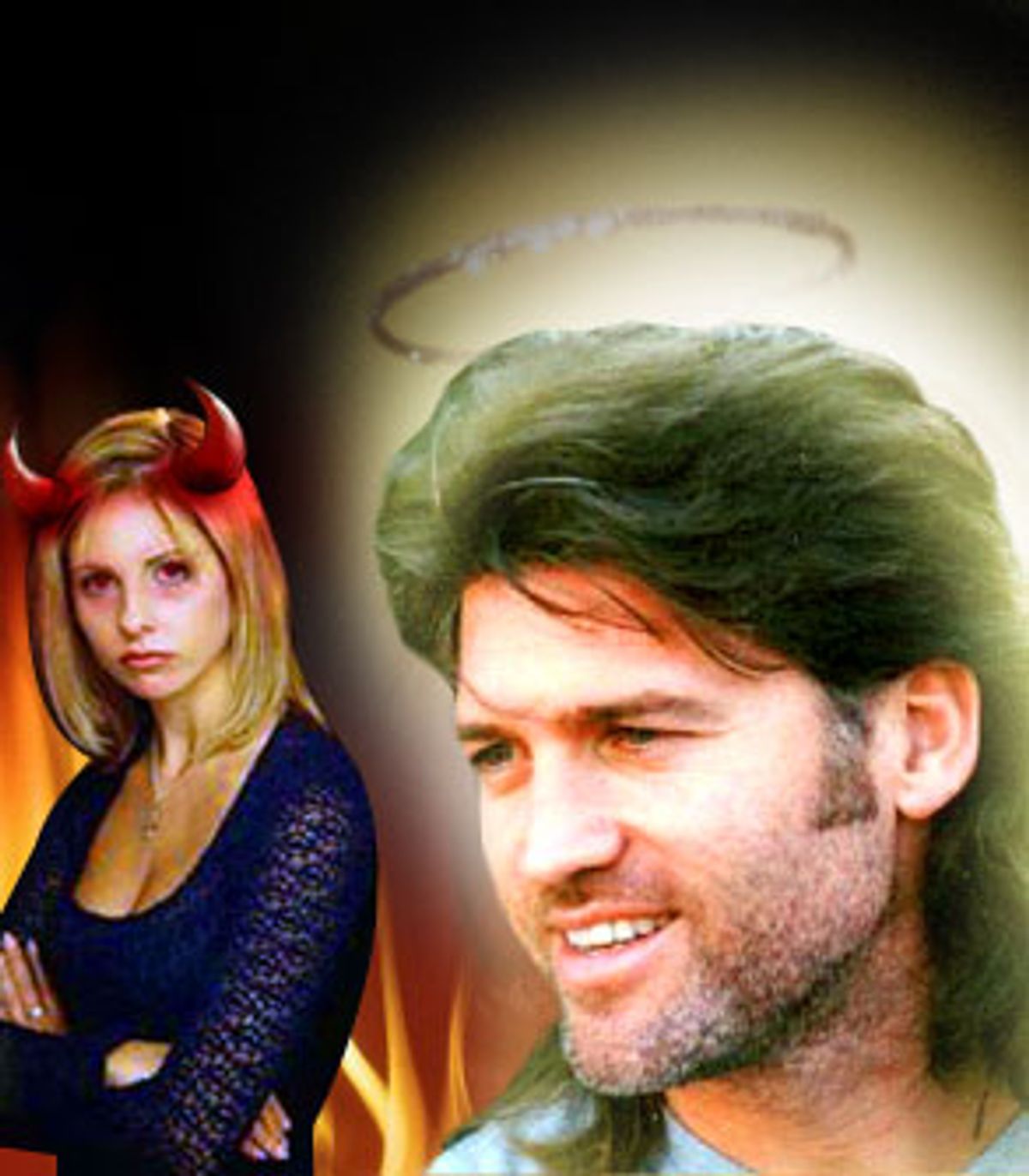 In 1987, a group of "determined young conservatives" founded the Media Research Center with the intention of proving, "with sound scientific research," that "liberal bias in the media does exist and undermines traditional American values."

With this aim in mind, the group's founder and president, L. Brent Bozell III, developed the News Tracking System (NTS), "a custom-designed computer database and archiving system that today provides the conservative movement's now thriving media personalities and the public alike, with the evidence necessary to confront the liberal media."

The MRC backs and shares a president with the Parents Television Council, a group founded in 1995 that aims to bring "positive, family-oriented television programming" back to the small screen. The PTC calls itself "a non-partisan, non-profit, grassroots organization" with no particular religious affiliation. ("We have Sen. Joe Lieberman on our board!" says Lara Mahaney, the group's director of external affairs.) Last week, it released its annual Top 10 best and worst network TV shows.

And what a brave, new and incredibly dull alternative TV universe it is.

It might seem at first glance that the PTC has gone out of its way to avoid putting anything even remotely watchable on its 10-best list. But things aren't quite that simple. "Bernie Mac" is indeed a fine show, though "unfortunately," as the PTC's Web site laments, "episodes frequently feature offensive language such as 'ass' and 'damn' and some sexual innuendo." I, too, could live without "CSI," "Off Centre" and WWE's "Smackdown!" But praise for the "best" shows seems to rely heavily on the word "inoffensive" -- not a term I would use to describe "Baby Bob." And angels, ministers, large families and small-town people in cowboy boots who like to go around imparting solid moral foundations do seem especially well represented.

But maybe I'm jumping to conclusions. Maybe it's not so much an urban vs. rural, Christian vs. heathen thing, or a nuclear family vs. promiscuous single mother thing, as it is an attitude thing. For example, while "Buffy" gets a thumbs down for "its graphic violence and sex, often mixing the two with an underlying occultist element," "Sabrina the Teenage Witch" gets a big thumbs up for focusing "on the daily struggles of a cheerful teenager who just happens to be a witch." (Italics mine.) "Sabrina" was also lauded for emphasizing "the importance of fulfilling one's academic potential, loyalty in friendship, social responsibility and 'clean fun' as being the most fun." Judging from what I saw of "Doc," I'd say that last point is arguable.

According to Bozell, the PTC's lists prove beyond all doubt that "the networks have a long way to go before parents can be assured that their children will not be bombarded with filth during prime-time."

How exactly does the PTC do it? With the help of the "custom-designed Entertainment Tracking System (ETS) ... the only database of its kind in the world," which the PTC "uses to produce unique research and publications focusing on a variety of topics relating to the content of prime-time television." Thanks to the ETS, it has been conclusively scientifically proven that "Sabrina the Teenage Witch" is better for your kids than "Buffy the Vampire Slayer."

Mahaney explains how it works: "We tape every show on the broadcast networks that air during prime time. Then we have an analyst that watches each network. For every show they will log for content: sex, violence and language. And then they'll also break down those categories into sub-categories. For example, if it's sex, is it sexual innuendo? Is it an actual act of sex?"

This is no cursory glance at the tube. The main page of the PTC's Web site includes a Flash-animated header, news-scroll style, cataloging the networks' many transgressions during "family hour" (8-9 p.m.).

On my last visit, I was informed that a recent family hour included "157 sexual situations and/or dialogue, 67 violent incidents and 68 uses of foul language."

After each sexual instance and off-color word has been dutifully logged, Mahaney explains, "six or seven different analysts ... meet regularly once a week to discuss what's going on at the networks, and then two or three go over the Top 10, determining which are the best and the worst."

Those hoping to avoid inclusion in the "worst" list would do well to avoid content such as is listed on the PTC Web site:

1) "Buffy the Vampire Slayer" (UPN): "The most offensive sexual content consisted of graphic sex scenes between Buffy and Spike -- some of which had violent overtones ... Offensive language has included uses of 'bitch,' 'bastard,' 'hell,' 'damn,' 'ass' and 'piss.'"

4) "Friends" (NBC): "Much of the show's humor stems from sexual references or sexual situations. Episodes contain frequent references to the characters' promiscuous lifestyles, and frequently refer to pornography and kinky sexual practices ... Unmarried Rachel had a baby with Ross, the result of a one-night stand ... The show frequently uses strong language like 'bitch' and 'ass.'"

The "best" list is arrived at in similarly methodical fashion.

"You look at content, language, etc.," says Mahaney, "but you also look at the themes, how they are handled. It's not that '7th Heaven' or 'Touched by an Angel' don't deal with tough themes. It's how they deal with those themes. In our opinion, it's responsible, not something that's gratituous. Or even 'Sabrina the Teenage Witch,' she'll deal with different things, but there's always a very positive message at the very end."

Pax's "Doc," in a similar vein, "consistently reinforces family-friendly themes such as honesty, compassion, hope and reconciliation" and is "consistently devoid of offensive language, violence and sexual content." The show stars country singer Billy Ray Cyrus (of "Achy Breaky Heart" fame) as Clint Cassidy, a small-town doctor with a mission -- not to mention a mullet -- as big, warm and furry as his heart. "Doc" comes to the Big Bad Apple for "love interest," but stays to lend a human touch to an HMO. With his "homespun values and friendly disposition, which provide a contrast to the jaded and impersonal city," Clint "refuses to let his harsh environment harden him." Not surprisingly, "'Doc' has been recognized for its pro-faith themes, earning Movieguide's 'Faith and Freedom' award for consistently teaching Biblical principles."

The PTC claims that its mission is to bring responsibility back to the entertainment industry. "Our main concern is entertainment that is marketed to children or is presented at an early evening time when children or teenagers might be watching," says Mahaney. (This does not explain the group's ardent campaign against FX's "The Shield," which airs at 10 p.m.) Though the PTC admits that responsibility for what children watch is "four-pronged" (that is, divided between parents, networks, advertisers and watchdog groups), it is not immune to overzealousness in pursuit of good, clean, sort-of-Christian and mind-bendingly dull entertainment.

It isn't above admitting when it makes a mistake, either. Recently, the group fingered "Smackdown!" as responsible in the deaths of four children, including 6-year-old Tiffany Eunick, who was killed by 12-year-old Lionel Tate in 1999. Bozell later retracted the PTC's statement, apologized and paid $3.5 million in damages when it was found that young Lionel had, in fact, been watching "The Flintstones."